GNU R can be run on the Linux operating system in a number of ways. In this article we will describe running R from the command line, in an application window, in a batch mode and from a bash script. You will see that these various options for running R in Linux will suit a specific task. Some of them are more suitable for simple statistical analysis that can be done in one line of code, others for more sophisticated programs that require executions of a larger number of R expressions. Finally, we may want to run a program that will take a day or two to run on a Linux cluster. In this case we will run R in a background, which allows us for logging out from the cluster.

Probably, the simplest way to run R under Linux is to run it from the Linux command line. That is,

As a result of this command the following appears:

The above shows the version of R installed on your Linux platform. It also provides a few commands, which are build in to assist you with help. We will not elaborate further on these help command as we will deal with them in later articles. At the moment, we would like to point out that in order to exit R we simply type:

This will give us additional option to save the workspace image:

This way of launching R is more suitable for shorter statistical analysis, which do not involve execution of a large number of R commands.

Running R in an application window under Linux

An application widow for R under Linux is similar to a graphical user interface used on other platforms. Type:

to launch R in an application widow. The figure below shows such widow under Linux. 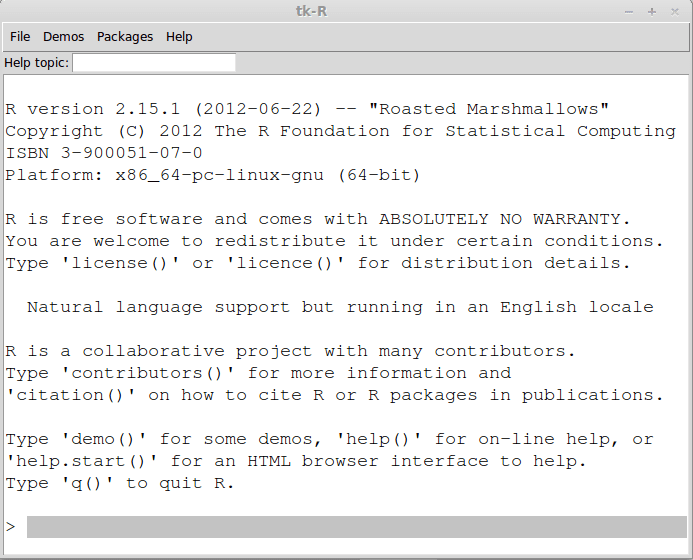 The menu in the tk-R application window gives you a few options. These are, installing and loading packages and sourcing code from files. It includes also some demo examples as well as access to R help. Basically, what we can see in the figure above is the R console. The application window lacks a toolbar as seen on other platforms. However, the R console itself allows you to type expressions (commands), which are then interpreted by the R system and the response is output on the screen. The application window is similar to running R in a Linux command line. Similarly as before, we would not run a large number of commands in the application widow. The following two ways of running R allow us for such more complex implementations.

Running R in a batch mode in Linux

Running R in a batch mode in Linux provides a way to execute a large set of commands in sequence and save the results to a file. Let us now create our first function in R and save it in a file called r-example-function-1.R. This function will load some data from a file then apply an exponential function to the data and save the output in the corresponding file.

In the first step produce the r-example-function-1.R file including

You can now run the commands included in the file r-example-function-1.R in a bash mode as follows:

Running R from a bash script in Linux

Running R from a bash script in Linux involves writing a bash script including R functions and then calls to these functions. For instance, create a file called r-bash-example.sh as indicated below

Now, make this file executable by

To run the R function included in this file type

Note that it is also possible to execute such script in the background on, for instance, Linux cluster by

This allows you to log out the cluster and leave the program running. Note, that this will, additionally, produce an R output file: nohup.out.

This article only scratches the surface of the possibilities of running R. For example, R can be integrated with other programming languages such as Java. Moreover, analysis obtained by R software can be integrated into a web application.