If you’ve heard of Linux, you’ve probably heard of Ubuntu. Out of any distribution, it’s likely the most well known. Ubuntu has a solid reputation for being user friendly to newcomers. Couple that with the endless support you’ll find online, and you’ve got an operating system that anyone can pick up and use. For other most popular Linux distributions please visit our dedicated linux download page.

That’s not to say that other Linux distributions aren’t user friendly. Many are, but there are more than a few that are geared towards power users and system administrators. Ubuntu strikes a nice balance between the two by catering to casual users and still packing the power that enterprises need. Oh, and it’s completely free!

Ubuntu is developed by Canonical and has been around since 2004, enough time to gain a strong footing among the greatest distributions. Ubuntu is based on Debian, a true behemoth among Linux distributions that precedes Ubuntu by more than 11 years.

If you’re ready to give Ubuntu a shot, there are a few things you should know before downloading it. Ubuntu has a few different editions available and about half a dozen official variations that Canonical dubs “flavors.” We’ll take a look at all these options below.

First, let’s get you familiar with how Ubuntu versions are released. Canonical releases interim versions (think of them as preview builds or beta versions) every nine months and LTS versions (Long Term Support) every two years.

Long Term Support releases are tested, stable, and secure iterations of Canonical’s beloved Ubuntu operating system. This is the version you’ll want to use. They retain support and updates for the next five years after release, but you’ll be able to upgrade to a newer LTS version long before that.

Interim releases are inherently short-lived, only receiving updates and support for nine months. Unless you need to test upcoming features and can’t wait for the next stable LTS release, just avoid them. 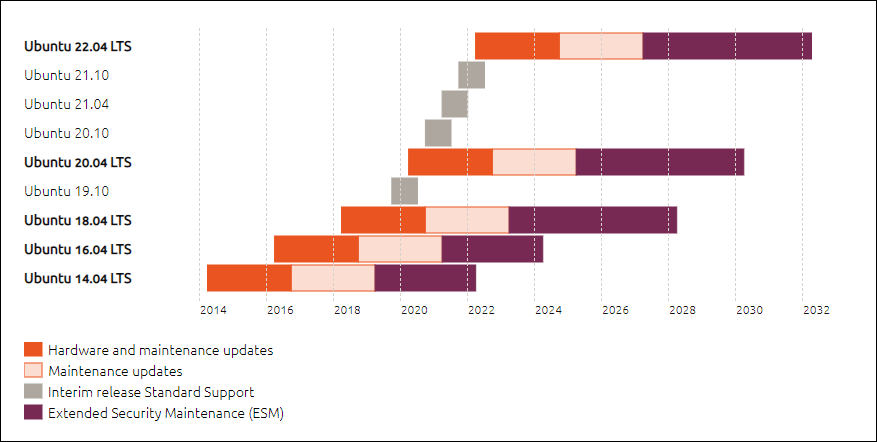 There are two main editions of Ubuntu available: Ubuntu Desktop and Ubuntu Server. Selecting the correct one for yourself should be very easy. Do you want to run a graphical user interface (GUI)? If yes, then you should grab Ubuntu Desktop. On the other hand, if you just want a command line interface (CLI), you’re looking for Ubuntu Server (which we cover below, so scroll down to that section).

When you download Ubuntu Desktop, you’ll get an ISO file that has Ubuntu preloaded with GNOME desktop manager and its related applications. This is Ubuntu’s default graphical interface and choice for downloads. In the vast majority of situations, this will suffice just fine and you won’t need to look any further into other choices.

Kubuntu is mostly the same build, except that Ubuntu will come preloaded with the KDE Plasma Desktop graphic environment instead of GNOME. KDE and GNOME are both very popular choices for desktop managers. If you happen to prefer KDE over GNOME, it’d be a lot easier to download Kubuntu than have to download the default version and go through manually uninstalling GNOME and loading KDE.

To download Kubuntu, you can navigate to Kubuntu’s download page and select the latest LTS or interim release.

Lubuntu is a lightweight version of Ubuntu that is built to be less resource intensive than normal Ubuntu. It uses the LXQt desktop environment instead of GNOME. This makes it an ideal install for older systems. These days, even normal Ubuntu can run fine on almost any system you can find, so Lubuntu’s main advantage is in its modular design and alternative interface. Like most of the other flavors, it just comes down to preference.

Ubuntu MATE uses the MATE desktop environment, which aims to be more lightweight and practical than Ubuntu’s default GNOME environment. As with a lot of the other flavors, it mostly just comes down to user preference.

Ubuntu Studio is all about multimedia production. A big focus of this flavor is to provide the user with applications for audio, video, and graphic editing. If you are a creative type that needs access to those types of programs, Ubuntu Studio will come with all of them pre-installed and ready to go.

Head over to Ubuntu Studio’s download page to grab an ISO installer image.

The Xubuntu flavor comes with Xfce desktop manager installed in place of Ubuntu’s default GNOME. It’s mostly a cosmetic change, although Xubuntu claims to provide extra responsiveness and speed to the default Ubuntu Desktop OS. It’s been officially supported by Canonical for a long time and is a solid alternative to the default download.

Check out Xubuntu’s download page for the latest ISO images.

Ubuntu Kylin is the Chinese version of Ubuntu. This will only be relevant for you if you are comfortable with Chinese and feel that your productivity will be improved if your operating system is in Chinese.

Like its desktop counterpart, Ubuntu Server is a very popular choice among Linux users. You’ll mostly find it powering servers in data centers or other enterprise environments, as that’s what it’s made for. If this is out of your depth, consider sticking with the Ubuntu Desktop edition.

Bear in mind that Ubuntu Server comes with no graphical interface and the developers assume you know what you’re doing. Still, Ubuntu’s ease of use is apparent even on the Server edition. The amount of support and documentation you’ll find available online is also hard to rival.

Ubuntu also has downloads and documentation available for specific devices, like the Raspberry Pi, Intel NUC, and other small form factor PCs and IoT devices. Canonical has put in the research and partnered with the right companies to bring you recommendations about what Ubuntu OS to download for each device.

If you are using any small form factor PC or IoT device, it’s definitely worth checking out Ubuntu’s download page to see if they have some specific recommendations available for your device.

It’s hard to go wrong with Ubuntu. It’s the only distribution to become nearly synonymous with Linux in some contexts. That’s just how popular it is.

With different editions and a multitude of flavors available, there’s something for everyone in Ubuntu and its derivatives. If you’re new to Linux, it’s a great distribution to start with. You won’t regret trying it out.