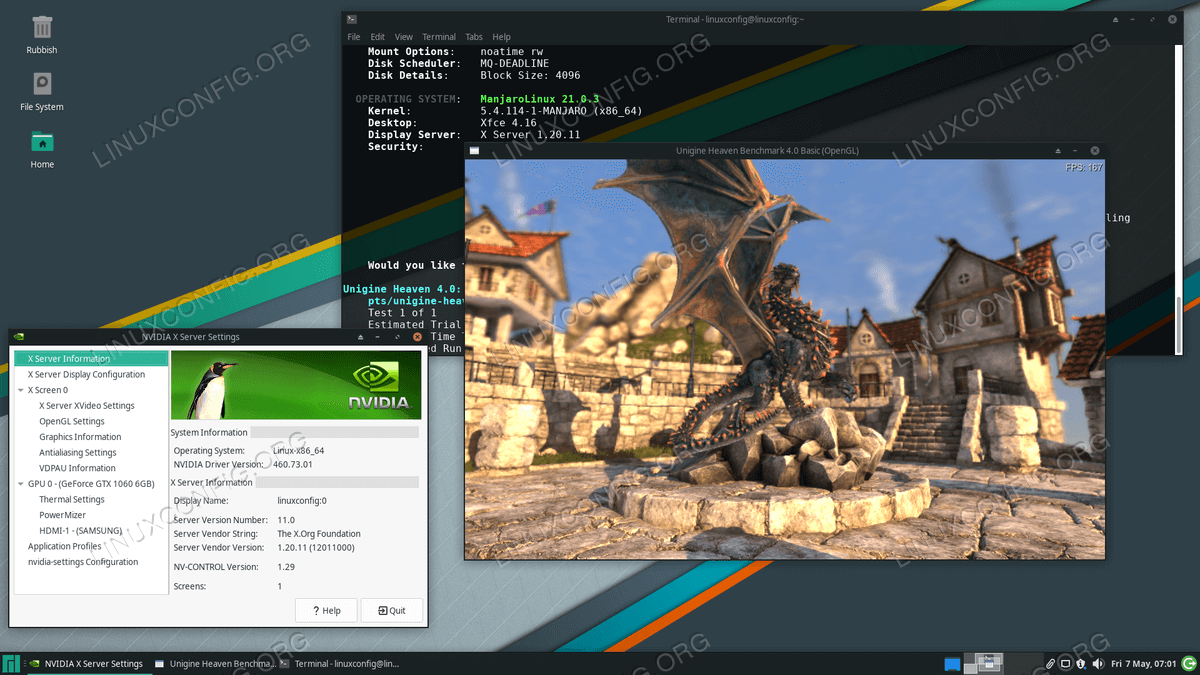 How to install the NVIDIA drivers on Manjaro 21 Linux

The objective is to install the NVIDIA drivers on Manjaro 21 Linux. This article will discuss two methods of Nvidia driver installation in the following order: To install Nvidia driver on other Linux distributions, follow our Nvidia Linux Driver guide. How to install Phoronix Test Suite on Manjaro 21 Linux

If you manage more than one computer, you may have wanted, at one point or another, a “remote keyboard,” a “remote mouse,” and a “remote screen” for that far-away computer, even if it is just up or down the stairs in your house.

VNC (Virtual network computing) can help here. Think about it as your screen, a keyboard, and a mouse at a remote workstation, controlled via the network and quite usable in terms of speed, even on somewhat slower connections.

A VNC setup usually consists of two or more computers, where the computers which need to be remotely controlled run a server (the VNC server) and the clients which need to connect to it (with the possibility to do so simultaneously in many cases) running a client (the VNC client(s)). How to install the NVIDIA drivers on AlmaLinux 8

In this article we will be perform an installation of the NVIDIA Driver on AlmaLinux. Nvidia driver is needed by your NVIDIA Graphics GPU to function with better performance. To do this we are first going to identify your NVIDIA graphic card, download an appropriate NVIDIA driver , disable the default nouveau driver by modifying the GRUB boot menu and finally install a official NVIDIA driver. 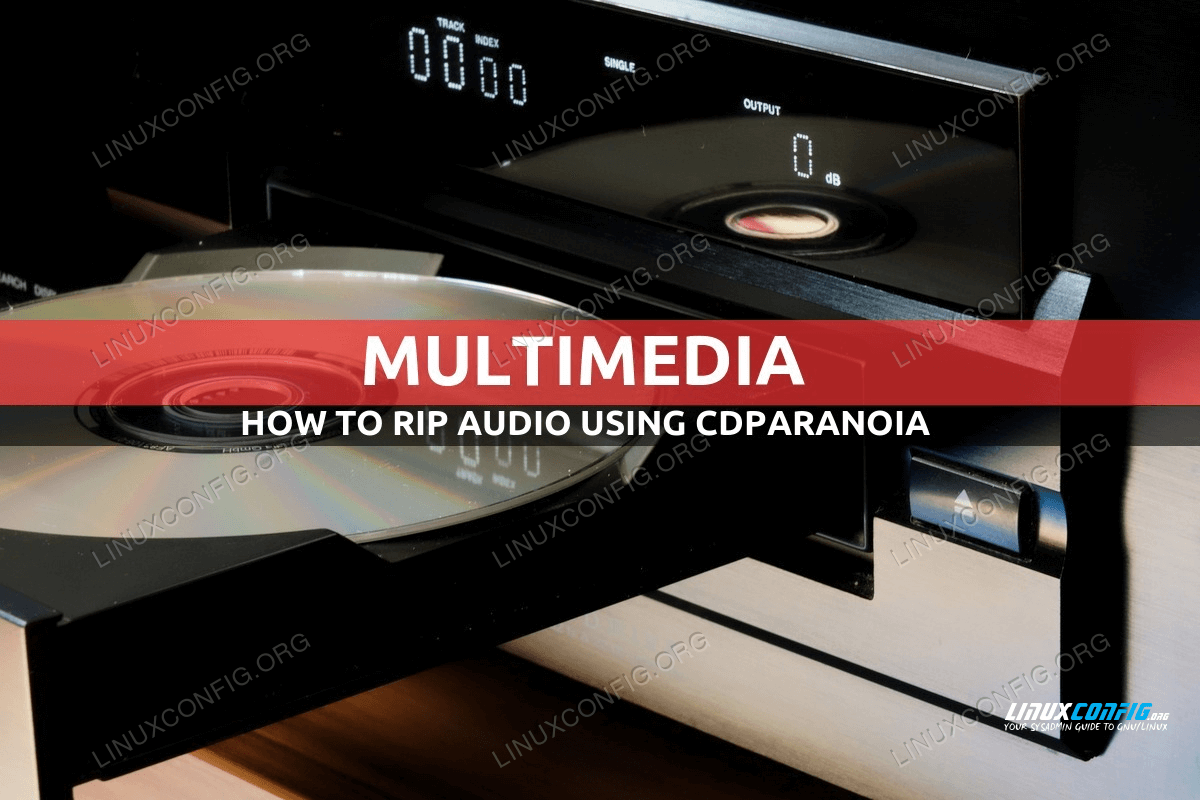 Nowadays we are surrounded by devices able to read digital audio, and there are many services such as Spotify which allow to stream content legally. However if you like to buy music on physical support (compact disc), you may want to extract the audio tracks so they can be used on your smartphone or favorite device, or just for backup purposes. There are man tools on Linux which can be used to accomplish such task, but in the vast majority of cases they are just frontend to cdparanoia. In this tutorial we will learn how to use this tool.

Nowadays a lot of video sharing platforms exist online. Some are really popular, like Youtube , and others are a little more “obscure”. Different types of content can be found on these platforms, but is not always possible to download them via the native web interface. In this tutorial we will see how to use a small command line utility: youtube-dl. This command line utility is able to download said videos for us using a very simple syntax. The following tutorial aims to demonstrate the capabilities of the program, however it should be used only where appropriate, in order to respect copyright laws. Cmus is a fantastic ncurses-based music player written in C. It can be used on all Unix-based operating systems, and so also on Linux. It has a series of very nice features like gapless playback, and supports a variety of file formats; among the others: Ogg Vorbis, MP3, FLAC, Opus, Musepack, WavPack, WAV, AAC, and MP4. It also support adding features via extensions. In this tutorial we will learn its basic usage. 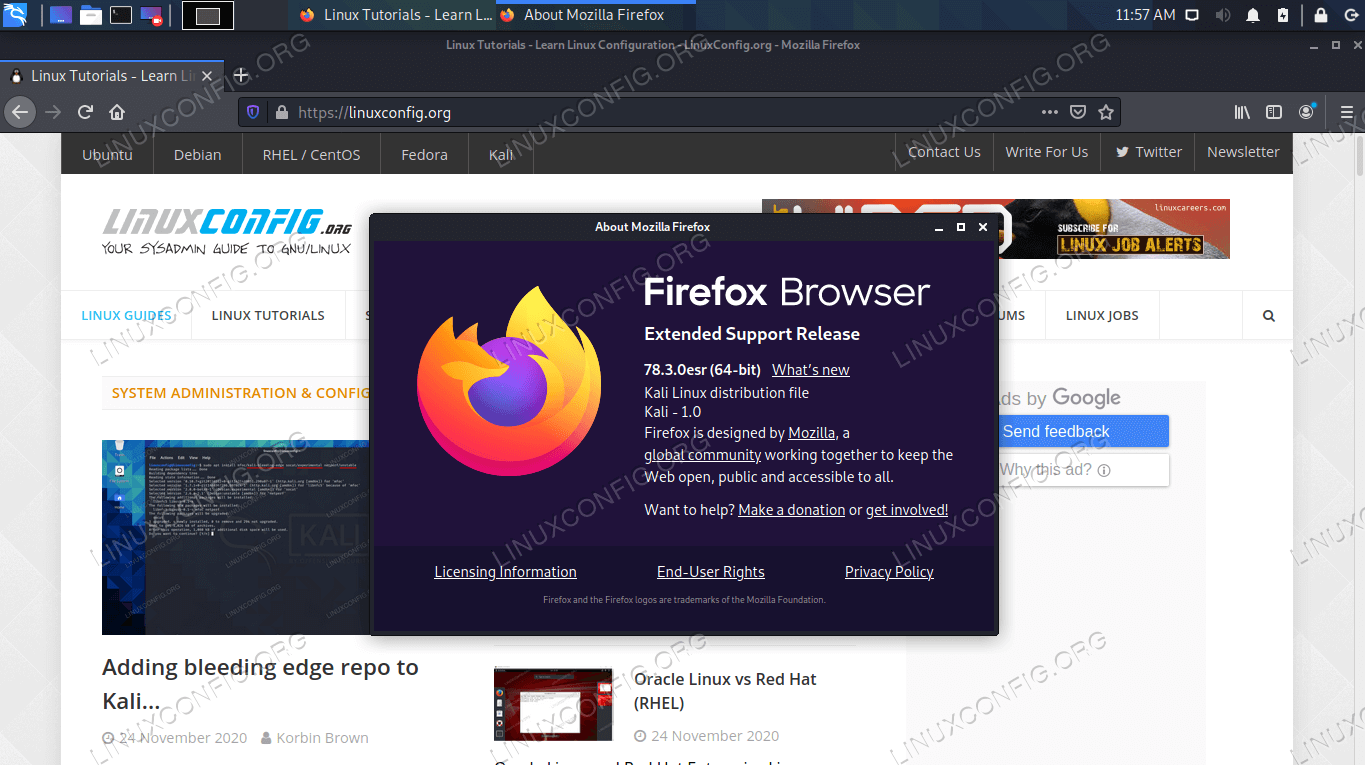 Firefox vs Firefox ESR on Linux

Mozilla Firefox is a really popular browser to use on Linux systems, with many or most distros even including it as the default web browser. It even edges out Chrome and Chromium, at least in the Linux world.

Some Linux distributions, like Kali or Debian include a different version of Firefox, called Firefox ESR (Extended Support Release).

In this guide, we'll be comparing Firefox to Firefox ESR. This will include a look into why some distros come with ESR instead of the normal version of the browser, and also what the pros and cons are of both browsers. 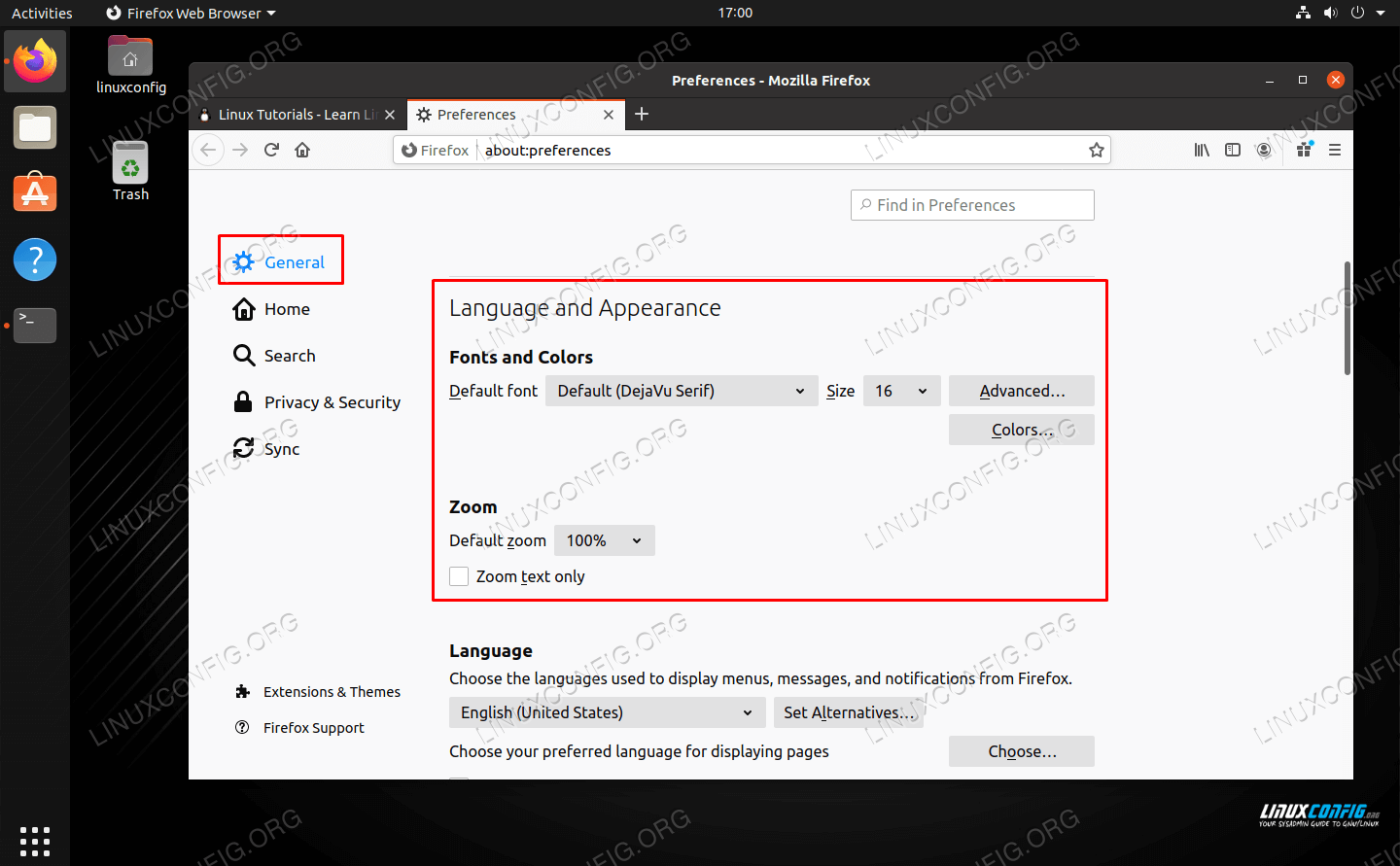 How to improve Firefox font rendering on Linux

For one reason or another, Mozilla Firefox may not render fonts as intended on all Linux systems. Fortunately, Firefox gives us a lot of control over the font configuration, so we can fine tune these settings until it looks better.

In this guide, we'll show you how to access Firefox's font settings to improve rendering. We'll also go over some more advanced options in case the usual ones don't work for you. 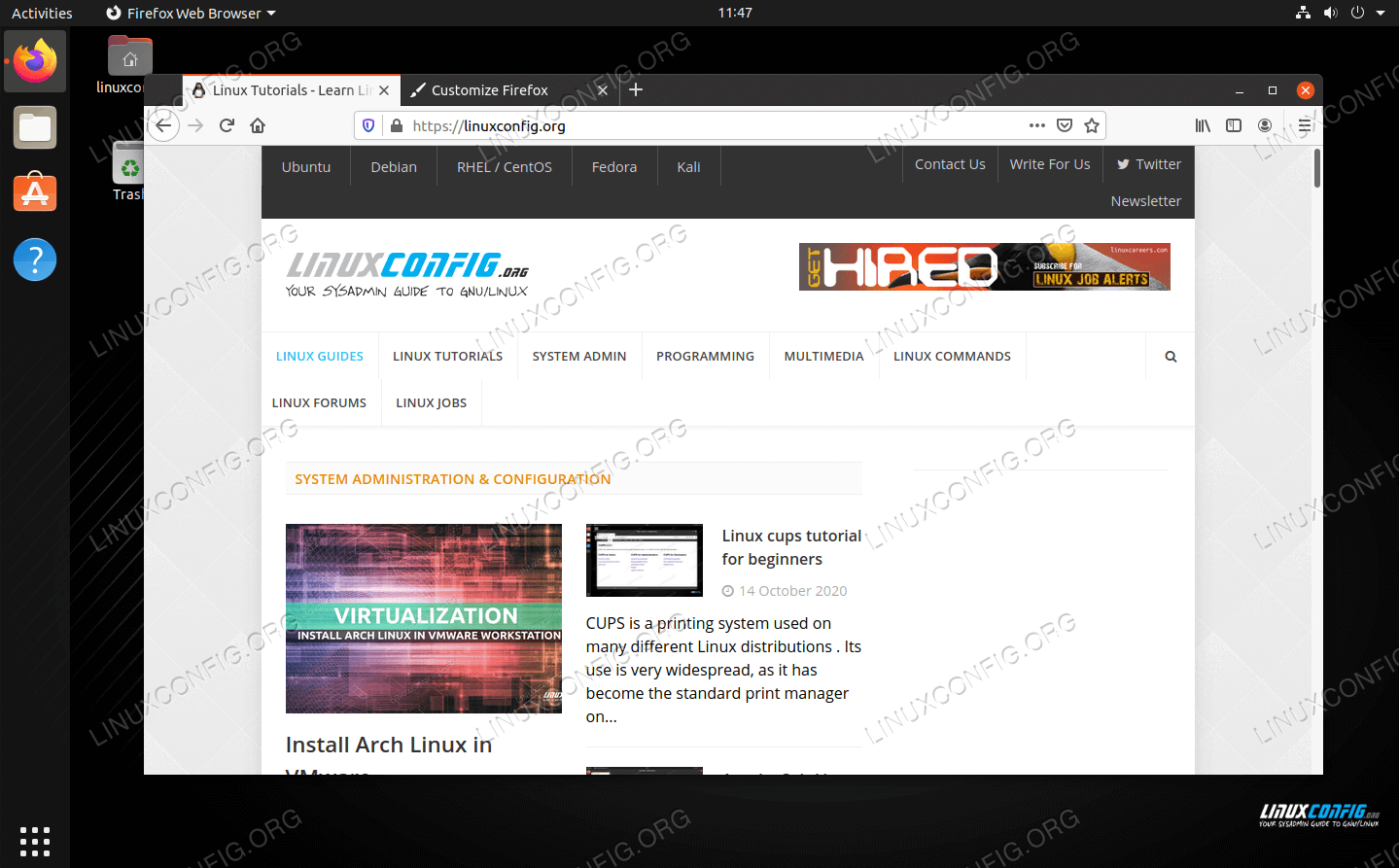 How to remove Firefox title bar on Linux

If you're into a sleek and minimal aesthetic when it comes to Linux, removing the title bar in Mozilla Firefox can help you accomplish that feel. The title bar isn't really necessary anyway, since it just contains information that's already available in the title of the tabs.

In this guide, we'll show you the step by step instructions to remove the title bar in Firefox. These same steps can also be used to toggle it back on. 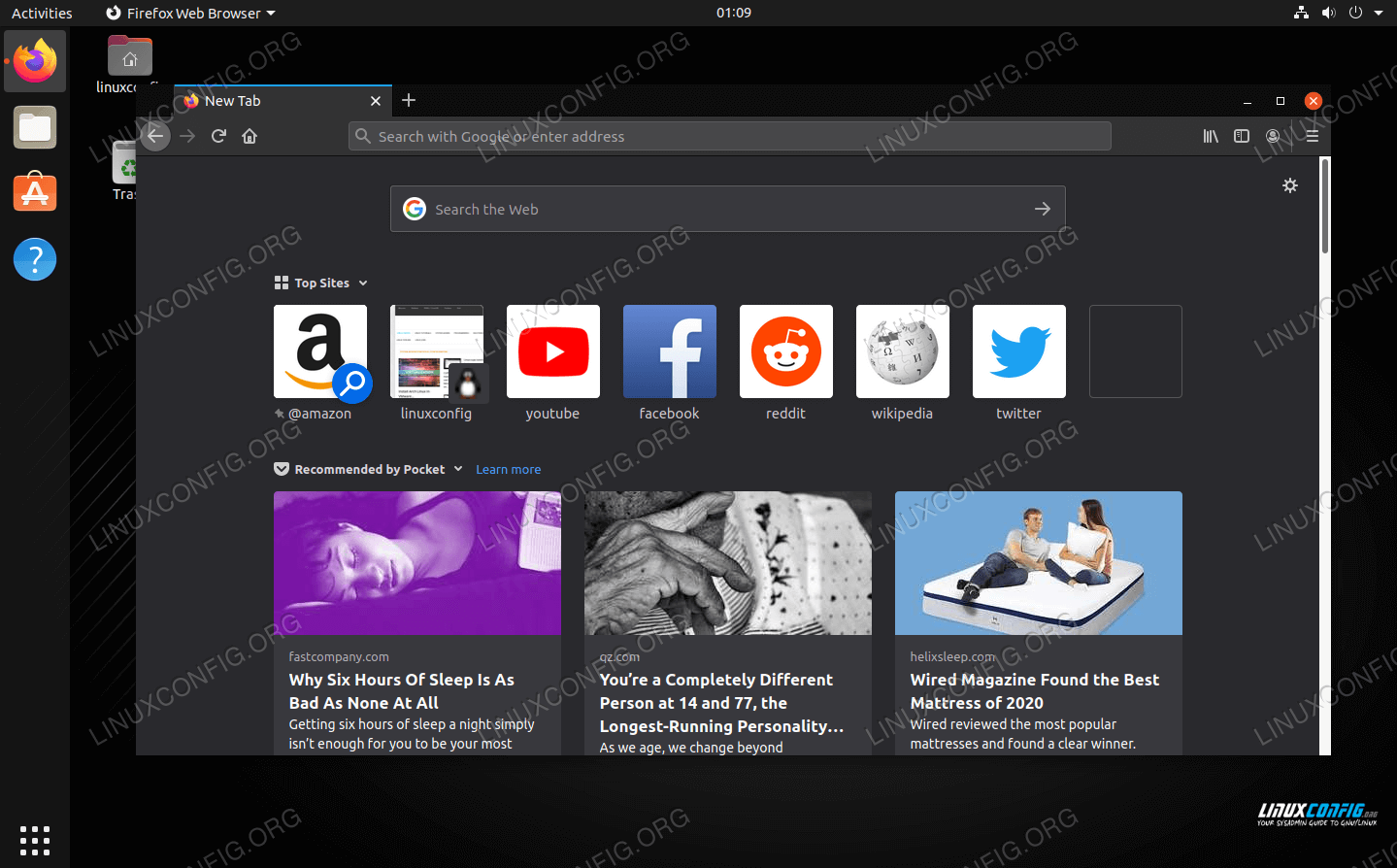 Dark mode is all the rage these past few years, with nearly all operating systems and applications now offering the feature. Mozilla Firefox is no exception, and it's pretty simple to enable dark mode inside the web browser. This can help reduce eye strain, especially when using your PC in a dimly lit room.

In this guide, we'll take you through the step by step instructions to enable dark mode in Firefox on a Linux system. You'll also see how to select from a variety of other themes or restore the classic brighter theme. 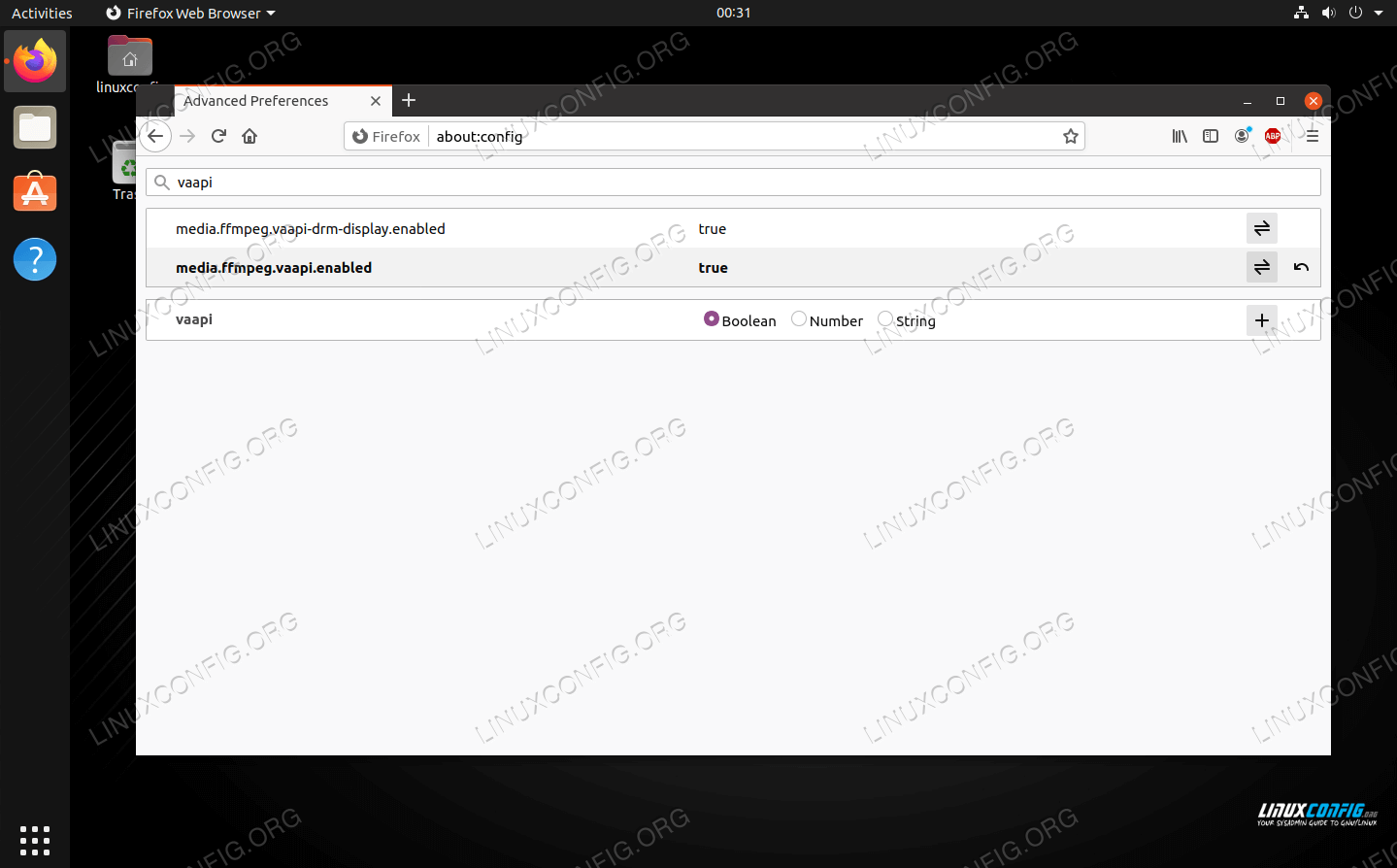 Firefox with VA-API on Linux

The Video Acceleration API, developed by Intel, has been enjoying widespread support in a variety of software, including the latest versions of Mozilla Firefox. The VA-API is an API for hardware acceleration that allows a computer to offload video decoding and encoding tasks to a system's video card, a task that historically has taken place in the CPU.

In this guide, we'll talk about Firefox's VA-API setting. This will include a brief introduction to what it is and how it works, as well as how to enable or disable the setting on a Linux system. Keep reading if you want to give the VA-API setting a try, potentially speeding up your web browser's video playback a great deal. 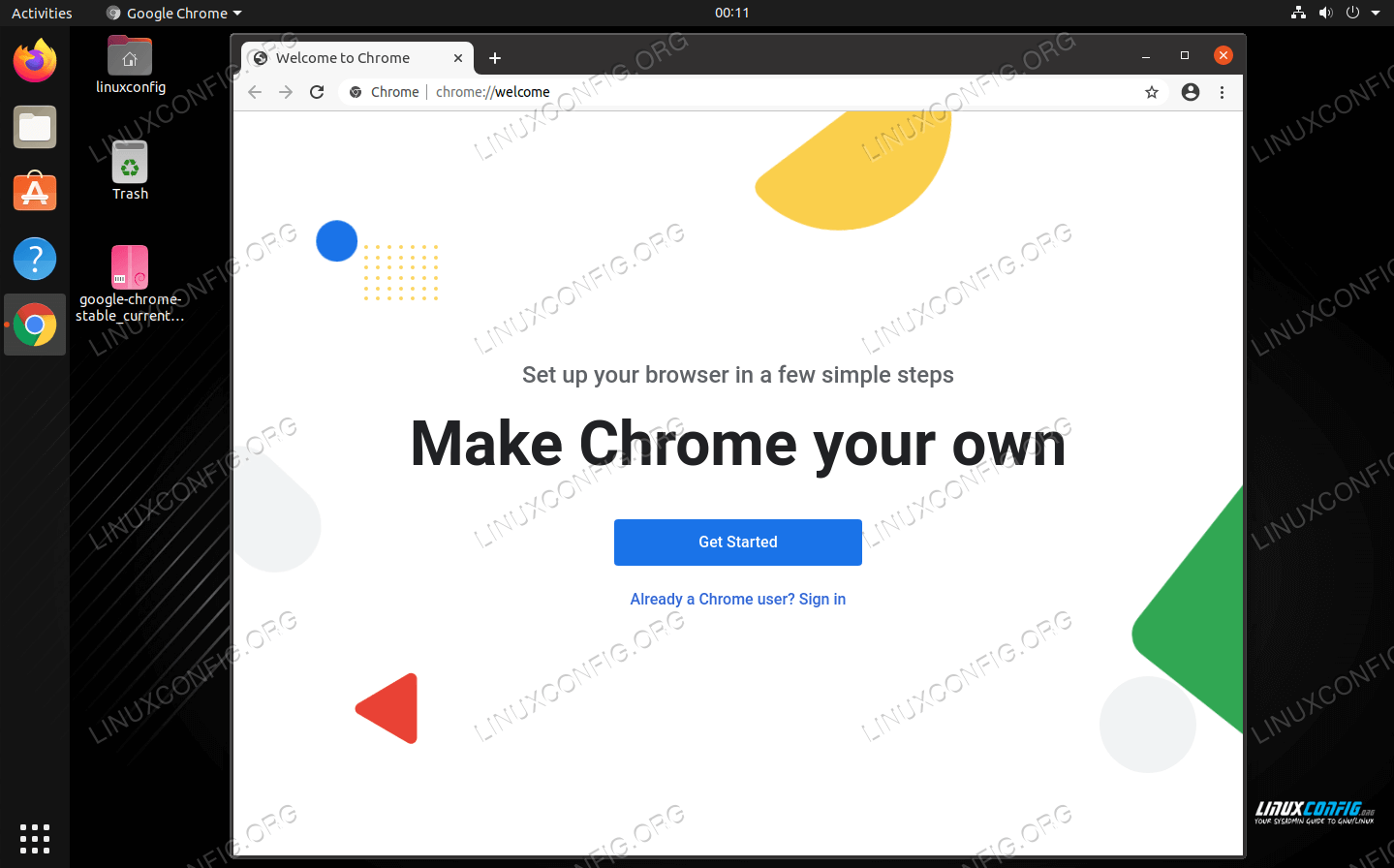 How to install Google Chrome Browser on Linux

Google Chrome is a very popular, yet closed source web browser. This makes it a little tricky to install on a Linux system, as it's pretty much never included by default on any distro, and usually not available for installation from official repositories. Contrast this to Mozilla Firefox, which is open source and ubiquitous across the most popular Linux distros.

There's still a Linux version of Chrome that's developed by Google, you just have to jump through an extra hoop or two to get it installed. In this guide, we'll go over the step by step instructions to install Google Chrome on all the most common Linux distros.

Google Chrome installed and running on a Linux system 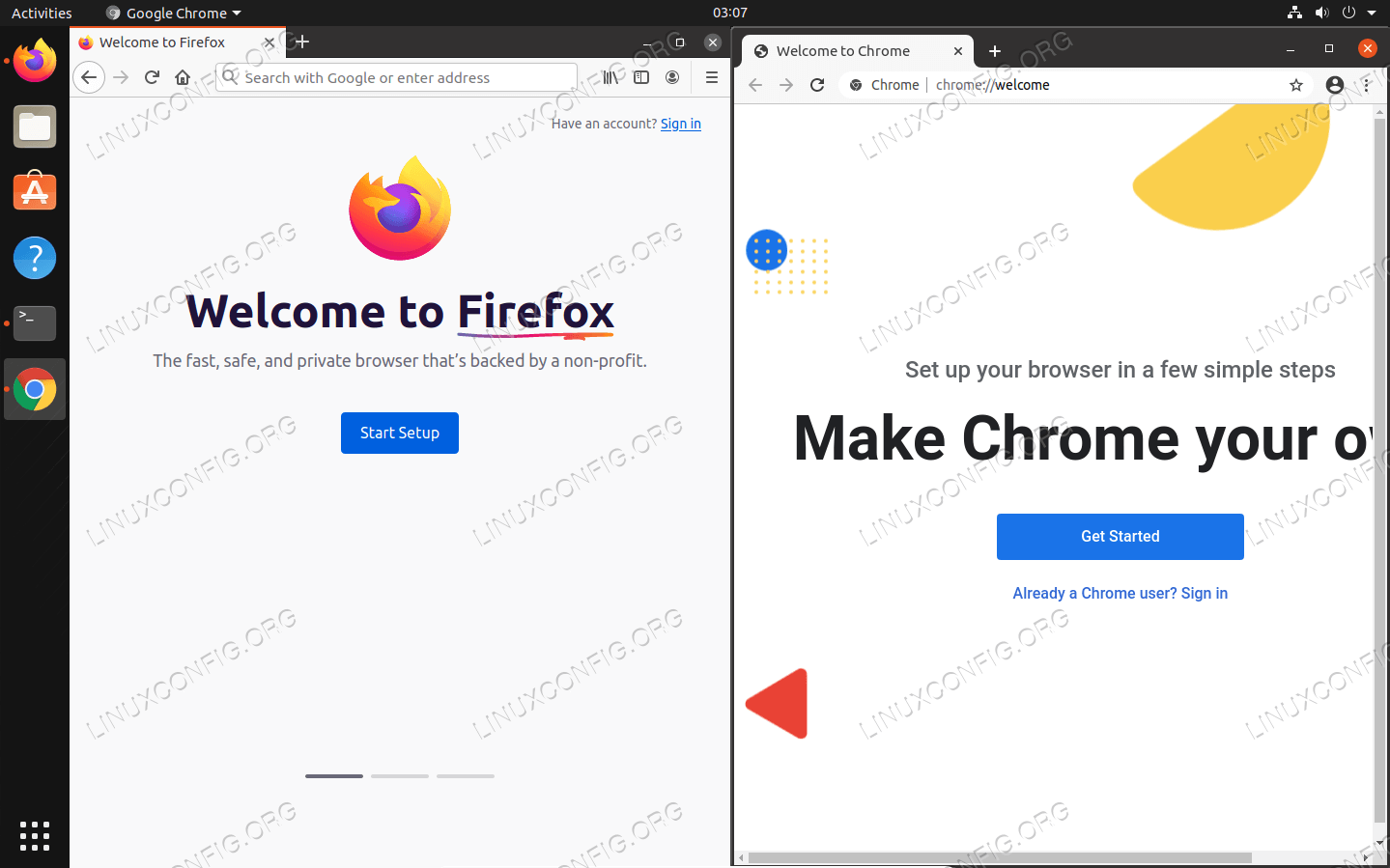 Users of Linux have many choices when it comes to web browsers. Among the top choices are Mozilla Firefox and Google Chrome, along with the closely related Chromium browser. In this guide, we'll go over a comparison of the three browsers, with the goal of allowing you to make an informed decision about which browser you should use.

This guide will include a basic review of the browsers, highlights on their features and differences, history, pros and cons, etc. Keep reading to learn more and find out which one works best for you. 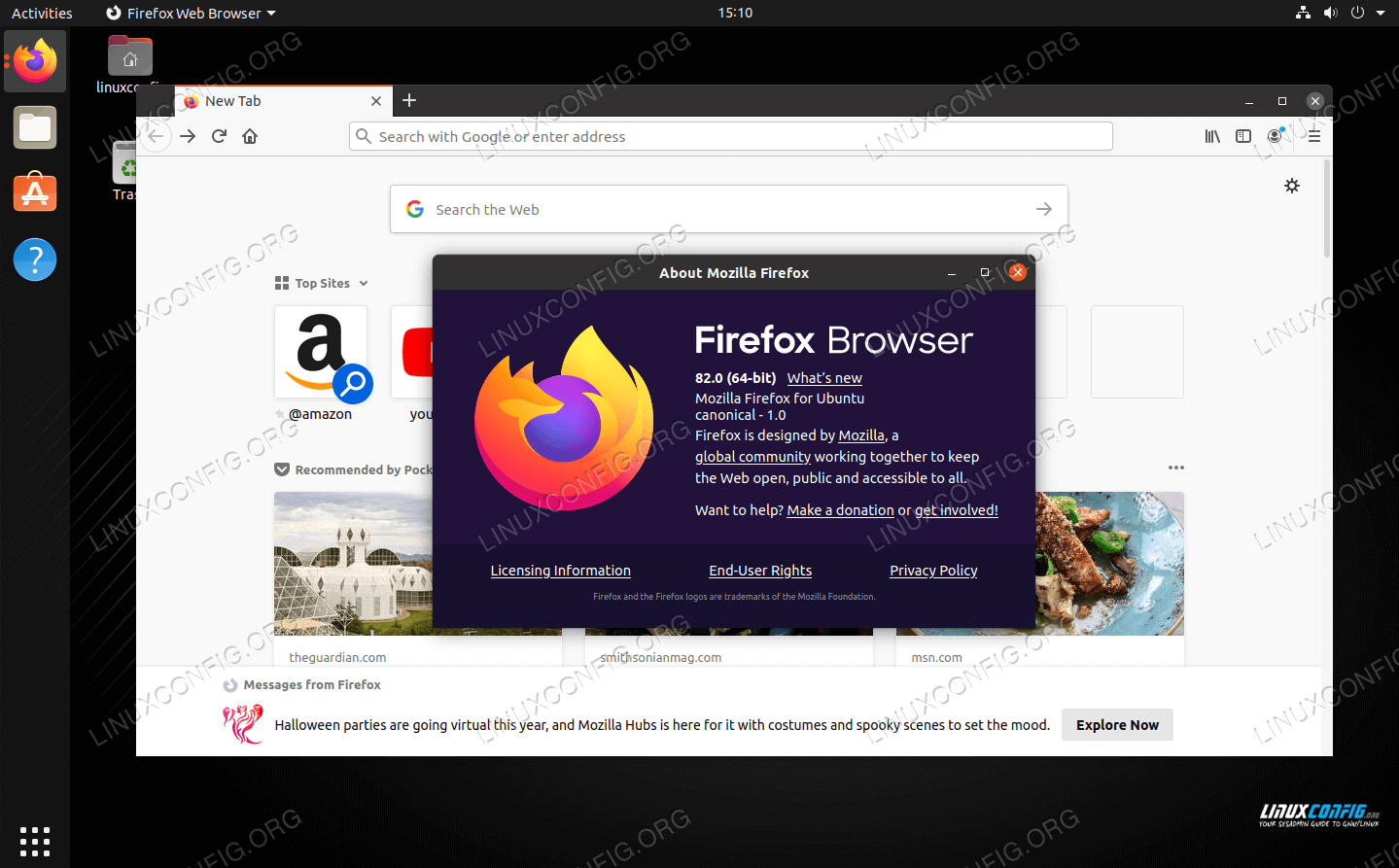 How to update Firefox on Linux

Keeping your Linux system's software up to date is always a good practice to follow, and Mozilla Firefox is no exception. Having the latest updates means that you have access to the newest features, bug fixes, and security patches for your web browser.

In this guide, we'll show you how to update Firefox on all the most popular Linux distributions. Firefox normally takes care of updates by itself and doesn't require much user intervention, but there are still a few methods that can be used to manually update the application.