The common scenario is that you have been given an access to a Linux system physically or via remote login and you have no idea what Linux version is installed on this particular system. Given that many of the today’s Linux Distributions have implemented systemd as part of their core design, to check for a Linux version is in many cases relatively simple procedure.

It is a common mistake to refer to the entire GNU/Linux operating system simply as Linux. The important note here is that the so called Linux is actually only the Kernel part of the system whereas GNU is the actual system as in collection of pre-compiled binaries, libraries and system tools. Both GNU and Linux kernel must function in tandem in order for the operating system to actually work.

Hence, one cannot exists without the other, so next time when you talk about your operating system and you wish to be technically correct, refer to it as GNU/Linux or simply as Lignux. 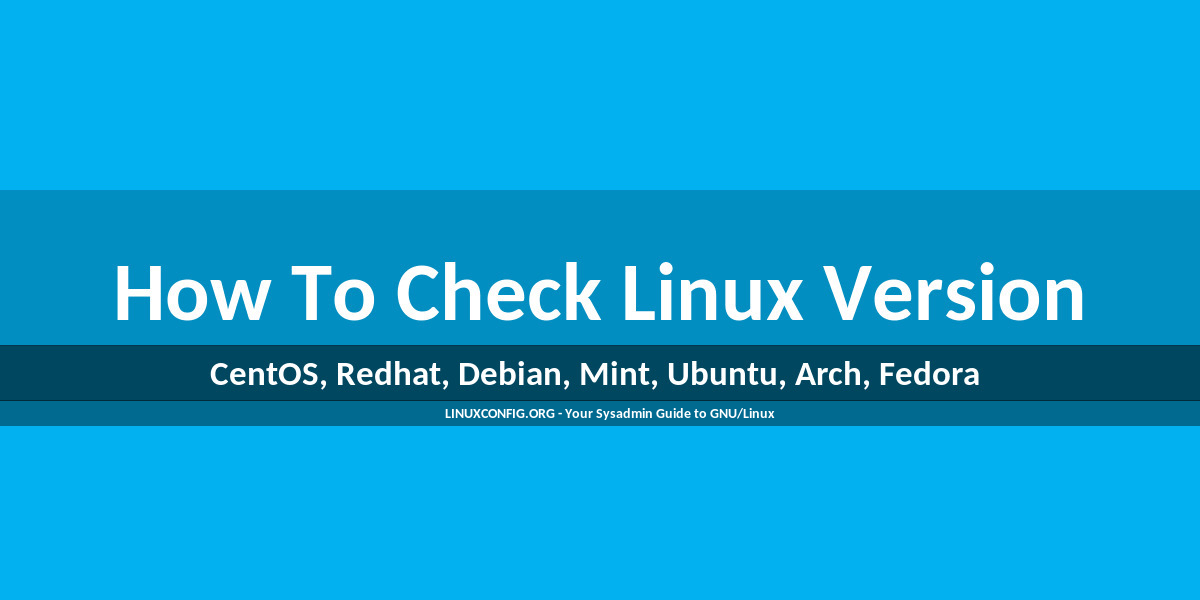 How to check Linux version

In case the above quick check for Linux version by using the systemctrl command did not work, the next step in order to check which GNU/Linux operating system is in use is to recognize which package manager is installed.

No matter on which GNU/Linux system you use the chances are very high that it will use one of the following three package managers:

Note, the output of the above command which is the full path to the actual package manager executable binary. Whereas, on systems with Redhat package management you may likely to see output similar to the one below:

How to check CentOS version

The most common way to check CentOS version is by reading a content of the /etc/centos-release file. For example:

Visit our guide for a more detailed information on how to check CentOS version.

How to check RHEL version

In case you need to check system version on the Redhat Enterprise Linux your best bet is to see the content of the /etc/redhat-release file. For example:

Visit our guide for a more detailed information on how to check RHEL version.

How to check Debian version

In case you need to check system version of the Debian GNU/Linux the most likely answer to your question is within the /etc/issue file. For example:

Visit our guide for a more detailed information on how to check Debian version.

How to check Linux Mint version

In case you are running Mint GNU/Linux, open a read the content of the /etc/issue file. For example:

Visit our guide for a more detailed information on how to check Linux Mint version.

How to check Ubuntu version

Same is with all the other Debian based GNU/Linux systems, to check the system version read the content of the /etc/issue file. For example:

Visit our guide for a more detailed information on how to check Ubuntu version.

How to check Arch version

Meaning, that every time you execute the pacman -Suy command your system is fully updated to the latest up to date state. From this reason there is not much of a point to check for an Arch Linux version release.

How to check RHEL version

Most of the RPM based systems hide their version as part of the /etc/*-release file. The below command will check the version of the Fedora GNU/Linux system:

How to check system architecture and Linux kernel version

The most common way on how to check for a system’s architecture and Linux kernel version is by using the uname command in combination with a -a argument. For example:

From the above output we can see that the Linux kernel version in use is 4.4.59+ and system architecture is x86_64.

How to check CPU architecture

The most common and recommended command to check CPU architecture is lscpu. Consider the following lscpu command output example:

Along with the CPU model name and the CPU frequency we can see that the CPU in question is 64-bit architecture as it supports both, the 32-bit and 64-bit binary execution.