AMule is a p2p, open source client for the  eD2k network. Released under the GPL license, it supports a lot of platforms and operating systems. In this tutorial we will see how to install a minimal, headless version of AMule on Raspbian “Stretch”, the latest version of the official Raspberry Pi OS. We will see how to setup the amule-daemon and adjust the firewall rules in order to control it via web interface. 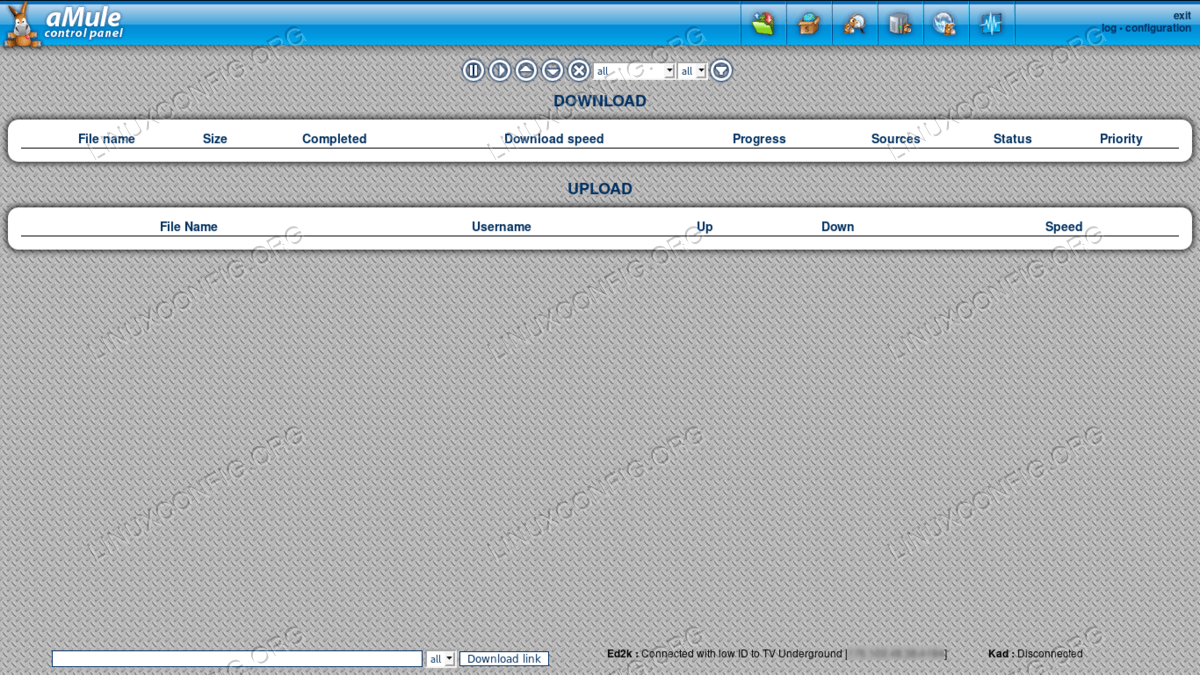 As you know Raspbian is based on Debian, which has three main release branches, named after Toy Story characters: stable (currently Stretch), testing (currently Buster) and unstable (Sid). Thanks to pinning we can install packages belonging to a specific branch of the distribution into another one. Pinning must be done carefully, and only when absolute necessary. In our case, we want to install a more recent version of the amule-daemon package from the testing repositories into the stable version.

The first step to reach our goal, is to add the testing repositories to our software sources. We open the /etc/apt/sources.list file, and append the following lines to it:

As a next step we must define our priority rules. We want packages to be installed from the stable repositories by default, and from testing only when we specify so. With our favorite text editor and administrative privileges, we open the /etc/apt/preferences file (creating it if it doesn’t already exist), and we paste the following content in it:

With the above configuration we set a Pin-Priority of 900 to the packages belonging to the stable repositories, and a negative priority, -1, to the ones contained in testing.  With this configuration the former software source will always be privileged, unless we explicitly require otherwise, as we will see in a moment. We synchronize our software sources by running:

As we said above, we must explicitly require to install the amule-daemon package from the testing repositories. We do it by using the -t option when running the apt-get install command, passing the target release for the package as argument. We run:

Once provide our confirmation, the package will be installed on our system. The amule-daemon will be started by default, but to be used it must be configured first.

The first thing to setup is the user the daemon should run as. We can use an already existent user on our system, or create a dedicated one just for the daemon. The most important thing, however is to avoid running the daemon as a privileged user. The file we must edit, at this point, is  /etc/default/amule-daemon. In the file we can define the AMULE_USER and optionally the AMULE_HOME variables. With the former we define the user the daemon should run as, with the  latter, an alternative folder inside which the .aMule directory, containing all the configuration, temporary and downloaded files, should be created. The option can be useful, for example, to keep the configuration files on a separate partition or hard disk. Here is the content of the edited file:

The next step consists in the generation and the configuration of  the amule-daemon and the web server settings. As the user we specified in the above configuration, we run the following command:

The command will try to start the daemon in foreground but will fail, since we didn’t configured it appropriately yet. Don’t worry! All that matter to us, is that the command will generate the .aMule directory containing the AMule configuration files in the HOME directory of the user. The file we must edit is .aMule/amule.conf. It can be used to configure the application, specifying, among the others, the ports that should be used for the connection and the directories to be used for temporary and incoming files, by default set respectively to .aMule/Temp and .aMule/Incoming.

For the amule-daemon to work correctly, we must, first of all, change the value of AcceptExternalConnection and set it to 1. The line to edit is 117:

After that, we must choose a password for the connections. In the file we don’t put the plain password, but its md5 hash. To obtain the hash of the password we can run the following command, where “secretpassword” should be substituted by the password you want to use:

We must copy the generated password at line 120 of the amule.conf file, as the value of ECPassword:

Finally, we must enable the WebServer and provide the password that will be used for the remote login. The related options can be found under the [WebServer] section, at lines 129 and 130 of the file, respectively. To generate the password for the web server, we can use the same method we used above.

At line 131 we can notice the PasswordLow option. It is not mandatory, but can be useful to access the web interface with less privileges.

Before we can access the amule-daemon using the web interface, we must modify our firewall rules to let incoming traffic through port 4711/tcp. For the sake of this tutorial I will assume the firewalld firewall manager is in use on the machine:

We specified the --permanent option to make the changes persistent. Be aware that the above command will operate on the default  firewalld zone. If we want the changes to be applied on a specific zone, we must specify its name as the argument of the --zone option. By the way, if you are not familiar with firewalld, you can read our guide about it here.

We must reload the firewall for the changes to be effective:

The rule we specified above will grant us access to the web interface. To achieve good download performance, we should remember, however, to enable also traffic through ports  4662/tcp , 4672/udp  and 4665/udp. The same ports should also be opened in the firewall of the router, and redirected to the IP of the machine the daemon is running on, when using NAT. How to perform such operation is, however, out of the scope of this tutorial.

We can now restart the amule-daemon:

At this point we should be able to reach the web interface successfully, specifying the IP of our machine and the port 4711 in the browser address bar. The IP of my machine is 192.168.0.39: 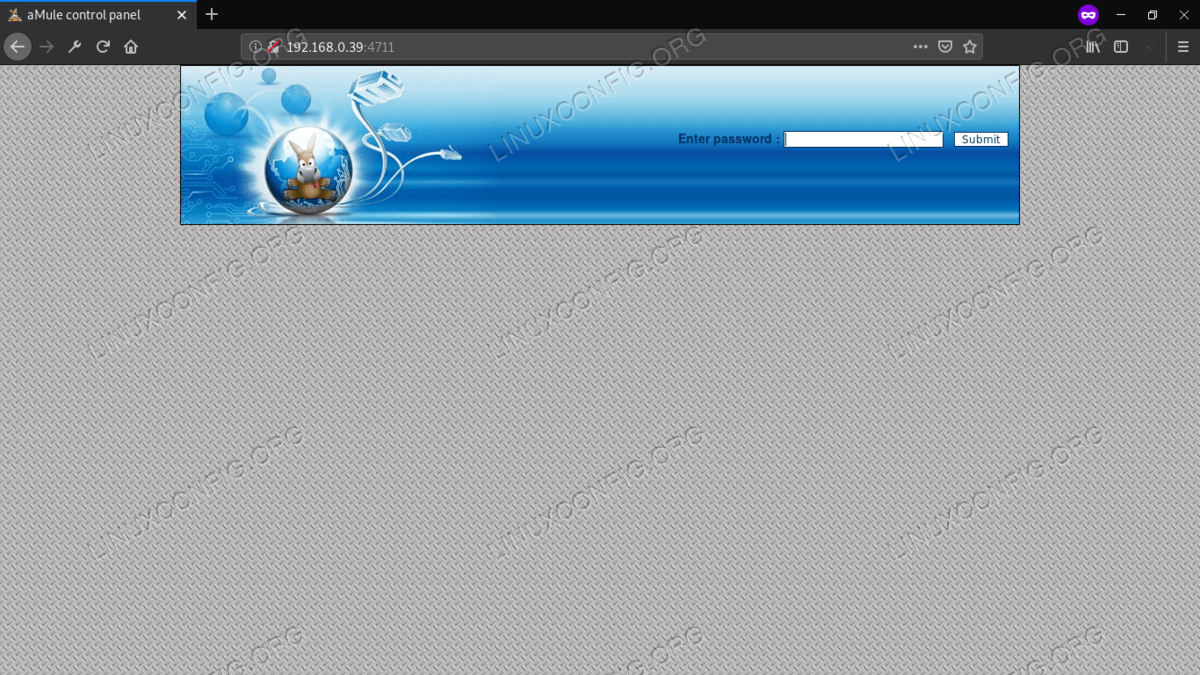 We can login using the password we set before:

The web interface contains a subset of the functionalities provided by the GUI version of AMule; however, the most common tasks can be easily performed from it.

In this tutorial we learned how to install and run an headless version of AMule, on Raspbian “stretch”, the latest stable version of the official Raspberry Pi operating system. We saw how to install a recent version of the amule-daemon from the distribution testing repositories using pinning, how to configure the daemon, and how setup the firewall in order to access and control AMule via the provided web interface. If you want to know more about AMule, you can visit the official project wiki page.