In case you haven't realized already, encryption is important. For the web, that means using SSL certificates to secure web traffic. Recently, Mozilla and Google have gone as far as to mark sites without SSL certificates as insecure in Firefox and Chrome.

How to install missing ifconfig command on Debian Linux

The ifconfig command has been deprecated and thus missing by default on Debian Linux, starting from Debian stretch. The new and recommended alternative for examining a network configuration on Debian Linux is ip command. For example to use ip command to display a network configuration run the following: The above ip command can be abbreviated to: If you still prefer to use ifconfig as part of your daily sys admin routine, you can easily install it as part of the net-tools package.

Privileged access to your Debian Linux system is required.

However, you may consider an yet another, alternative approach in comparison to loading your firmware from the USB drive as described below, which is to use unofficial images containing non-free firmware directly. The unofficial non-free images which inlcude firmware packages for each Debian's release version are available here:
http://cdimage.debian.org/cdimage/unofficial/non-free/cd-including-firmware/ 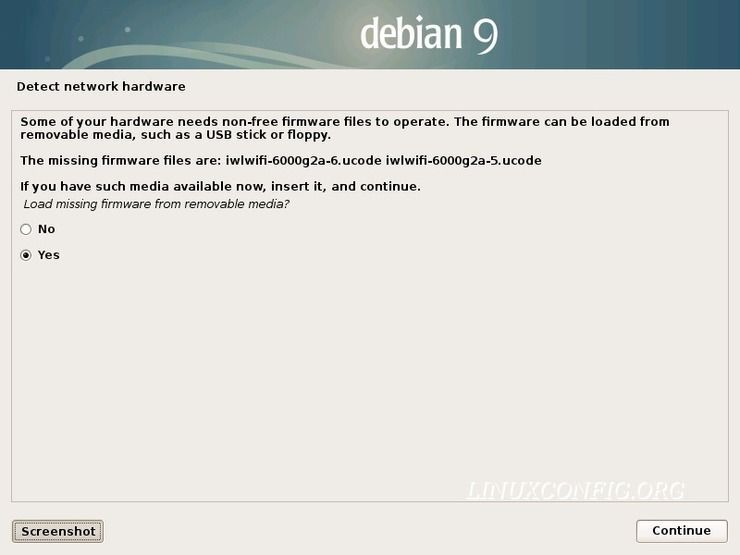 USB drive or other removable media such is SD card etc.

Debian's current stable package repository may not always contain an up to date software to be in line with our expectations. There is a very good reason for this, such as a stable system as a trade-off for running bleeding edge software.

PHP server-side scripting language is not an exemption! At the time of writing the current Debian's PHP version is 5.6.29 whereas the latest PHP source release is 7.1.0( given that there is no PHP 6 at all ).

The current PHP developer's claims put PHP 7 in front of PHP 5.6 in terms of speed, where PHP 7 is supposed to be as twice as fast as its predecessor:

Thanks to the new Zend Engine 3.0, your apps see up to 2x faster performance and 50% better memory consumption than PHP 5.6, allowing you to serve more concurrent users without adding any hardware. Designed and refactored for today’s workloads, PHP 7 is the ultimate choice for web developers today.
Reference: zend.com/en/resources/php-7

To compare a speed between PHP 5.6 and latest PHP 7.1.0 is not an objective of this article. However, the objective is the get that latest PHP 7 release installed on Debian 8 system. Additionally we will install PHP-FPM (FastCGI Process Manager). This guide will offer two possible installations.

What you will learn

In this article, you will learn how to install kannel server on Debian and integrate it to a Nagios server for sms notifications. We asume that the reader already has a working Nagios server and we will focus on Kannel installation and its integration with Nagios.

The installation of kannel is simply done through apt-get command:

Eclipse is a powerful and feature-rich IDE for Java developers, but the versions packaged with Debian and Ubuntu lag far behind the latest releases. In fact, the version shipping with Ubuntu 16.04 was released in 2012 and was discontinued quite some time ago.

Despite the fact that both Ubuntu and Debian don't package and ship new versions of it anymore, Eclipse is still easily available to users of both distributions. You just have to go about getting it a different way, and the Eclipse developers have a great solution for this.

Since Eclipse is primarily a Java IDE(You can use it with other languages), you're probably going to want to install Java 8 on your system to be able to develop applications. The good news is; Java 8 is available for both Ubuntu and Debian.

Java 8 was not made available to Debian users when Jessie was first launched, but it is available through the jessie-backports repository. So, the first step in getting Java 8 installed is to enable that repository.

Open up /etc/apt/sources.list in your favorite text editor as root and add the following line.

The following quick guide will help you to setup a latest version of Django framework with Python 3 on Debian Jessie Linux. The current default Django version on Debian 8 Jessie Linux is 1.7 with python 2.7. Follow the below step in order to install Python 3 with latest Django. Let's start by installation of python3-setuptools: The above command will also install Python 3 on your system. Next, use easy_install3 to install alternative Python package installer pip:

After fresh system installation the root login on the Debian Linux is disabled by default. When you attempt to login as root user to your Debian Jessie Linux server the access will be denied eg.: To enable SSH login for a root user on Debian Linux system you need to first configure SSH server. Open /etc/ssh/sshd_config and change the following line:

The following config will guide you through a process of changing the docker's default /var/lib/docker storage disk space to another directory. There are various reasons why you may want to change docker's default directory from which the most obvious could be that ran out of disk space. The following guide should work for both Ubuntu and Debian Linux or any other systemd system. Make sure to follow this guide in the exact order of execution.

Let's get started by modifying systemd's docker start up script. Open file /lib/systemd/system/docker.service with your favorite text editor and replace the following line where /new/path/docker is a location of your new chosen docker directory:

Custom kernels in Ubuntu/Debian - how, when and why

So, you've decided to try out this thing you heard others talk about, called 'compiling a custom kernel'. If you are trying this as a hobby, or because you want to learn a new skill, very well – read on.

However, before we start, we will try to explain situations when this need arises and how to deal with it. Note that this is an extensive subject which needs much more in terms of space than we will provide here. You will learn the basics, what you need, what to do and what you'll achieve.

For more info, as usual, Google is your friend; also , the documentation resident in the kernel source tree will answer lots of questions. So, let's start with the beginning, with a last note : if need arises, we will publish more articles related to kernel compiling pertaining to other distros.

C development on Linux - Getting a package in the official Debian repositories - XII.

This is the last installment of our C development series, and arguably the most non-technical one. If you followed us from the beginning and practiced as much as possible, you now have some basic knowledge on C development and how to package your (favorite) application for two of the most used Linux distribution families, Debian and Redhat. This article is about the community, how to contribute, how to collaborate and finally, how to get your package in the official Debian archives. If you read the previous articles in the series you won't need any other technical knowledge; all you need is the will to put your knowledge to work for community's benefit.

You have an application, you packaged it and now you're anxious to upload it to the Debian archives (by the way, many of the ideas presented here apply to many Open Source projects: what differs usually is the way of doing things). We'd say not so fast. Take a minute to breathe and find ways to make yourself known to the community. Take some time to read the Debian New Maintainer's Guide, if you haven't already, and remember the key word here: community. Everyone is a volunteer, and we chose Debian especially because of its democratic views, and nobody is paid or forced in any way to do your bidding. Anyway, since we know how much you like to read guides and manuals, part of this article will consist of some sane advice regarding collaboration. First, get used to get by on your own. Nobody likes a person that, when he or she hits the first sign of trouble, instead of going to the best Internet friend, $SEARCH_ENGINE, start polluting the forums, mailing lists and IRC channels with puerile questions like "What gcc flags do I need to compile my code for i686?". The only thing you will gain is a less than friendly RTFM and lots of missing geek points. Yes, we know that the gcc manual is big and a sure shot for headaches, but reading the manual, then searching the net first is the Right Way (TM). No exceptions. You will make a first good impression when you show the other developers that you made your homework. On the other hand, giving beginners a hard time, especially when such behavior is not called for, will not get you any popularity. Remember that you were once like them, remember that you, as we all, still have a lot to learn, and perhaps point the person towards a resource you think is helpful. In this context, remember that word again: community. Your work doesn't mean much, despite the fact that it means the world to you, unless the community finds it useful. Collaborate with them and be ready to accept feedback, and be thankful for it, even though you might not like what you hear. Leave your pride at the door and remember that the best and maybe only way to make your software better is community feedback. But don't fall into extremes, and try to be impartial. Perhaps some people will try to put you down just for the fun of it: ignore them and concentrate on constructive criticism.

The following config will guide you through a process of installing Cran R-3.2.1 on Debian Linux 8 Jessie. First, updated you repository list: If you have not done so yet install a curl command which you will use to download Cran R-3.2.1 source code:

The following lines will describe a procedure on how to mimic Ubuntu's sudo privilege authorization system on Debian Linux. Sudo allows users to run programs with the authorization privileges of another user by supplying their own password for authentication.

If you have not done so yet, first install sudo package: Once sudo is installed run: which allows you to edit the content of /etc/sudoers file. Change the content of this file as show below:

This short config will describe a installation of s3cmd Command Line S3 tool on Debian. First update your repository: Next, install Python package installer pip which will be later used to install s3cmd:

If you are looking for the netstat command and getting error: This simply means that the relevant package net-tools which includes netstat executable is not installed, thus missing. The package net-tools may not be installed on your system by default so you need to install it manually.