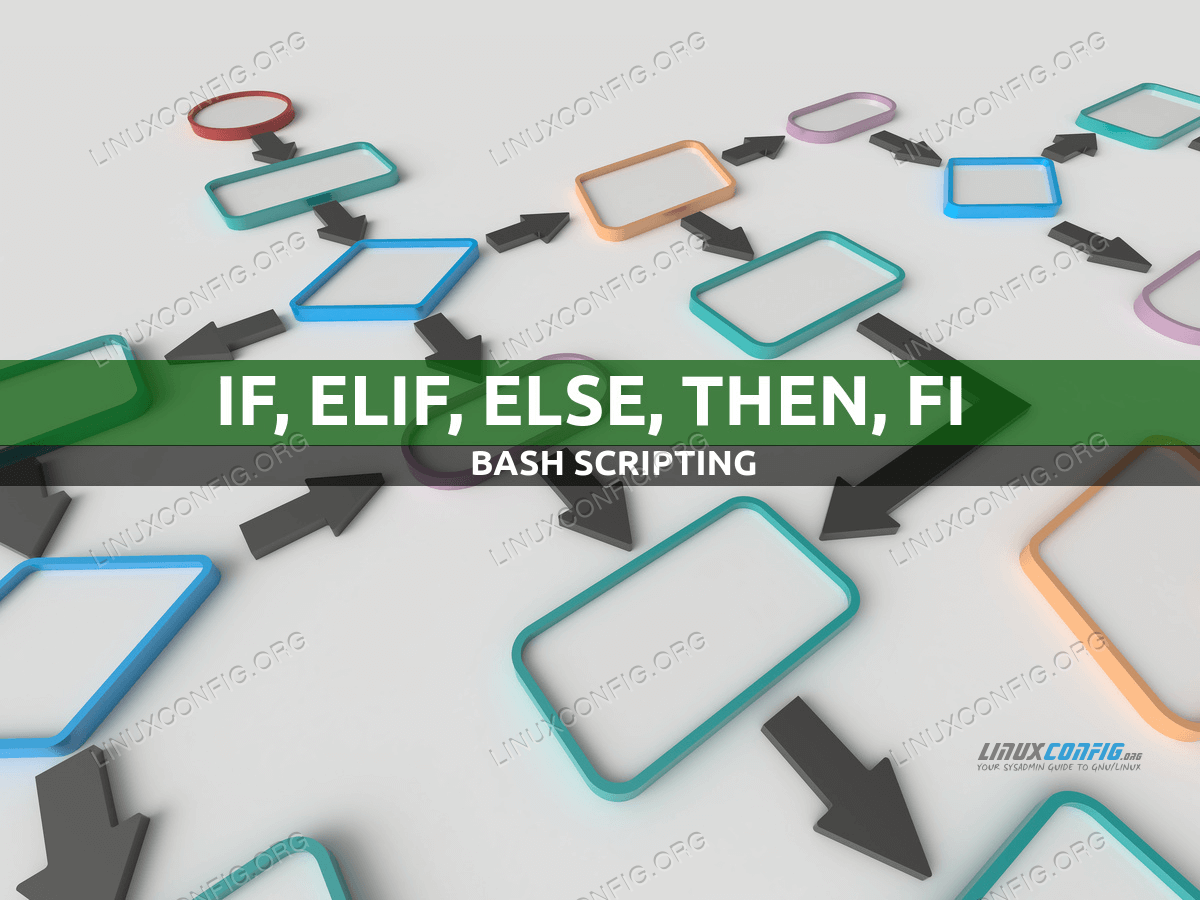 Bash if Statements: if, elif, else, then, fi

Example 1: Simple if statement at the command line

In this statement, we are comparing one to one. Note that -eq mean equal to. To do the reverse, one can use -ne which means not equal to, as shown in the following example:

In this case, we checked for non-equality, and as 0 is not equal to 1 the if statement is true, and the commands after the then will be executed. Let’s change this slightly:

Here we introduced an else clause; what commands to execute when the condition in the if statement has proven to be false (or not true). As we trying to query whether 1 is not equal (-ne) to 1 this time, and as 1 does equal 1 (wich is not the case), the condition formulated in this if statement is false, and we run into our else statement with the matching text printed.

Example 2: Using and if statement from within a Bash shell script

It is good to note that you can easily copy and paste any if statement shown here or elsewhere, and use it inside a Bash shell script. For example:

Here we simply created a small myscript.sh shell script by using echo and the > redirector to redirect the output from our echo to a file. When you use > a new file will be created, and any file with the same name will be overwritten so please use it with care. Next we add our if statement again by using echo and a double redirector >> which unlike > will not create a new file, and simply append text to the file indicated.

Next we chmod +x the script to make it executable, and execute the script using the ./ prefix which is required in Bash (any correct path specifier will do).

The first line of the script is simply making sure that we will be using the Bash interpreter for our script. It is good practice to always set this for Bash and other scripts (for other scripts, you will want to set this to whatever interpreter which is going to execute your script, for example #!/usr/bin/python3 for a Python 3 (.py3 for example) scripts etc).

When we execute the script we can see that the output is being generated as expected (1 matches 1): Matched!.

Example 3: What is elif?

And the output thereof:

Here we stepped through the first if statement, and since 0 does not match 1, the else clause is activated. This happens a second time when 0 also proves unequal to 2 and hence the -eq (equal to) condition fails, and the second else clause is activated, giving as output 0!=2. Let’s compare this with an elif based statement in the following test2.sh.

And the output thereof:

The script did exactly the same, but in a much more flexible and shorter way, requiring only one level of if statement depth and with cleaner overall code. Note also that it is possible to have one if statement followed by many elseif statements, allowing a developer to test a variety of conditions is a neat looking, single level structure.

And, for a somewhat more advanced look at what if can do for you when combined with subshells, checkout our How To Use Bash Subshells Inside If Statements article!