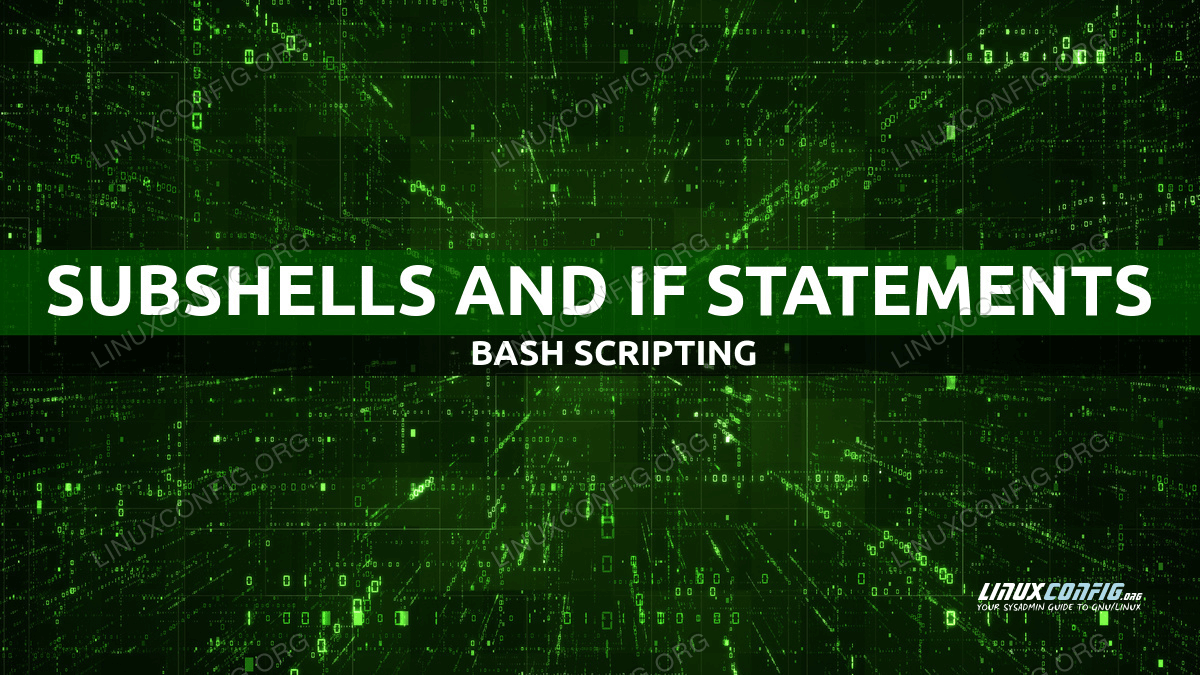 How to Use Bash Subshells Inside if Statements

Let us look at a simple example to start. Note that these statements, whilst executed here at the command line, can also be incorporated into a Bash shell script (a plain text file, preferably with a .sh extension, and marked as executable by using the chmod +x myscript.sh command – where myscript.sh is an example filename). We also introduce an error to make things more interesting.

In the first command, we use a simple test (if [ "some_text" == "some_other_text" ]; then ...) to check equality between two strings. For the second string, we have started a Bash subshell ($(..)) to output the word test. The result is that test matches test and so the commands after the then clause will be executed, in this case echo 'Matches!' is executed and Matches! prints.

In the second command, we change the echo command to an incorrect text match by letting the subshell echo/output incorrect ($(echo 'incorrect')). We get a strange looking error back. Look closely, can you spot the error? Also compare the second command with the first.

The issue is that in our second command, the else clause (which is executed when the equality match fails, i.e. ‘what else to do when the if statement was not true) misses an echo command. Whereas it may read fluently (if … then echo … else …) the command is incorrect as it requires an additional echo. The result is that the Bash shell tries to execute Does not match! as a literal command.

Let’s fix this up!

Much better. And we can see our subshell, it’s echo, and the full if statement executing correctly. Great, let’s dive a little deeper.

Here we set a variable VAR to either abc or adc and next output this variable, again using a subshell, against the presence of b in the string. Note that the original asterisk (*) prefix to the "b" compare clause indicates anything before this string and the suffix asterisk (*) similarly means anything after this string. We can see how b was found in the first abc string, but not in the second command/string where adc was used as a compare string.

Note also how we used [[...]] brackets for the if statement this time. This is unrelated to the use of subshells, and it is simply a newer Bash standard of writing if statements which can be used for additional or other use cases then the traditional [...] syntax. We require it here to do the special b matching we are attempting, using the asterisk (*) prefix and suffix to the "b" compare clause.

In a if statement with single [...] brackets this would fail:

As the if [...] syntax does not recognize the asterisk (*) prefix and suffix to the "b" compare clause, and one needs to use [[...]] brackets instead.

Another thing to note is that this time we used double quotes (") inside the subshell (instead of the single quotes like in the first example): when one starts a subshell, such use of double quotes is not only allowed, but I can highly recommend it for various uses cases. It is handy in some situations where a lot of complex parsing is going on and a mix of single and double quotes is necessary. The double quotes will not terminate the quotes started before and outside of the subshell.

Please note that with most of the previous examples, one could have simply left off the subshell and do a simple compare directly with for example the variable, i.e.:

We chose however to introduce subshells with echo (effectively a null-operation, i.e. effectively the same as just using the variable or the text in question) as it would highlight that 1) subshells work effectively, and 2) that they can be used from within if statements.

We do not need to restrict our subshell usage inside if statements to a single command, nor to the use of echo alone. Let’s make a small setup:

We created a file named a, and counted the number of lines (using wc -l, a counting tool which can count the number of lines by using the -l option). We also made sure to introduce the --color=never option to ls to avoid parsing issues when terminal color coding is used.

Next, let’s work these statements directly into if statements:

Here we use the same ls ... wc -l code twice directly from within an if statement. The first if statement, which uses -z checks if the text between quotes (the first option to the -z if-instruction) is empty. It is not as the ls command will yield some output in this case, given that we created the file a.

In the second command, we actually test if the output from our ls ... wc -l command is equal to 1 by using the -eq test option in the if statement. eq stands for equal to. Note that -eq (and it’s reverse -ne being not equal to) can only be used for numbers. For text based strings, use == (equal) and != (not equal) instead.

The output of command (Exactly one file found!) is correct, and our if statement with incorporated multi-command subshell works fine!

Also of interest to note there is that the first compare value in the second if statement (i.e. $(ls --color=never ./a | wc -l) with output 1) is numeric. So, why have we used two double quotes ("...") around the subshell statement? This has nothing to do with subshells, and all with how if works in Bash, and one may not know this trick or shorthand yet; please consider this:

In other words, using double quotes is a slightly safer way of programming Bash if statements, even if the condition is a numeric based condition. It protects against more complex strings being interpreted as individual items rather then a single value, and it returns a correct error message (integer expression expected), instead of the more ambiguous bash: [: too many arguments error.

It also does not matter to Bash that you are comparing what seems to be a text string (as indicated by "...") with a numeric value; it works, provided that the number is numeric. And if it is not, it will still provide a better error message indicating that the string is not numeric, as seen. In summary, it is better to always quote your subshell, text or variable with double quotes, even when comparing numeric items. To prove this works well, consider: