Install Lynis and use it to scan for vulnerabilities.

Lynis is available for most major distributions.

Lynis is a tool for performing an automated audit of your system. It’s not a virus scanner or an antivirus. Instead, it checks certain criteria on your system to see how it’s configured. By evaluating the system configuration, Lynis can give you an idea what areas are reasonably secure, and which ones need additional hardening.

Lynis is packaged for just about every distribution. It’s fairly simple to get installed.

Ubuntu Artful and the testing releases of Debian have the latest version already available. Just install it.

Debian Stable and Ubuntu 16.04 both have Lynis in their repositories, but it’s old. To install the latest version, add the repository from the Lynis developers.

Create a file at /etc/apt/sources.list.d/lynis.list. Add in he following line.

Then, update and install Lynis.

First, install all of the dependencies.

Next, create a file at /etc/yum.repos.d/lynis.repo. Place the following configuration in the file.

Scanning with Lynis is very simple. You really just tell Lynis to audit the system, and it runs with it.

Lynis will run through and scan your system. As it runs, it prints its results in the terminal. For a more detailed scan, you can tell Lynis to check the entire system with the -c flag. 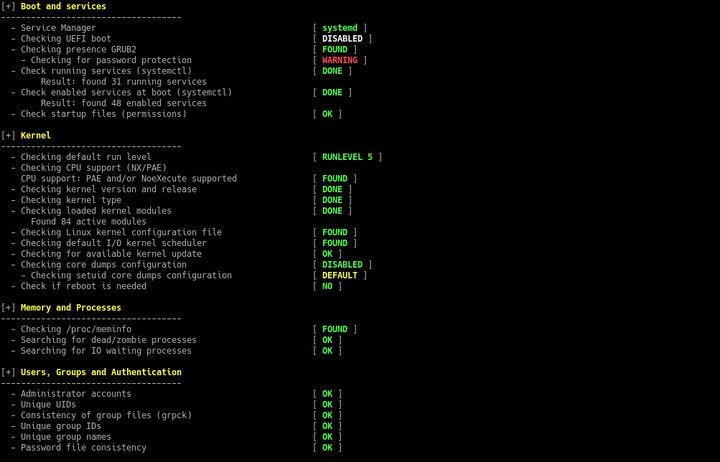 The report that Lynis generates might be a little confusing at first. The entire report is broken down into sections. The sections break down potential vulnerabilities by service or logical grouping to make the report easier to read.

Next, the results use a color code from green to red to denote the severity of the issue. The results will also tell you the basic status of different things. The results are usually basic, and let you know if something is present or on.

Ultimately, it’s up to you to determine whether the results of the report concern you or not. The purpose is to make you aware of potential issues. It’s your call on whether or not to act.