Knowing how to create and manage KVM virtual machines from command line can be really useful in certain scenarios: when working on headless servers, for example. Nonetheless, being able to script interactions with virtual machines can greatly improve our productivity. In this tutorial you will learn how to create, delete, clone and manage KVM machines with the help of few utilities.

Before we start working, it would be useful to define what KVM and Qemu are and how they interact. KVM stands for Kernel Virtual Machine, and it is a module of the Linux kernel which allows a program to access and make use of the virtualization capabilities of modern processors, by exposing the /dev/kvm interface. Qemu is, instead, the software which actually performs the OS emulation. It is and open source machine emulator and virtualizer which can use the acceleration feature provided by KVM when running an emulated machine with the same architecture of the host.

First thing we have to do, is to check that the CPU we are using has support for virtualization. Unless you are running on a very old machine, this will surely be the case, but to verify it we simply run:

Scroll down the output of the command above until you see the list of CPU ‘flags’: among them you should see svm if you are using an Amd processor, or vmx if the CPU vendor is Intel.

The second thing we have to do, is to make sure that the needed kernel modules have been loaded, to check this, we run:

I’m running on an Intel CPU, therefore, in addition to the kvm module, also the kvm_intel one has been loaded. If you are using an Amd processor, the kvm_amd module will be loaded instead. If the modules are not loaded automatically, you can try to load them manually by using the modprobe command:

Finally, we have to start the libvirtd daemon: the following command both enables it at boot time and starts it immediately:

Now that we installed and started the libvirtd service, we can use the virt-install command to setup our virtual machine. The syntax of the program is really straightforward. The following linux command must be executed as root, or, if you want to launch it as a normal user, as a member of the kvm group. The syntax of the program is the following:

Let’s analyze the command above:

First of all we used the --name option: this is mandatory and it is used to assign a name to the new virtual machine.

The next option is the --vcpus one. We use it to specify the number of virtual cpus to configure for the guest.

The --memory option is used to select the amount of memory reserved for the guest machine in MiB and --cdrom lets us specify the path to a file or a device to be used as a virtual CD-ROM: it can be an ISO image, a CDROM device or a URL from which to access a boot ISO image.

The --disk flag is used to configure the media storage for the guest. Various comma-separated options can be specified, for example: size which is used to specify the size of the virtual disk in GB and path which is used to specify a path to use for the disk (it will be created if doesn’t already exists). If this options is specified, you must make sure that the target path is accessible and has the right SELinux context (to know more about SELinux you can read this article).

If the path option is not specified, the disk will be created in $HOME/.local/share/libvirt/images if the command is executed as normal user (member of the kvm group) or in /var/lib/libvirt/images if running it as root.

Next we passed the --os-variant option. While this is not mandatory, is highly recommended to use it, since it can improve performance of the virtual machine. The option will try to fine tune the guest to the specific OS version. If the option is not passed, the program will attempt to auto-detect the correct value from the installation media. To obtain a list of all supported systems you can run:

If everything went well and the virt-viewer package is installed, a window will appear showing the guest OS installer. 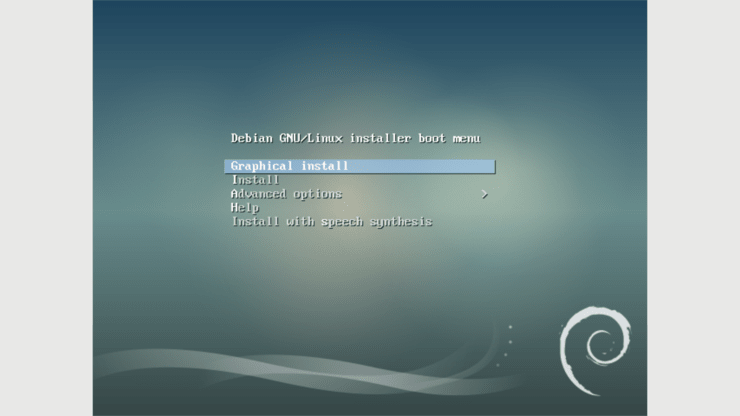 The virsh utility can be used to interact with virtual machines. For example, say you want to list all configured guests, using virsh you can simply run:

The output will show the id, name and state of all the configured guests, whether they are running or not.

But what if you want to change some guest machine parameters? You can use virsh to accomplish this task, for example:

Here is a screenshot of the command output: 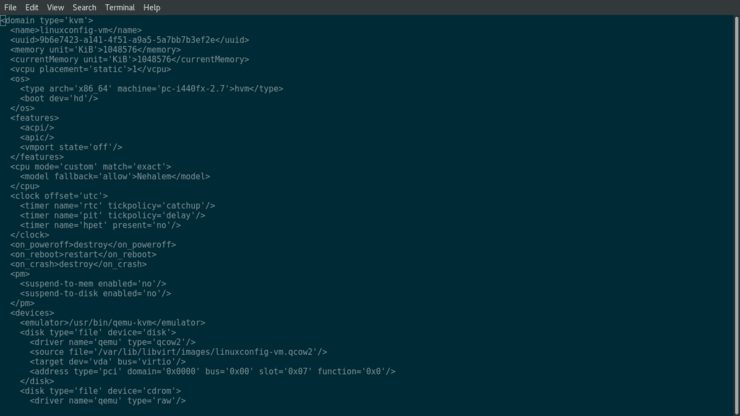 As you can see the output is an xml representation of the virtual machine properties, or, using virsh terminology, a domain. If you want to change, for example, the number of vcpus, you just have to find the relevant tag and change the value. In this case, we have:

We want to add 1 vcpu, so we will change it to:

All we have to do now, is just to reboot the virtual machine for the settings to be applied:

If we now run lscpu in the guest console, we should see the increased number of cpus: 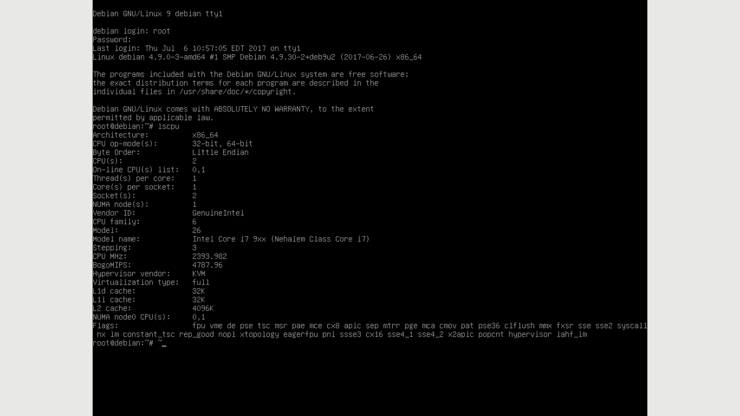 The virsh command can also be used to do other common operations: for example, virsh shutdown can be used to shut down the guest, virsh destroy is the equivalent of a brute force shutdown (therefore it can be dangerous) and virsh undefine can be used to delete a guest machine (to undefine a domain).

Autostart a virtual machine on boot

You can take advantage of the virsh command also if you want certain guests to be started automatically when the host system boots: the syntax it’s, again, very intuitive:

To disable this option, we run:

Another utility, virt-clone can be used to create a new virtual machine by cloning an existing one. To proceed, we must first ensure that the guest to be cloned is down, than we run:

What we have here is very simple to understand: we specified the guest to be cloned using the --original option and the name of the new guest using --name as if we were installing it from scratch. With the --file option, instead, we reference all the virtual hard disks associated with the original guest that we want to clone. The program will do its job, and, if successful, will create a new domain named linuxconfig-vm-clone. We already know how to verify it:

In this tutorial we configured a new virtual machine, and we saw how to interact with it. The options we specified at creation time, are just the minimal needed for a working setup. A lot of other options can be used to adjust several aspects of the guest machine and they are really well described in the virt-install manpage. As always, the best possible advice is: read the manual.