Dnf is the default high-level package manager in the Red Hat family of distributions, which includes Fedora, Red Hat Enterprise Linux and all its clones. It is the successor of Yum, and indeed using the yum command in recent versions of the distributions mentioned above, is just another way to call dnf. Dnf has a lot of nice features
and plugins which help us install, update and remove software packaged in the “.rpm” format. In this tutorial we explore dnf package groups and learn how to handle them. 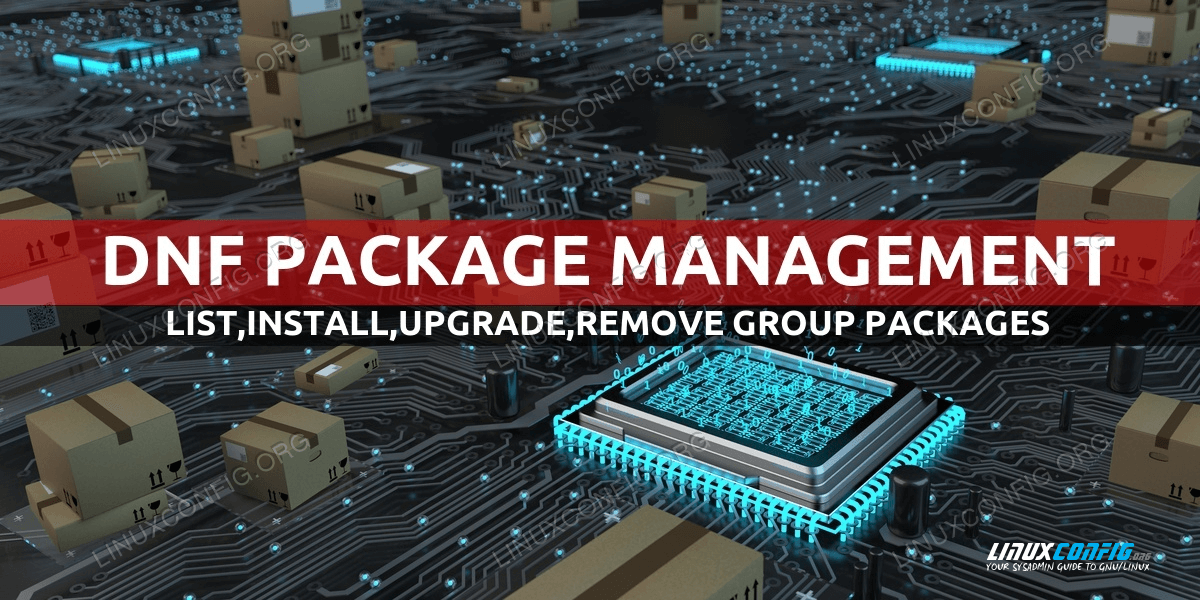 How to work with dnf package groups

What is a package group?

Let’s start by defining what a package group is. A package group is basically a “virtual” package. Here we call it “virtual” because it doesn’t provide a specific software per-se, but it references other “real” packages. We can
use package groups to install a “set” of packages with a single command. Say for example we need to install the packages needed to work with kvm virtual machines on Fedora: instead of installing each package singularly, we can just install the “virtualization” package group, which will cause all the needed software to be installed on our system.

Getting information about a package group

Before we install a package group, we may want to see what packages will be pulled in by it. To accomplish this task, all we have to do is to use the dnf group info command, passing the name of the package group we want to inspect as its argument. To see what the @virtualization package groups contain, for example, we would run:

Here is the output of the command above on a Fedora 34 system:

We can increase the verbosity of the command, and receive more detailed information by invoking it with the -v (short for --verbose) option:

In certain cases some packages that are part of a package group can be already present in the system. When we run the group info command with the -v option, as we did above, the packages that are part of the group and are not already installed will easily distinguishable, since they will be highlighted in the list. Here is the output of the dnf -v group info virtualization command after the virt-viewer package was installed singularly:

To list all the available package groups in the repositories of our distribution all we have to do is to run the following command:

The command above returns the list of all the known groups. We can, however add a series of options to modify its behavior. By default, the so called hidden groups are not included in the list. To make them show up all we
need to do is to add the --hidden option:

If we only want to obtain the list of all installed package groups, instead, we can use the --installed option:

So, how can we install a package group? There are two main ways: we can specify the name of the package prefixed with the @ symbol, or use the dnf group install command, as we already saw. The commands below are equivalent:

As we already said, only “Mandatory” and “Default” packages are installed by default. This default behavior, however, can be modified by using the group_package_types dnf option, either from command line or in the dnf
configuration file. Let’s make an example. Suppose we want to install only the packages that are part of the “Mandatory” section of a package group, we could run the following command:

If we don’t want to specify the option each time we run a command, we can set it permanently in the dnf configuration file, /etc/dnf/dnf.conf:

If we just want packages included in the “Optional” section of a package group to be included, we could also just add the --with-optional command line flag when installing a package group:

We can also have the chance to upgrade a package group. When we do so all the packages that are part of the group will upgraded together with the package group itself: this could potentially cause new packages to be installed
if they have been added to the group, or removed if they are not part of a group anymore and they have been not explicitly installed by the user. To upgrade a package group we use the group upgrade command, so, for example,
to upgrade the “Virtualization” package we would run:

In this tutorial we learned about package groups. We saw how to get information about a specific package group in the distributions which uses dnf as package manager, such as Fedora and Rhel, how packages which are member of a package groups are divided into sections, which of them are installed by default, and how we can modify this
behavior. Finally, we learned how to install, upgrade and remove a package group.