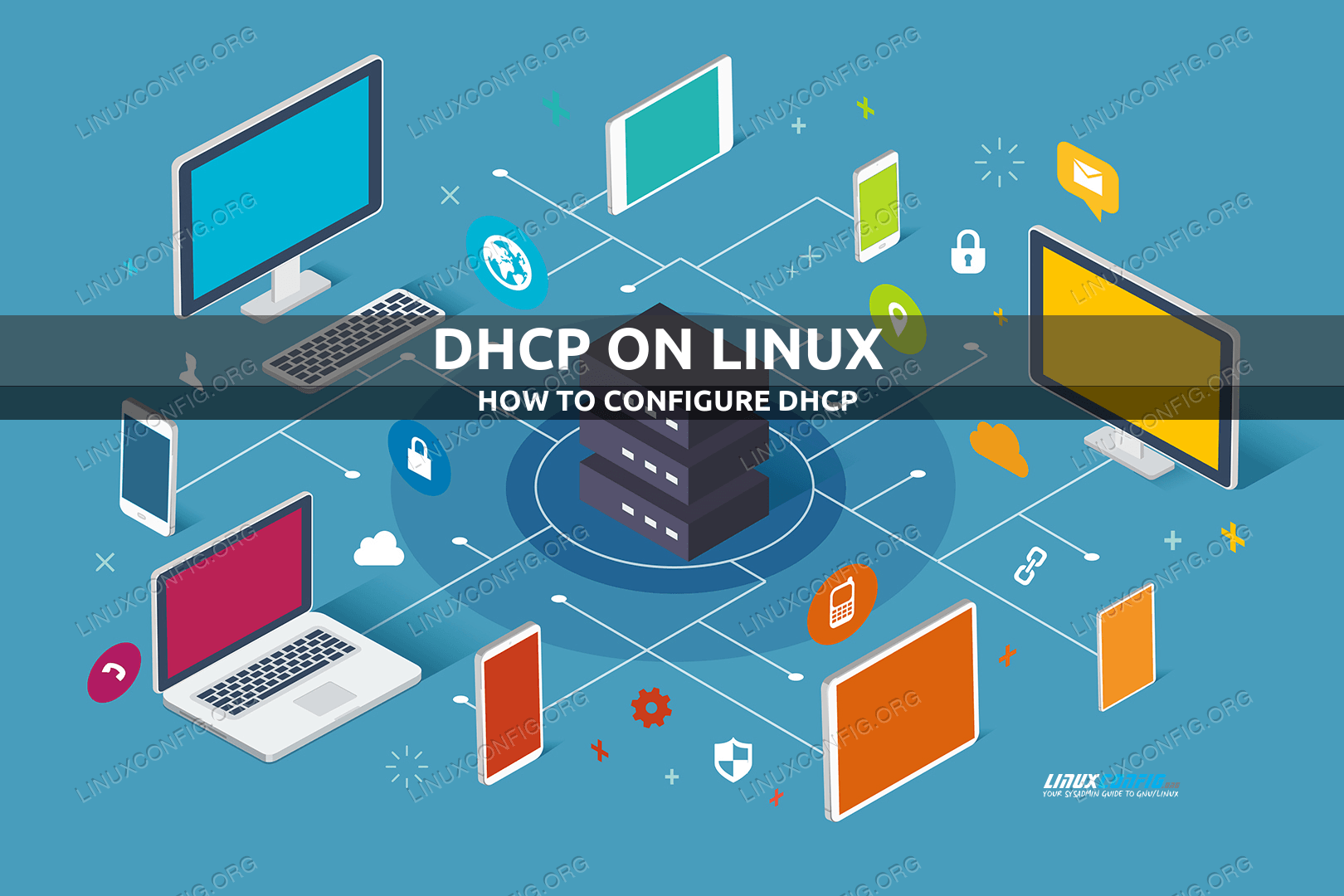 How to configure DHCP on Linux

Anyone with a basic knowledge of computer networking knows that for two hosts to communicate on the same network using TCP/IP model, both hosts need to have a unique IP address. There are two ways on how any given host on your network can obtain an IP address.

One way is to manually configure the network interface and assign an IP address by hand. The manual network configuration is called static configuration, which means that a host’s IP address does not change unless it’s changed manually by the user or system administrator. If your company network includes more than 1000 hosts, the job of configuring each host with a static IP address becomes tiresome and more importantly extremely inefficient.

Another way to assign your network hosts with a proper IP address regardless of the actual network size is to assign an IP address to each host automatically. To perform an automatic host’s IP configuration is where DHCP ( Dynamic Host Configuration Protocol ) comes handy.

The DHCP protocol lets a DHCP client, that is your network host to lease network configuration parameters such as an IP address. In fact, lease parameters are not limited to IP addresses only as they may also include the following configuration settings:

DHCP server keeps a record of all leased IP addresses and stores them in a file called dhcpd.leases within /var/lib/dhcp directory ( location of this file may vary depending on Linux system in use ). Having such a file allows DHCP server to keep track of all IP address leases even after the reboot or power failure.

Here are some advantages of having a DHCP server connected to network:

Use the appropriate Linux command below to install DHCP with your Linux distro’s package manager.

To install DHCP on Ubuntu, Debian, and Linux Mint:

To install DHCP on CentOS, Fedora, AlmaLinux, and Red Hat:

By default, DHCP server configuration does not include any subnets on which DHCP server should lease IP addresses. Therefore, depending on your Linux system you may get the following error message when you attempt to start DHCP with the default dhcpd.conf configuration file.

Your server may be connected to multiple network subnets. To start DHCP server, at least one subnet must be defined within the DHCP configuration file /etc/dhcp/dhcpd.conf.

NOTE
If your server has access to more than one subnet, DHCP requires all subnets to be defined even though there isn’t immediate intention to enable DHCP service on that subnet

Below is the simplest example of DHCP configuration file:

Use nano or your favorite text editor to make this change below all the commented lines. 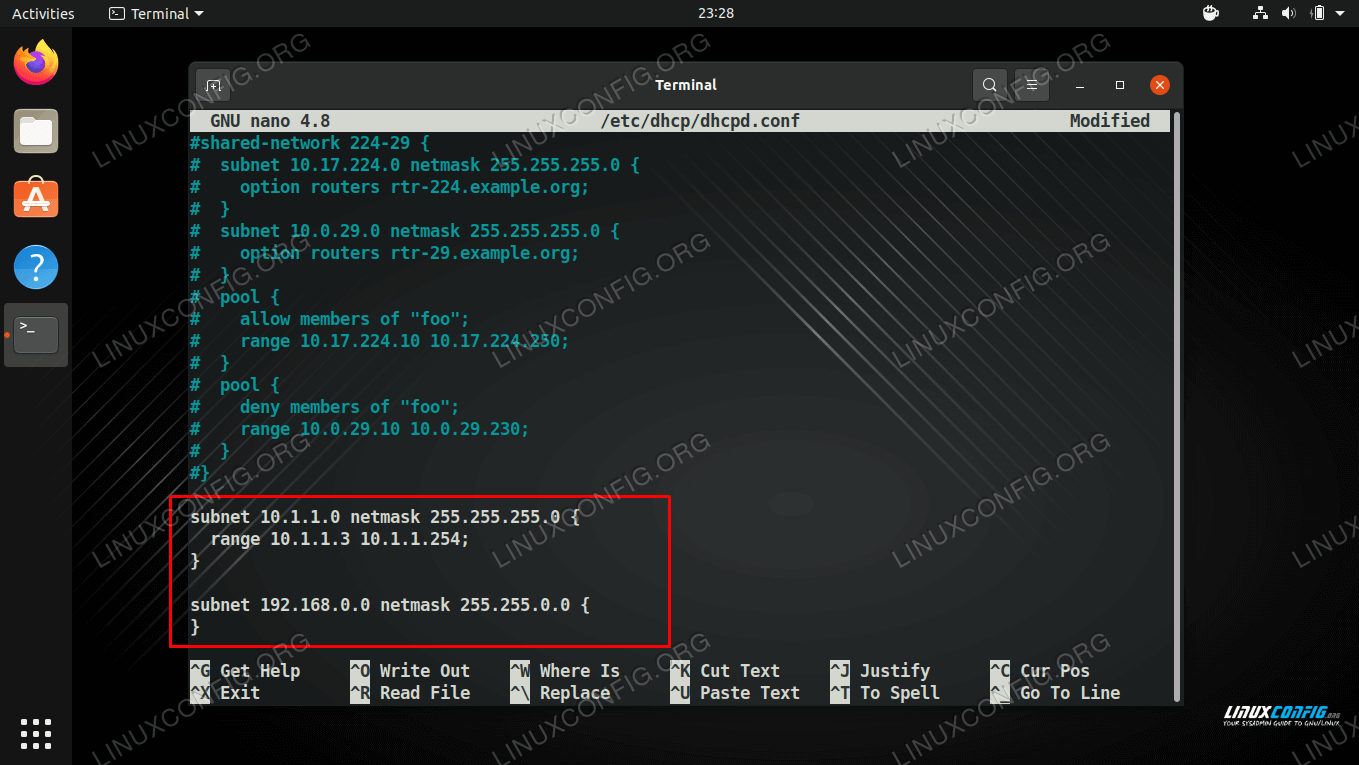 A basic configuration for our DHCP server

Alter the above code with your subnet and insert it into /etc/dhcp/dhcpd.conf. When ready, restart your DHCP server with ( restart command may vary ) :

At this point we can add a few additional settings to our DHCP configuration, namely the default and max lease time expiry.

Another configuration parameter possible to be set by DHCP server to its client is a definition of DNS server. If you want your clients to use DNS server with an IP address 8.8.8.8 (Google DNS server) and 10.1.1.1 you can do it by including an option domain-name-servers to DHCP’s configuration file.

DHCP also allows for a client’s gateway configuration. To set any client on the local network to use default gateway 10.1.1.1, add line option routers 10.1.1.1 into dhcpd.conf file as demonstrated below: 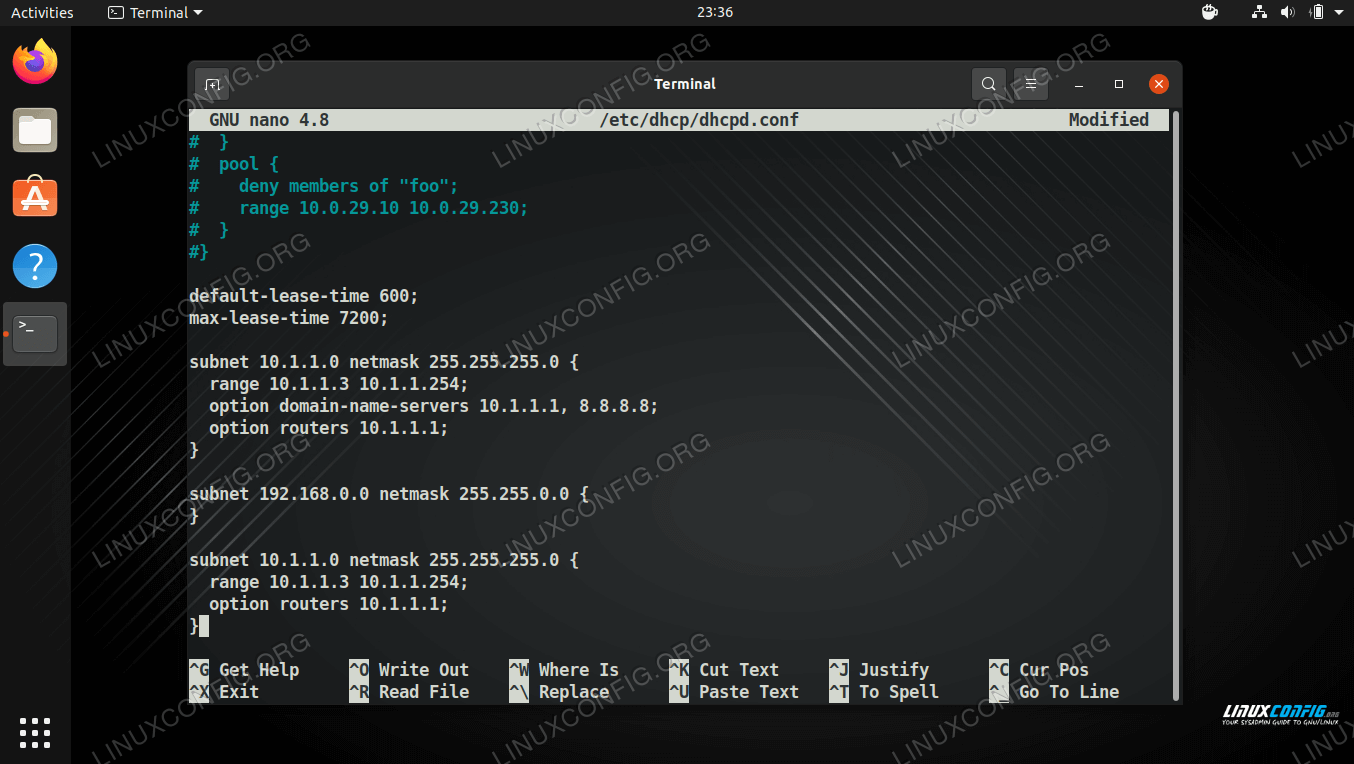 There may be a need to set static IP address to a particular host on the network such as printer, web server and etc. In this case it is possible to amend DHCP server configuration to lease a choosen IP address to a specific host defined by its MAC address.

To configure your client to use a DHCP on a network interface eth0 on Ubuntu or Debian Linux systems enter the following lines in your /etc/network/interfaces file:

If your DHCP server does not have an access to some particular subnet it does not mean that it cannot provide its services there. To make this work, a DHCP relay agent needs to be configured on a remote subnet which forwards all request to a specified DHCP server and distant subnet. First install DHCP relay agent:

Then create a configuration file /etc/default/isc-dhcp-relay with two lines:

The above config file will instruct DHCP relay agent to listen on eth0 interface for a DHCP client requests and forward them to a DHCP server with an IP address 192.168.5.5.

ISC DHCP server is backward compatible with BOOTP. The following is a BOOTP client declaration to be defined in DHCP’s main configuration dhcpd.conf file:

In this guide, we learned how to implement a DHCP server on a Linux system. This will allow you to automatically assign IP addresses to any device on your network. We also saw how to reserve IP addresses to certain devices based on their MAC address, as well as configure DNS servers, default gateways, etc. As you can imagine, setting up DHCP and configuring these settings one time is a lot easier than manually configuring many different systems with the same information.