What is Google Chrome

In short, a Google Chrome is a Internet web browser developed by Google, Inc .. Google Chrome is based on an open source project Chromium. On 2nd September 2008 Google chrome was released for a MS Windows operating system only and later further binaries were compiled for MAC OS as well as for Linux operating system. There are multiple privacy concerns when it comes to a Google Chrome browser such as what data are collected during the Internet browsing and using omnibox to search the Internet.

Google Chrome's source code is free software but binaries which a Google chrome is distributed with are under restrictive BSD license.When it comes to a Linux operating system a Google Chrome browser comes in the form of a pre-compiled DEB or RPM packages. Installation of Google Chrome from a DEB or RPM packages requires a root password which is used to modify some crucial system configuration files such as an apt repository list as it is in case of the Ubuntu Linux System. Installation of Google Chrome browser on the Ubuntu Linux operating system also involves an injection of Google, Inc. Linux Package Signing Key into an apt key ring which gives Google a chance to install virtually anything into user's Linux operating system via google-chrome-stable package since no additional involvement by system administrator when updating this package is required. However, as shown later in this article a system administrator has an option to black list Google Chrome package from automatic updates. Surely, when it comes to a privacy Google Chrome is no match to GNU IceCat web browser.

This is an opinion of Richard Stallman on privacy dangers when using Google Chrome:

The license for those binaries is unacceptable for several reasons.

For instance, it says you give Google the right to change your software and requires you to accept whatever changes they decide to impose. It purports to forbid reverse engineering.

You can navigate to a google website, accept Google Chrome's Terms of Service to download Google Chrome Browser binary or simply download it by using wget and the link below to fetch pre-compiled "deb" package from a google mirror.

Download link for a Google Chrome stable i386 architecture:

Once you have downloaded a Google chrome pre-compiled binary Deb package all what needs to be done to install it on your Ubuntu Linux is to navigate to your download directory and execute dpkg -i command and supply a Google Chrome's package name as an argument. All Google Chrome prerequisites should be already installed with your default Ubuntu installation.

Google chrome installer had additionally created few symbolic links to integrate the browser to our GUI environment and for this reason Google chrome browser can also be started from a command line using these alternative commands:

The preceding commands are symbolic links all the way to the actual Google chrome executable binary located within /opt/google/chrome/google-chrome For example, /usr/bin/gnome-www-browser points to /etc/alternatives/gnome-www-browser which points to /usr/bin/google-chrome which leads to /opt/google/chrome/google-chrome and therefore, any of the listed commands can be used to successfully start Google chrome browser. Additionally, upon the first start of Google chrome browser a ~/.config/google-chrome/ directory will be created, which will store all users individual browser settings.
Google Chrome will then generously offer you a choice to choose your default search engine to search the web using the omnibox. This is kind of nice o have a choice, and it proves that Google is not afraid of its direct competitors since Google knows that its position on the search engine market will be not that easily shaken.
Select a default search engine for Google Chrome: 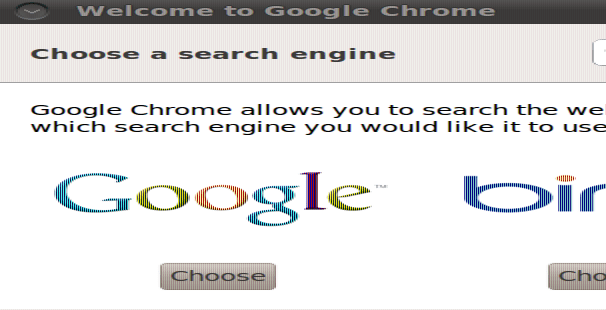 If, for some reason, you have decided that a Google Chrome browser is not a good choice for a default browser, or you wish to set Google chrome browser to be a default one open up a terminal ad use a following command to make your selection:

How to update Google Chrome on Ubuntu Linux

The good thing is that this makes Google Chrome update a very easy task. The bad is that you never know what the necessary updates are, and therefore, you had allowed Google to install virtually anything on into your system. This can be considered as a privacy issue since Google Chrome and its Chronium source code is free software, but the actual Google Chrome binaries are under a restrictive BSD license. To see an apt "Google, Inc. Linux Package Signing Key" execute a following linux command:

As it was already mentioned the Google Linux Package Signing Key and Google repository listed in /etc/apt/sources.list.d/google-chrome.list make the update of Google Chrome browser trivial task. You can either use a synaptic package management tool or to execute following apt-get commands to update Google Chrome browser:

It should be also mentioned that execution of:

This will upgrade all packages in your Ubuntu Linux system as well as it will also update Google Chrome browser package.

We may also wish to disable Google Chrome automatic updates, so we can update Google Chrome package manually. To do this, we first need to install unattended-upgrades package if it's not already present on your Ubuntu system:

In the next step to disable Google Chrome automatic updates we need to add / edit a following block of code into /etc/apt/apt.conf.d/50unattended-upgrades ( root access required ):

In this section, we will cover several interesting Google Chrome command line switches / options to tweak in some way default browser's behavior as you can include them by editing your google Chrome start up icon command in "Applications->Internet->Google Chrome".

In this mode, all pages, you visit will not appear in your browsing history or search history, and no traces such as cookies, download history and bookmarks will not be preserved once you close the incognito window. You can also enter Google Chrome incognito mode after you start google chrome browser by CTR+SHIFT+N key combination.

This will set http://linuxconfig.org as a home page after Google Chrome start up.

When using --start-maximized switch a Google Chrome browser will in start maximized window.

This switch will restore your last session when when you start your Google Chrome browser.

How to uninstall Google Chrome from Ubuntu Linux

Now simply purge the package from your system with:

The above command will remove a Google Chrome binaries from /opt/google/chrome directory, the /opt/google/chrome directory itself and it also will remove /etc/apt/sources.list.d/google-chrome.list the Google apt repository. However, even though we used -P option to purge google-chrome-stable package, including configuration files the apt Google Linux Package Signing Key was not removed since execution of a

and use the above key ID to remove it from the system by:

Next you may want to remove a google chrome configuration directory from you home directory:

Google Chrome is a surely powerful, very user friendly and intuitive browser. Google is propagating it's browser via it's own advertising adwords network which enabled Google Chrome to cut nice usage share on the Internet Browser market within a short period of time. Even though Google Chrome browser imposes some privacy issues many Internet surfers opt to use this browser as privacy concerns are pointed out for almost all web browsers Internet wide. Installation of Google Chrome extensions brings Internet browsing with this browser into a completely new level as it rapidly enhances browser features.