In this article you will learn about some Ubuntu 22.04 features of the upcoming Ubuntu stable release. Canonical’s latest iteration to the Ubuntu operating system is Ubuntu 22.04 Jammy Jellyfish. Ubuntu 22.04 release date is scheduled on April 21, 2022. This is an LTS (long term support) release – the type of release that Canonical only publishes every two years, and continues to support for the next five.

In this article, we’re going to go over some of the features we’re most excited about, and cover a lot of the differences between Jammy Jellyfish and Ubuntu’s previous LTS release, Focal Fossa. Read on as we take you through some of the upcoming changes.


As an Ubuntu user, it’s recommended to use the latest Long Term Support release. These releases are tested, stable, and secure iterations of Canonical’s beloved Ubuntu operating system. And yes, they are always free. You can upgrade your system with confidence when switching to the newest LTS release.

Contrast this with Ubuntu’s interim releases – like 21.10 Impish Indri – which are inherently short-lived and less stable versions of Ubuntu that developers and enterprises can use to test the upcoming features expected in the LTS release of the operating system. As with any other LTS releases the Ubuntu 22.04 Jammy Jellyfish will receive 5 years official support until 2027.

Below you can find list of some important dates relating and leading to the final Ubuntu 22.04 Jammy Jellyfish release which is scheduled to April 21, 2022

If you’re ready to use Ubuntu 22.04 Jammy Jellyfish, you can either upgrade your current Ubuntu system or download Ubuntu 22.04 and install it from ISO. There are multiple flavors already available for download such as: Kubuntu, Lubuntu, Xubuntu, Ubuntu Mate and Ubuntu Budgie.

A new version of Ubuntu means there has been a few changes, but of course it has also remained faithful to the same old Ubuntu that you’ve come to know and trust for years. We’ll go over some of the new most noteworthy Ubuntu 22.04 features in the section below.

Ubuntu continues with the similar wallpaper colour design as in previous releases. The following are samples of a finale wallpaper designs for Ubuntu 22.04: 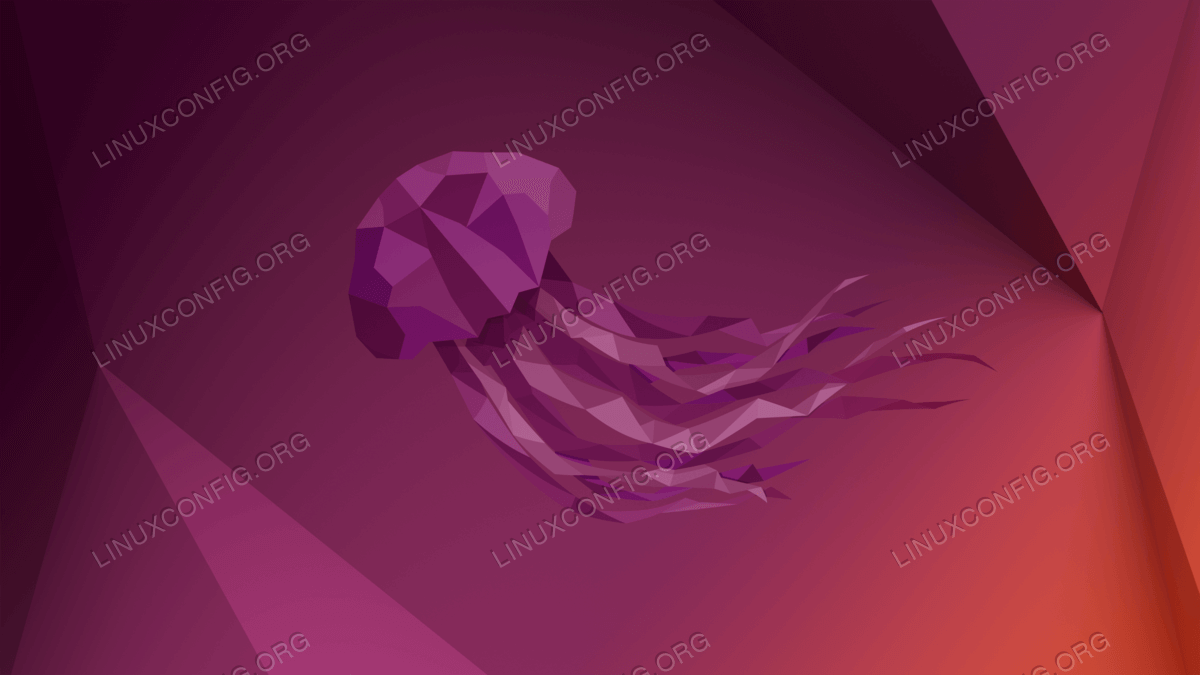 Ubuntu 22.04 may possibly ship with GNOME 42.0 installed. Of course, you will still have your choice to download Kubuntu, Lubuntu, Xubuntu, and a slew of other flavors, just in case you don’t like GNOME. The new version of GNOME has better settings with regards to colors and themes, including dark theme. The new dark theme is better respected across desktop applications and adheres to a standard of colors that make more sense.

GNOME 42 also makes use of libadwaita and GTK 4, so expect things to be looking a little different. The newest version of GNOME will introduce a new screenshot tool and text editor. Since Canonical employs a custom version of GNOME, we have to see if all these new settings will carry over to Ubuntu 22.04.  Yaru is a default theme for the Ubuntu Linux developed by user community. There will be new version Yaru GTK theme with a new option to choose an accent colour.

Updated Software & Updates utility will now include the Ubuntu Pro tab from where you can include three stations to your Ubuntu advantage account plus some other features to make your life when working with Ubuntu 22.04 easier.

Another feature which is most likely going to be applauded by a wider audience is a newly redesigned screenshot tool coming with the GNOME desktop. 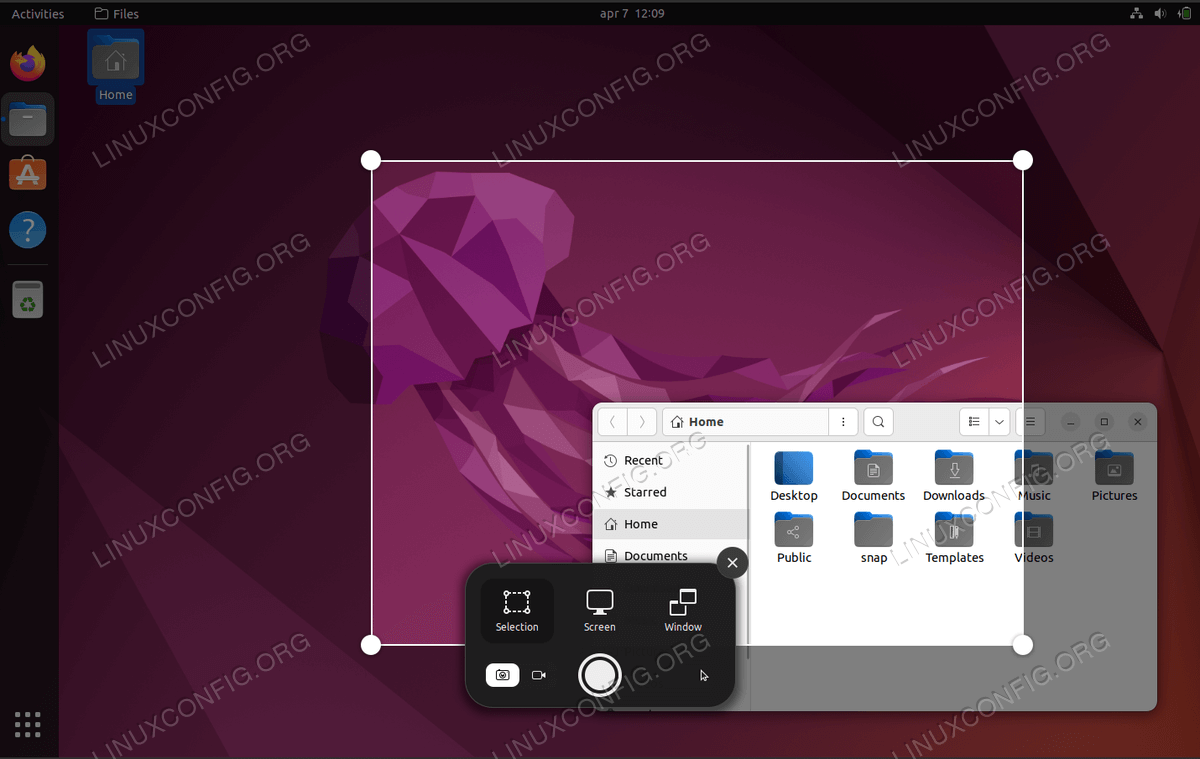 A new way to update firmware

For years, the Software Center in Ubuntu has handled the updating of firmware. With the release of Ubuntu 22.04, a new GUI application will be unveiled, which is really just a front-end for the fwupd command line utility. This is a right step in the direction of user friendliness and clarity about system updates.

The installation prompts for Ubuntu 22.04 are going to look a little different, because the installer itself has actually been completely revamped. It sports a much more modern and sleek look, while still reflecting the simplicity of Ubuntu. It was created using Google’s Flutter UI development kit.

The new Ubuntu 22.04 will support Raspberry Pi models with as little as 2 GB of RAM, something that it accomplishes through the use of zswap.

Ubuntu 22.04 makes the upgrade to PHP 8.1. This is mostly relevant for web developers that like to program in the PHP language. Jammy Jellyfish gives coders easy access to the latest interation of PHP, so they can keep up with the always-changing web technology.


A new standard for OpenSSL was released in September 2021. This will be the new version included in Ubuntu 22.04, which will increase security with regards to encryption and man in the middle attacks on the new operating system.

Ruby programmers will be delighted to know that Ubuntu 22.04 has made the upgrade to Ruby 3.0, which was officially released back in 2020.

The Go programming language is quickly sweeping the tech world. Canonical has recognized this and included Golang 1.18 with the latest version of their operating system, Ubuntu 22.04 Jammy Jellyfish.

Python 3.10.0 version will be shipped as a default with Ubuntu 22.04. However, as always this does not mean that you cannot install and change to any Python version you see fit for your programming needs.

There’s a new version of grub, which isn’t very noteworthy by itself, but it may effect some users that have a dual boot system, including Windows or other Linux distributions. Grub 2.06 won’t automatically probe for other OS installations and add them to the boot menu. Luckily, there’s a simple fix of adding GRUB_DISABLE_OS_PROBER=false to the /etc/default/grub file and then running sudo update-grub.

We’re not sure if this is an oversight on the developer’s part, or just a new “feature.” It may actually be fixed (read: reverted to its normal behavior) by the time Ubuntu releases. Until then, dual booters beware.

You can expect the GCC compiler version 11 shipped with Ubuntu 22.04. To read what’s new in GCC 11 navigate your browser to the following GNU GCC update page.

Ubuntu 22.04 release will include a new Mesa 22 graphics library. Mesa is an opensource software graphics library and includes the OpenGL and Vulkan drivers as well as other graphics API specifications.

The Kernel 5.15 will come with many new features which includes a new NTFS file-system driver called NTFS3. This will make Ubuntu 22.04 much more compatible with drives formatted for Windows NTFS drives.

A new In-kernel SMB server will provide faster file sharing and more features for Samba servers, which is ideal in a mixed ecosystem of Linux and other types of operating systems.

Of course, new hardware support for AMD CPUs and GPUs, Apple’s M1 chip, Intel Alder Lake CPUs, and other hardware will also be included, along with various other features and improvements.

The latest daily builds of Ubuntu 22.04 have a notification pop up upon login, asking the user if they would like to enable Ubuntu Pro. Fortunately, there is an option to select “Don’t remind me again” in order to suppress this nag, which will be irrelevant for normal users.

Ubuntu Pro has historically been a support program for AWS customers. But now it looks like Ubuntu Pro may also tie in with Ubuntu Advantage in the future, from what we could observe after enabling Pro on our test system. Ubuntu Pro will also give the user access to Livepatch (install security updates without the need to restart) and extended security maintenance.

Although Ubuntu 22.04 release date is only two new years newer than the previous LTS release, technology moves fast and there have been many improvements made. And while most of these changes take place under the hood, Ubuntu 22.04 features new look and smooth feel is unmistakable, even to the most casual of users.

This article explained Ubuntu’s release schedule and touched on some of the most major changes coming to Jammy Jellyfish. We like the new version of Ubuntu and are excited to see its widespread adoption. Stick with us for more guides on Ubuntu 22.04, as we continue to poke around and share our findings with you.