The BitTorrent protocol is used for peer to peer file sharing and it’s an extremely efficient way of downloading and sharing files with groups of people. While file sharing with BitTorrent is normally associated with video files like movies or TV episodes, it’s also common for Linux developers to offer a torrent download of their distribution.

Torrents are great for downloading large files because they are split into smaller chunks and downloaded from multiple peers in the torrent “swarm.” Being able to download from a lot of different sources simultaneously should mean that your download bandwidth is completely saturated, resulting in a very quick download of large files. When all of the file chunks are done downloading, the file is reconstructed automatically.

In order to download something via BitTorrent, you need to have a torrent client installed on your system. On Ubuntu 20.04 Focal Fossa, there are quite a few options to choose from. Some have a graphical interface and some only work on the command line, but they all have their advantages and quirks. In this article, we’ll go over some top picks for torrent clients to help you choose the right one for your needs. We’ll also show how to install each of them and open up a .torrent file. 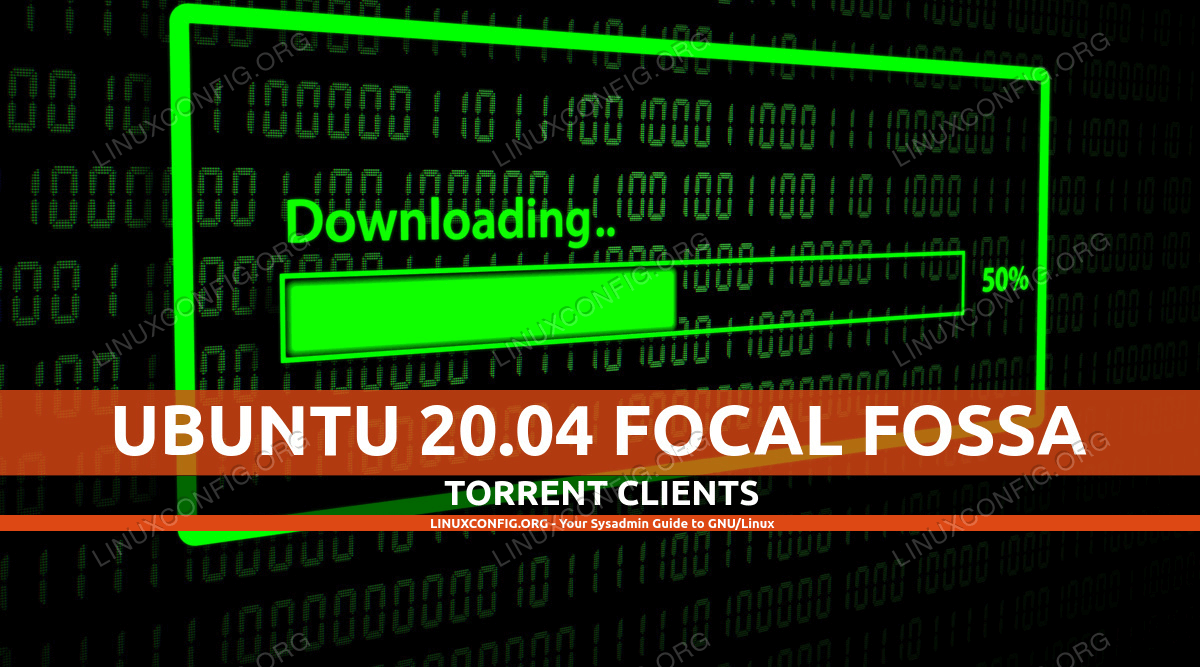 We’ll first cover a list of torrent clients with a graphical interface front end. If you’re more interested in command line options, scroll down to the next section.

Once it’s installed, you can open it from the application launcher or just type this command in terminal: 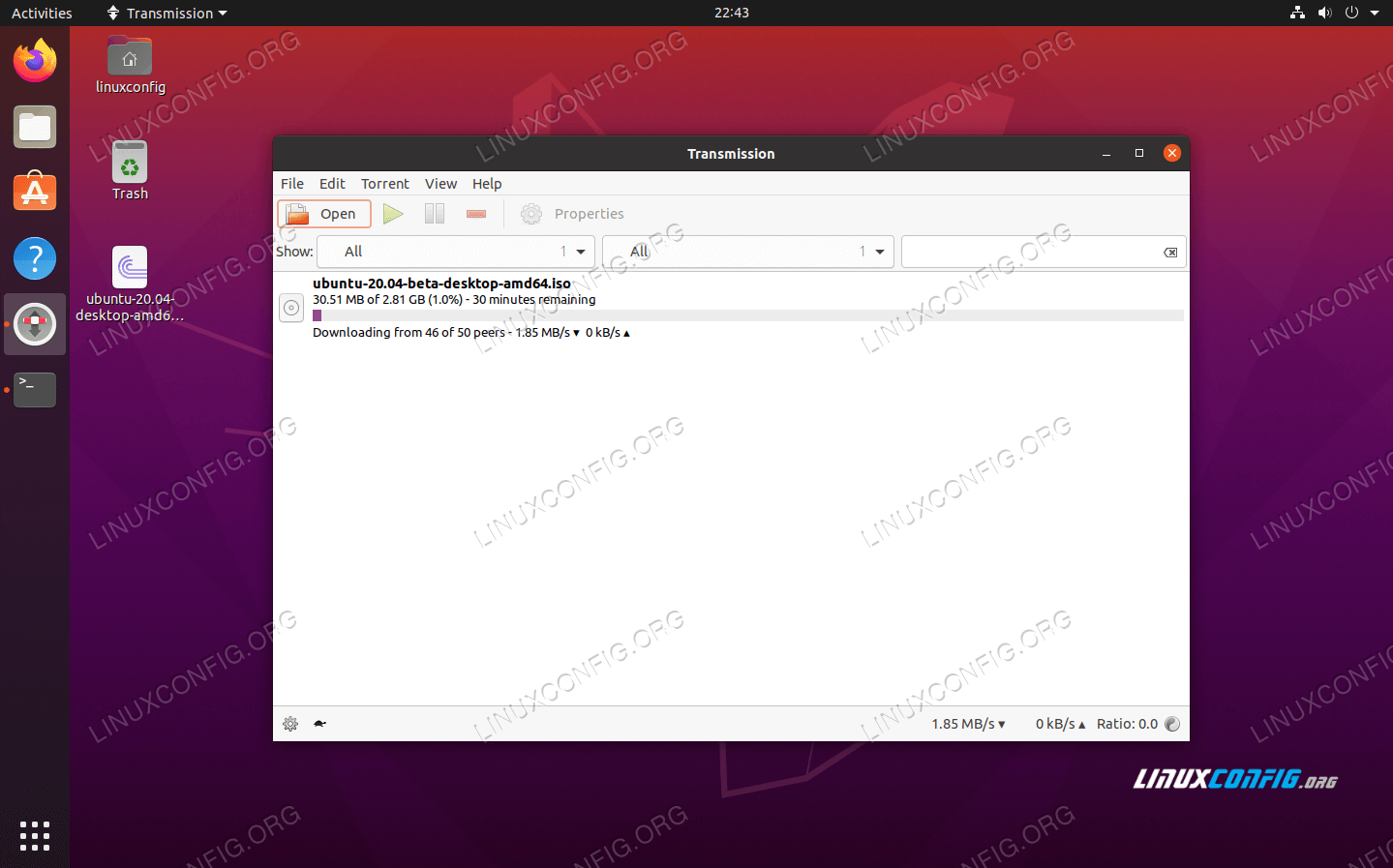 The advantages of Transmission are that you probably already have it installed and it’s a simple, no-frills torrent client. If you’re just looking to occasionally download a torrent, this client is a good choice. 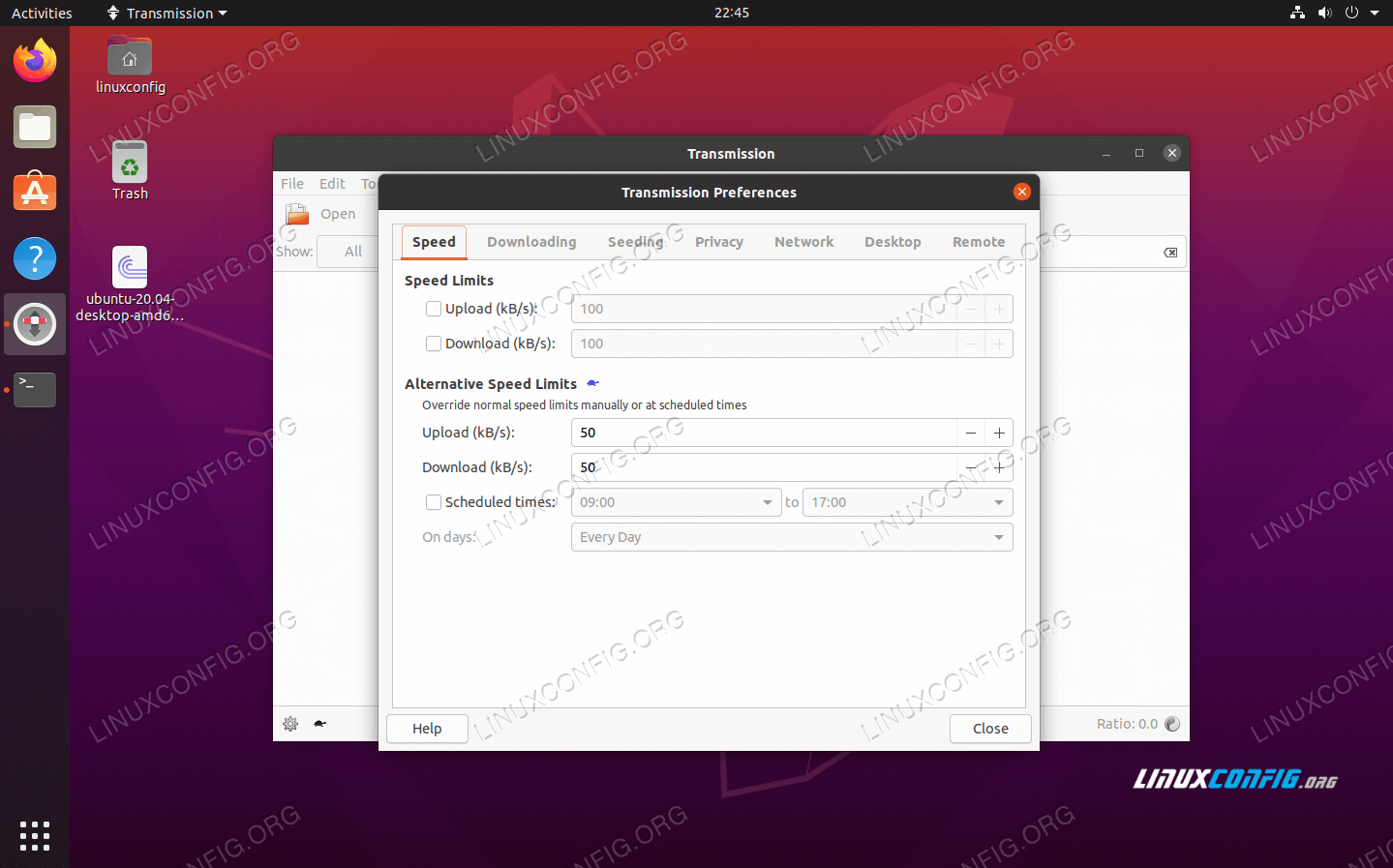 Deluge is another GUI torrent client for Ubuntu 20.04. It has a lot of features, and therefore is definitely a bulkier install than Transmission. Still, it maintains a clean looking interface. If you’re looking for a lot of customization and fine tuned control, Deluge is a good call. You can install it with the following command:

When it’s done installing, find the program in Ubuntu’s application launcher or type this command in terminal to open it: 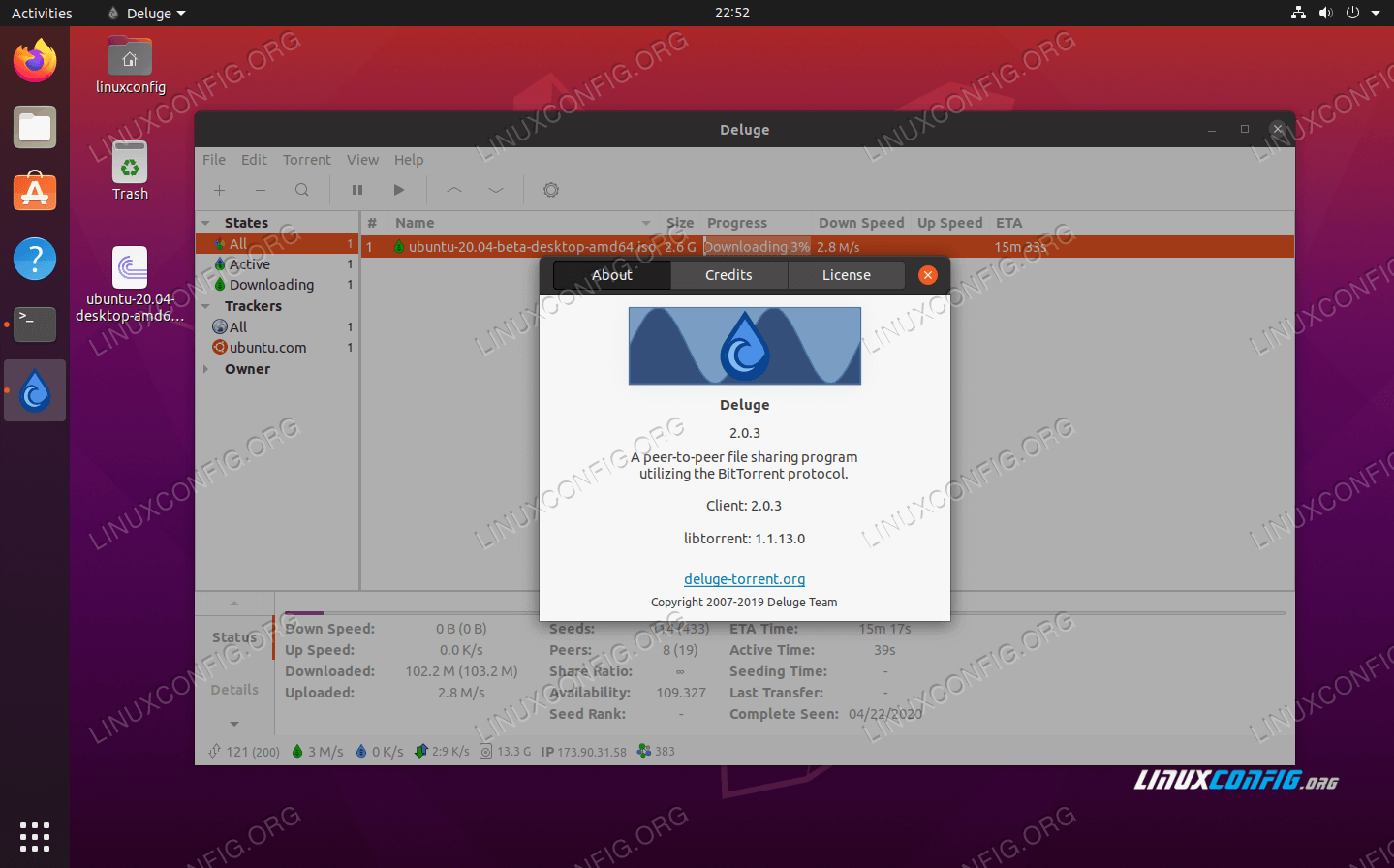 Deluge has a lot of options in the preferences menu. It’s definitely geared towards users who torrent files on a regular basis. 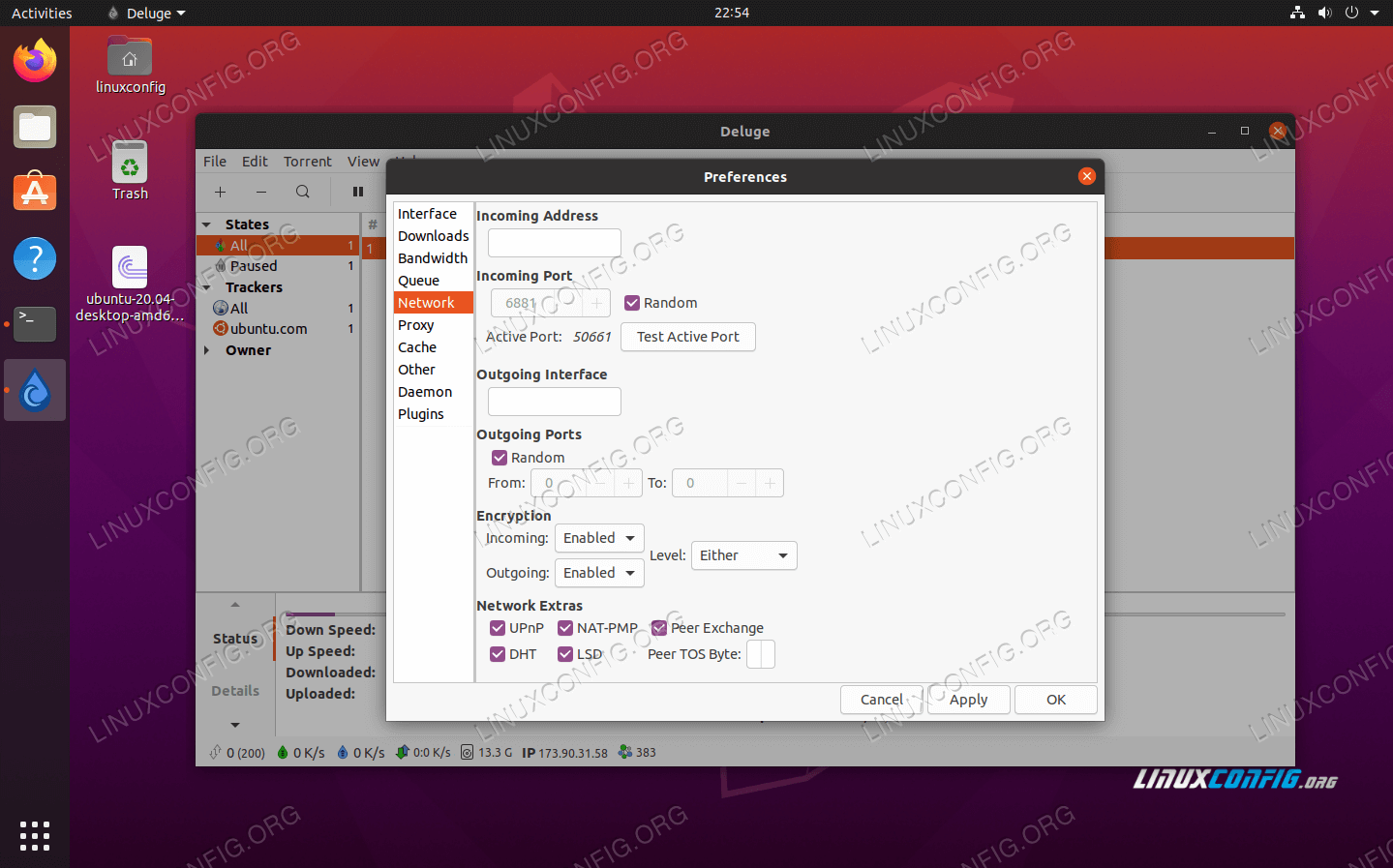 The options menu in Deluge is quite extensive

Ktorrent is the default torrent client for the KDE plasma desktop environment. If you already use KDE desktop, then you should see Ktorrent in the app menu. However, you can still use Ktorrent on GNOME or any other desktop environment – but note that there will be a lot of dependencies and extra packages installed on these other environments when you install Ktorrent.

It has a nice looking interface and is pretty intuitive to use. I’d put it somewhere between Transmission and Deluge. You can install it from terminal with the following command:

After it’s installed, open it from the application launcher or execute the following command in terminal to open it: 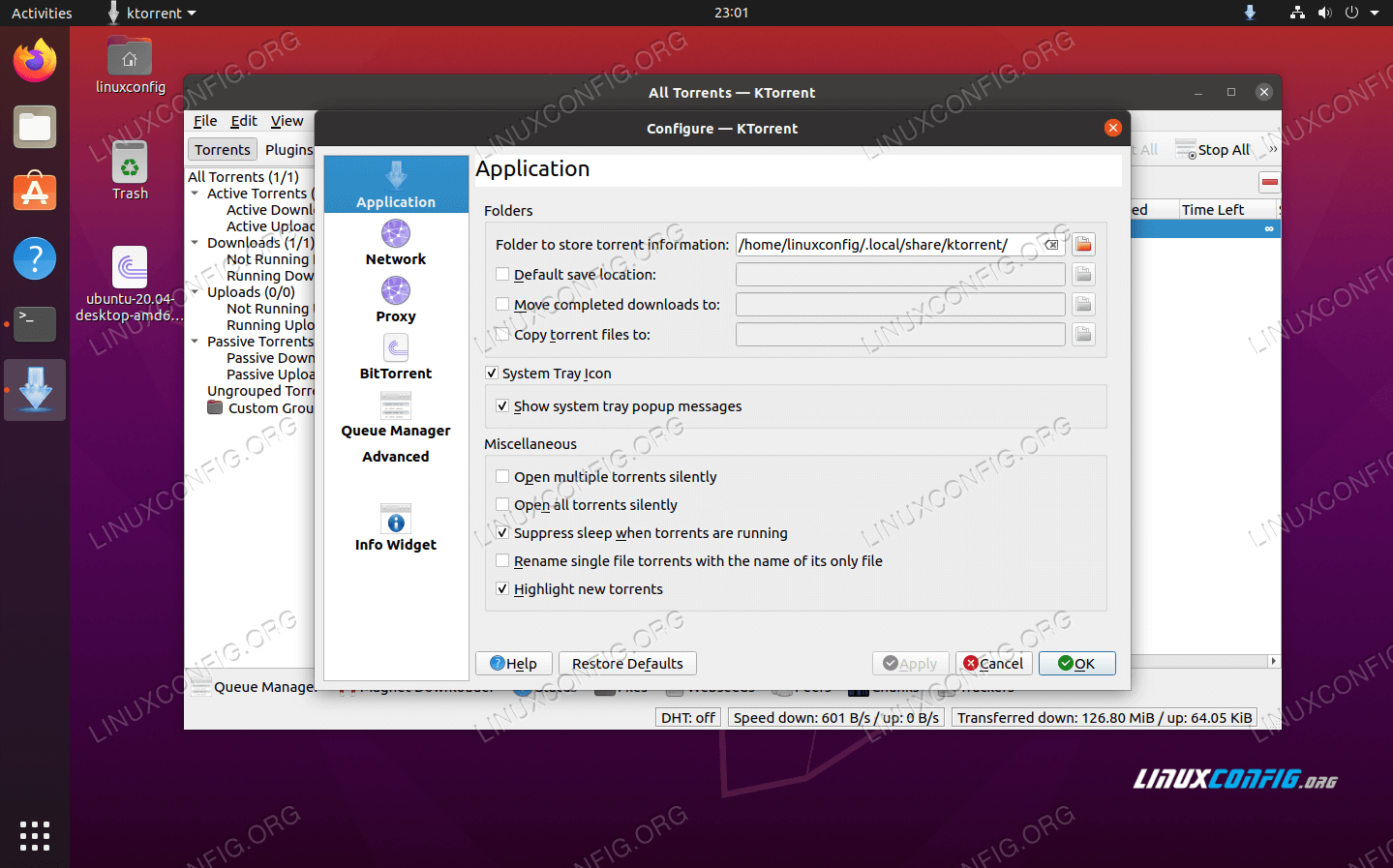 qBittorrent is yet another torrent client available from the Ubuntu 20.04 software repository. It’s a notch or two behind Deluge in the features department, but it’s a lightweight install with a sleek and simple interface. qBittorrent is a great compromise between feature rich and lightweight. To install it, open a terminal and execute the following command:

Use your start menu to launch the qBittorrent client or run the command: 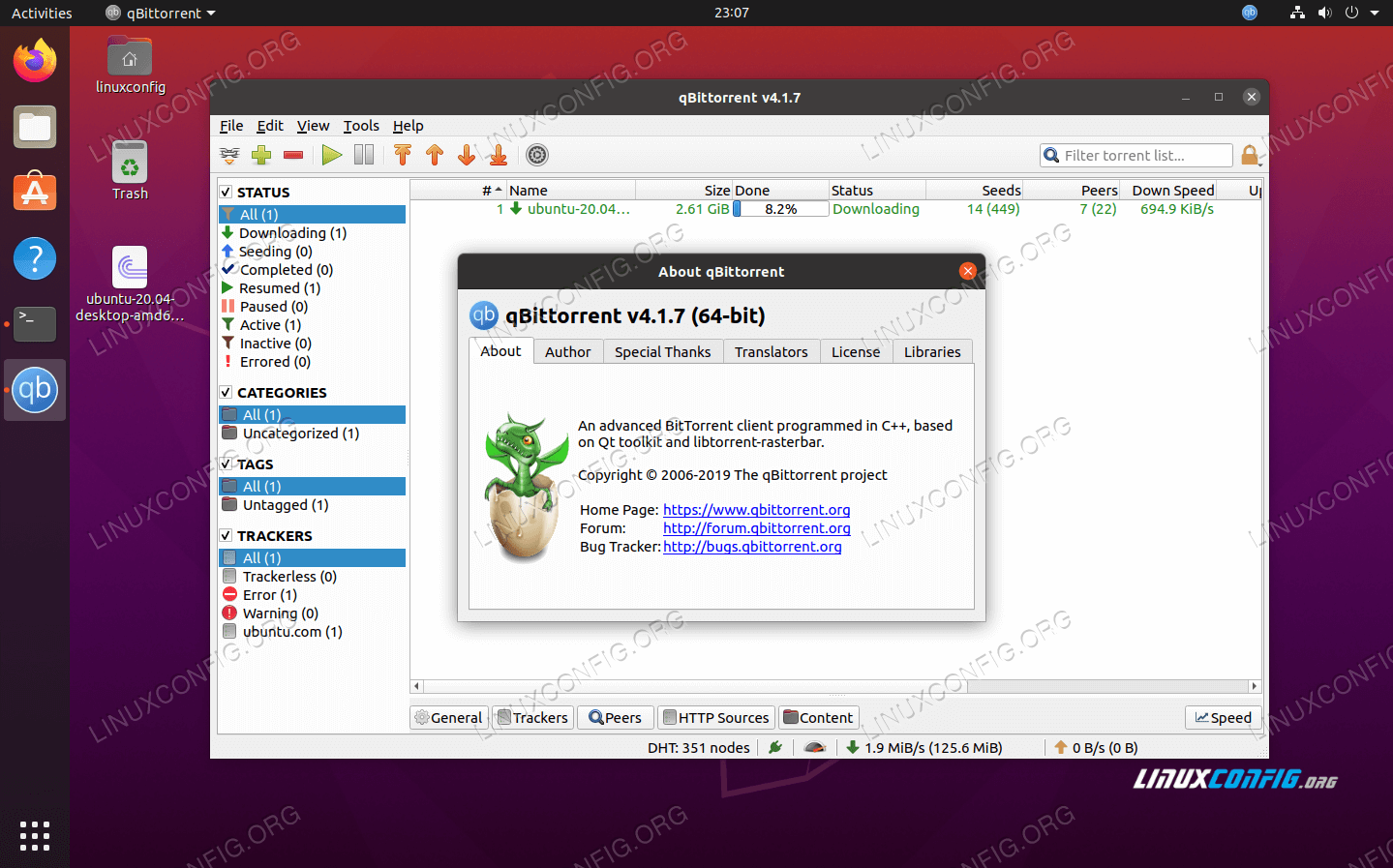 Though not the most feature rich of all the torrent clients, qBittorrent still offers a lot in the way of customization and control: 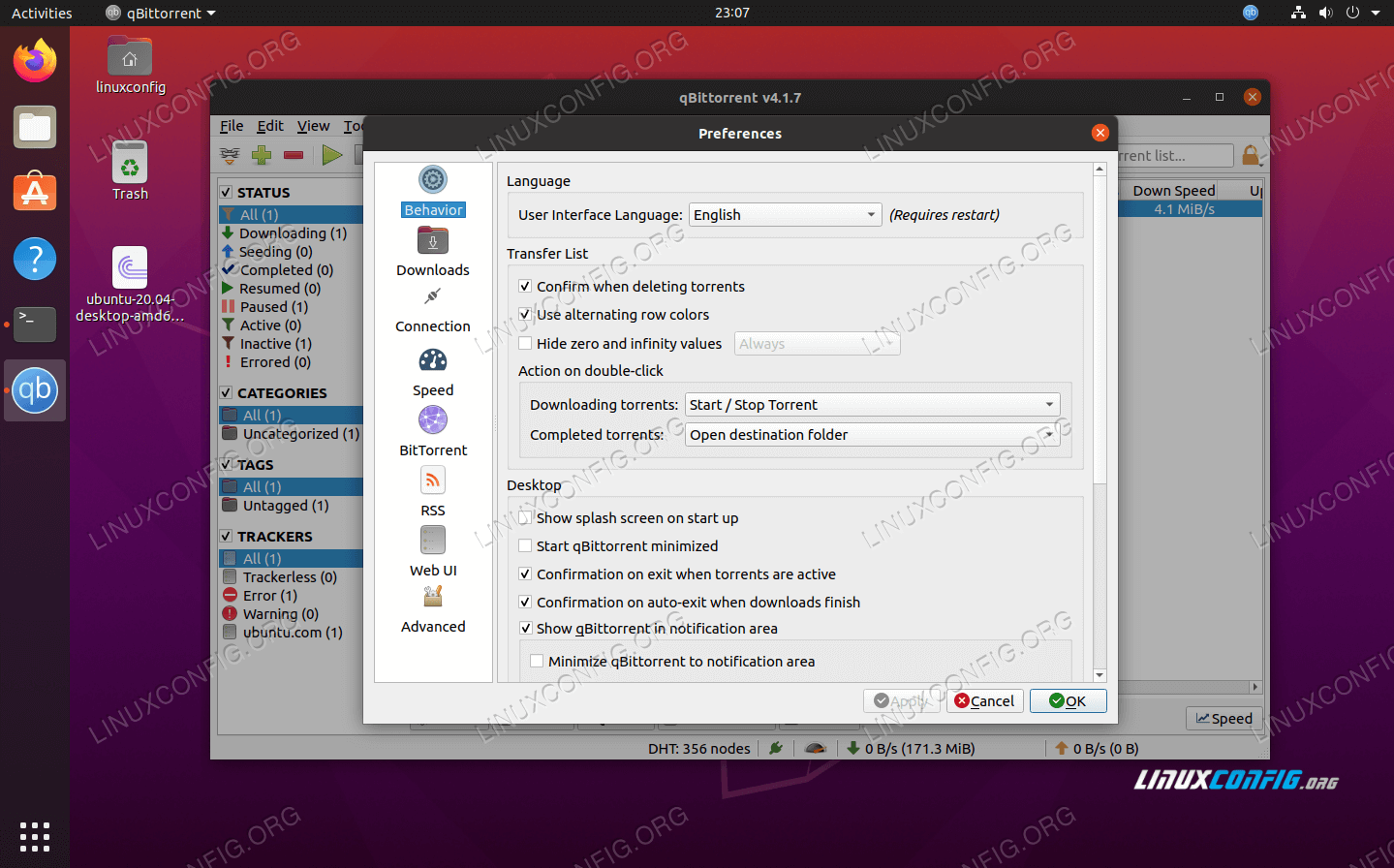 Just because you don’t have a GUI doesn’t mean you can’t run a torrent client. Even if you do have a GUI on your system, some Ubuntu users may still prefer a command line client for their extremely low overhead. Check out our top three picks below.

rTorrent is first on our list of command line torrent clients, and there’s a reason for that. I’ve worked with it personally and have seen it run thousands of torrents simultaneously without a hitch. It’s a great torrent client. If you’ve come this far down the article to the command line clients, chances are that you’re relatively serious about torrenting. If that’s the case, this is the one you want.

The other great thing about rTorrent is that you can easily install a web based front end for it with the rtpg-www package. So, you really get the best of both worlds: you get the efficiency of using a command line client but still have the option to interact with a GUI, should you choose.

You can install rTorrent in terminal with the following command: 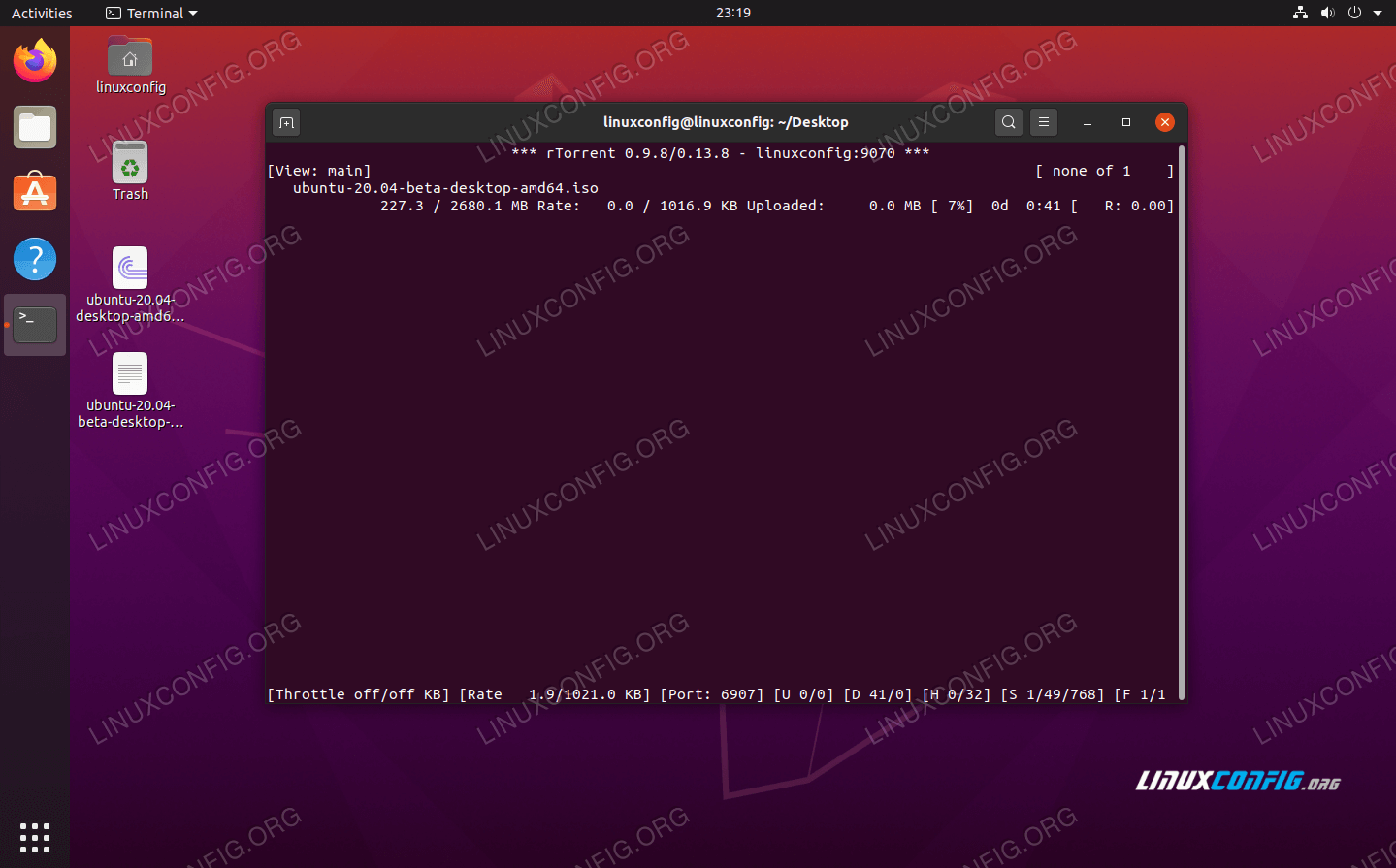 rTorrent running in a terminal window

You can close rTorrent with the CTRL + q key combination on your keyboard. Normally though, you’d run rTorrent (and other command line torrent clients) from within a screen session, and detach from that screen so that the client continues running when the terminal is closed.

Aria2 is another command line torrent client. It’s easy to use and gives you a very simple terminal output. This makes it very easy to monitor download progress, even for the uninitiated. To install Aria2 on Ubuntu 20.04, type the following command in console:

Once it’s installed, you can begin torrenting by issuing the aria2c command on a .torrent file: 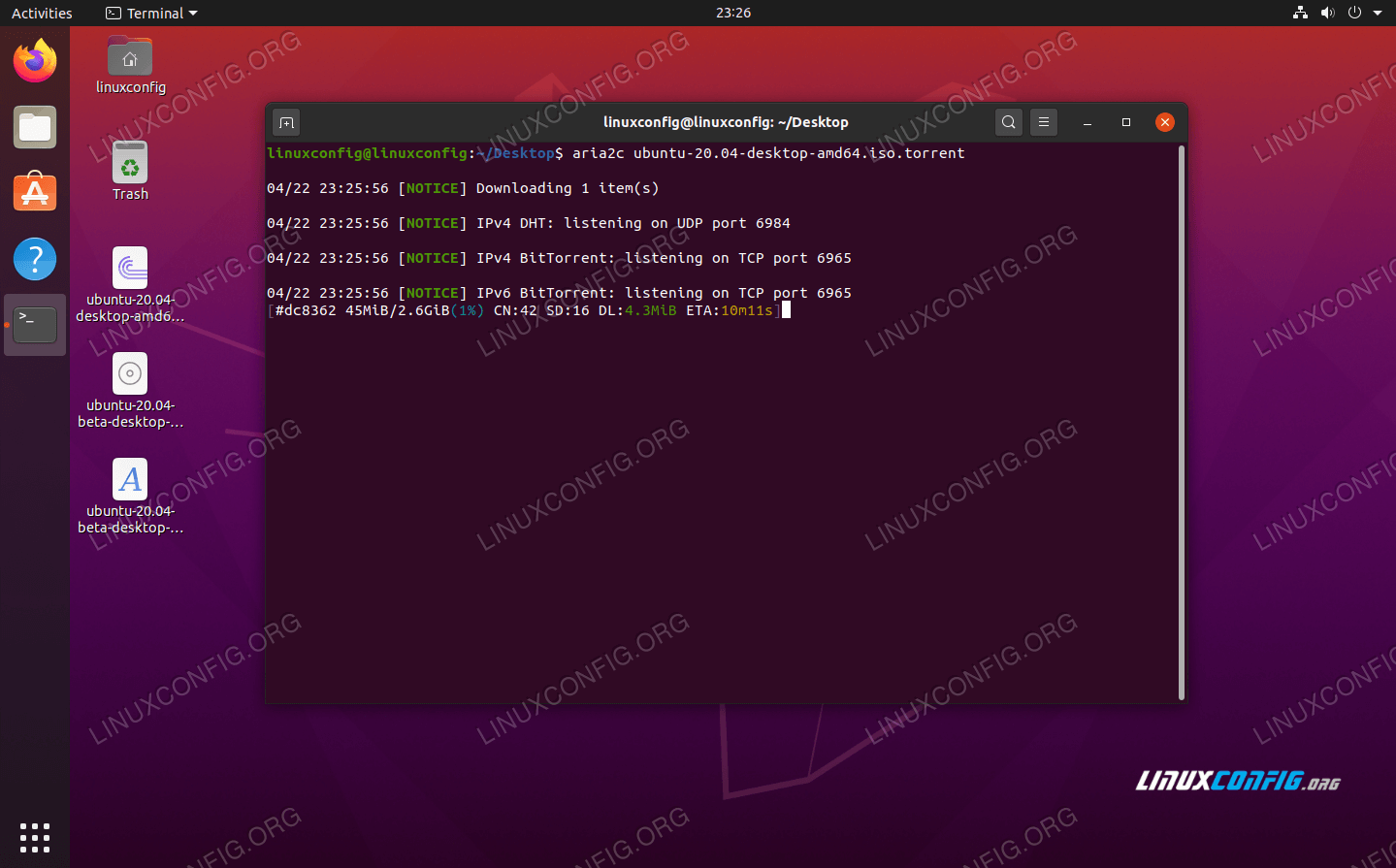 The terminal output from Aria2 is delightfully simple and straight forward, as you can see above.

Transmission-CLI is the command line version of the Transmission-GTK client that we covered above in the GUI section. Like its GUI counterpart, it’s extremely easy to use. You can install it from the terminal with this command:

After it’s installed, open a torrent with the transmission-cli command and specify the torrent file in the command: 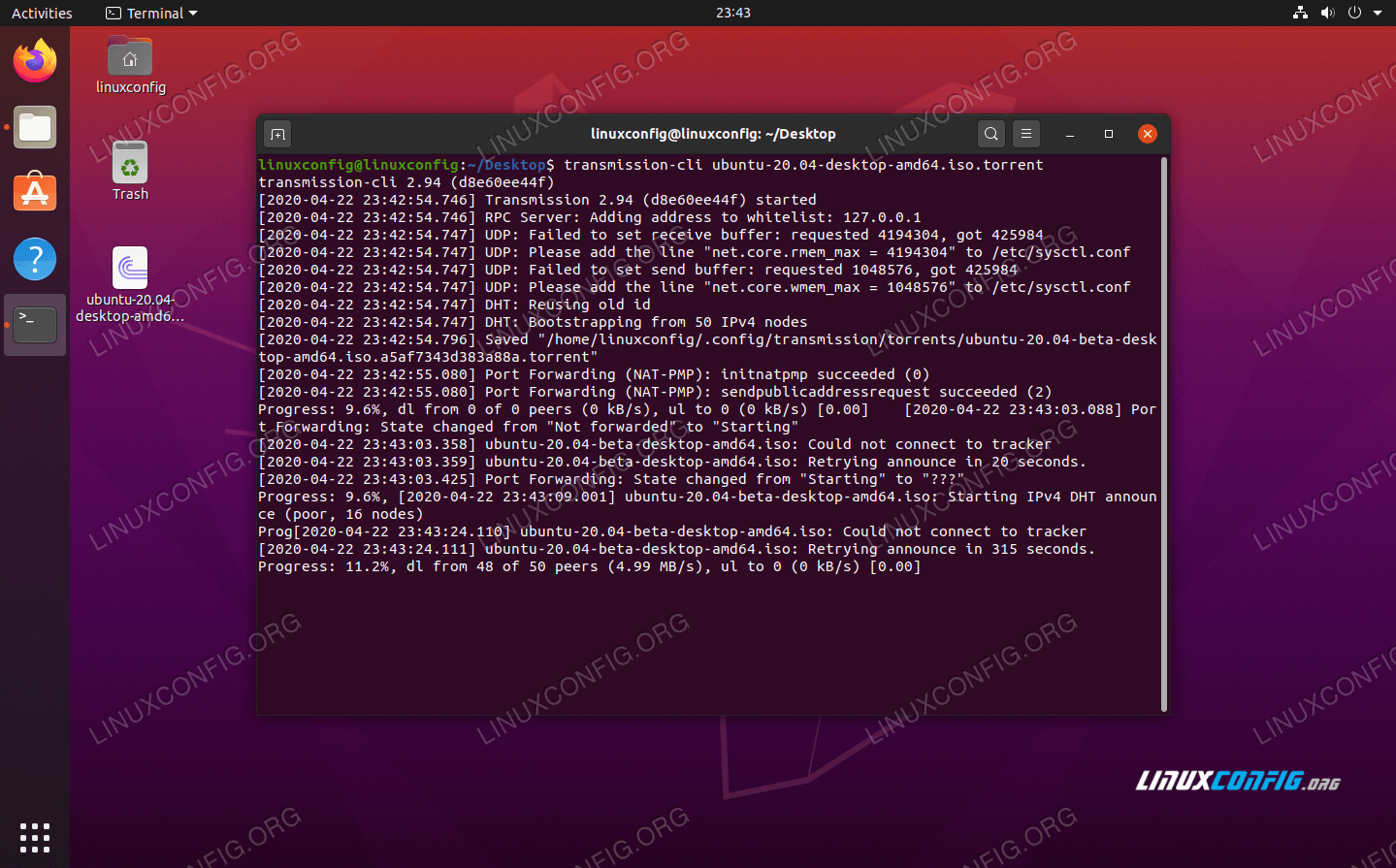 Transmission-CLI has some basic but very helpful options that can be seen with this command: 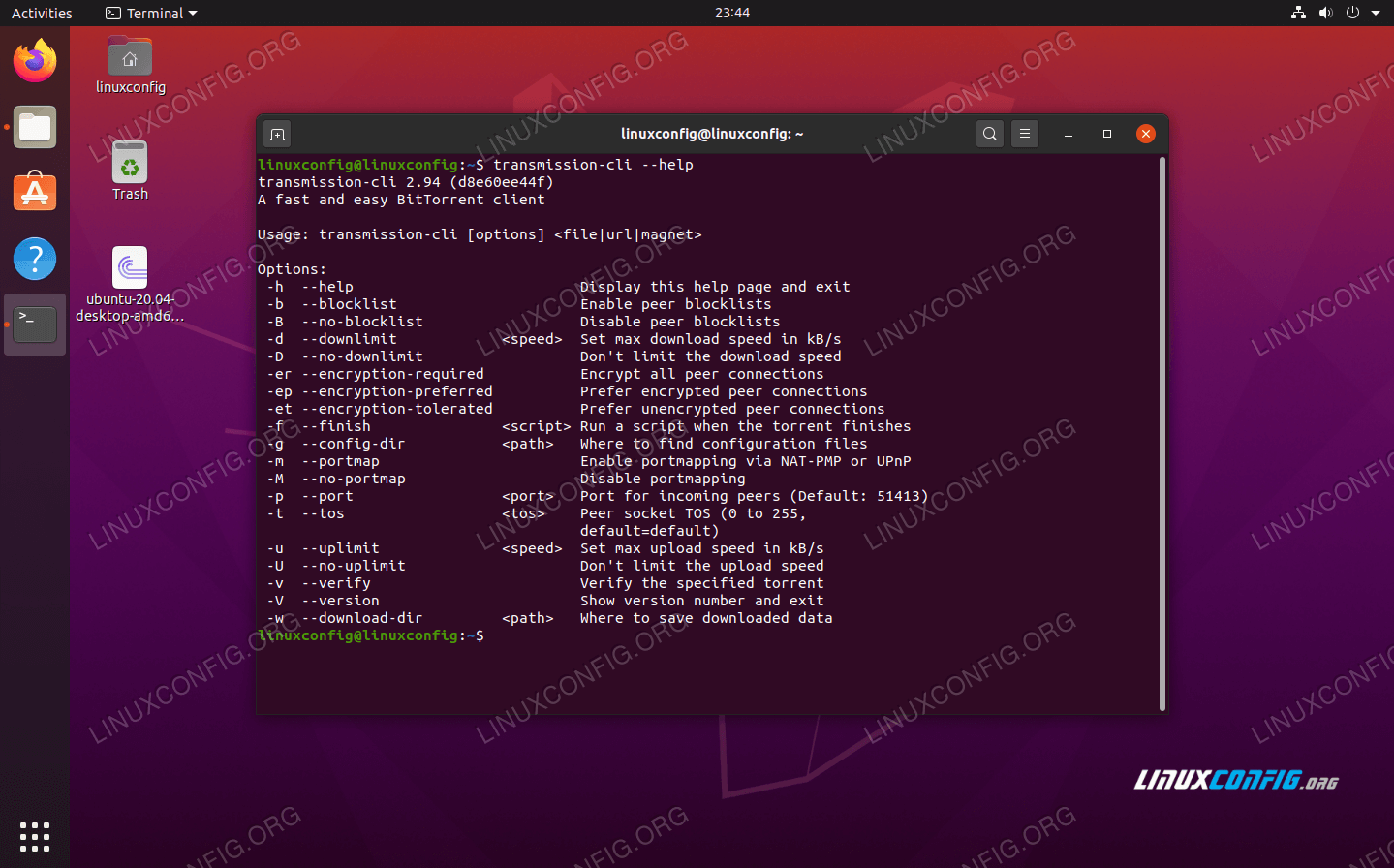 In this article, we went over the basics of multiple graphical and command line torrent client options for Ubuntu 20.04 Focal Fossa. Each of them have their pros and cons, and the best one for you will depend on your situation.

For users that download a lot of torrents on a regular basis, Deluge is a great GUI client and rTorrent is an excellent command line option. For casual use, Transmission will almost always suffice. But it really depends on you and your preferences. Hopefully this article has helped you make an informed decision about which one to use.