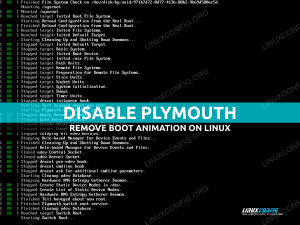 Plymouth is an application originally developed by Red Hat and later adopted basically by all the most commonly used Linux distributions. The software runs very early in the boot process, and provides eye-candy animations which accompany the user until he is prompted to login into the system. When Plymouth is used, boot messages are hidden, although they can be visualized simply by clicking the esc key. Some users, however, may prefer to visualize boot messages by default, and avoid any animation.