In the context of a discretionary access control (DAC) mechanism, the access to system resources, files and directories, is based on the identity of the users and on the groups they are member of. This type of access control is called “discretionary” because a user can perform its own policy decisions (limited by its own permissions, of course). In this tutorial we will see how to add a user to a group and what is the difference between a primary and a secondary group on a RHEL 8 / CentOS 8 Linux system. 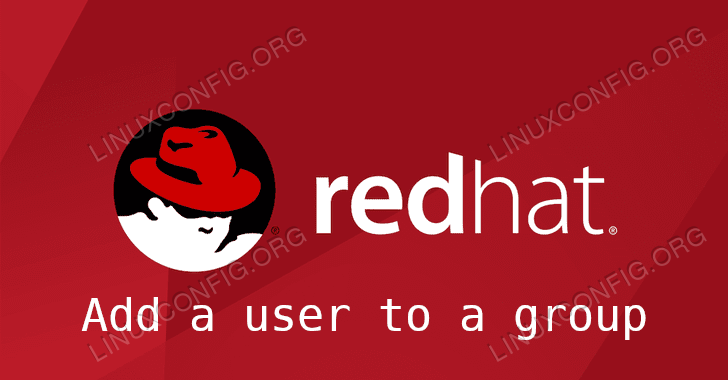 How to add a user to a group on Rhel8

What is a group?

Linux, being based on Unix, is a multi-user OS: multiple user does exist and share resources in the system at the same time. At the most simple level, access to this resources is managed by the use of a DAC (discretionary access control) model. The access to files and directories, for example, is based on a user’s identity and on the groups he is is a member of. In this tutorial we will see how to add an user to an existing group on a Red Hat Enterprise Linux 8 machine.

Nowadays, Red Hat, like almost all the other major linux distributions uses a scheme which is called UPG, or User Private Group: each time a new user is created, automatically a new group with the same name of the user is created too, and the user becomes its sole member. This is what is called a primary or private group.

Since, by default, each file or directory created by a user is created with that user’s primary group, this setup, while preserving security (a user can still modify only its own files), simplifies resources sharing and collaboration between users which are members of the same group when the setgid bit is used, by allowing write permissions for the group.

We can obtain a list of the groups a user is member of, by using the groups command:

As we can observe from the output of the command, the current user, egdoc, belongs to the egdoc group, which is its own primary group, and to the wheel group, which makes him able to run commands with sudo, and is what is called a secondary group: an optional group that is not associated with the user by default.

Add a user to a group by using usermod

While a user is the only member of its primary group, we may want to add a user to a secondary group, perhaps to grant him access to some kind of resources. Say for example we have a test user, and we want to add it to the existing group linuxconfig: the easiest and recommended way to accomplish this task is by using the usermod command:

Let’s examine the options we used. The usermod utility, let us modify a user account; by using it we can perform a vast range of operations, like changing a user’s home directory, setting an expiration date for its account or lock it immediately. The command let us also add the user to an existing group. The options we used in this case are -G (short for --groups) and -a, (which is the short form of --append).

The user “test” is now a member of the “linuxconfig” group. Let’s verify it:

Add user to a group directly

Using usermod is the easiest way to add a user to a group. For the sake of completeness, we now will examine another way of performing the same task by using the vigr linux command. This command let us edit the /etc/group and /etc/gshadow files directly, also locking them while they are open, to prevent their corruption and ensure consistency.

The “shadow” version of the file (/etc/gshadow) is modified only when the -s option is used. To add our “test” user to the “linuxconfig” group with this method, we should run the vigr command as superuser: the /etc/group file will be opened in the default editor (usually vi):

The syntax used to represent each group is the following:

The fields are separated by a colon: the first one is the group name, the second one is the “password” of the group (which is usually not set) and the third field is the GID or group-id. The last field is the comma separated list of the members of the group. To add our “test” user to the “linuxconfig” group, we should modify this field, so that the line becomes:

Once the change is performed, we can save and close the file. A message will appear on the terminal:

Since we changed the /etc/group file, the message suggests us to change also the related shadow file, which is /etc/gshadow. For those of you who don’t know, a shadow file, is used to store the encrypted version of information that would not be safe to store in plaintext form. For example, as we saw before, an x is reported in the /etc/group file, in place of the optional group password; the hashed version of the password, if existent, would be stored in the shadow-file.

Now, lets make the same change we did before, to the /etc/gshadow file, so that it gets in sync with /etc/group. All we have to do, is to provide the -s flag to the vigr command:

Once the file is opened, we make the needed change:

After that, we must force the writing of this file, since it is read-only: when using vi, we can do this by running the w! command.

An alternative way to keep the two files in sync, is to use the grpconv command, which creates the /etc/gshadow file from /etc/group, and optionally from an already existing /etc/gshadow file:

At this point, we can verify the consistency between the two files by running:

No output should be displayed at this point.

In this tutorial we saw the difference between a primary and a secondary group and what are their roles in a DAC model. We saw how can we add a user to a group either by using the usermod command, which is the recommended way, or directly by using the vigr command securely editing the /etc/group and /etc/gshadow files. Whatever procedure you decide to use to perform this administrative task, you should always pay the maximum attention.