Puppy Linux specializes in being a super lightweight desktop distribution with user friendly features. The entire operating system only weighs in at about 300 MB and its system requirements are incredibly small.

It’s a great distro for restoring an old computer or providing a simple interface to casual PC users. For other most popular Linux distributions please visit our dedicated linux download page.

Puppy is simple and straight forward, similar to Ubuntu and Linux Mint in this regard. However, it comes with far fewer packages and leaves a much smaller footprint. Other distributions feel bloated when contrasted with Puppy.

Puppy Linux is more accurately defined as a collection of distributions. There are multiple “puppies” available for download, including versions based on Slackware, Ubuntu, and Raspbian. That’s what has been officially released, but there are a slew of community “remasters” available as well, called “puplets”. As you can see, Puppy likes to coin a lot of their own terms. 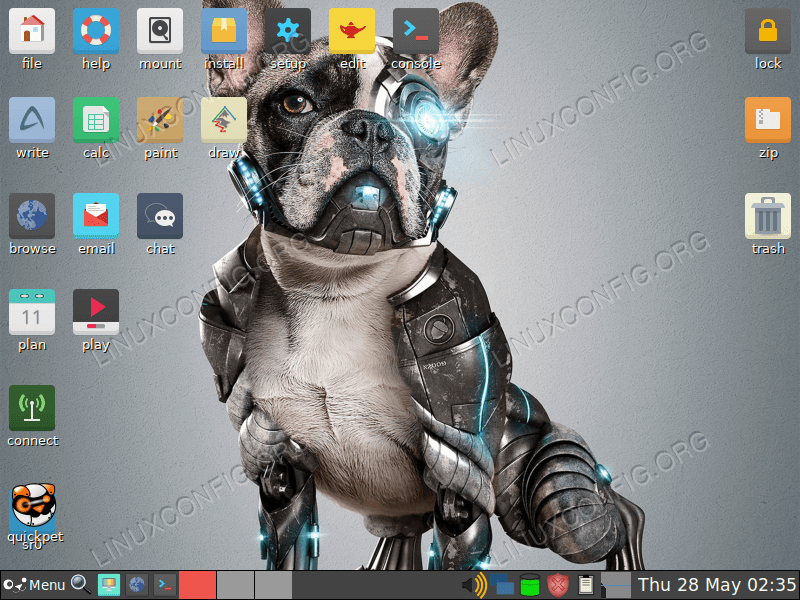 Developers use the “Woof-CE” tool to strip down official distributions and add their own dose of simplicity and user friendliness. All of this is then bundled up and released as a “puppy”. That’s the gist of it, but you can find the full details on the Puppy Linux website.

A common use of Puppy Linux is for USB rescue sticks. If you troubleshoot PC issues often, it’s easy to stick a USB drive into a computer and boot directly into Puppy in only a few seconds so you can perform troubleshooting. The entire installation fits into about 600 MB of RAM. You don’t need to install Puppy to a hard disk (although you certainly can).

The official Puppy Linux ISO images are available on Puppy’s download page. As discussed earlier, there are many community headed “puplets” available, but those are scattered across the net on their own pages. A list of most of those pages has been compiled in this wiki page.

Puppy’s diverse collection of distributions is vast. There seems to be one made for any possible need. This is great but can also be a little confusing. If you don’t know which to choose, stick to the latest one based on Ubuntu.

It’s hard to speak for Puppy as a whole, since it comprises so many differently tailored operating systems. In general, Puppy is extremely lightweight, great at running on old hardware, ideal as a USB rescue disk, and supplies a quick and simple interface for users that don’t want to deal with complexity.