Install and play Hearthstone with Lutris.

This will work on most current distributions but focuses on Ubuntu.

This little card game has been ported to nearly every platform imaginable, including mobile devices. However, Linux is not on that extensive list. That’s where Lutris and Wine come in.

Before you can get started with Hearthstone, you’ll need to install Lutris. Don’t worry about installing Wine separately. Lutris will take care of that. You will need the latest graphics drivers for your GPU, though. Make sure you have them installed and up-to-date before you go any further.

If you’re on Ubuntu, we already have a guide for installing Lutris and getting it set up on your system. Follow the guide, and jump back over here, when you’re ready.

If you’re on another distro, you can absolutely still install Lutris, but the process won’t be covered here.

Open up your browser and navigate to the Lutris Hearthstone page. Sign in to your Lutris account, if you haven’t already. 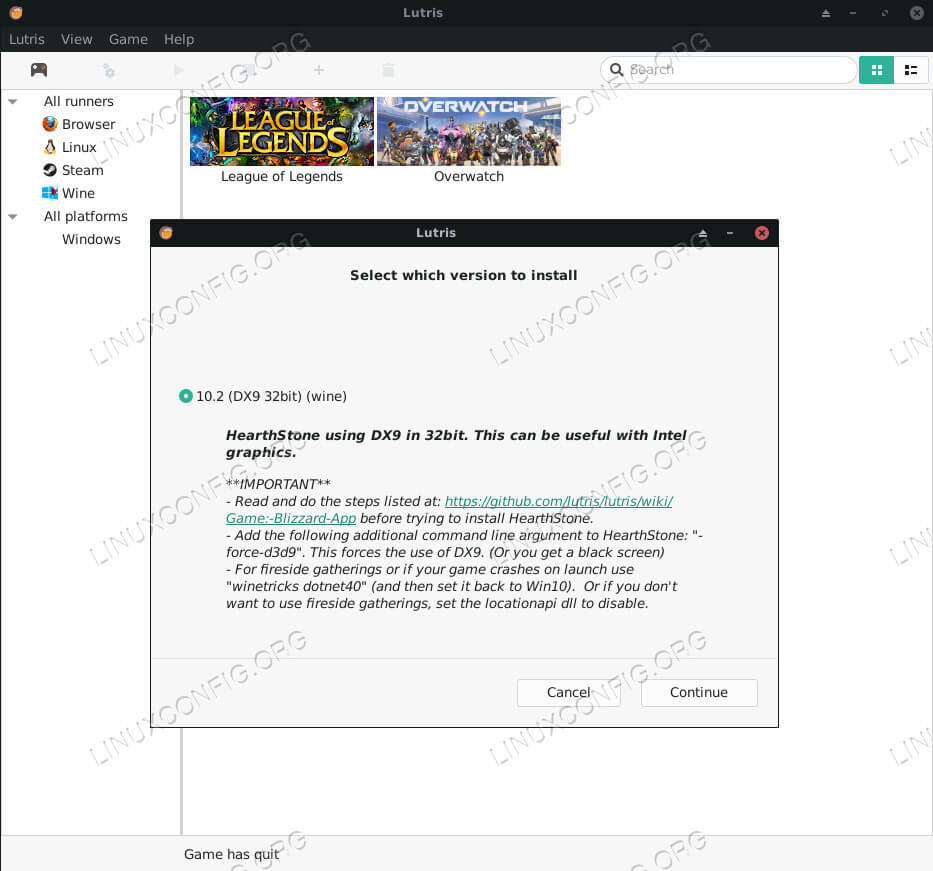 Lutris will open up automatically, or your browser will ask you to open it. When the Lutris window pops up, it’ll ask you if you want to continue with the install. Click the “Continue” button.

Next, Lutris will ask you where you want to set up the Wine prefix to install Hearthstone. Choose whatever is convenient for you, and begin the install process. 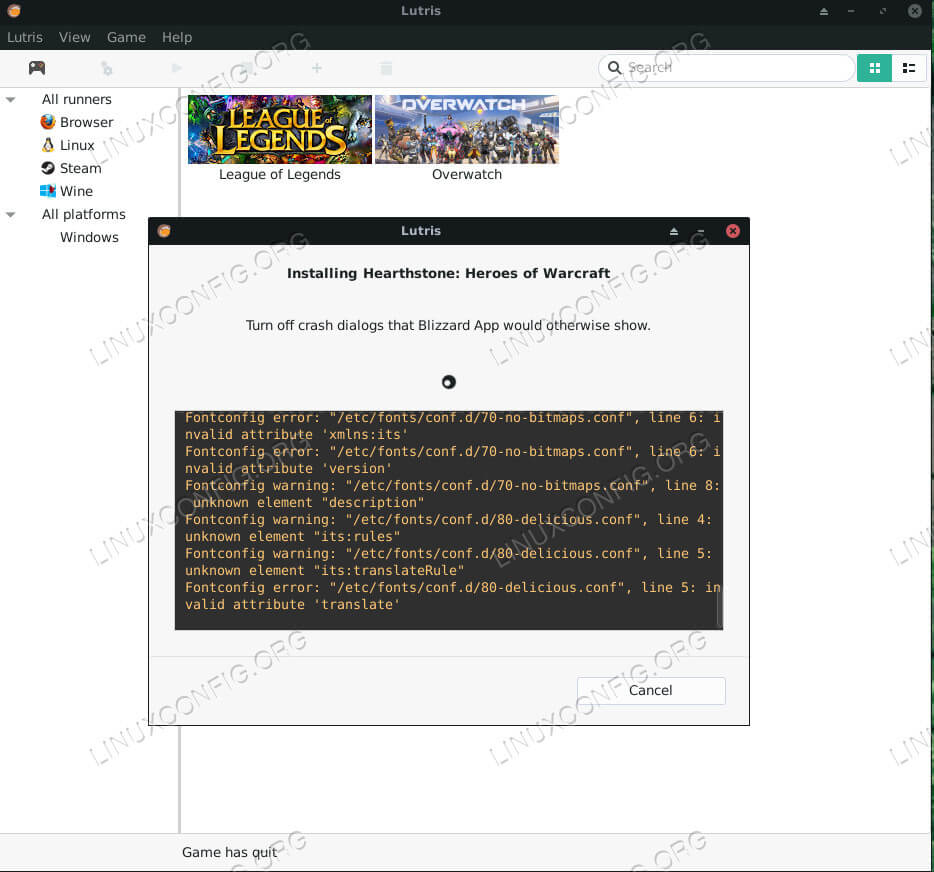 Lutris will begin downloading the necessary pieces to get Hearthstone working. When it has them, it’ll start configuring the Wine prefix to run Hearthstone as smoothly as possible.

Lutris will finish and clean up the installation. When it’s done, it will ask you if you want to create an application menu shortcut. Confirm. Close Lutris, and don’t launch the game just yet. You need to update Wine. Click on the “Runners” icon on the Lutris menu. It’s the second one from the left. Click on it, and a new window will open up that lists all of the available game launchers. Scroll to Wine at the bottom. Click on “Manage Versions.” 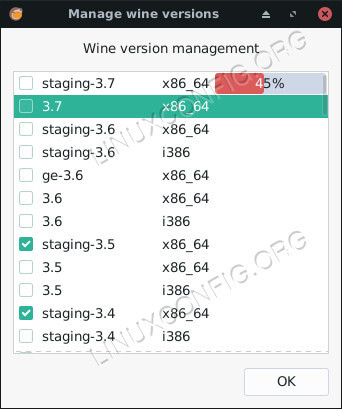 A new window will open up, listing the available versions of Wine. Next to each, you’ll find a checkbox. Find the latest version of Wine Staging towards the top of the list, and check it. Lutris will begin downloading Wine. When it’s finished, back out of those windows to the main Lutris screen.

You’ll find a new Hearthstone banner image listed under your game library. Right click on it, and select “Configure.” That will bring up a configuration window. Click the “Runner options” tab at the top. 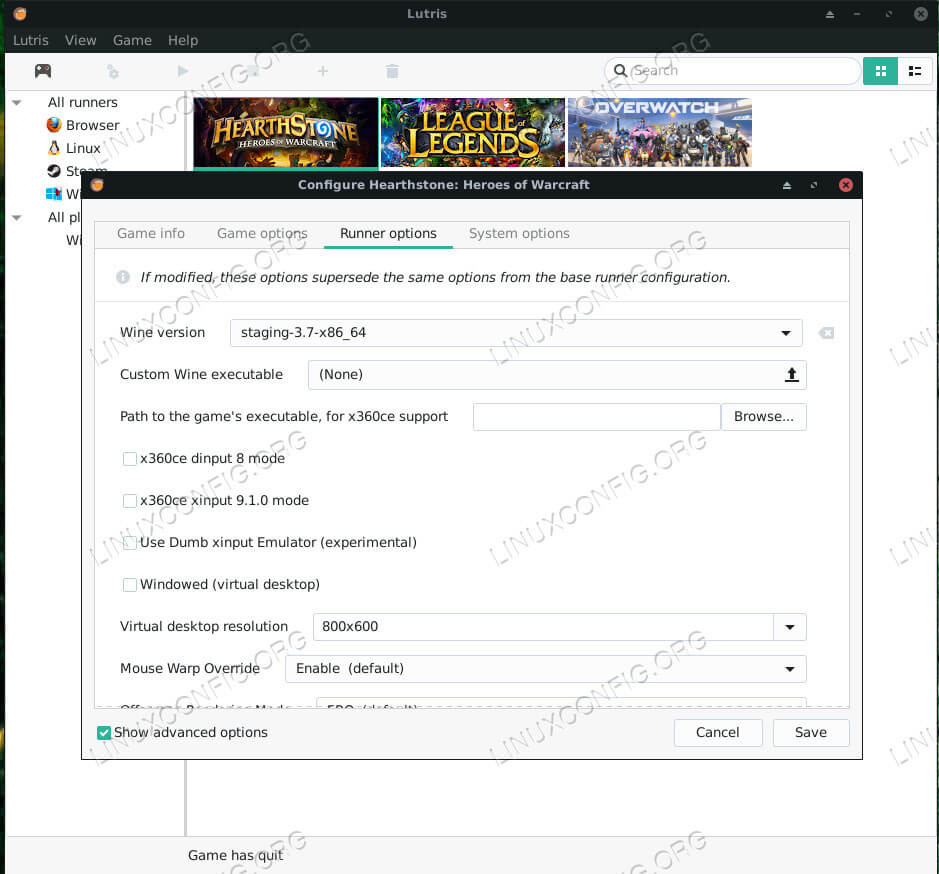 Near the top of the window, you’ll see a dropdown menu that lets you select your Wine version. Select the new one that you just installed, and save.

Click on the Heartstone banner image to launch it. After a few seconds, you’ll be greeted by the Battle.net login window. Sign in to your account. 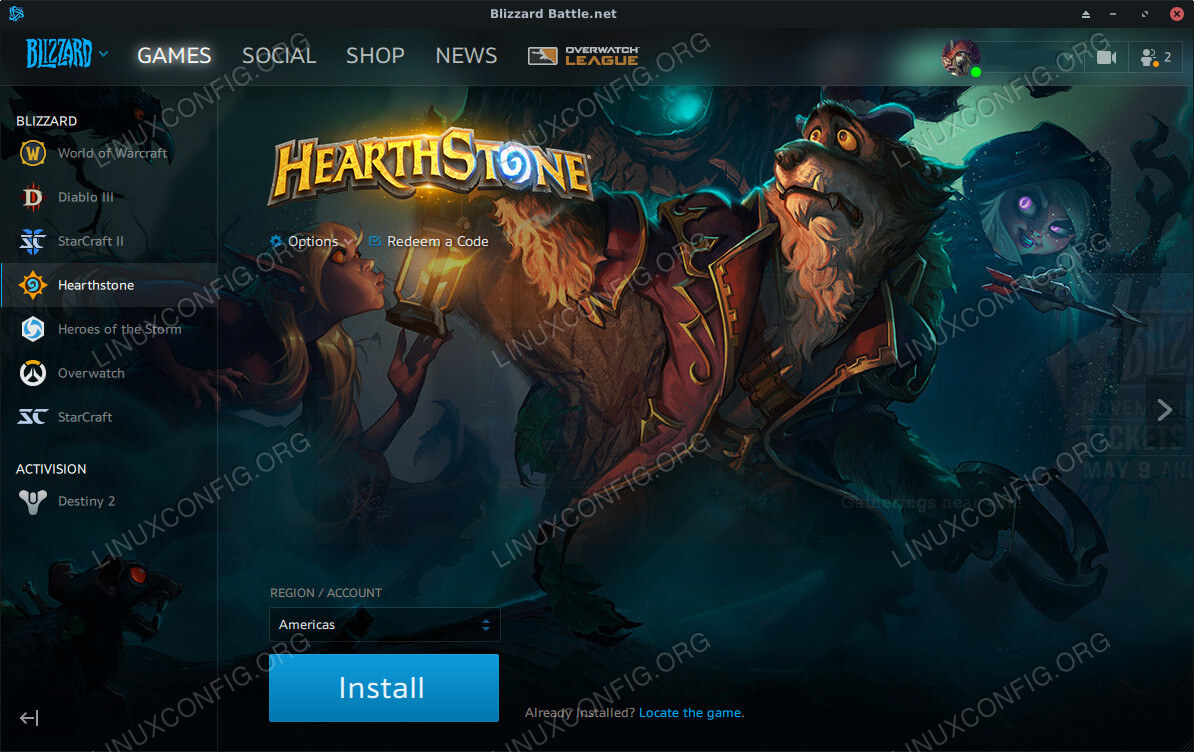 Next, the full Battle.net Launcher will open up. Click on the Hearthstone tab, and you’ll notice that the game isn’t installed. Lutris can only go so far. It set up the Wine prefix to be able to run Heartstone, and it installed Battle.net for you, but you need to install Hearthstone itself the old fashioned way. Click the button to install. 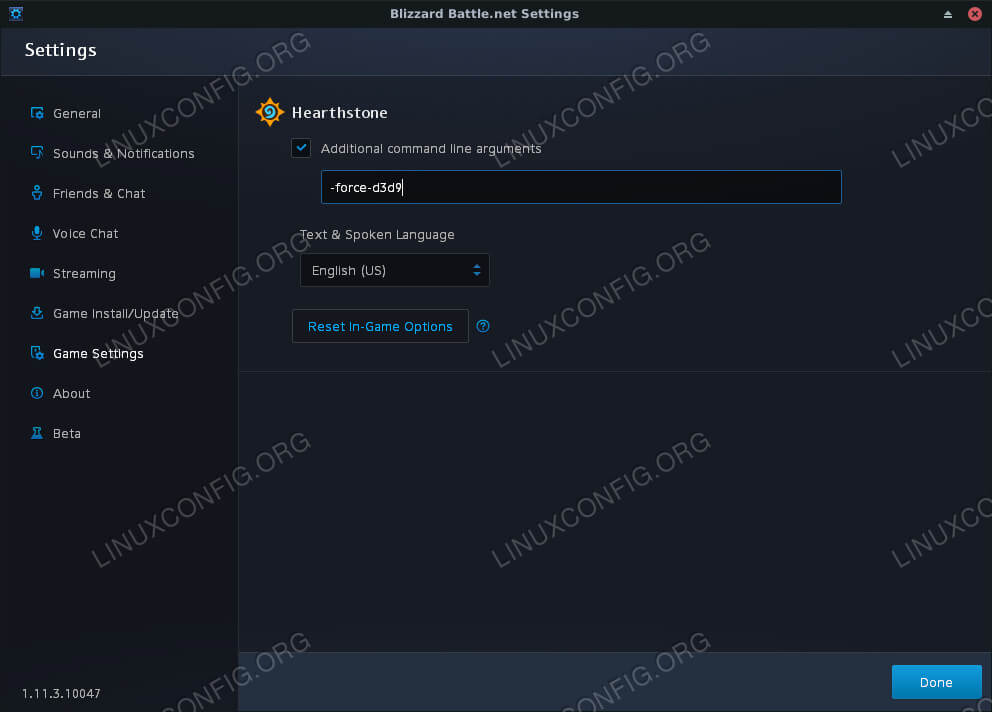 Click on “Game Options” next to the cog icon on the Hearthstone screen. A dropdown menu will appear. Click “Game Settings.” Check the “Additional command line arguments” box to display the command field. Type -force-d3d9 into the field. Click “Done.” 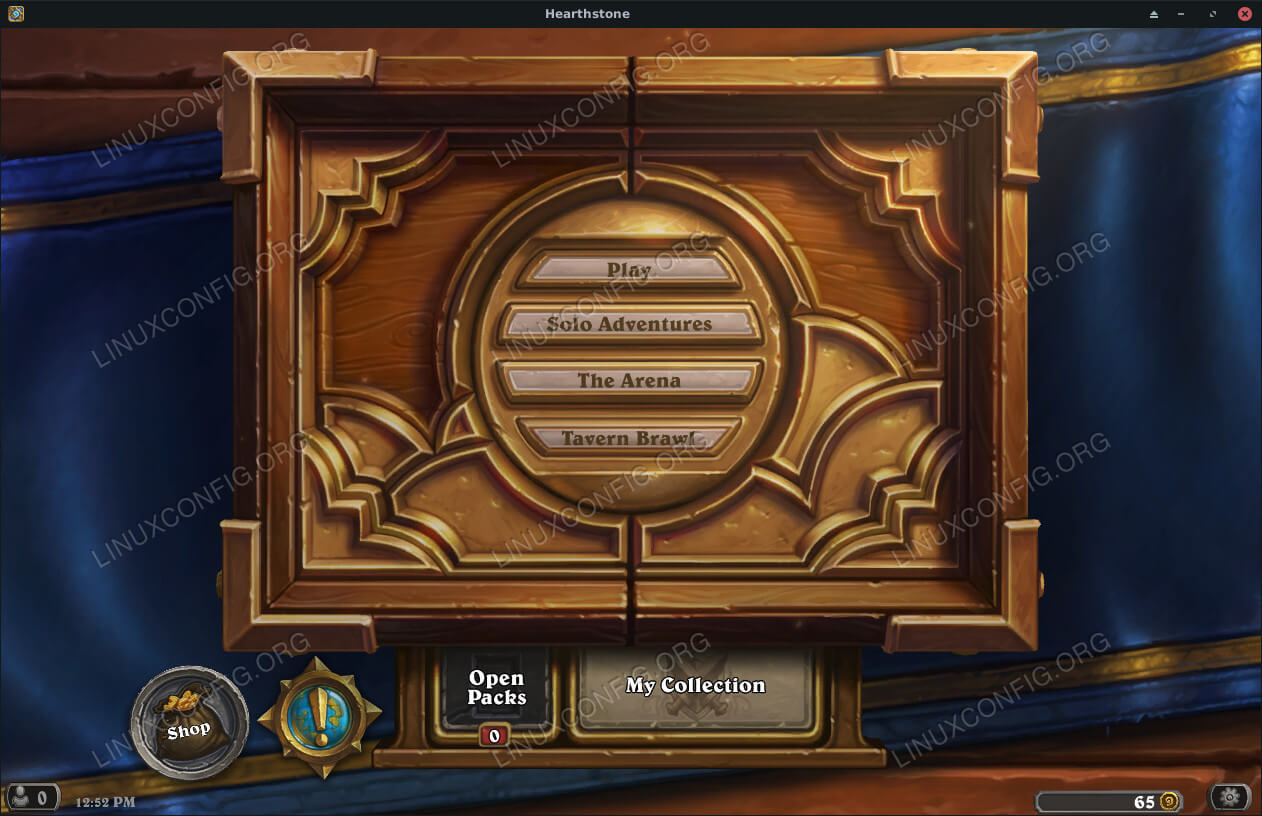 From now on, you can play Heartone by clicking on the banner image in Lutris or with the application menu launcher that you created earlier. In both cases, they’ll just bring up the Battle.net install from your Hearthstone Wine prefix.

You now have a working install of Hearthstone on your Linux PC! Keep an eye out for updates from Lutris, Wine, and Blizzard. Updates may break things, so staying on top of things is important. You can keep your Wine version updated by following the same procedure as before.