Parrot OS is a Linux distribution with a heavy focus on user privacy and penetration testing. It’s based on Debian Linux. For other most popular Linux distributions, please visit our dedicated Linux download page.

When people think of penetration testing distributions, usually Kali Linux is the first one that comes to mind. While there’s definitely some functional overlap, the two distributions have a lot of differences. First impressions of Parrot make it clear that it’s more of a privacy-focused distro than a hacking one.

Parrot inherits a lot of Debian’s traits, like using the APT package manager, from which it can install a staggering number of packages that are available in Debian’s repos. Parrot also maintains their own repos full of penetration testing and privacy tools.

Parrot makes a point of “staying quiet” by disabling network services by default. This creates a smaller RAM footprint but also helps keep the system hidden if you’re on a target network. It also disables auto mounting by default. These extra security measures are nice, but may be frustrating for a novice that wants their system to “just work.”

Parrot’s passion for privacy becomes immediately apparent when browsing through the default applications that are included with the distro. You’ll find the Tor browser already installed, and various Firefox privacy plugins like uBlock Origin, Privacy Badger, and HTTPS Everywhere. It’s nice having a distro that works so hard to protect your privacy. This can make it very attractive as a daily driver for some users. You don’t need to be a cybersecurity professional or penetration tester to use this distribution, though it can definitely fill those purposes well. 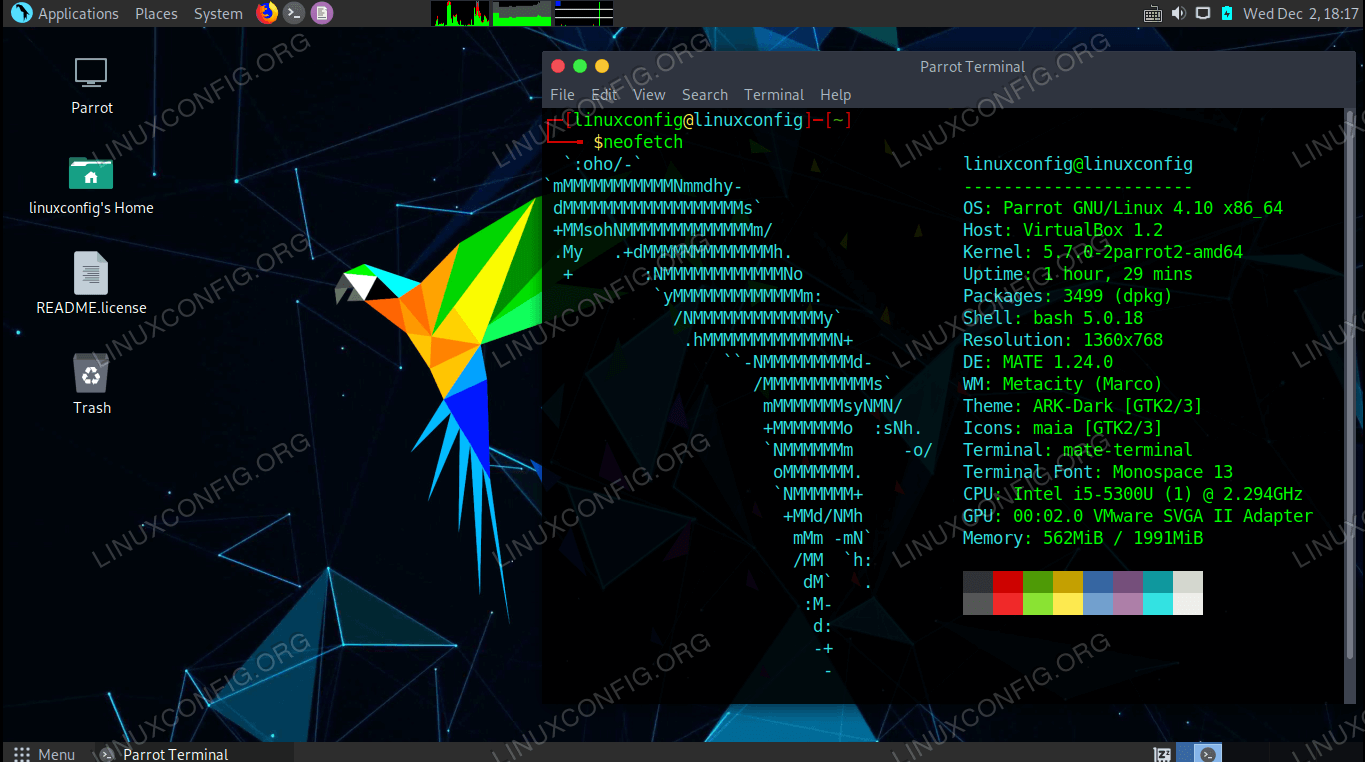 Parrot OS has a rolling release schedule, meaning you don’t need to worry about downloading any new releases. Just run the update/upgrade commands with your package manager and your distro will always have the latest packages, including the security testing software.

Parrot has a few different editions you can download. The first decision you’ll have to make is whether you want “Parrot Home” or “Parrot Security.” The Home edition doesn’t have any of the hacking tools installed out of the box, but you’ll still get all the privacy features. The Security edition comes with all the penetration testing tools, nicely organized and accessible in the applications menu.

Next, you need to decide which desktop environment you’d like to use. Parrot has ISOs for MATE and KDE. MATE is their flagship download, and from personal experience, I can tell you that the dark theme and clean menus (Parrot’s default look with MATE) are very aesthetically pleasing.

Head over to Parrot’s official download page when you’re ready to grab a copy of this free operating system. There are only 64 bit versions available, and the system requirements for running Parrot are quite low.

Parrot OS has made a name for itself by being a penetration testing distro. Not only that, but one that can go toe to toe with Kali Linux and still be used as an everyday operating system. Even if you’re new to ethical hacking, Parrot’s welcoming feel, snazzy themes, and snappy responsiveness makes it a joy to learn with. It’s a safe recommendation for users concerned with privacy, development, and/or penetration testing.