Arch Linux and Manjaro are two popular linux distributions, or distros, that have been getting more attention and gaining more users over the years. Although the two distros have a lot in common (in fact, Manjaro is an Arch Linux derivative), there are still many differences. These differences stem from each project’s philosophical approach, goals, and target audience. This results in pros and cons to using each. This article will help you learn about the similarities and differences between the two, and help you decide which one to use if you are not sure. 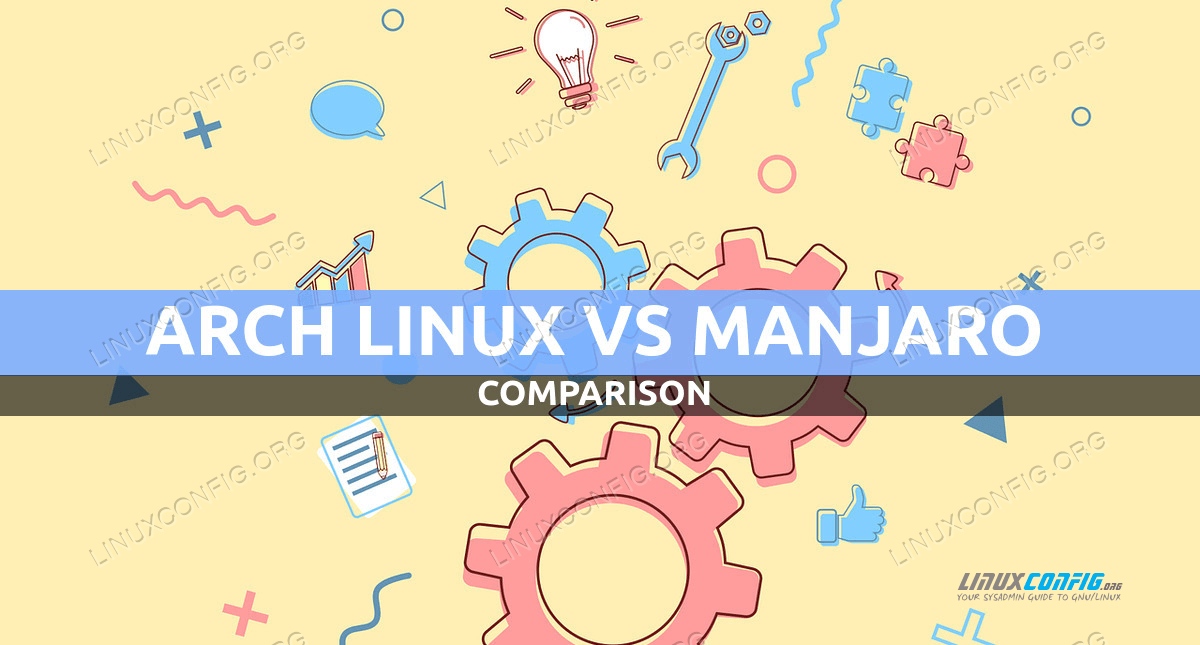 Arch Linux focuses on minimalism, customization and bleeding edge software. Due to these areas of focus, the installation process differs from most other Gnu/Linux distributions. Rather than utilize a GUI (Graphical User Interface) or TUI (Text User Interface) installer, the Arch installation process is completed entirely using the command line interface. Arch releases a single iso image
to use for installation. Once you boot from that image you are dropped immediately into a bare bones zsh shell.

Completing the Arch Linux install from this point will require you to refer to the ArchWiki Installation Guide. Following that guide will give you a basic minimal setup with a root user, no desktop environment and only standard GNU/Linux command line utilities installed on the system. The benefit to this approach is that you can proceed to install as much or as little additional software as you would like. This results in you having a fine-tuned customized system without any bloat.

If you don’t know where to proceed from this point, the ArchWiki is a great place to start with general recommendations on how to configure the system. It is also ripe with instructions on installing and configuring nearly any desktop environment, window manager or additional software imaginable. Most Arch users will at least proceed to create a standard user and configure the Arch package manager(pacman) repository mirrors. After that point, each user’s setup can get pretty specific and customized, and the steps you take depend on what you are looking to achieve. The ArchWiki is a pretty invaluable tool when installing and configuring Arch Linux. The Wiki is well respected and often referenced even by users of other distributions. 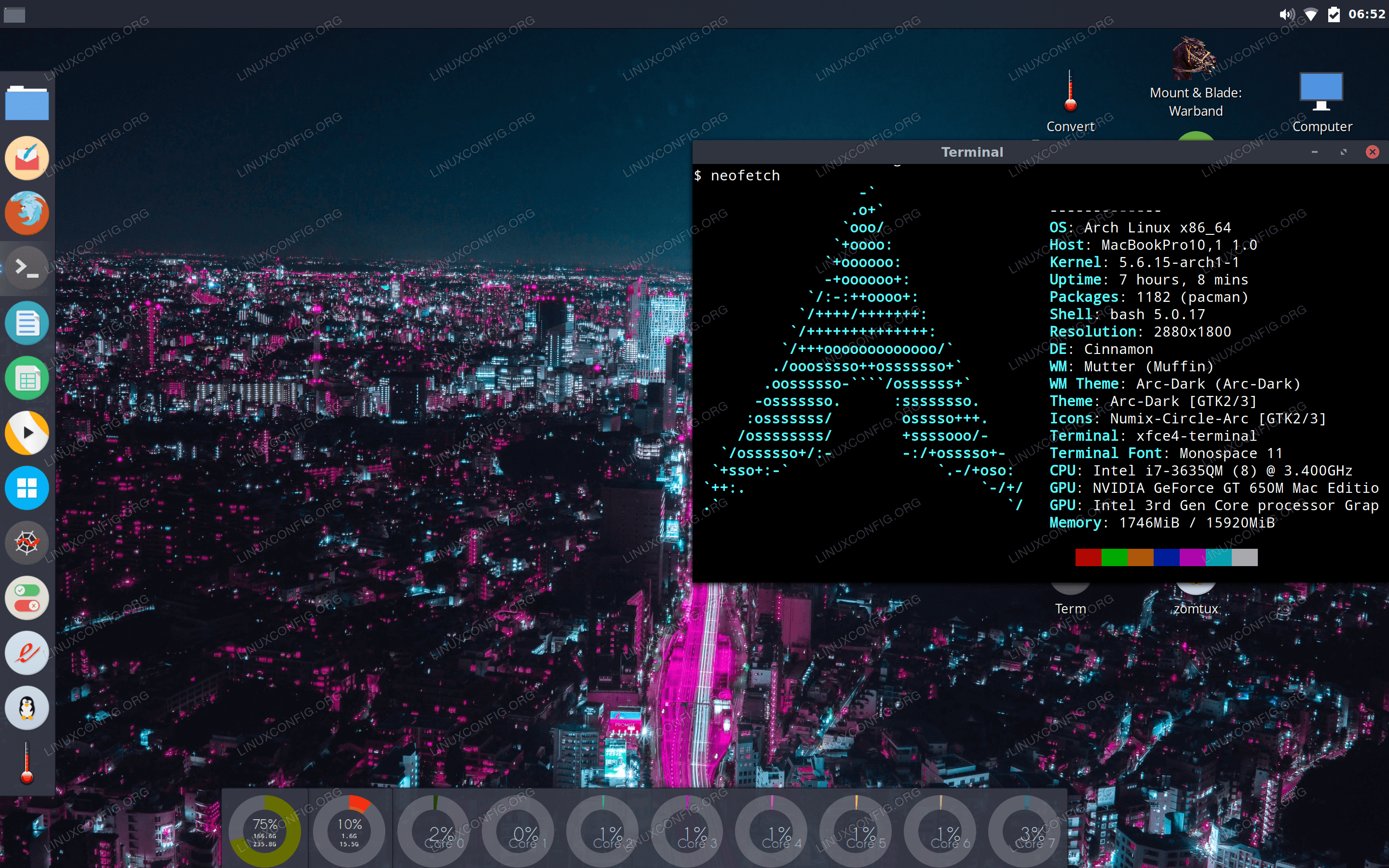 Arch Linux utilizes a rolling release model, which means you can install Arch once and keep your system up to date with the pacman package manager. Just issue the command “# pacman -Syu” and you will always have the latest “version” of Arch without ever having to worry about upgrading to a new release version. The official Arch repositories contain an extensive amount of packages and will have most of the software that you want to install. Arch package maintainers constantly upgrade the packages in the official repositories when new versions become available from upstream developers, so you always have the latest bleeding edge software. A benefit to this approach is that you get all the latest features and enhancements, but a risk is that you may also have to deal with the latest bugs.

If you need any software that isn’t in the official repositories then chances are you will be able to find it in the Arch User Repository (AUR). The AUR consists of PKGBUILDS uploaded by Arch users, some of which go on to enter the official repositories if they become popular. The AUR is one of the most appealing parts of Arch Linux since it drastically increases the availability of software to install. Although the AUR requires users to download PKGBUILDS from the site and manually build them, there are many third party AUR helpers available for download which can automate the process of searching for, downloading, installing and upgrading AUR packages. Some of these AUR helpers are even able wrap around pacman, so you can easily manage all of your official packages and AUR packages with one command if you would like to. Due to the extent of customization and the diversity of configuration possibilities there is no official “Arch look” or theme. Here is a screenshot of my Arch setup.

Manjaro is based on Arch Linux. As a result, it inherits a lot of the features of Arch Linux, but it implements many unique features as well. It also uses a rolling release update model; however, Manjaro maintains its own official repositories. The Manjaro package maintainers prefer to wait until software is considered more stable before updating those packages in the repositories. Since the software is more stable compared to the bleeding edge software in Arch repos, Manjaro users are less likely to encounter bugs that require them to have to troubleshoot issues, but they also have to wait just a little bit longer to receive new features.

Like Arch, Manjaro uses pacman as its package manager, however it also comes with a GUI frontend to pacman called Pamac. In general, Manjaro tends to include GUI system management tools by default whereas Arch provides commandline ones by default.

Manjaro focuses on being user friendly. It utilizes a straight forward graphical installer that guides you through the install process with an ease that is similar to installing Ubuntu. Manjaro has multiple iso images available that you can download and use to install the operating system. Each one is considered a separate edition. Which one you should use depends on what Desktop Environment you want to have. The official Manjaro editions are based on XFCE, KDE, and GNOME Desktops. The unofficial community editions include Awesome, Bspwm, Budgie, Cinnamon, i3, LXDE, LXQt, MATE, and Openbox.

Out of the three official editions, none of them are necessarily considered the default, but XFCE is the first one listed on their download page and may be the only download that a new user notices is available. I have included a screenshot of what the XFCE edition looks like after a fresh install. Project developers have created a distinct Manjaro look and feel using themes for all of the editions. As you can see this Manjaro look is characterized by a dark theme with green highlights. This makes it easy to have an aesthetically pleasing setup without any customization necessary. 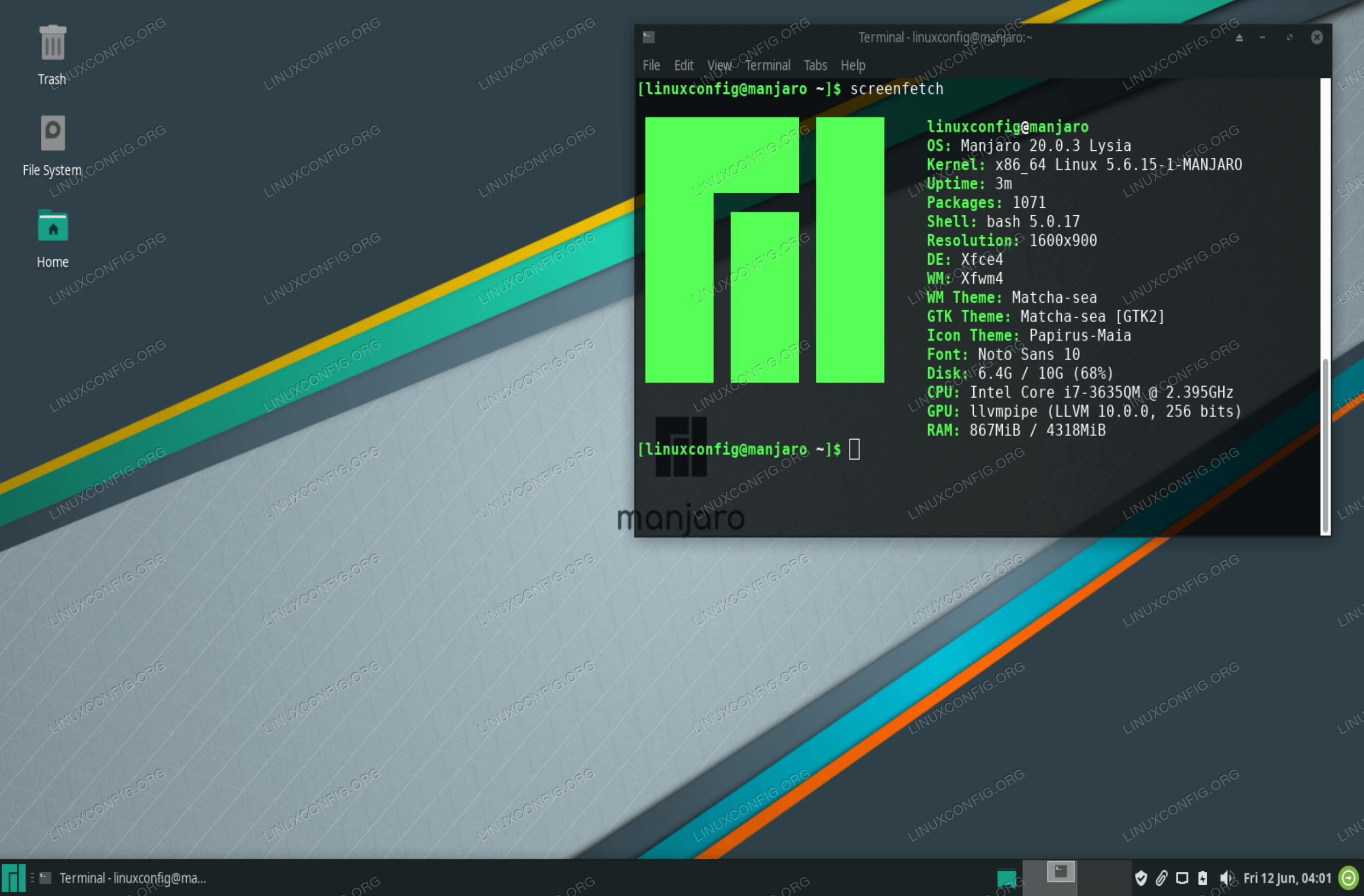 Because Manjaro is based on arch, it is also compatible with the Arch User Repository. In fact, you can even use the pamac GUI to install from the AUR once you have enabled the option in the pamac preferences pane. Manjaro does maintain its own ManjaroWiki similar to the ArchWiki, however unlike arch it is not necessary to consult the wiki in order to complete the initial install. In many instances the laudable ArchWiki may also be relevant to Manjaro users, but of course that is not always guaranteed for all topics.

Because Manjaro is based on Arch, they unsurprisingly have several key similarities. Both distributions follow a rolling release cycle, and have extensive repositories maintained by each distribution’s package maintainers, as well as access to the Arch User Repository (AUR) to install community maintained software. Both also have a number of Desktop Environments and Window Managers to choose from, and informative wikis that can be used as a resource.

Those similarities begin to diverge when you look at other characteristics. Arch is focused on minimalism and simplicity of design, whereas Manjaro is focused on user friendliness and ease of use. The Arch installation process and resultant base install is entirely centered around the command line interface; GUIs are optionally installed later. Additionally, after the Arch base install many additional manual steps are required before the user arrives at what most people would consider to be a “complete usable system”.

Unless you already have significant experience installing Arch, you will need to consult the ArchWiki to complete the installation process. On the other hand, Manjaro utilizes a GUI installer that makes installation as easy as installing Ubuntu. a Manjaro base install includes all the bells and whistles that are typically associated with Desktop Linux, such as a Desktop Environment, optional Office Suite, a PDF reader, an image viewer, a webrowser, a mailreader, Video/Audio players, etc; even Steam is included out of the box. Manjaro includes GUIs to simplify system configuration and package management, in contrast to the command line-driven approach of Arch.

The above differences may translate into some pros and cons for users of each distribution. The Arch philosophy, installation and configuration process targets advanced users of Linux who know exactly what they want on their systems and are very comfortable using a command-line interface. The Manjaro approach to these same matters targets new users and users who value convenience and ease/speed of setup over customization.

Manjaro takes great liberty in assuming what their users would want installed on the operating system. A potential benefit to this approach is that that the users have an experience where everything is ready to go without any additional effort and everything works right out of the box. A potential disadvantage to this approach is that it may result in a lot of “bloat” in the form of applications and utilities that you may not need and may never use.

Once installed, Manjaro’s intuitive GUIs make it easy for new users to administer their system right away without having to consult documentation, while more advanced users may choose to use the command-line interface to do so if they desire. To some users, these GUIs are an unnecessary abstraction that they will never use and if they are using a machine with low storage it doesn’t make sense to have them taking up disk space.

Conventional wisdom may indicate that users who are newer to GNU/Linux should install Manjaro, while more advanced users should install Arch, however it is not necessarily that straightforward. As discussed above, an advanced user short on time or whose main priority is convenience may elect to install Manjaro. Similarly, many newer users find installing Arch to be a valuable learning process and take pride in the custom system that they built for themselves from the ground up.

Both distributions excel at accomplishing their stated goals and in that regard they are both excellent choices. I recommend that you use whichever one appeals to you the most. If you have the time and desire you might as well try them both out. You may even discover that you prefer to use different distributions on different machines.