Nowadays hard drive manufactures are switching to a new hard drive technology which uses 4KB sectors size instead of conventional 512B. This new technology requires little tweaks to get a better performance in comparison to out-of-the-box settings. This article will describe some simple to follow instructions on how to partition the WD EARS hard-drive to get better overall performance. Getting the partitioning part done by aligning each partition can rapidly increase a hard drive’s performance.

512B sector size standard is here for over 30 years and therefore lots of the code written for a Linux OS has 512 number hard coded in its source.
The main idea in regards to the 4 096 B size sectors is to increase the bit density on each track by reducing the number of gaps which hold Sync/DAM and ECC ( Error Correction Code ) information between each data sectors. Therefore, for 8 x 512 B sectors the track also holds 8 sector gaps.

By having one single sector of size 4 096 B ( 8 x 512 B ) the track holds only 1 sector gap for each data sector thus reducing an overhead for a need to support multiple Sync/DAM and ECC blocks and at the same time increasing bit density.

Linux partitioning tools by default start each partition on sector 63 which leads to a bad performance of WD EARS hard-drives since they are not aligned to 4K sector from the beginning of the track.

For this article I’m using WDC WD10EARS-00Y5B1. This is a 1TB SATA hard-drive with 64MB cache memory. 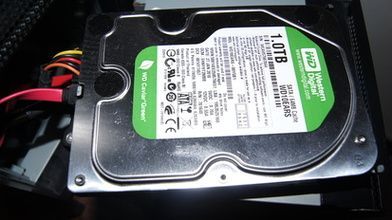 I bought this Hard Drive for personal use to expand my /home directory by mounting the entire single partition drive to /home . When following the statement on the hard drive’s label : “All other OS software configurations– drive is ready to use as is.” I rapidly decreased the efficiency of my system. That statement is only true if the following statement is also true: Give a Windows users software and do not bother with Linux guys as they will fix it them self’s. It also said that the drive is environmentally friendly ! Well, if transfering some data to WD EARS drive takes at minimum 3x longer then it normally would this hard drive is hardly environmental and therefore we should get partition alignment right.

Here are some performance statistics using dd command to transfer some arbitrary data to WD EARS hard-drive. Tests are performed using back | track live CD using following script. To increase an accuracy the script runs the dd command 10 x in the loop for each test.

It appears that ext3 file system is most crippled when disk’s partition is not aligned and starts on sector 63. This test may not be the most effective benchmark as there are many more variables to be filled into the formula, however it give us some picture of what is going on. I could see the difference even on greater scale when installing back | track Linux on WD EARS drive formatted with ext3 partition starting on sector 63 ( 34 minutes ) and 64 ( 8 minutes ).
NOTE:

Another test which can be performed is to use hdparm -Tt /dev/sda . However, this test disregards all partitioning and file systems as it will access a raw block device and the results are same whether you have partition starting with sector 63 or 64 or even with no partitions at all.

In fact you can start partition by any number x where x >= 64 and is ^2. Thus 64, 128, 256, … 2048 etc. For completeness I have also tested Advanced Format Hard Drive Utility for WindowsXP developed by Western Digital and this piece of software aligns a first partition to a 2048 sector. I will follow this suggestion for the rest of this guide.

If you decide to have multiple partitions on the WD EARS drive, the partitioning scheme is little bit more tricky. Here is an example of partitioning table produced by fdisk with all partitions aligned:

To test your partitions use ext3 filesystem as the writing speed difference between partitions which are not aligned is big enough to clearly see that something is not going right.

Changing Number of head and sectors

If you are not good in math you can use another approach to partitions your hard-rive. This will involve changing the default value of head and sectors per track. First is to use fdisk with following options:

Then create your partitions as per usual, however the drawback is that your first partition will not be aligned. Similar to Microsoft adopted scheme of:

Procedure for partitioning of WD EARS drive for Dual Boot with Windows XP is exactly the same as in previous section. I suggest using starting sector 2048 since this is the sector number generated by Advanced Format Hard Drive Utility for Windows XP.

Despite of first frustrations of not knowing what is going on with the performance of my system, the hard drive is great. It is very quited and do not produce much heat. The hard-drive has better performance then my other WD740ADFD–00NLR4 Western Digital 74GB 10000RPM SATA drive so I might end up using WD EARS drive for my multi Linux boot system 🙂

Before you consider to buy / use one of the Western Digital GreenPower drives you should be aware of their high Load_Cycle_Count value as a factory settings. What it meas that WD GREEN drive parks its head every 8 seconds which rapidly decreases its usability. WD support provides tool called RE2GP Idle Mode Update Utility short for “wdidle” to fix this problem. RE2GP Idle Mode Update

wdidle utility can be downloaded here:

READ MORE ABOUT THIS ISSUE HERE:

I’m sure that there are more tweaks or alternatives on how to increase a performance of WD EARS drive so please let me know and I will update this document. Thank you