Your Linux system may already have LVM installed, but it doesn’t come installed by default on every distro. Use the appropriate command below to install LVM with your system’s package manager.

To install LVM on Ubuntu, Debian, and Linux Mint:

To install LVM on CentOS, Fedora, AlmaLinux, and Red Hat:

To install LVM on Arch Linux and Manjaro:

The first thing we will do is create partitions on our disk. This is to facilitate the creation of physical volumes in the next section, which can either be created on raw, unpartitioned block devices or single partitions. For the sake of this tutorial, we will work on the latter.

For this example, the disk we’ll be working with is /dev/sdb, which is a 5GB (and currently unpartitioned) hard disk. Refer to the diagram at the beginning of this guide to visualize the configuration we’ll be setting up.

We can see our /dev/sdb disk and its pertinent details with the following command. 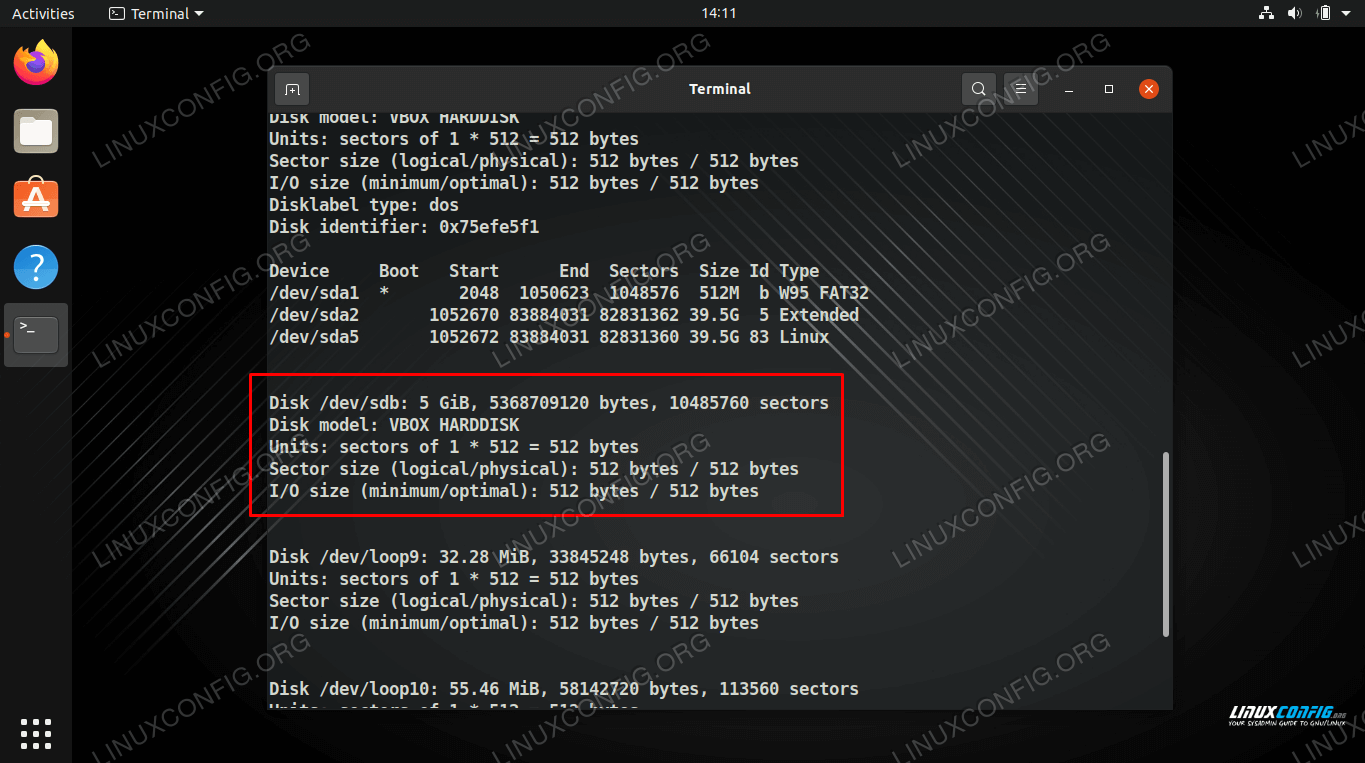 Next, let’s partition the disk with cfdisk.

An interface will open in your console, which is quite intuitive to use. We’ve created the following two per partitions, as per our diagram in the beginning. 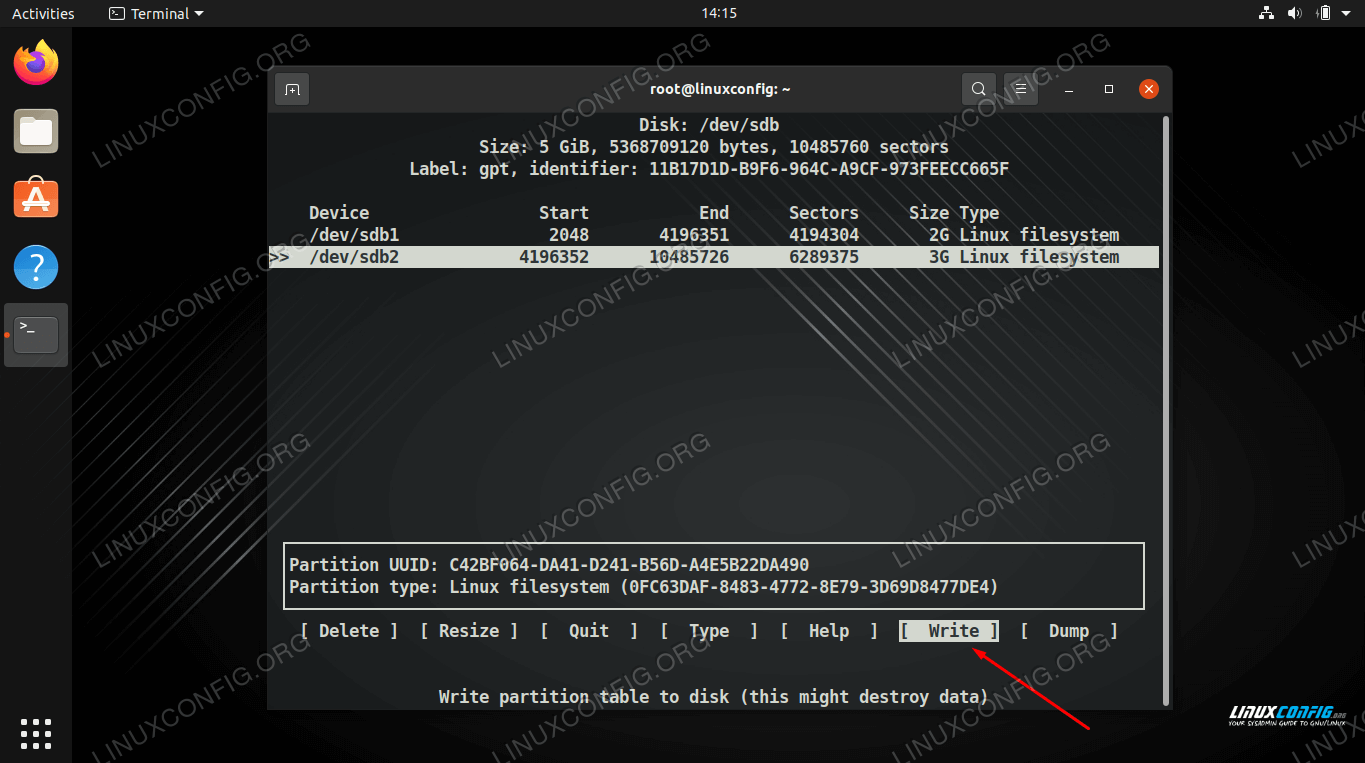 Write your changes to the disk to finalize the partition table

Finalize your changes by choosing “write,” then exit the utility when done. We can now see our partition listed when we execute fdisk -l again. 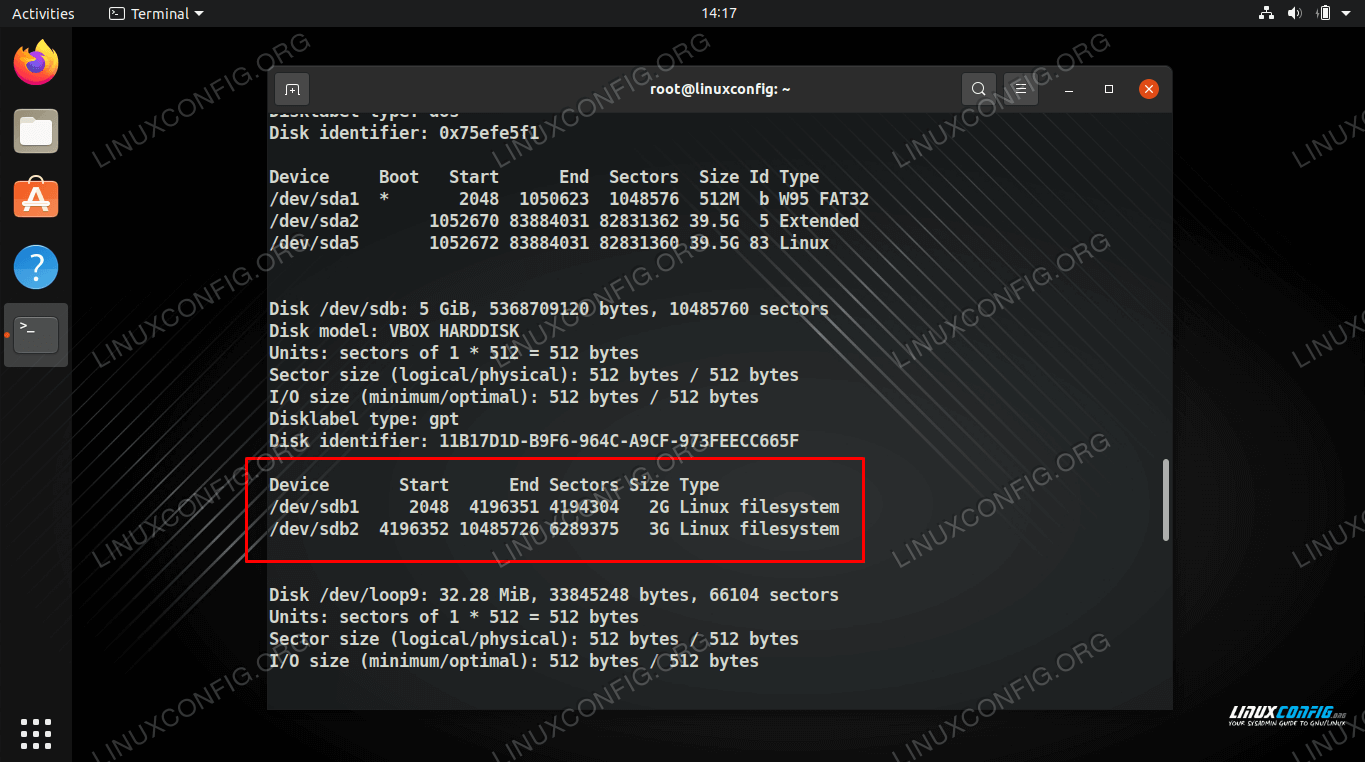 We can now create physical volumes on our new partitions by using the pvcreate command.

Use the pvdisplay command to see information about all the physical volumes on your system, or specify a particular volume you wish to view details about. 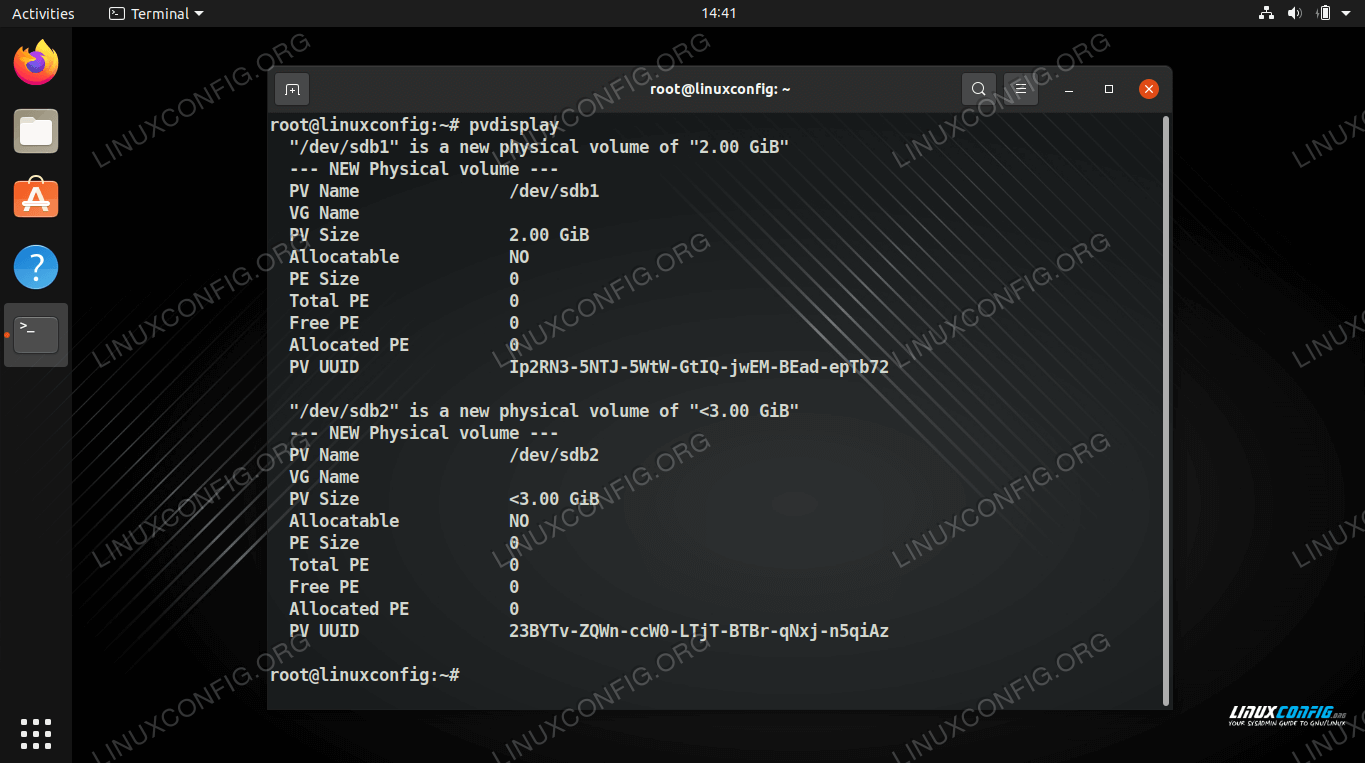 Use pvdisplay command to see a list of physical volumes

At this stage we need to create a virtual group which will serve as a container for our physical volumes. In this example, we’ll call our virtual group “mynew_vg” which will include the /dev/sdb1 partition, with the following Linux command:

Or, to include both partitions at once:

Use the following command to display information about the virtual group(s). 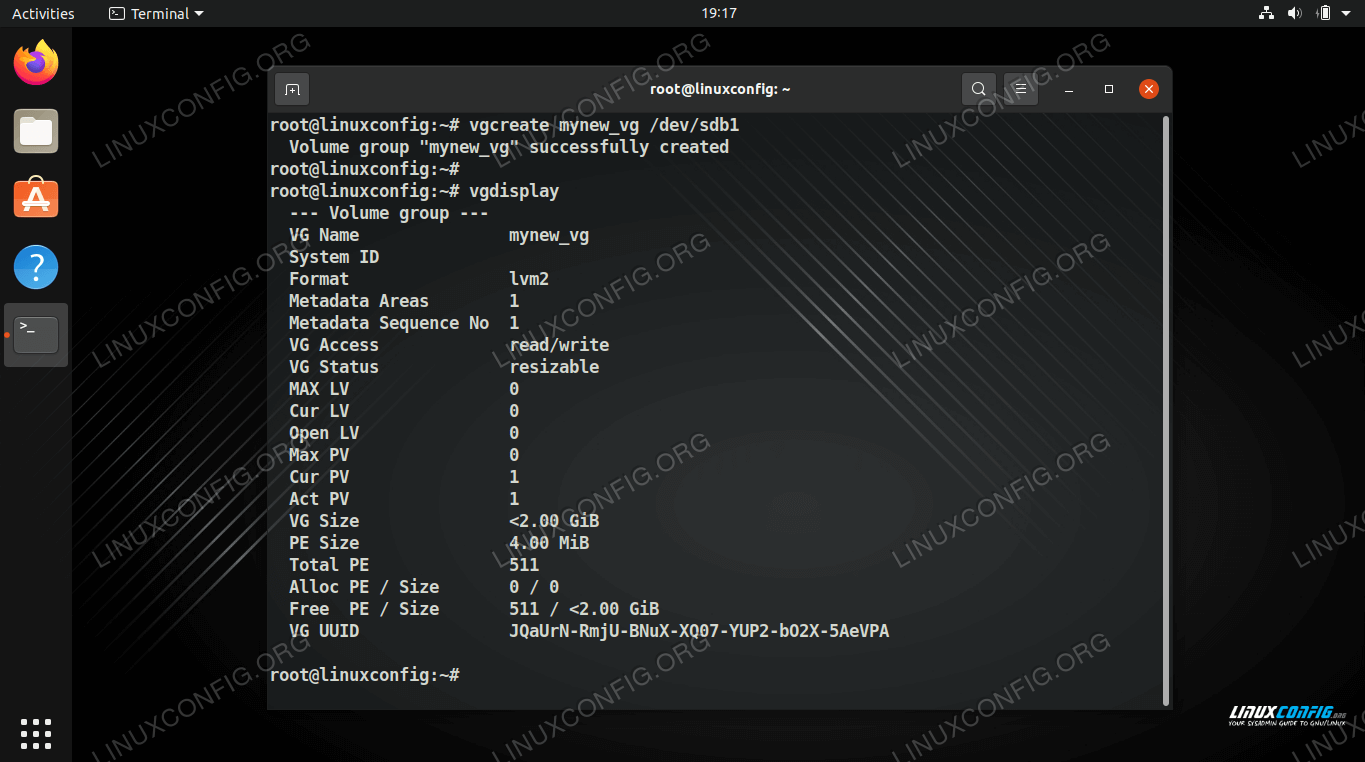 Creating a virtual group and then viewing its details

We can add more physical volumes to the group by using the vgextend command.

Now we can move on to creating logical volumes. It may help to think of our virtual group as a “big cake,” from which we can cut “pieces” (logical volumes) that will get treated as partitions on our Linux system.

The following command will create a logical volume named vol01 with a size of 400MB.

Then, we’ll create another volume named vol02 with a size of 1GB. Again, refer to the diagram above to help visualize the configuration.

Finally, we can use the lvdisplay command to see the logical volumes we’ve just created. 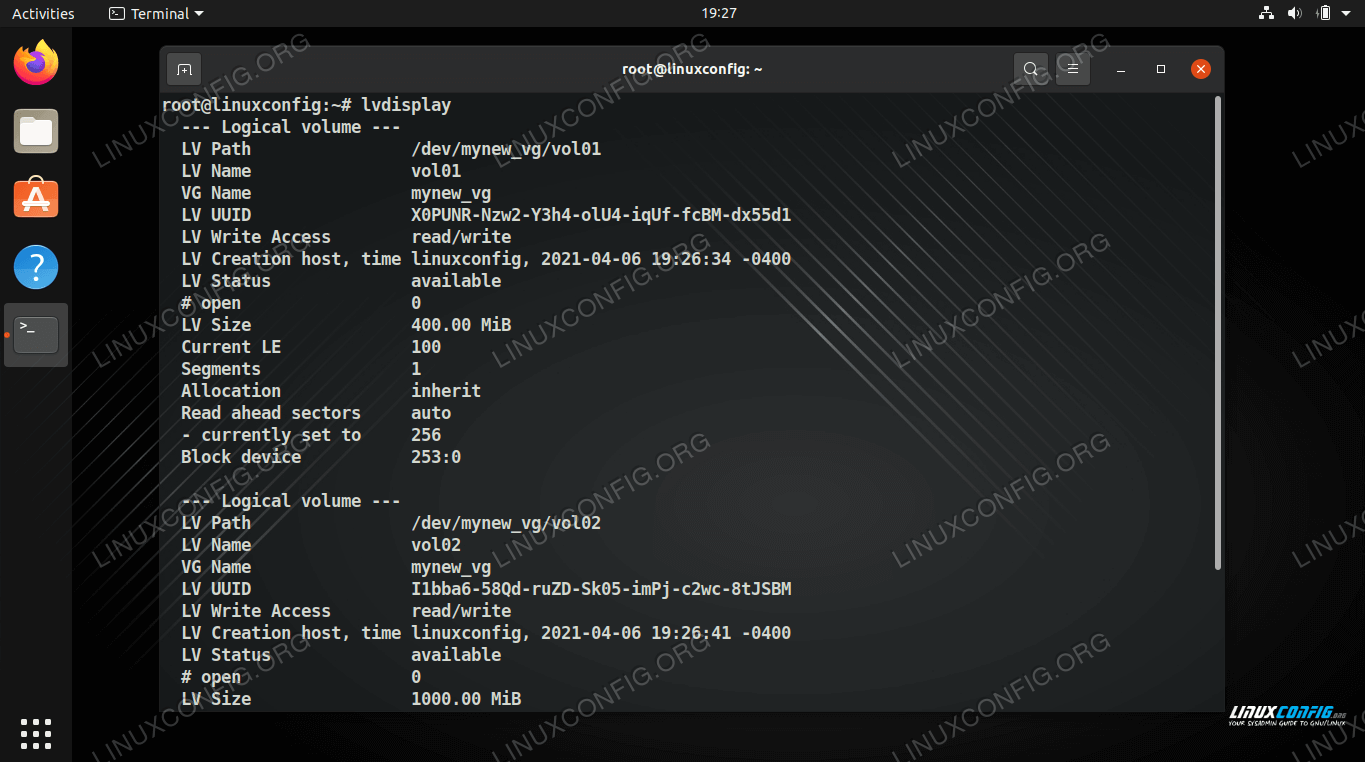 As you can see from the screenshot below, vgdisplay shows us that we still have 3.6GB of free space in the mynew_vg virtual group. 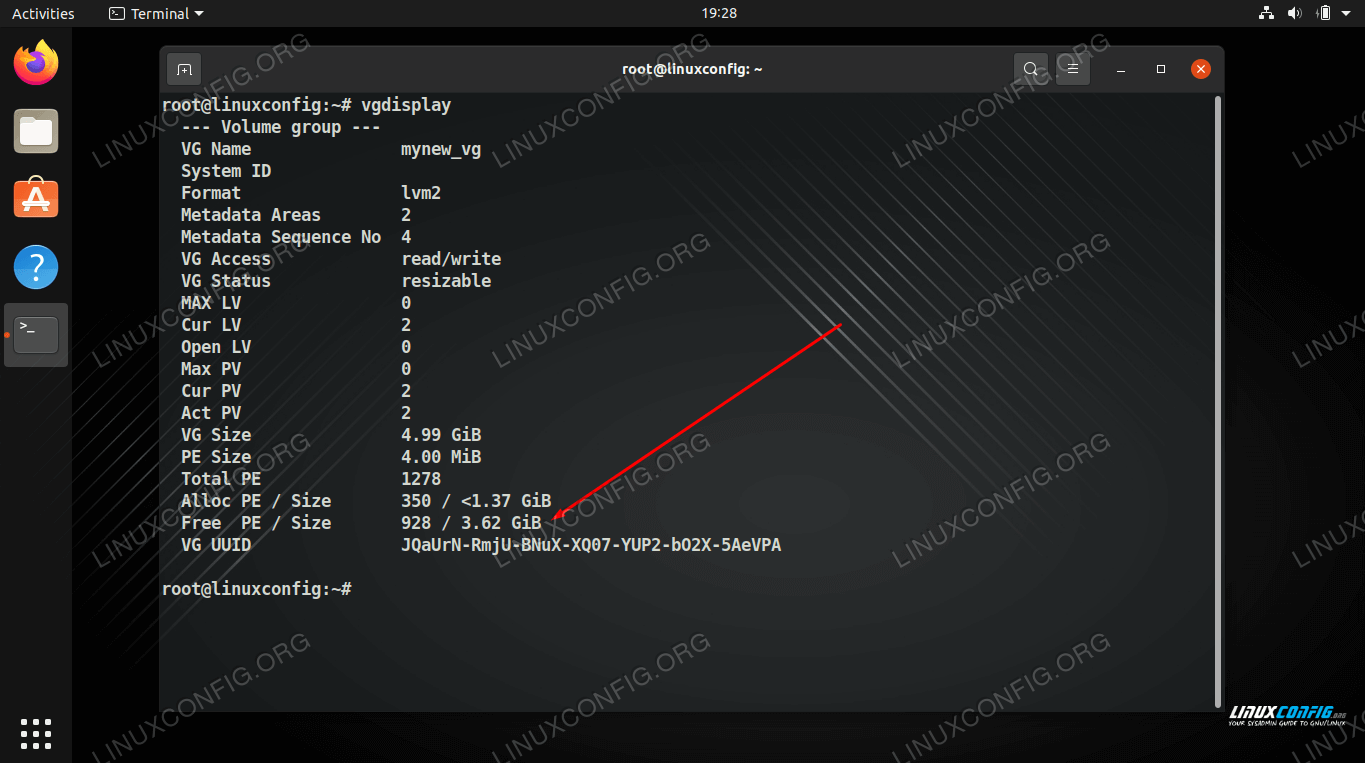 vgdisplay shows that we still have 3.6GB of free space

Create a filesystem on logical volumes

The logical volume is almost ready to use. All we need to do is to create a filesystem on it with the mkfs command.

The -m option specifies the percentage reserved for the super-user, we can set this to 0 to use all the available space (the default is 5%). 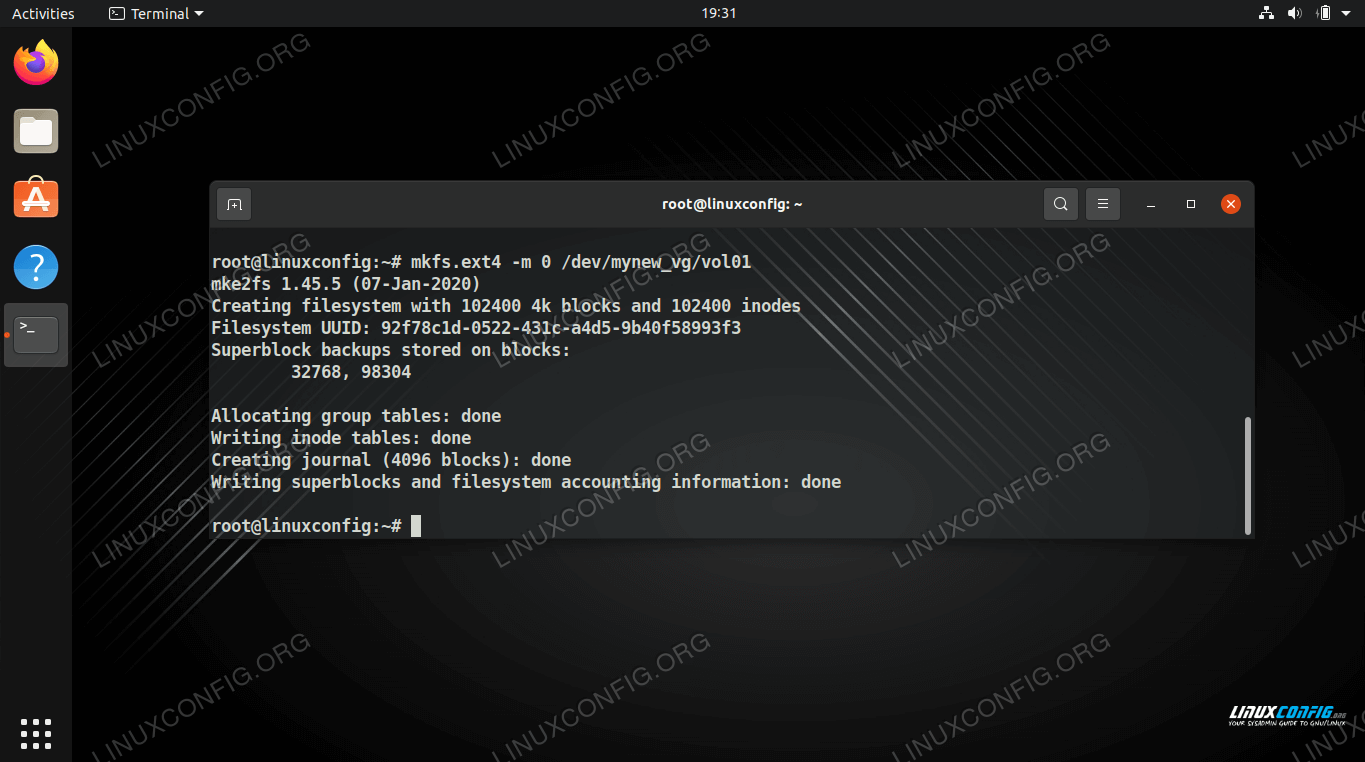 Making an ext4 filesystem on the logical volume

For the filesystem to be automatically mounted, we should add an entry for it into the /etc/fstab file. This will mount the partitions for us when the computer boots up in the future.

The entry you add should look something like the screenshot below. 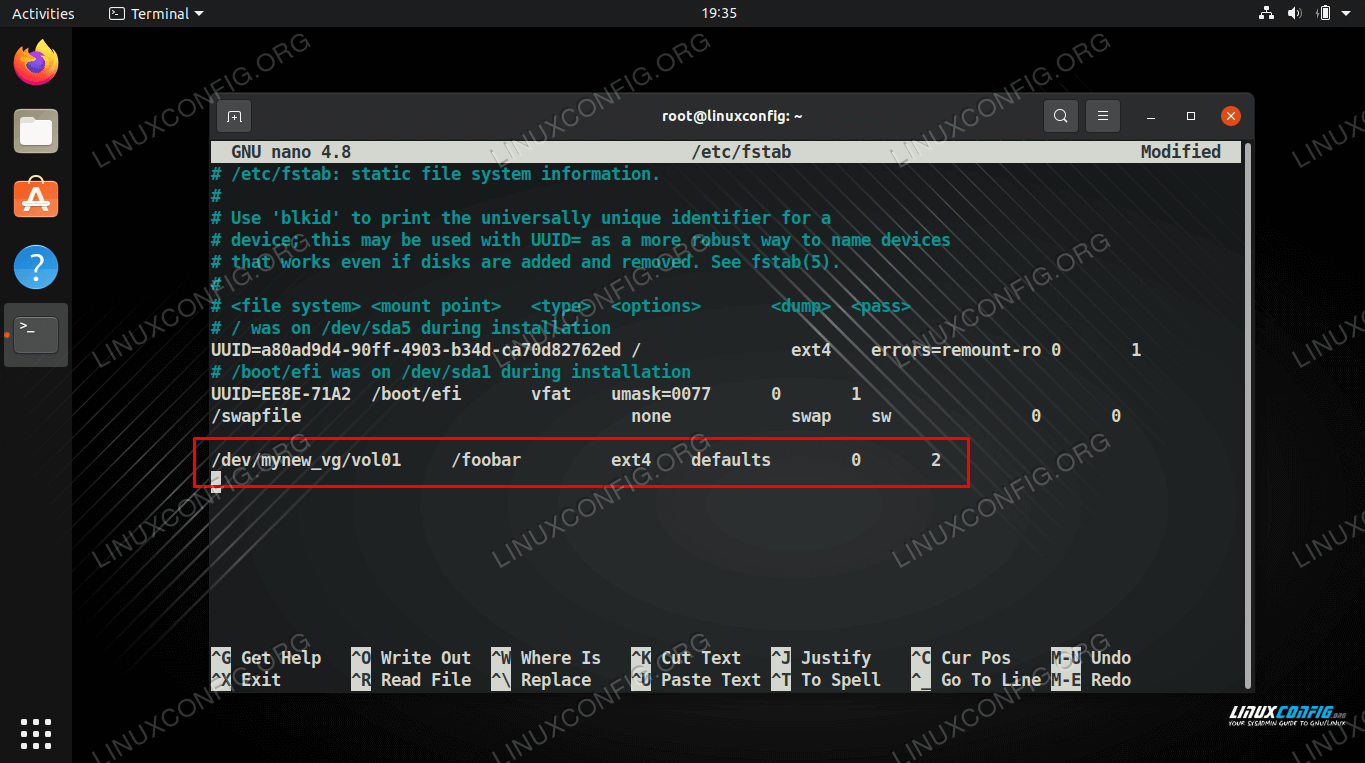 Add a line to fstab

In order to use our new volumes, we’ll need to mount them. Don’t forget to also create the mount point first. 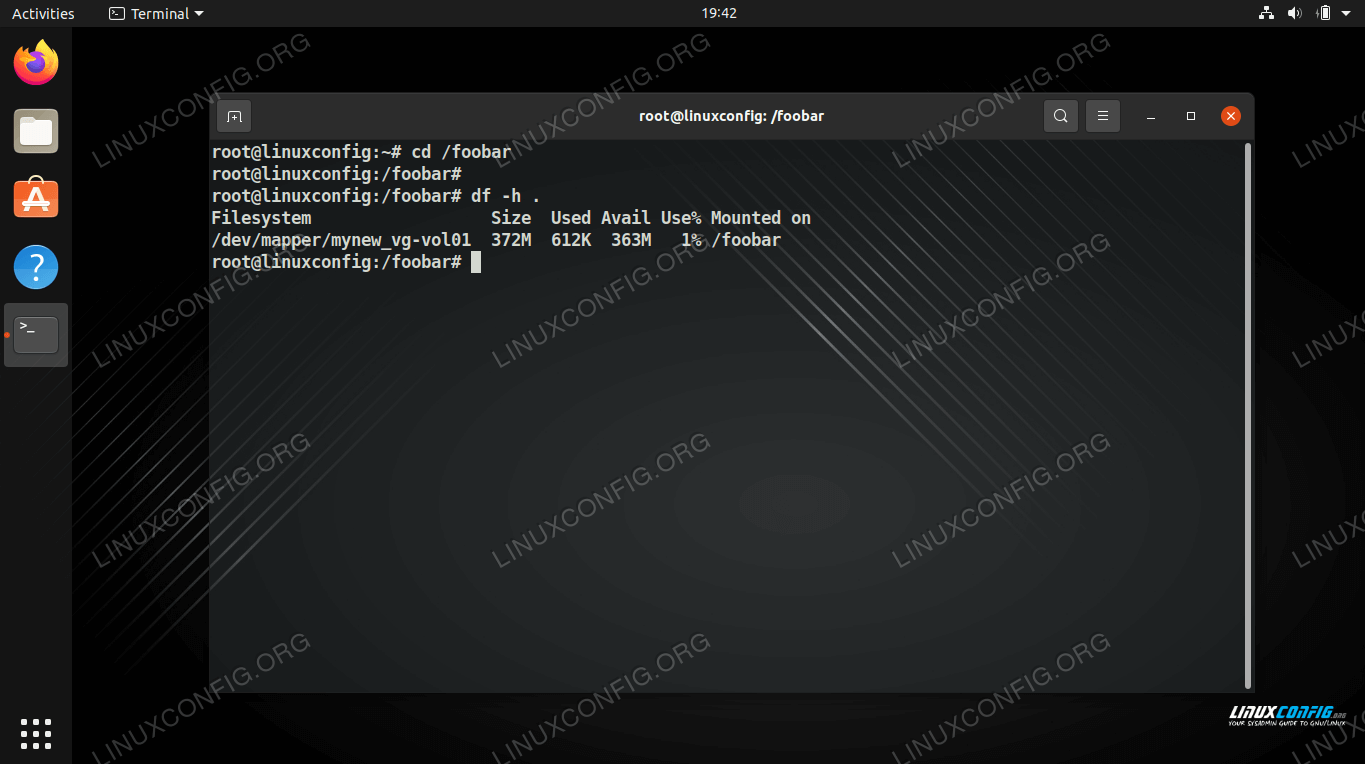 We have 360MB available on our mounted partition

Notice in the screenshot below that the command doesn’t actually increase the size of the filesystem, but only that of the logical volume. 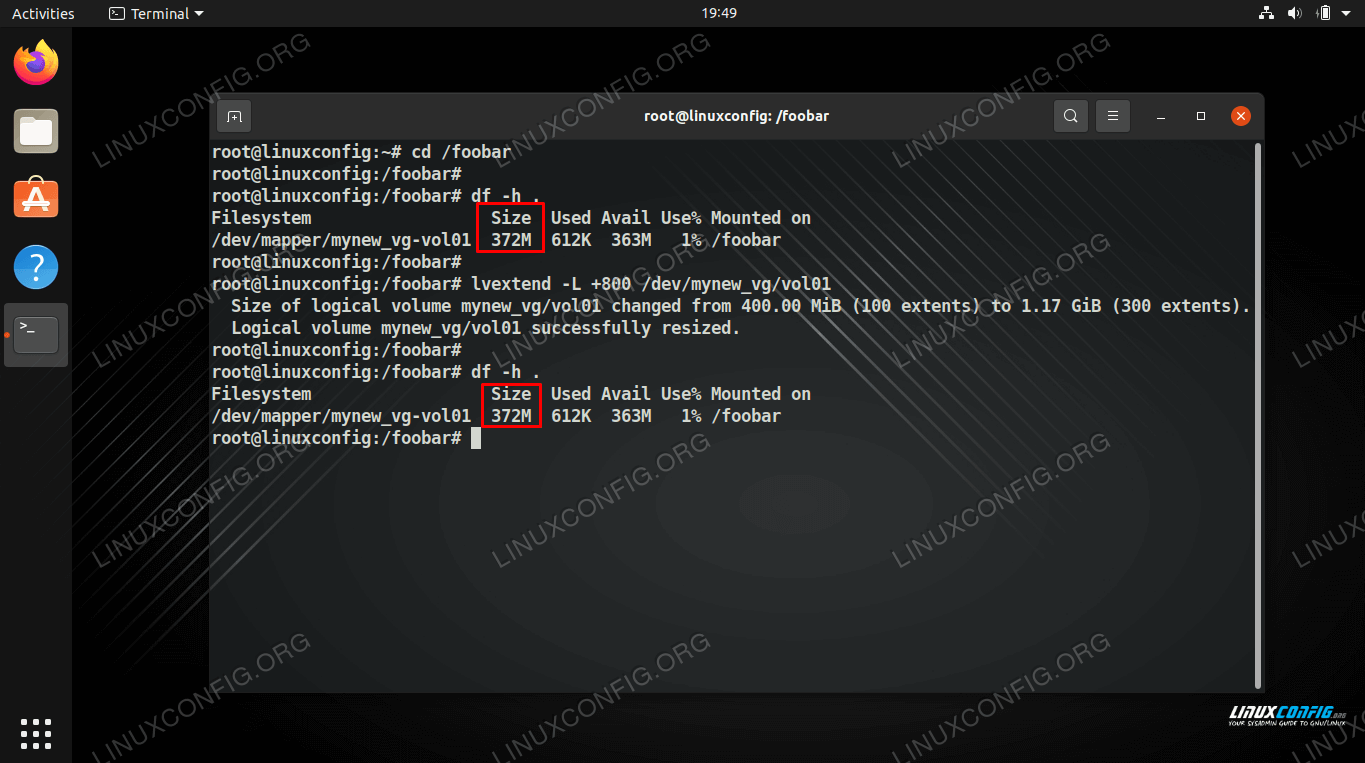 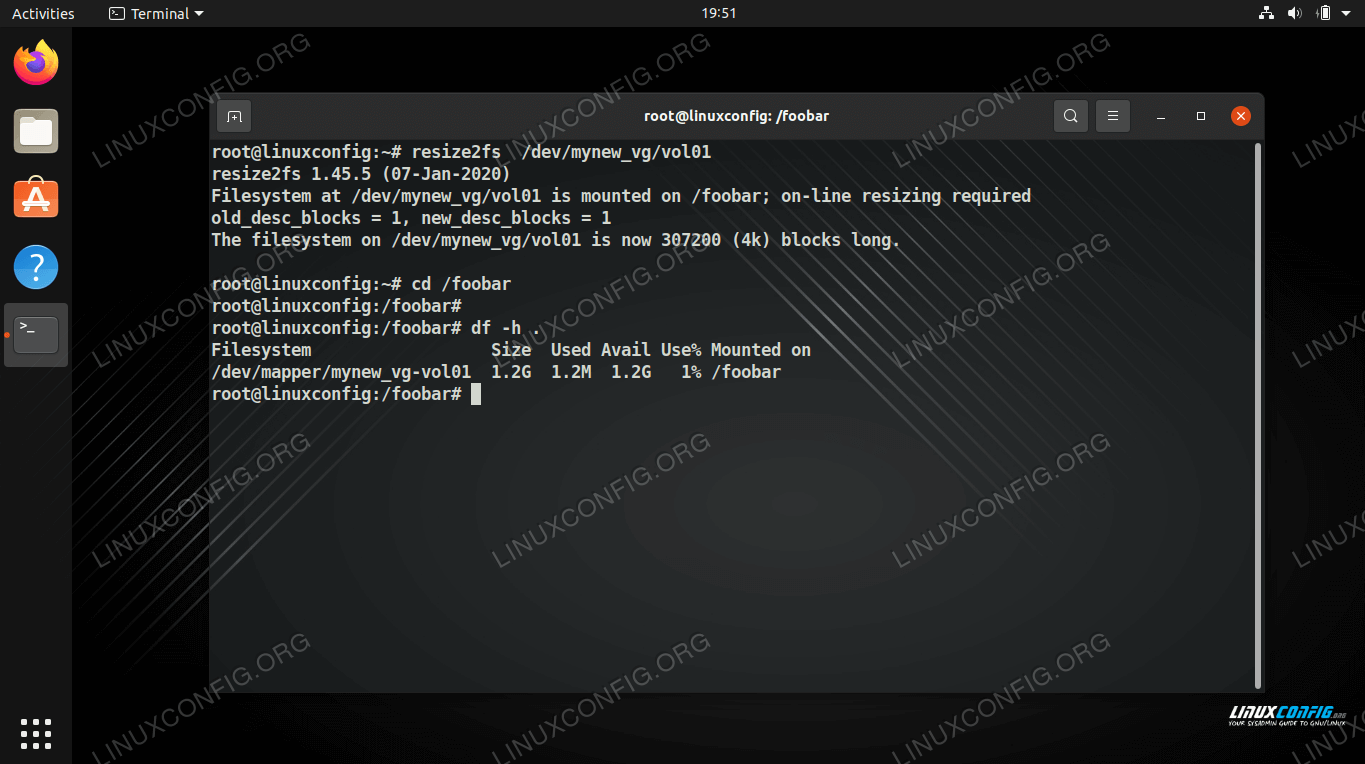 On some systems, especially older ones, you may be required to unmount the volume and run e2fck before being able to extend it. 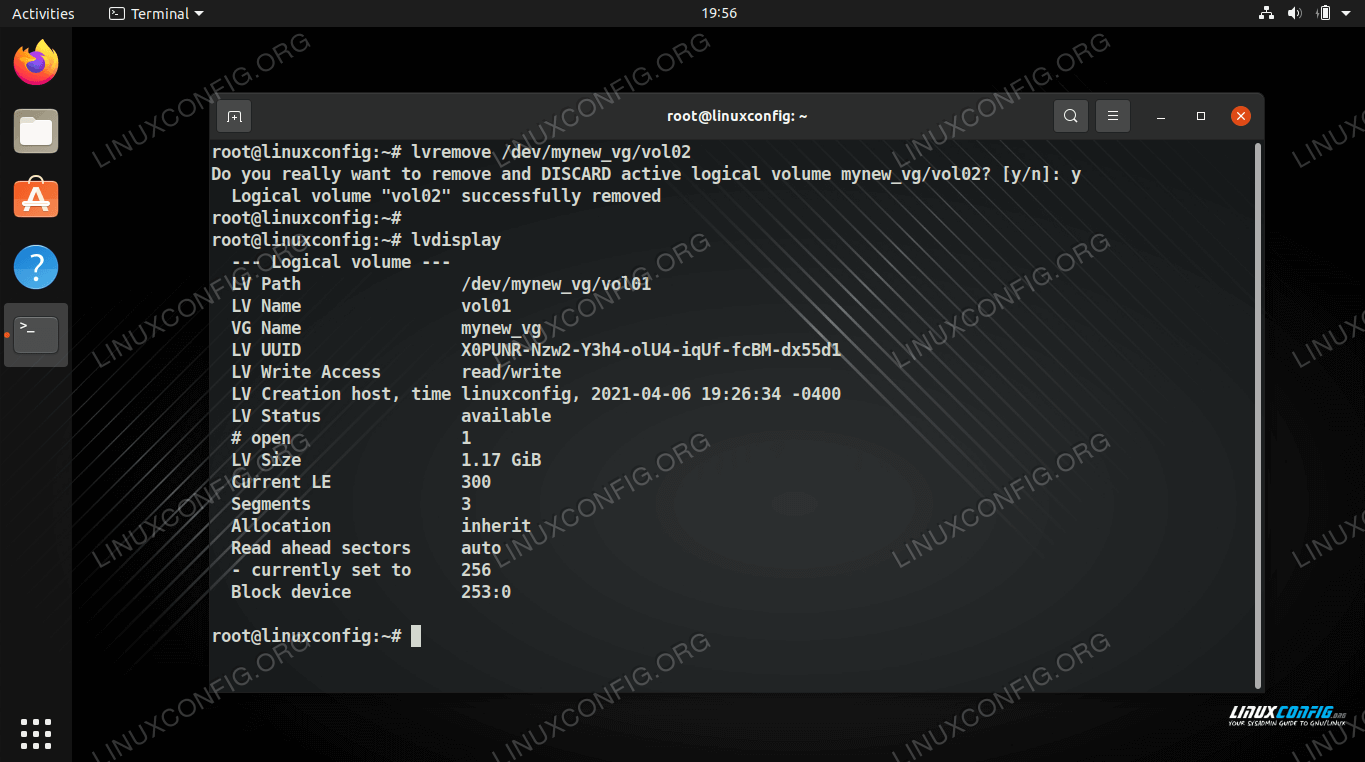 Removing a logical volume in LVM

In this guide, we took you through the step by step instructions to create two physical partitions within the same volume group using LVM. We also saw how to add a filesystem, mount the partitions, and extend the logical volumes. This should give you a good understanding of how LVM works, and how to use it to apply your own storage configurations.