In this guide, we’ll show you the step by step instructions to add a user to a group on a Linux system. It’s possible to add new users to a group when the new user is being created, or you can add existing user accounts to a group. This can be done through both GUI and command line. But the command line method will work exactly the same across any Linux distribution you may be running, including Ubuntu, Debian, Red Hat, CentOS, AlmaLinux, openSUSE, etc. We’ll be covering both methods in this guide, so you can pick whichever option is most convenient for you. 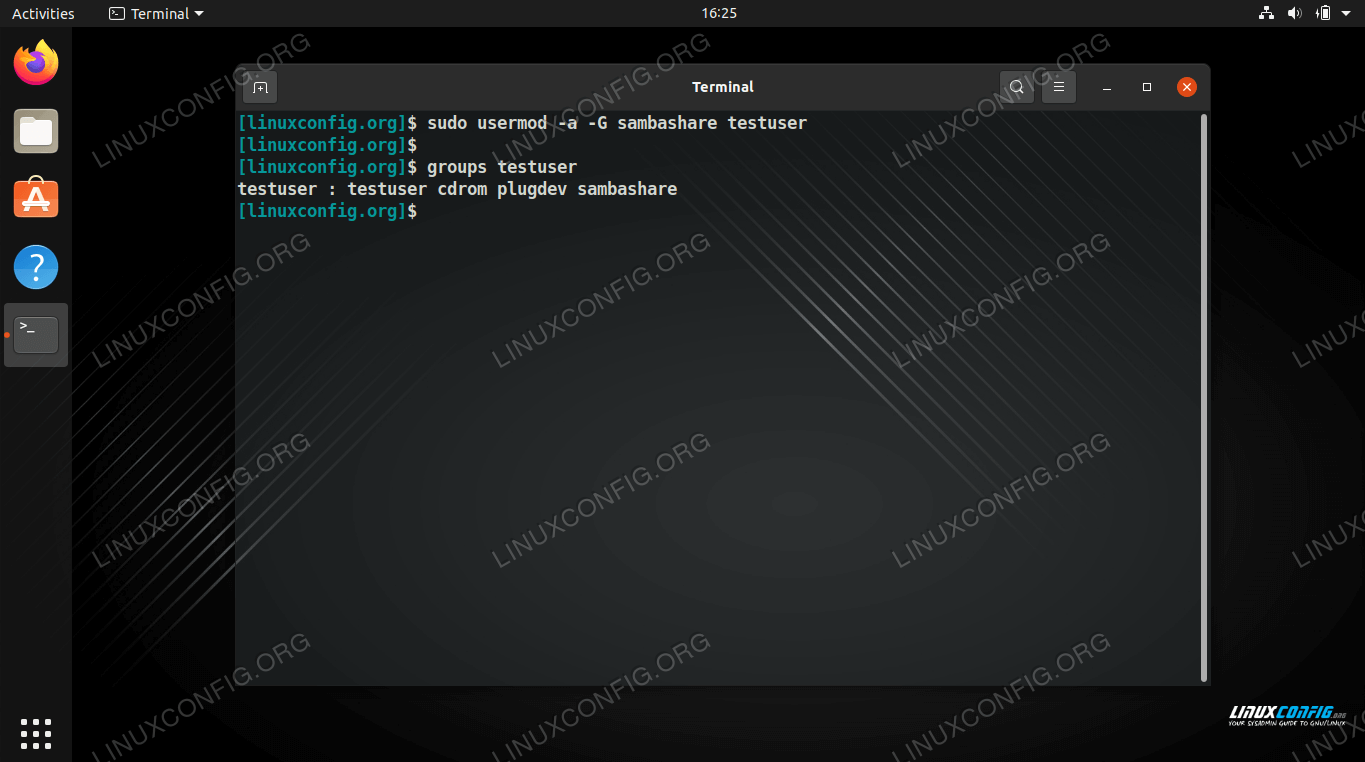 Adding a user to a group on a Linux system

This is a quick command line summary on how to add user to group on Linux using the usermod command. Please note you might need to re-login or restart your system in order for the new group settings take place:

Add user to an existing group:

Add user to an multiple groups:

Check to which groups user belongs to:

Add a user to group via command line

To read all the groups available on your system, you can execute the following command in terminal. 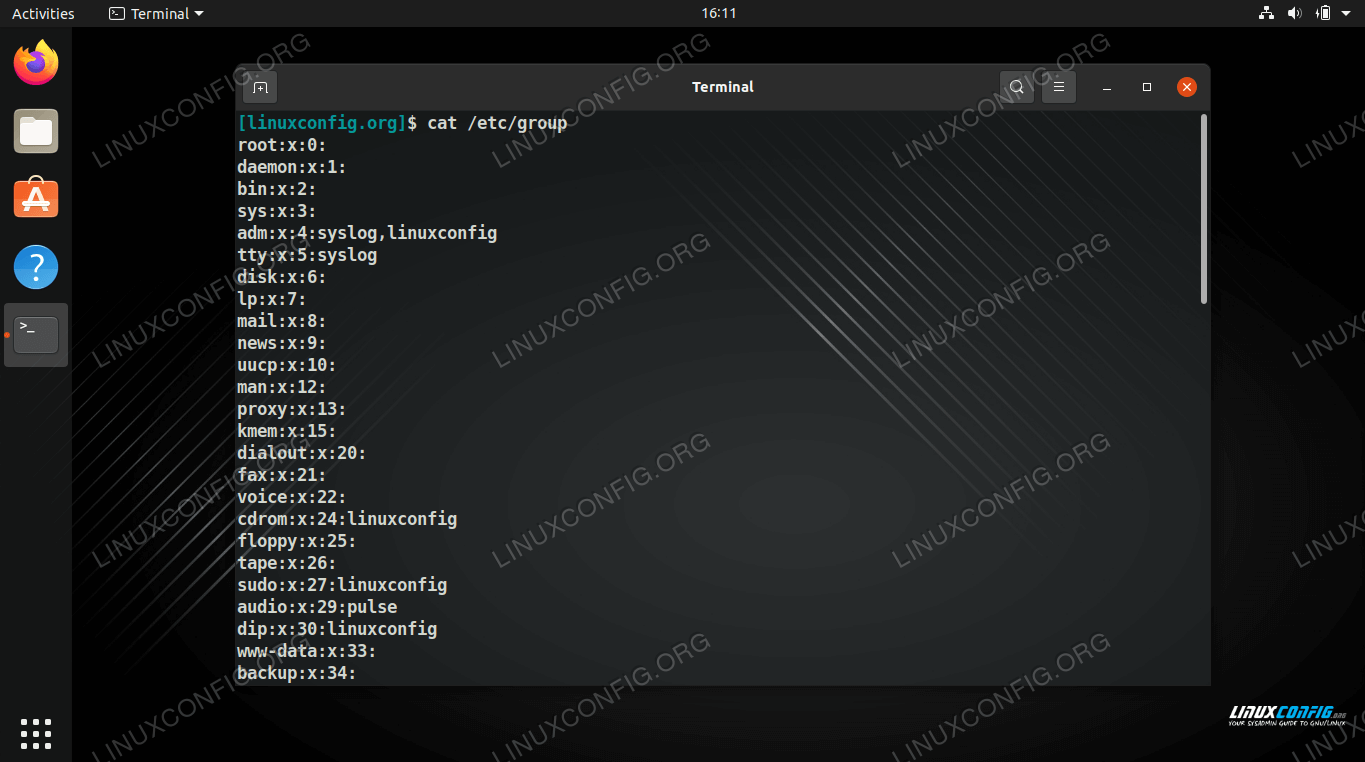 Viewing all the groups available on the system

This will also show you what users belong to which groups. As you can see in the screenshot, our user “linuxconfig” is already part of a few groups.

To see a list of all the groups that your current user is in, you can just execute the groups command. 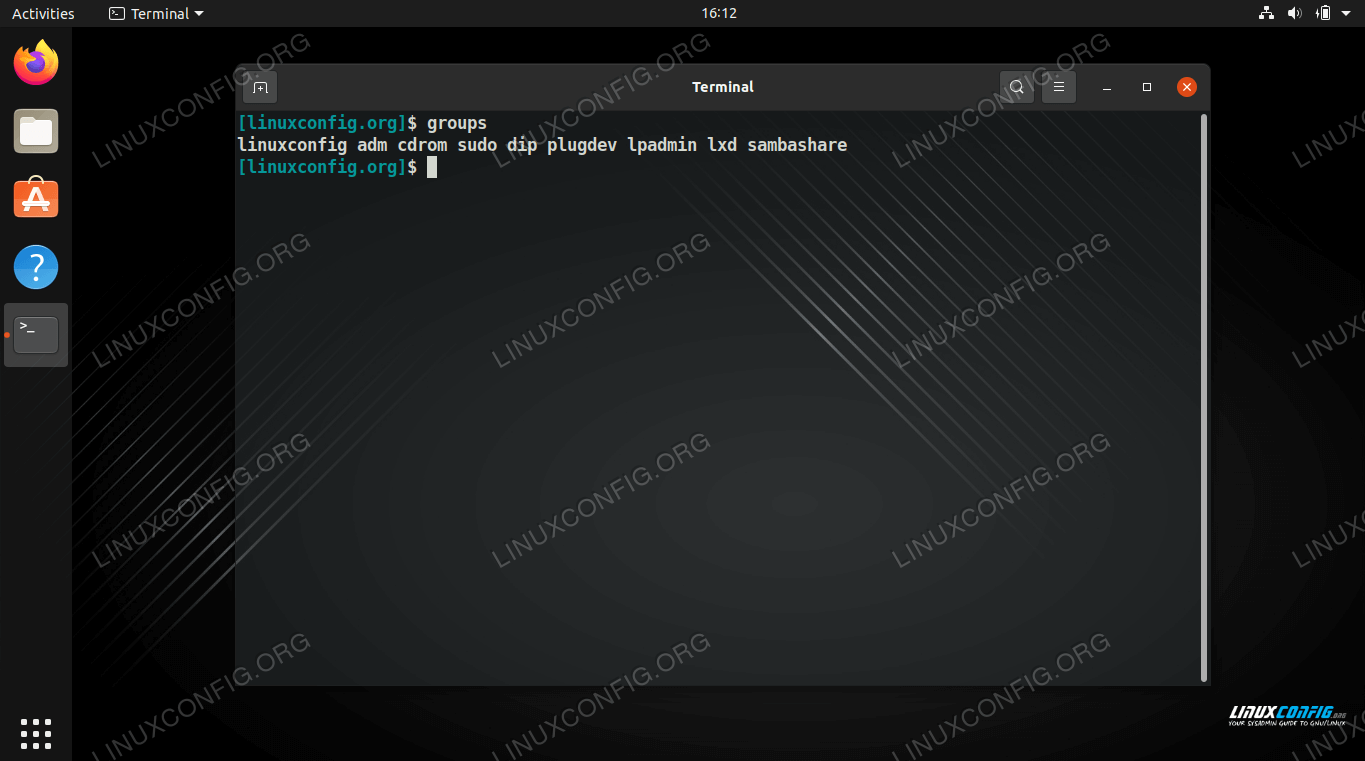 Show the groups that the current user is in

If you’d like to also see the group IDs, you can use the id command instead. 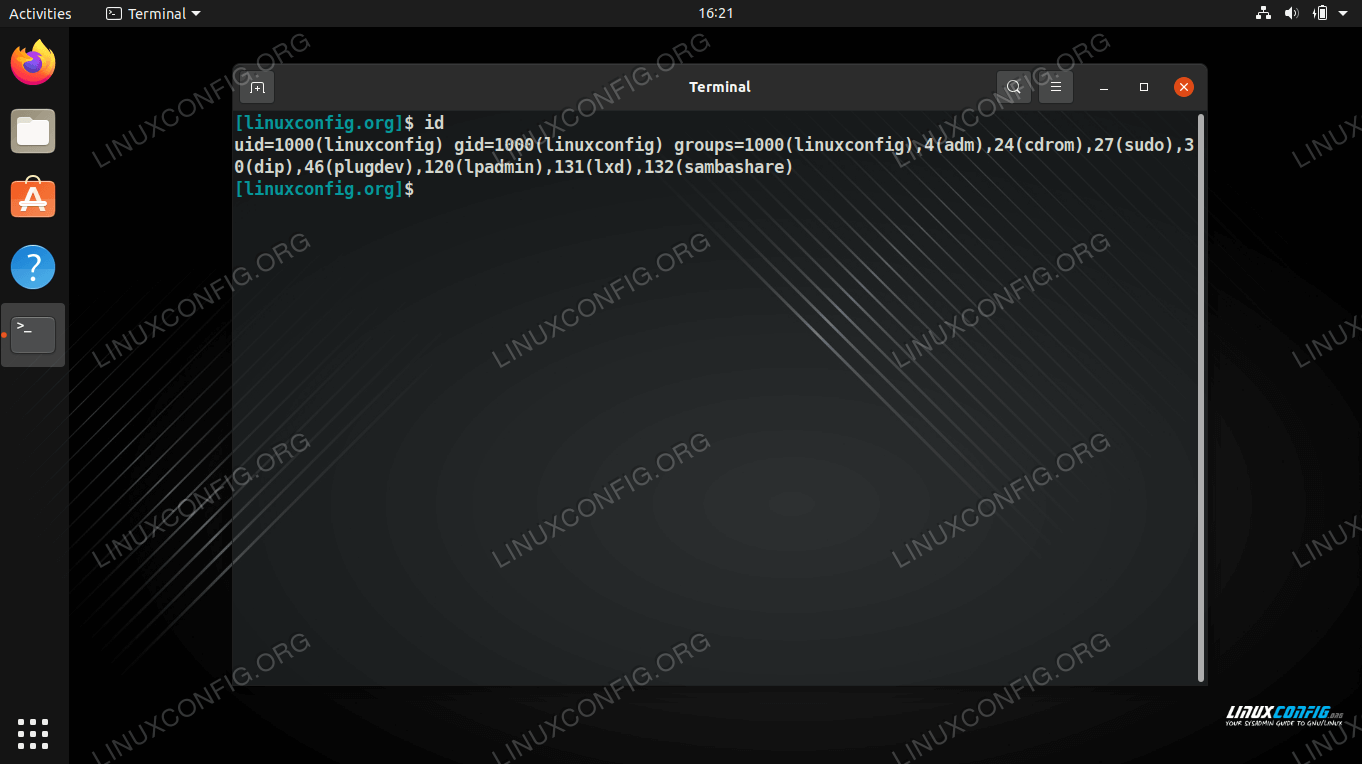 Show the group the current user is in, while also showing all the group IDs

When adding a new user to the system with the useradd command, you can use the -G option to specify which groups you want the user to be a part of. Note that the groups you specify must already exist on the system (in other words, this will not create new groups). Make sure you list each group separated by a comma, with no extra whitespace in between. In this example, we’ll create a new user called “testuser” and, at the same time, add the account to the cdrom and plugdev groups.

The above will add user to group on any Linux. To verify that the new user has successfully joined these groups, execute the groups command and pass the name of the new user to the command. 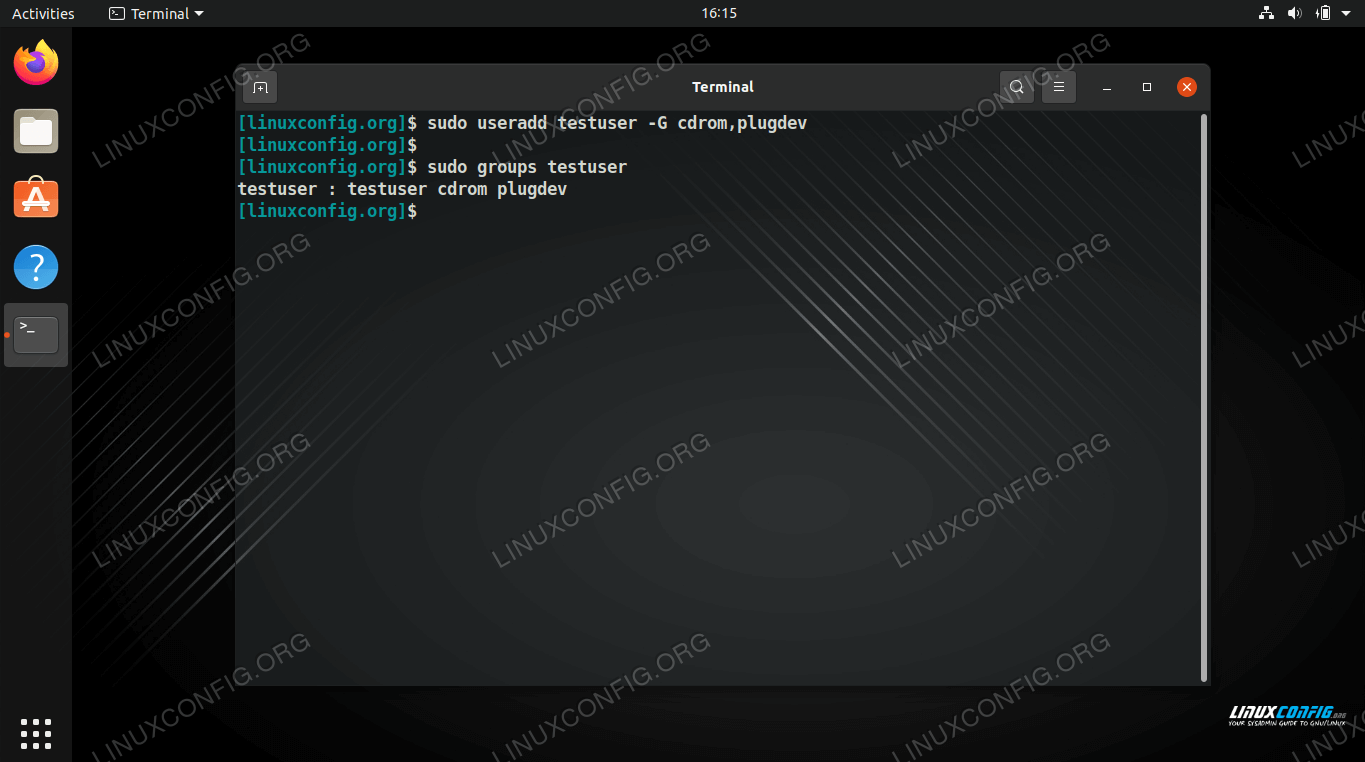 As you can see in the screenshot above, the user is now part of the cdrom and plugdev groups. It’s also part of the “testuser” group. Whenever a new user is created, a new group with the same name is also created, and the user is a part of it automatically.

If you want to add an existing user account to a group, that can be done with the usermod command. Check the following syntax where we add “testuser” to the “sambashare” group. Note the syntax here, which is a little tricky, because you need to specify the group name and then the user name.

And then verify the user is added…

Adding an existing user to a group

To add an existing user to multiple groups at the same time, use the same syntax as above while separating each group name by a comma. Check this example where we add testuser to three more groups, and then verify that it was successful. 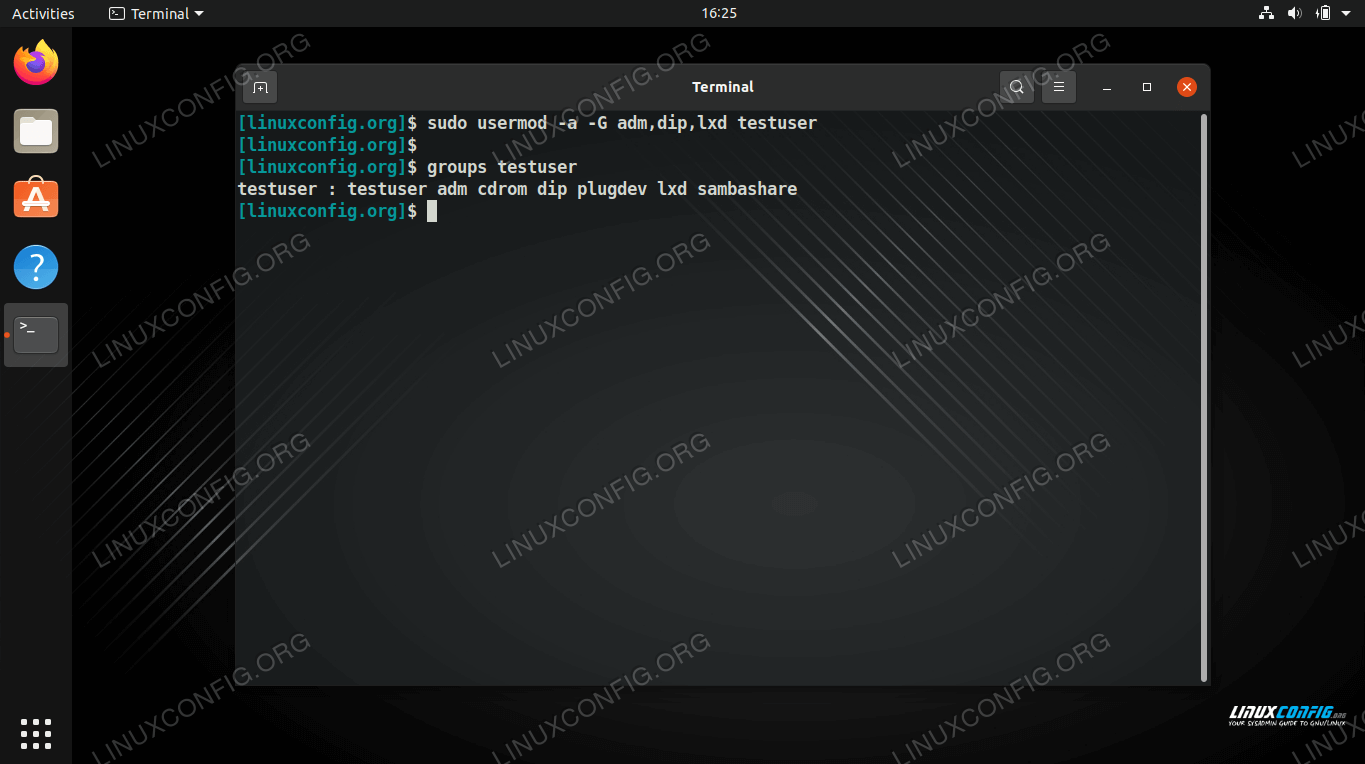 Adding a user to multiple groups at the same time

There are more methods of adding users to groups, such as manually editing the /etc/group file, but the examples covered above are the easiest and most recommended approaches. See the section below if you’d prefer to use GUI to add users to groups.

Add a user to a group from GNOME GUI

In this guide, we saw how to add a new or existing user account to a group via command line and GNOME GUI. We also learned how to view the groups and group ID of any user account. This is a basic task that most users will find they need to do at some point, and Linux makes the process quick and easy.