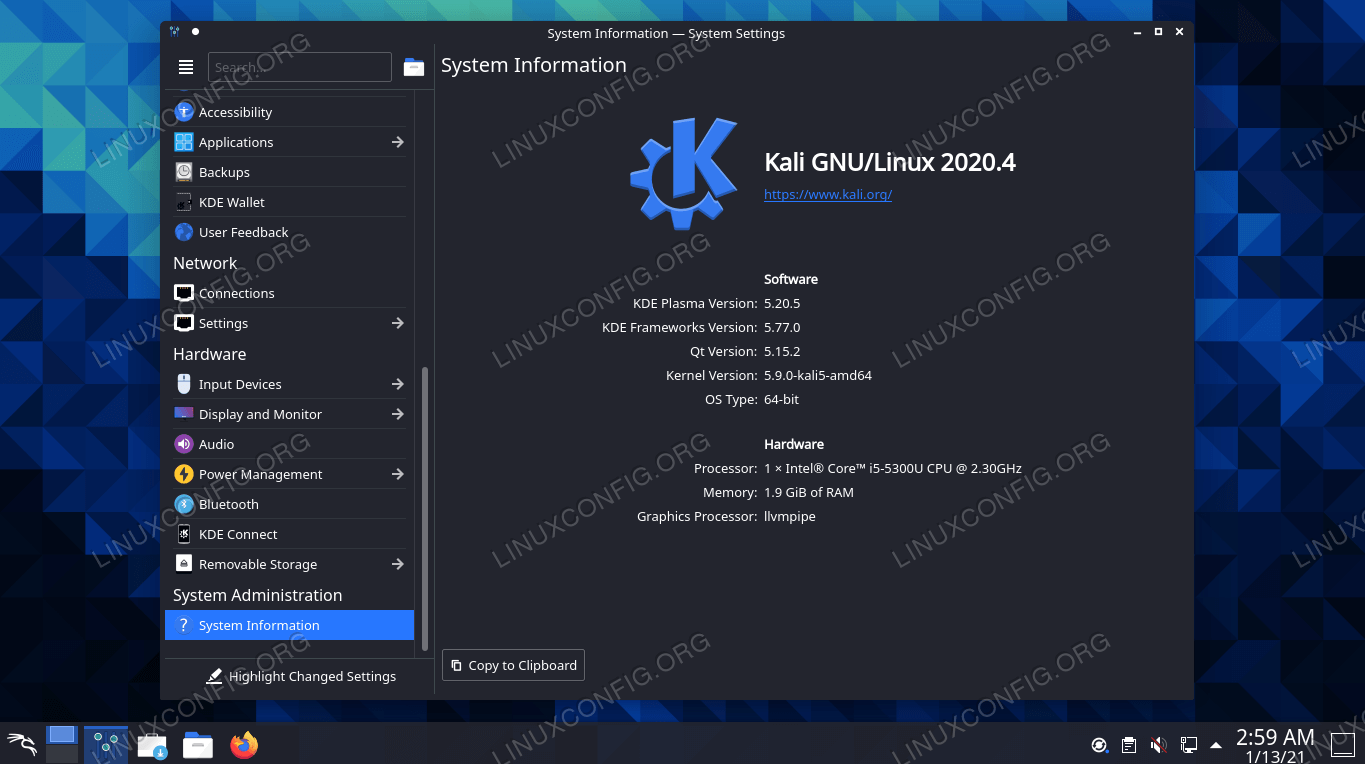 How to install KDE dekstop on Kali Linux

Most Linux distributions have a "main" desktop environment they use - the one that comes installed by default in the distro's most popular download. For Kali Linux, it's Xfce.

If you prefer KDE Plasma over Xfce or are just looking for a change of scenery, it's quite simple to switch desktop environments on Kali. In this guide, we'll walk you through the steps to install the KDE desktop environment on Kali Linux. 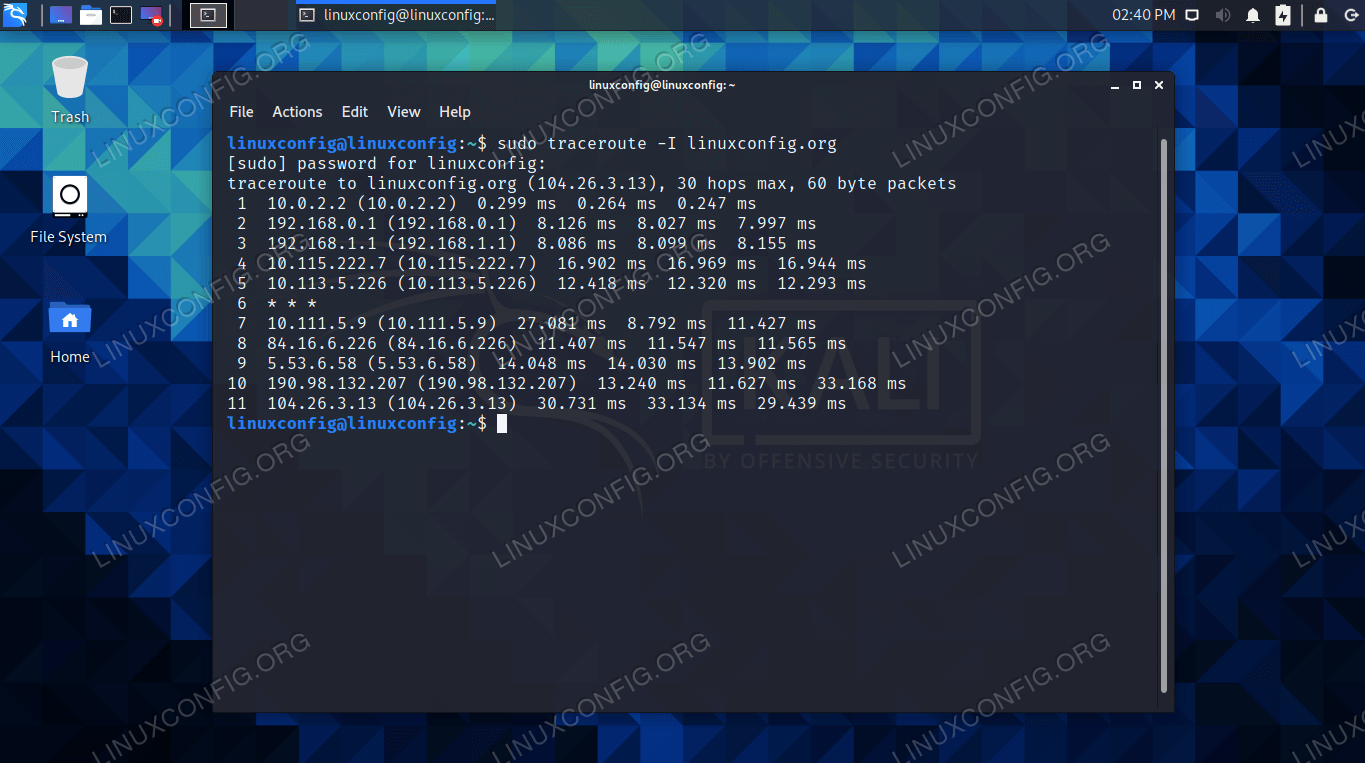 How to use traceroute on Kali Linux

When performing digital reconnaissance or penetrating testing, it's important to fingerprint a network by understanding what servers or devices sit between your system and a target. For example, security professionals can't go straight to attacking a web server without first taking the time to see if there's a firewall in front of it.

This is where the traceroute utility comes in. It can send a packet from your system to the target machine, and list out its entire route for the journey there. This will reveal how many devices your network data is passing through, as well as the IP address of each device.

Kali Linux has another similar reconnaissance utility called mtr, which mostly functions the same as traceroute. In this guide, we'll see how to use traceroute and mtr, along with their various command options, on Kali. 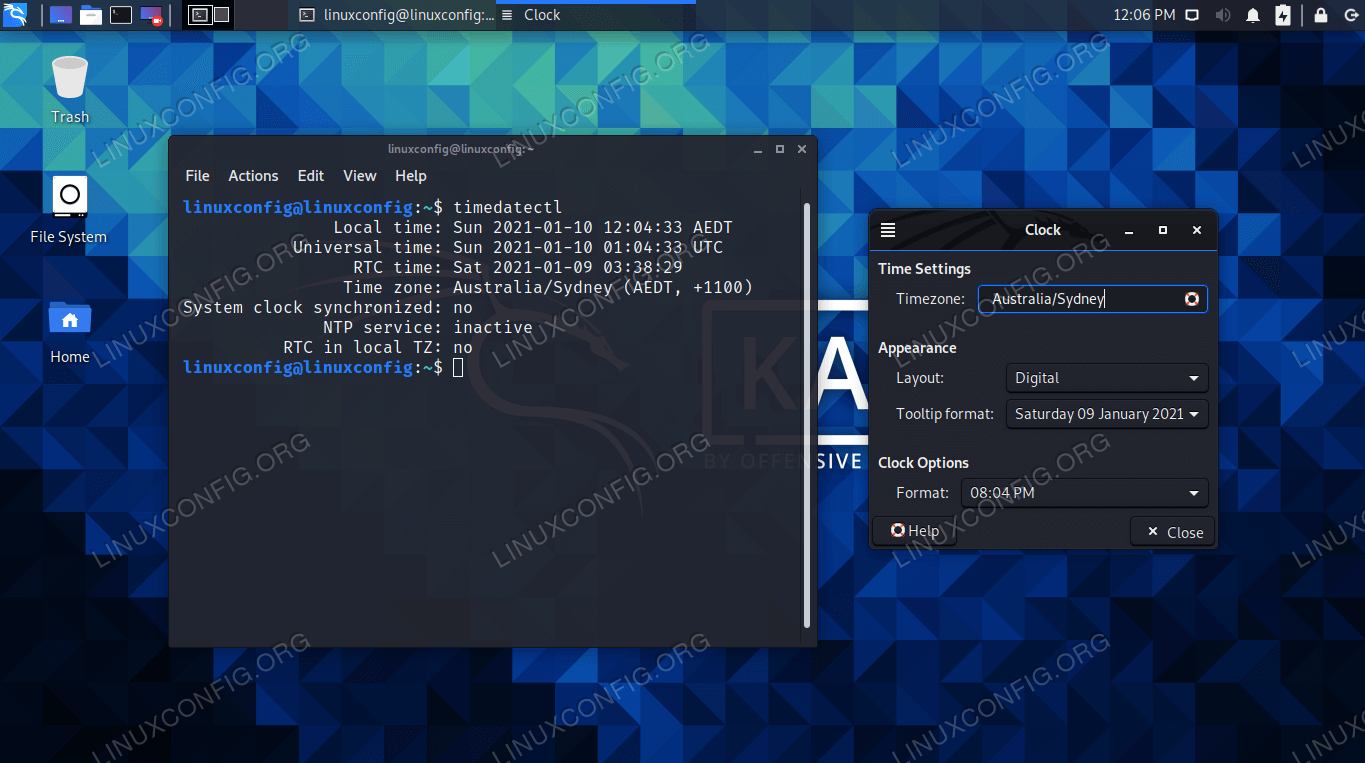 How to set time on Kali Linux

The objective of this guide is to show how to set the system time on Kali Linux. This can be done from both GUI and command line, so we'll be covering both methods in the following instructions.

Setting your system time and time zone is usually done when initially installing Kali. If you skipped that step during installation, have switched time zones, or your system clock has drifted out of sync, we'll help you get it fixed. 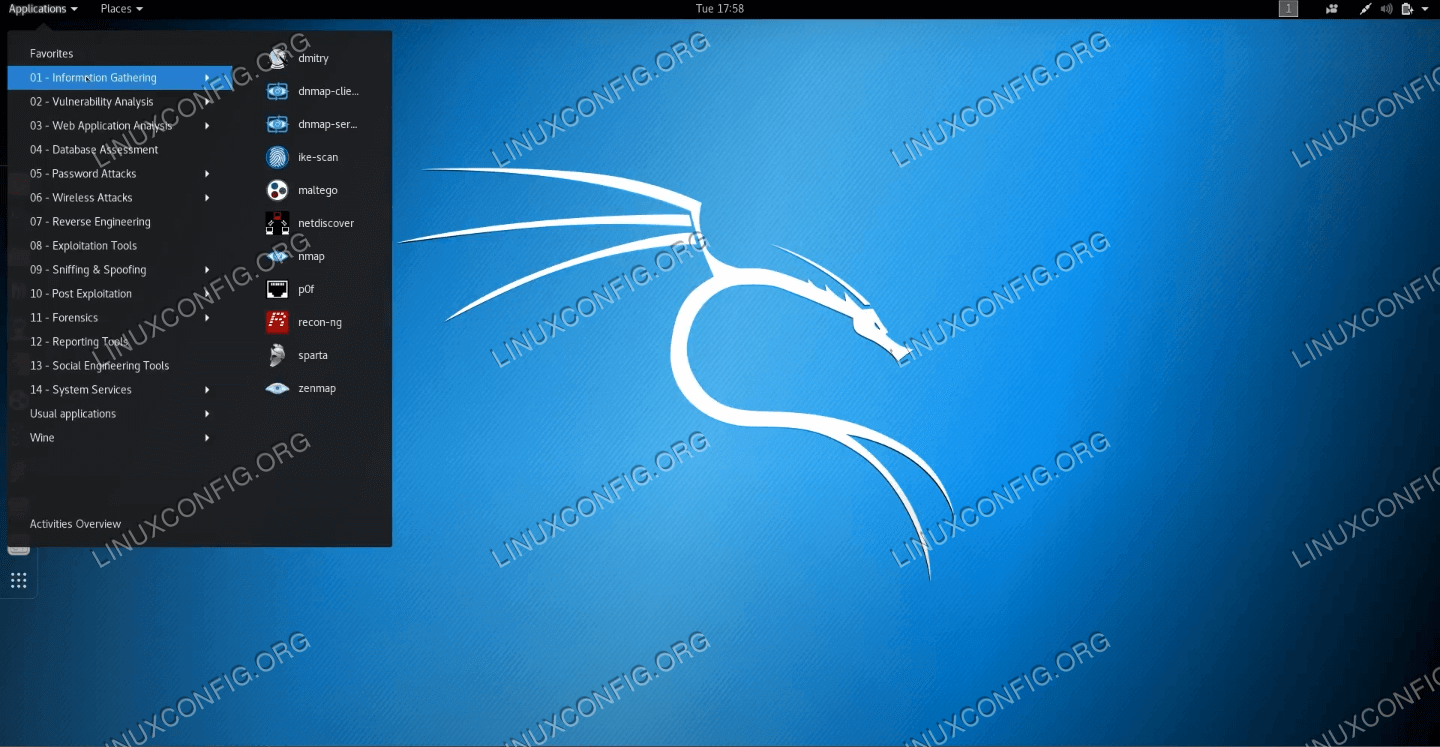 Kali Linux is a Linux distribution geared towards cyber security professionals, penetration testers, and ethical hackers. If you are thinking about installing it on your system but need to know the minimum or recommended system requirements first, we've got you covered in this guide. 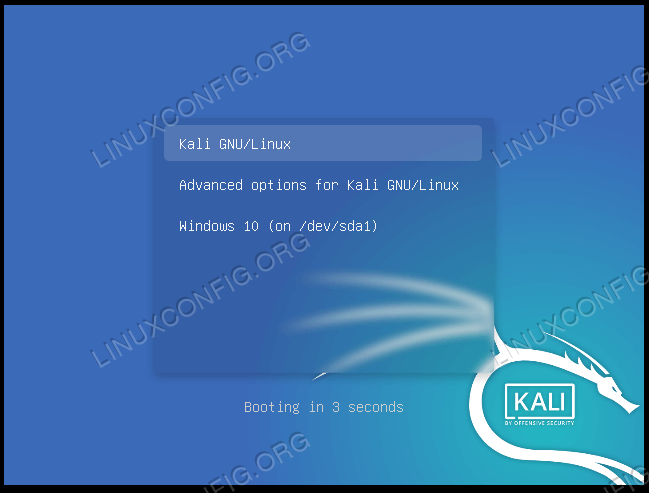 How to dual boot Kali Linux and Windows 10

The other option is to create a dual boot environment for Kali and Windows. Both options have their pros and cons. The main reason you might want to dual boot with Kali, as opposed to running it in a virtual machine, is to give Kali direct access to your system's hardware. This way, you don't have the overhead of a hypervisor, and direct access to components is a lot easier, such as for a Wi-Fi adapter. This is a big selling point if you plan to test the security of Wi-Fi hotspots, for example.

A dual boot environment works by prompting you at startup to select which operating system you'd like to load into. So, you'll have to reboot your computer each time you want to load into a different operating system. That's the only disadvantage of this method, but for a system like Kali it should prove worth it.

Ready to get Kali Linux installed alongside Windows 10? Read on below as we take you through all the steps. 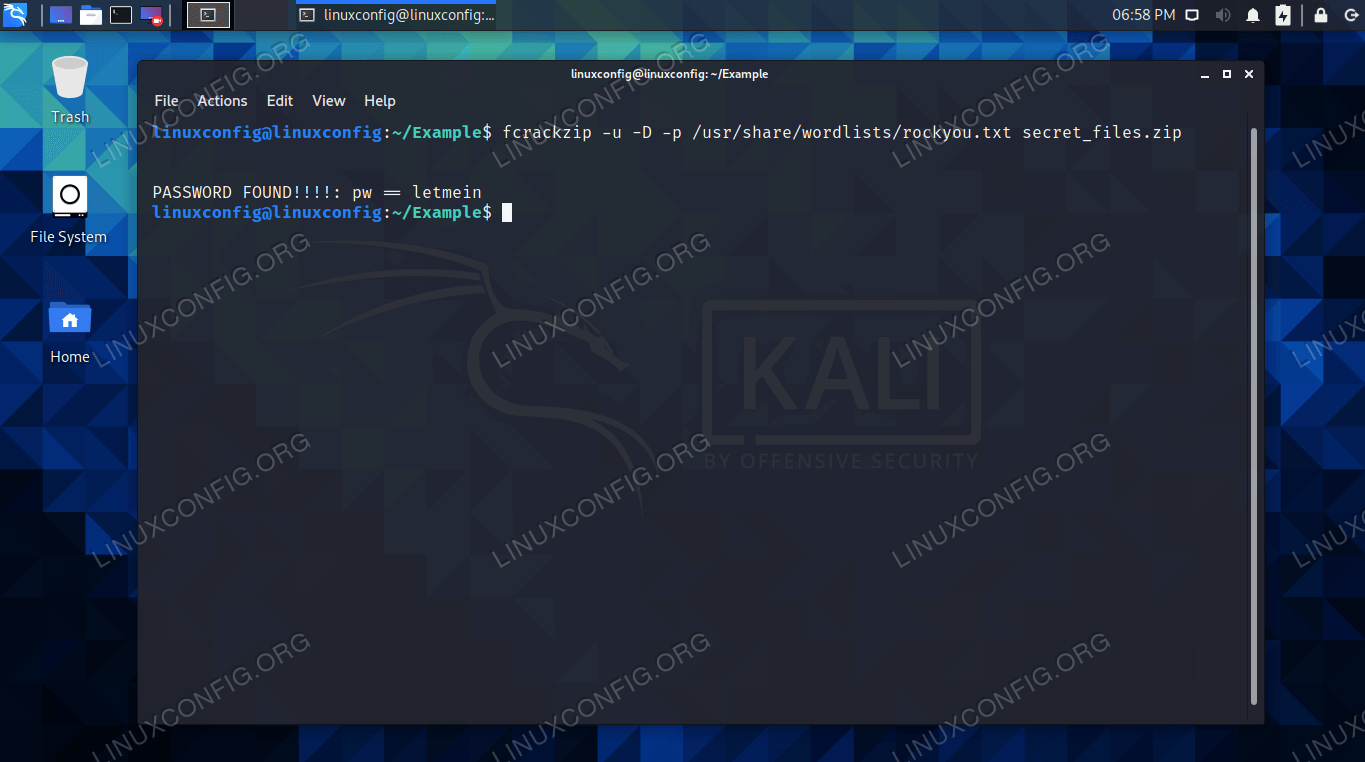 The objective of this guide is to show how to crack a password for a zip file on Kali Linux.

By default, Kali includes the tools to crack passwords for these compressed archives, namely the fcrackzip utility, John the Ripper and a word list. Follow along with us in the step by step instructions below as we show two different methods for cracking the password of a zip file. 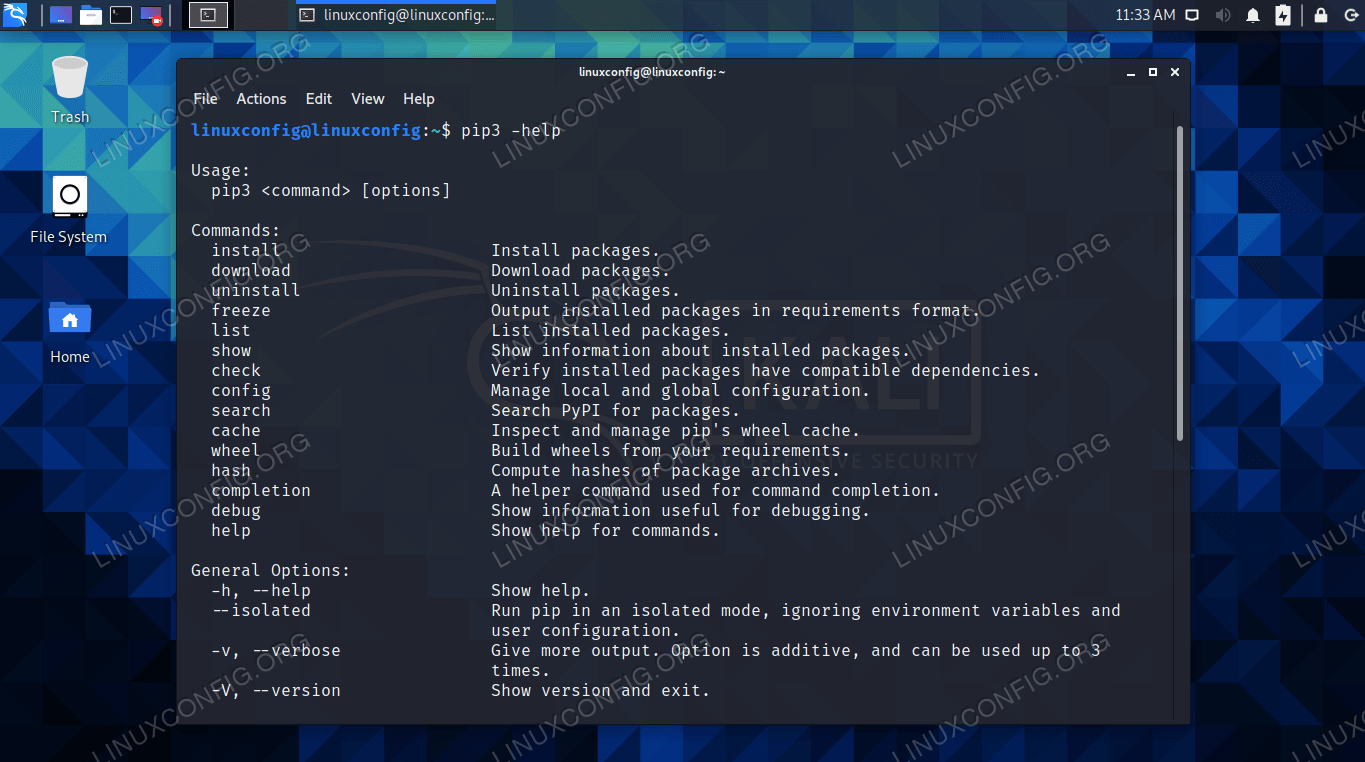 How to install pip on Kali Linux

Python is a common language to use for hacking scripts, and on Kali Linux, the biggest use for pip would be to install needed dependencies for Python hacking programs. Whether you are developing your own script or trying to execute a third party Python program, having pip on your system will allow you to install dependency packages very easily.

In this guide, we'll show you how to install pip for Python 3 on Kali. We'll also show you basic usage commands for pip, such as installing and removing software packages. pip operates much like Kali's package manager, which you're probably already familiar with.

The objective of this guide is to show the default username and password for Kali Linux. The guide will be applicable for persistent installations, as well as the live CD image and Kali virtual machine downloads in VirtualBox or VMware. 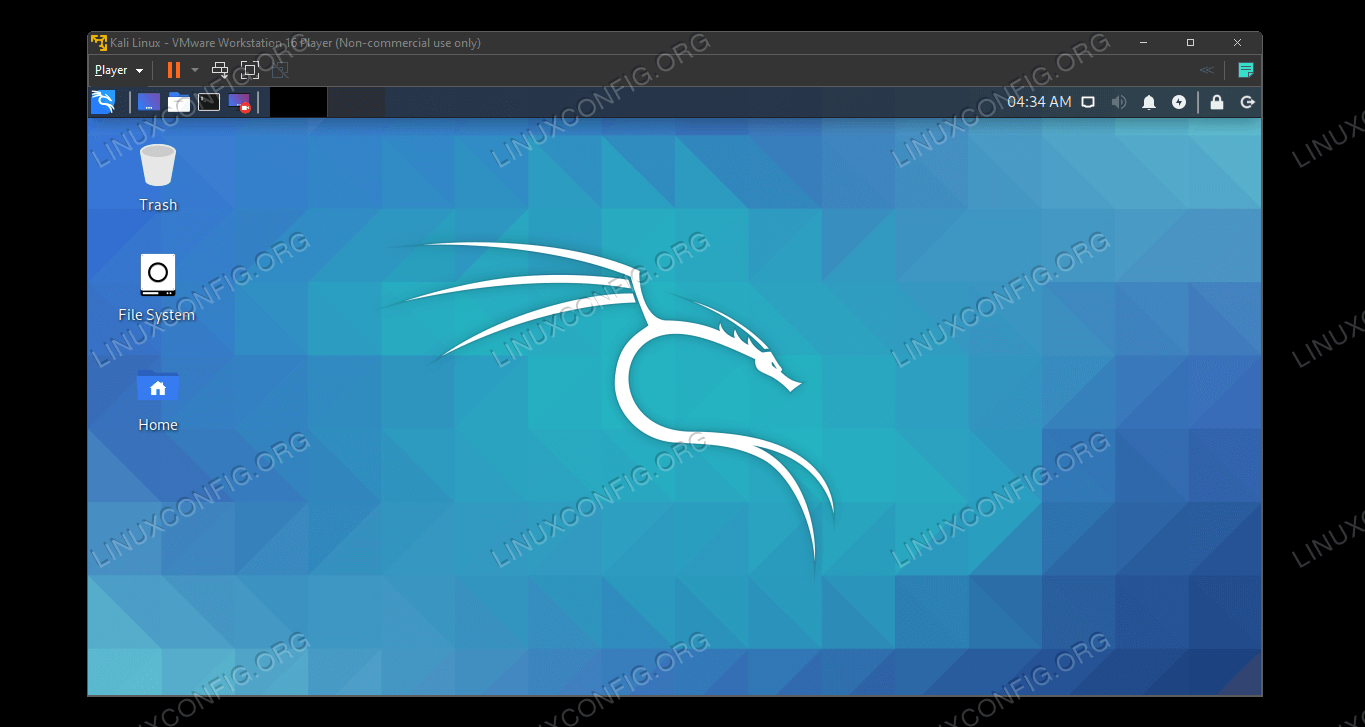 How to install Kali Linux in VMware

Kali Linux is a powerful Linux distro for penetration testing and ethical hacking. It's not meant as an everyday operating system, so most Kali users will utilize the distro by running it temporarily from a USB drive, or opt for a persistent installation in a virtual machine.

Installing Kali in VMware gives you easy access to the hundreds of security and hacking tools that are included with Kali. Any time you need to do some packet sniffing, password cracking, etc. you can simply fire up the virtual machine and get to work. It's also a great way to test out hacking applications without having to install software on your host system.

In this tutorial, we'll show you how to install Kali Linux in a VMware virtual machine. You'll be able to follow along with this guide regardless of your host operating system, so both Linux and Windows users will find these step by step instructions to be applicable. 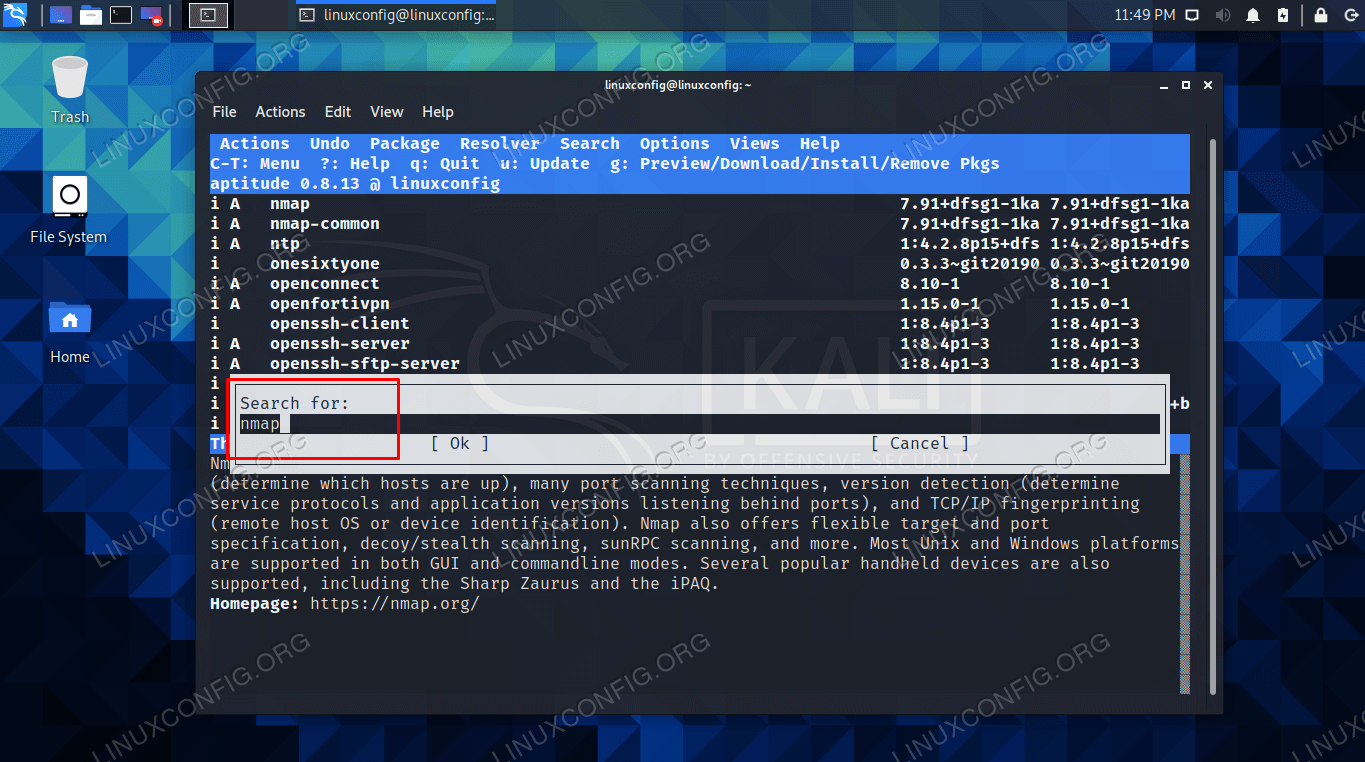 How to search for extra hacking tools on Kali

Kali Linux already comes with a lot of ethical hacking and penetration tools out of the box. There are even more tools available from package repositories, but sifting through hundreds of tools and finding the ones you want to install can be challenging.

We aim to make the task easier in this guide, by showing you how to search for more software and install the tools on your system. If Kali doesn't include some of your favorite tools by default, or you just want to browse the selection of software to see what else might be available, the steps below will help you find useful tools to install.

Searching for packages to install on Kali Linux 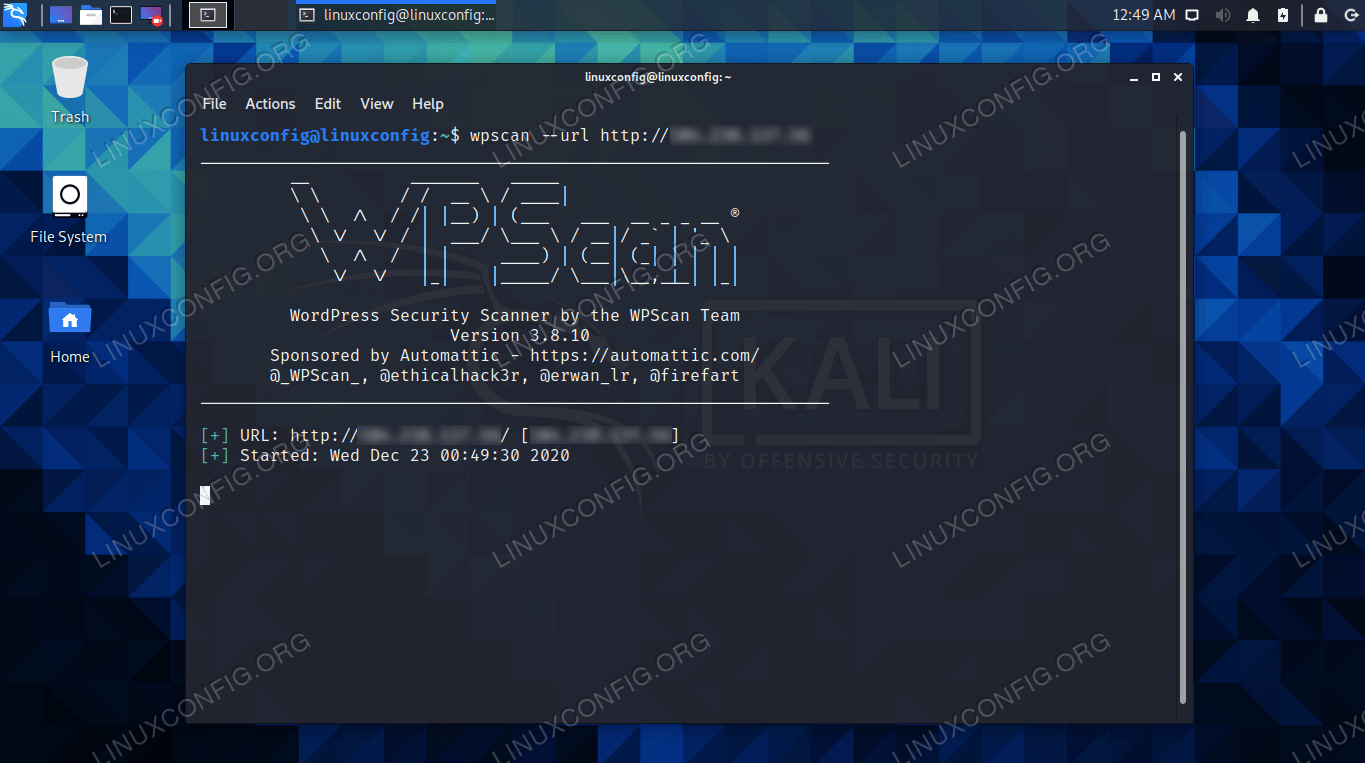 Use WPScan to scan WordPress for vulnerabilities on Kali

Vulnerabilities in WordPress can be uncovered by the WPScan utility, which comes installed by default in Kali Linux. It's also a great tool for gathering general reconnaissance information about a website that's running WordPress.

Owners of WordPress sites would be wise to try running WPScan against their site, as it may reveal security issues that need patched. It can also reveal more general web server issues, such as directory listings that haven't been turned off inside Apache or NGINX.

WPScan itself is not a tool that can be used maliciously while performing simple scans against a site, unless you consider the extra traffic itself to be malicious. But the information it reveals about a site can be leveraged by attackers to launch an attack. WPScan can also try username and password combinations to try and gain access to a WordPress site. For this reason, it's advised that you only run WPScan against a site that you own or have permission to scan.

In this guide, we'll see how to use WPScan and its various command line options on Kali Linux. Try out some of the examples below to test your own WordPress installation for security vulnerabilities. 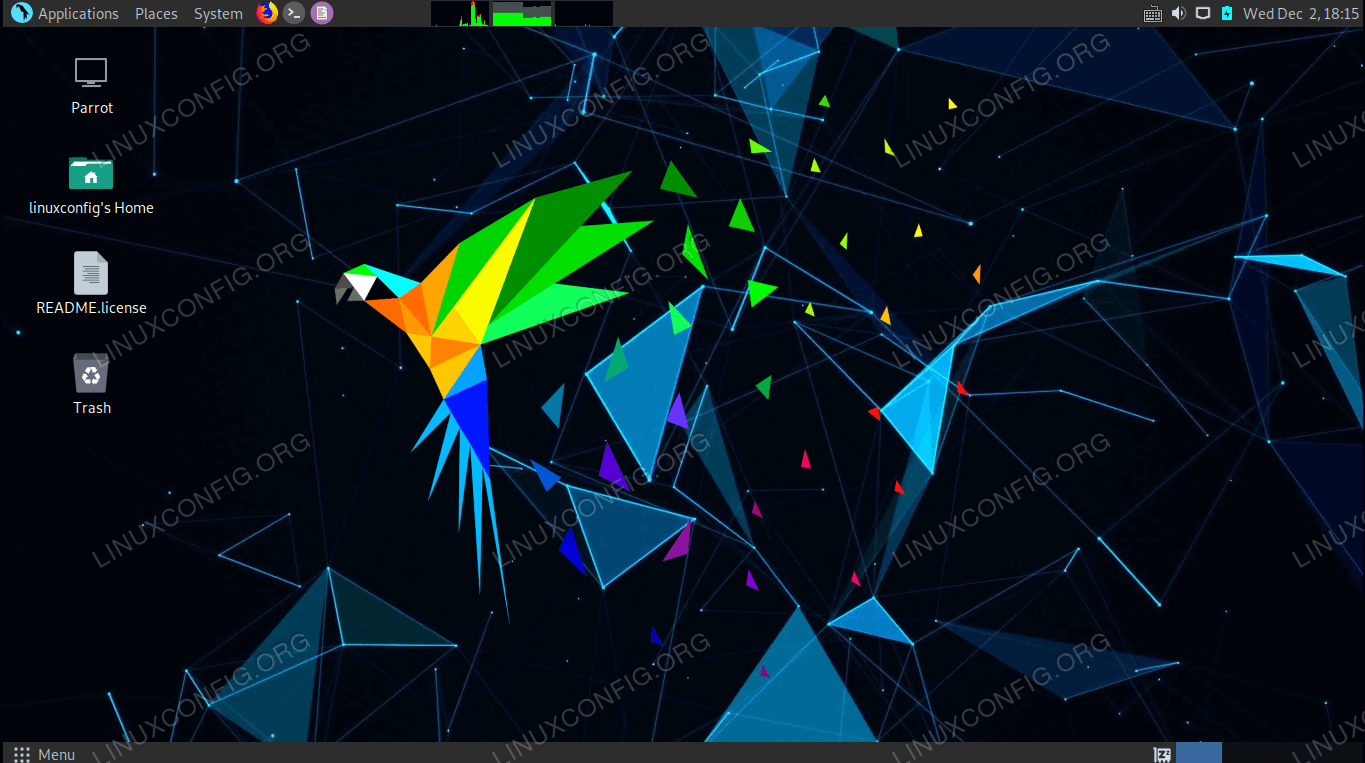 Kali Linux and Parrot OS are two Linux distributions with a huge focus on cybersecurity, privacy, and penetration testing.

Both distributions are based on Debian Linux, naturally making them pretty similar. This fact, along with a big overlap in target audience, causes a lot of newcomers to question the difference between the two distributions.

In this guide, we'll be comparing the two distributions across a few key areas and giving a brief review of both distros. Read on to learn more about Kali Linux and Parrot OS and how they compare. By the end of this article, you'll be armed with enough information to choose the best distro for your needs. 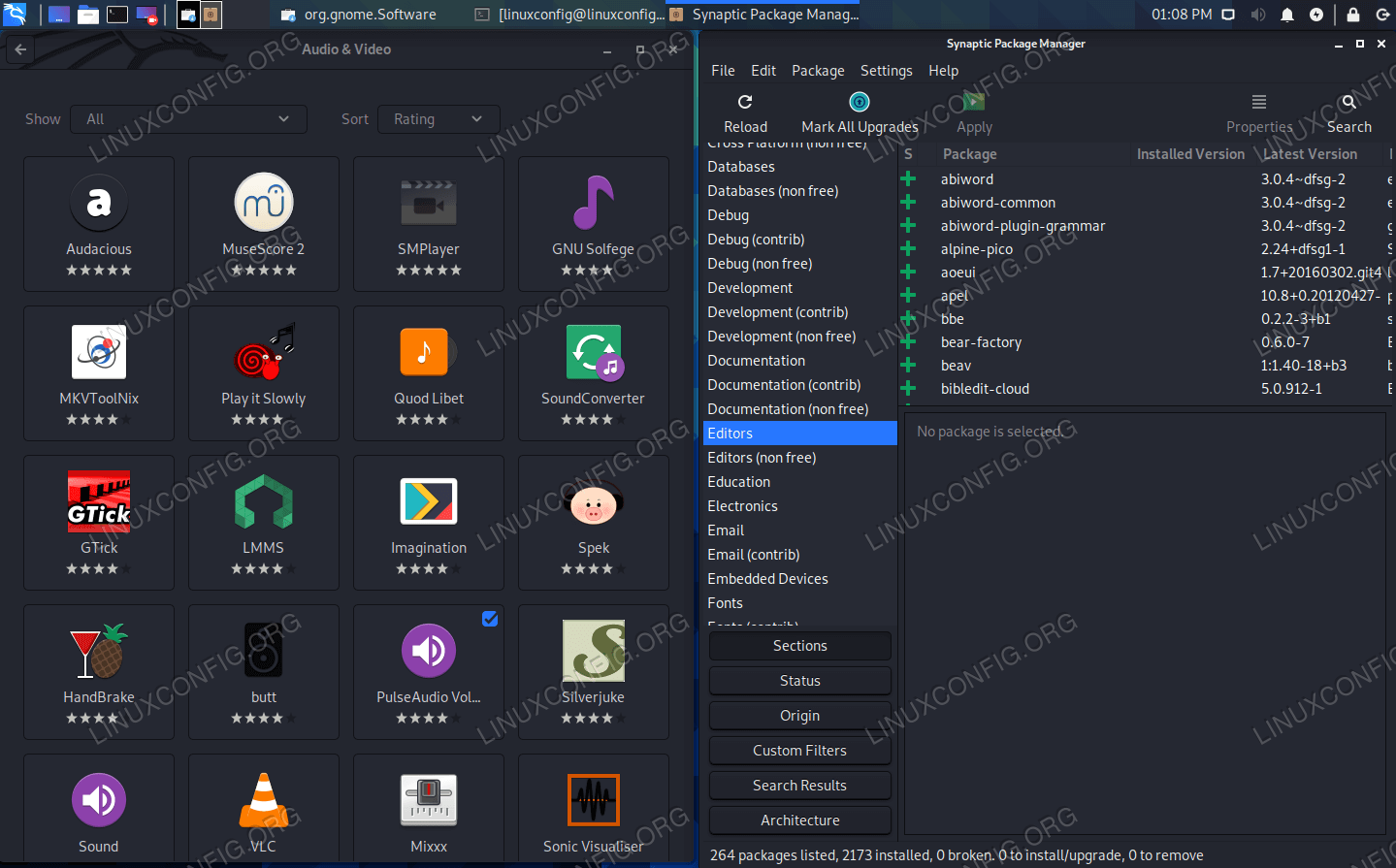 Out of the box, the only option for installing software on Kali Linux is to use the APT package manager from the command line, or download software directly from a developer's website.

This minimal approach can be appreciated, but sometimes it's just more convenient to use a GUI software mananger application to install programs. In this guide, we'll see how to install two different GUI software managers on Kali Linux, which can then be used to search for other software to install. 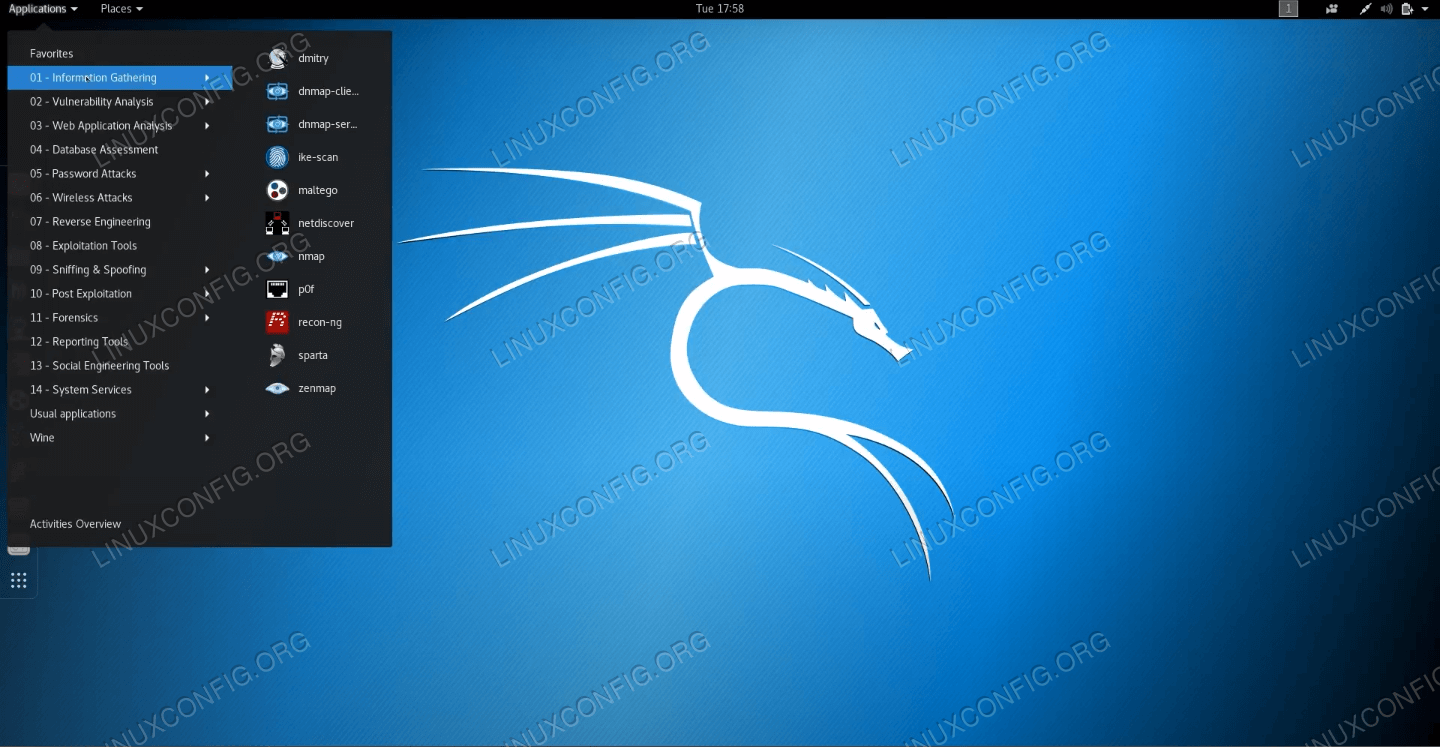 Kali Linux is not your typical Linux distribution. It has a very specific use case, and that is to provide the user with penetration testing and ethical hacking tools. For other most popular Linux distributions please visit our dedicated linux download page.

Under the hood, Kali Linux runs much like Debian, on which it is based. However, Kali should not be used as an ordinary operating system; it has a specific purpose in penetration testing and security auditing and should be used strictly for that. 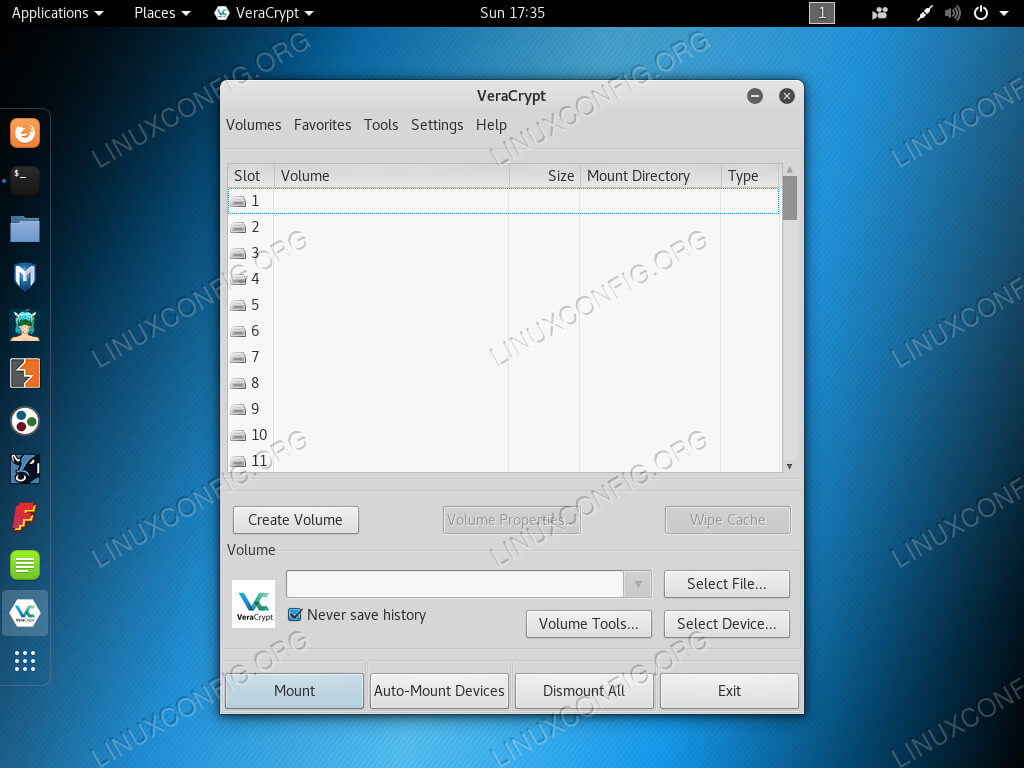 How to install VeraCrypt on Kali Linux

For years, TrueCrypt was the gold standard in encrypting drives across platforms. TrueCrypt is gone now, but VeraCrypt is carrying on its legacy. It looks and works a lot like TrueCrypt did, and it's compatible with TrueCrypt partitions.

Even though VeraCrypt isn't available in Kali's repositories, but that doesn't mean that it's difficult to install. You can download the VeraCrypt installer right from the developers and use it to get set up on Kali.