Steam is easily the most popular PC gaming client, and with hundreds of titles available for Linux, it’s not wonder why Linux gamers would want to install and use it. This is easier on some distributions than others, especially considering that Valve, the company behind Steam, officially targets Ubuntu and Debian.

Fedora users won’t find Steam anywhere in the official Fedora repositories. This is mostly because of Fedora’s strict free software policies. It is available through a reliable third-party repository, though, and it runs great when you get it set up.

Steam for Linux is 32bit only. That may feel like a hassle, but it really isn’t. The only thing that you have to make sure of is that the 32bit version of your graphics driver is installed on your system.

If you are using any of the open source drivers, chances are, 32bit support is already installed and working. If you want to reinstall to be sure run whichever of the following fits your graphics card.

If you are running the Nvidia proprietary drivers, run the following linux command to install 32bit support.

Steam can be found in the popular RPM Fusion community repository. RPM Fusion has been around for a long time and is well known and trusted by the Fedora community. RPM Fusion also provides a short set of commands to install and configure the repository on your Fedora system.

Just answer ‘Yes’ when prompted to ensure that the new repository is installed and configured.

Now that you have the repository installed, you can install Steam like you would any other package on Fedora.

Dnf will pull in Steam along with any other missed dependencies and install them. At that point, you can go ahead and launch the application. 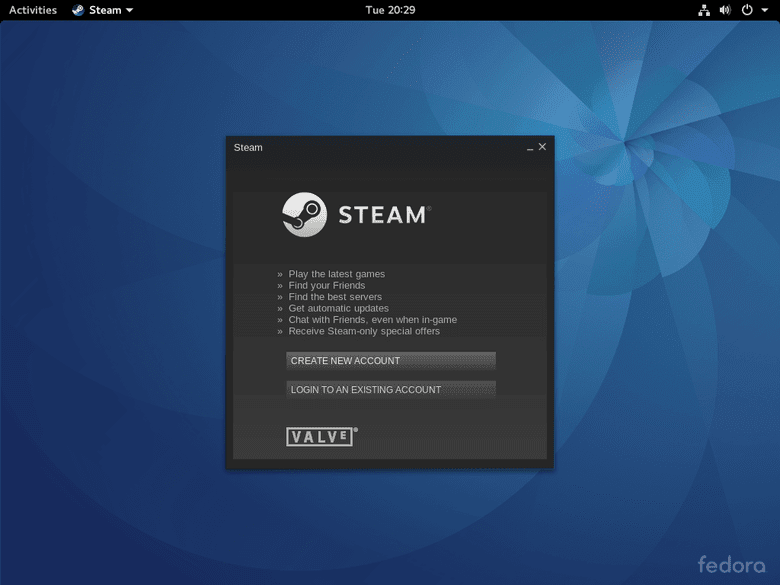 Steam is proprietary software. Because of this, there is a terms of service agreement that you need to accept when you first start it up. If you’re comfortable with this, just accept. If not, why are you trying to run Steam?

After that, you will be asked to create an account or use an existing one. That’s entirely up to you. The prompts are fairly self-explanatory. Just be sure to use a real email address. They do use email verification.

Finally, you will be able to launch Steam and download the games that you want to play!