Lutris is a game manager that can be run on Manjaro and other Linux distributions, and it does its job incredibly well. It has thousands of games in its catalog and works with very little fuss, allowing you to install games from the cloud and keep them up to date. Most games are “one click install” titles, meaning that you shouldn’t have to worry about fiddling with extra configuration to get a Windows game working on Linux. It just works.

You’ll need to have Wine on Manjaro in order to ensure a smooth experience with Lutris. The two work really well together, and that’s because the developers of Lutris also work directly with Wine staging. Since the Lutris developers already program their installers to use the most optimal settings possible, there’s no need to fool around with Winetricks or any of the usual Wine configuration utilities.

If you’ve already installed Manjaro and are ready to start gaming, follow along as we setup Lutris and its dependencies on our system. 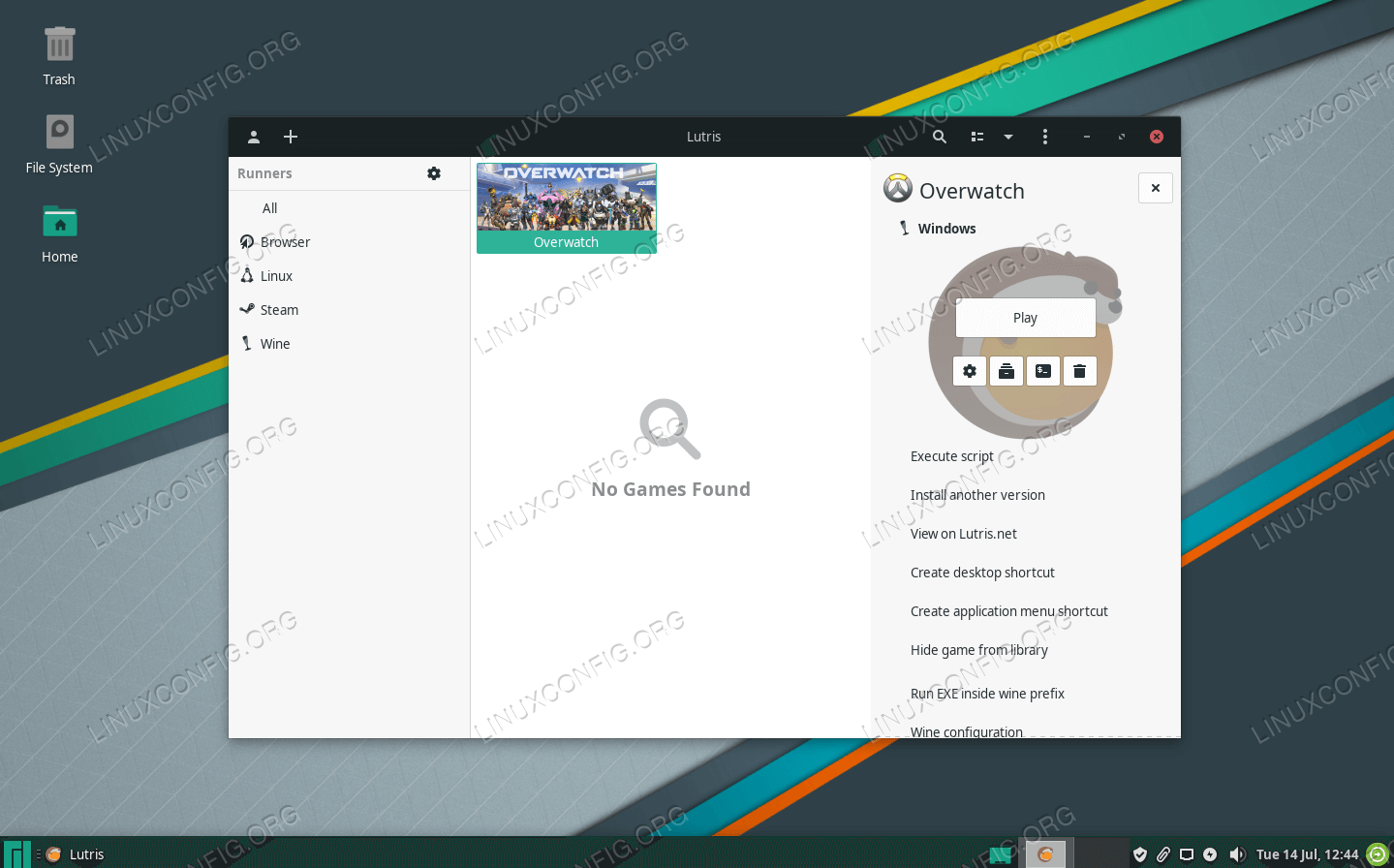 We should have a couple of things on our system before installing Lutris. First, you should make sure that your system has the latest graphics drivers installed. This is especially important for running games smoothly on your computer and could save you a potential headache in the future if you’re trying to troubleshoot why a particular game isn’t running correctly on your system.

Update Manjaro and install Wine along with the Vulkan graphics packages that Lutris recommends by opening a terminal and entering this command:

With Manjaro updated and the dependencies out of the way, we can move on to installing Lutris. Execute the following command in terminal:

Lutris will install, along with a few related packages that Windows based games rely on to run.

You can now open Lutris from Manjaro’s application launcher. The first thing you’ll need to do when it opens up is login. If you don’t already have an account, then you’ll need to create one. Lutris uses accounts to keep track of your game installers. It also allows you to browse their website for games and link them directly to the Lutris app. Click on the upper left icon (pictured below) to login or register. 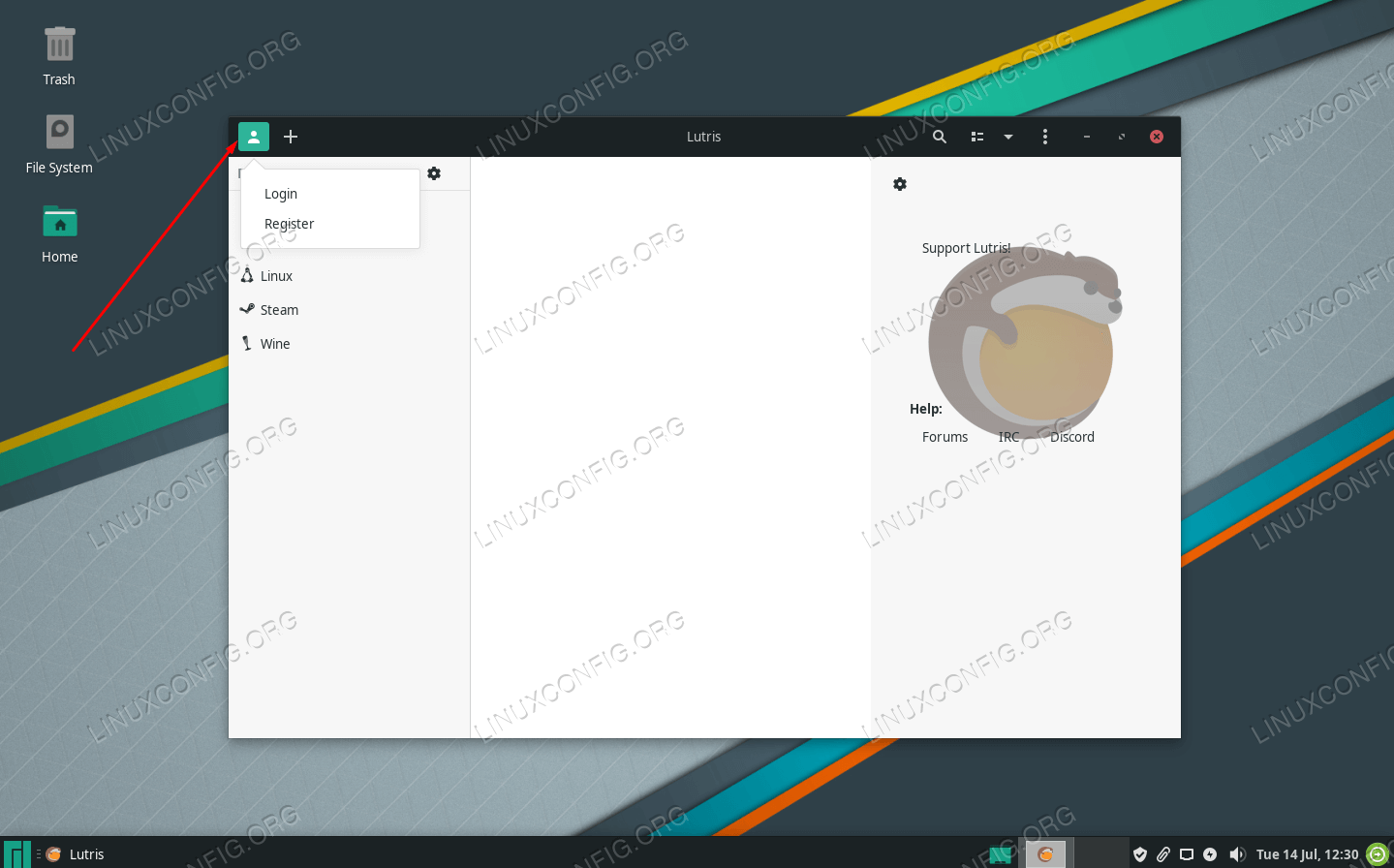 There’s nothing invasive here, you just need to supply a username, email, and password. After your account is created, login with your credentials. 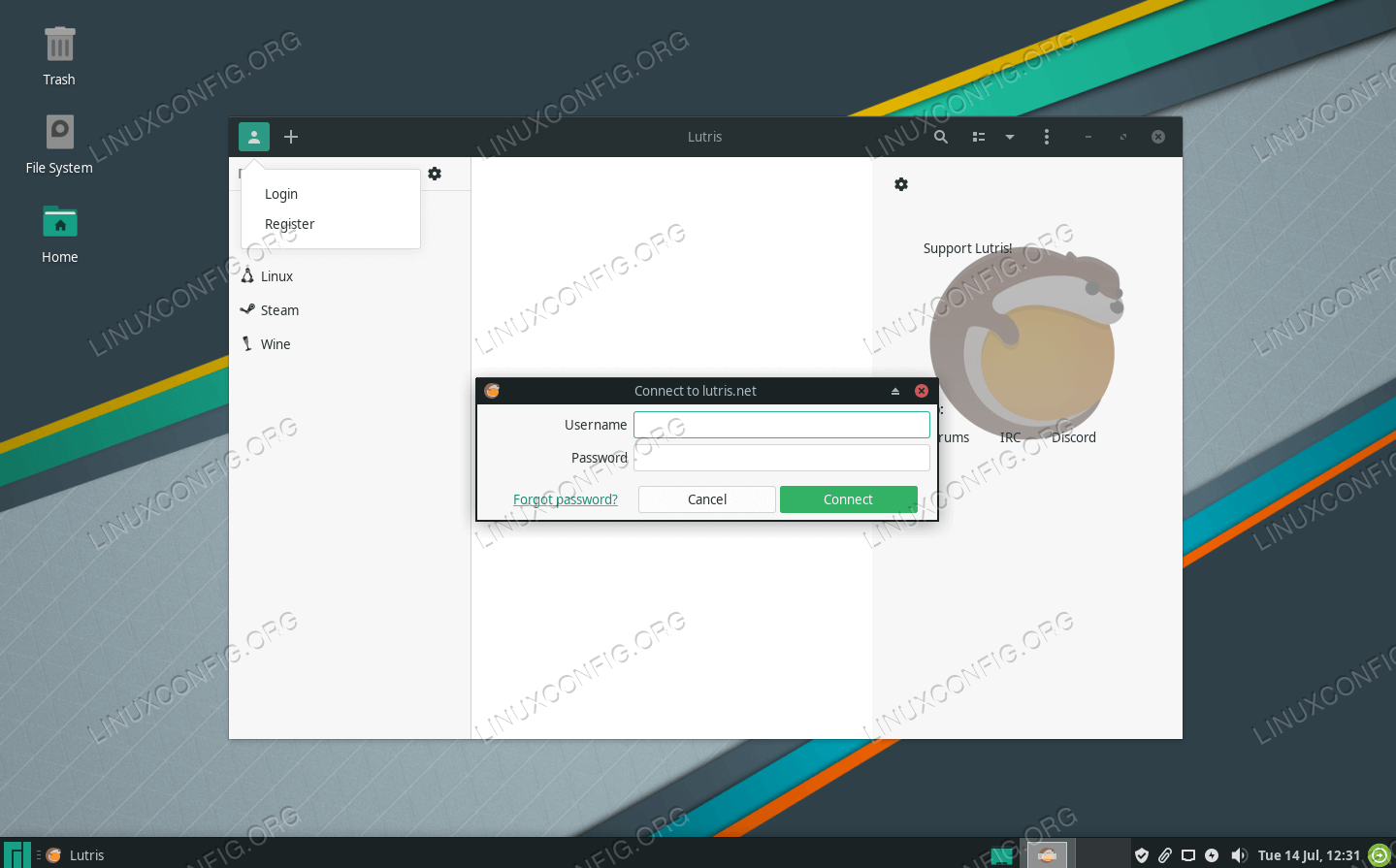 After you’ve logged in, you can begin adding games. Open up Lutris’ website and login with the same username and password. This will allow the site to sync with your installed Lutris application.

Now you can click the ‘Games’ link to begin browsing their game library. Click on any title you’d like, and if you scroll down just a tad, you’ll see the option to install the game. 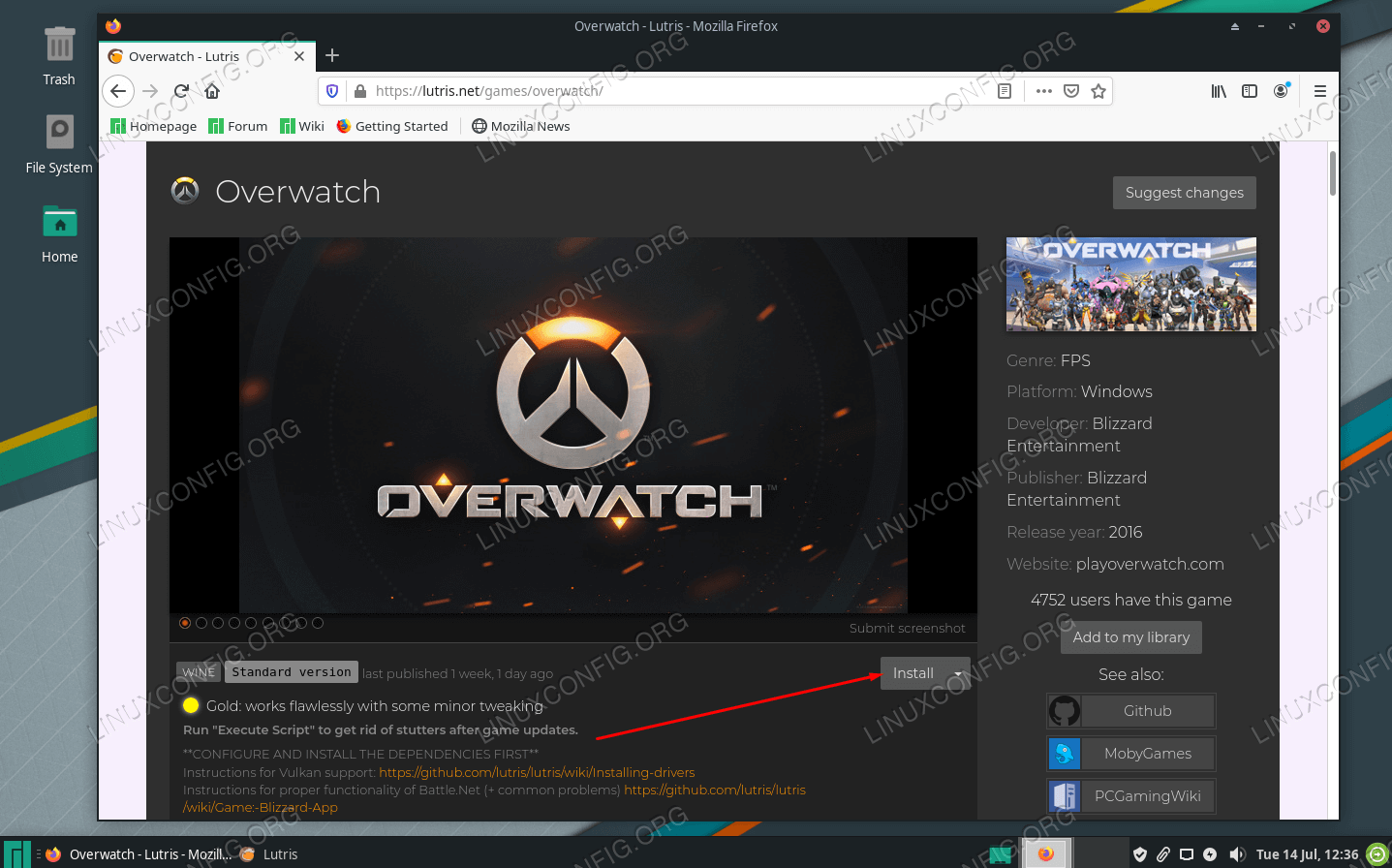 Install any game you want from the Lutris website

Sometimes, you’ll see a few different options for installing a game. Lutris usually rates each installation method (i.e. platinum, gold, etc) based on how well it’s known to work on Linux systems. Be sure to read the accompanying instructions, as sometimes they contain tips on how to get the game running smoothly. Once you find a game you’d like to play, just click “Install.” Your browser should ask you how you’d like to open the link. Select Lutris and open the link. 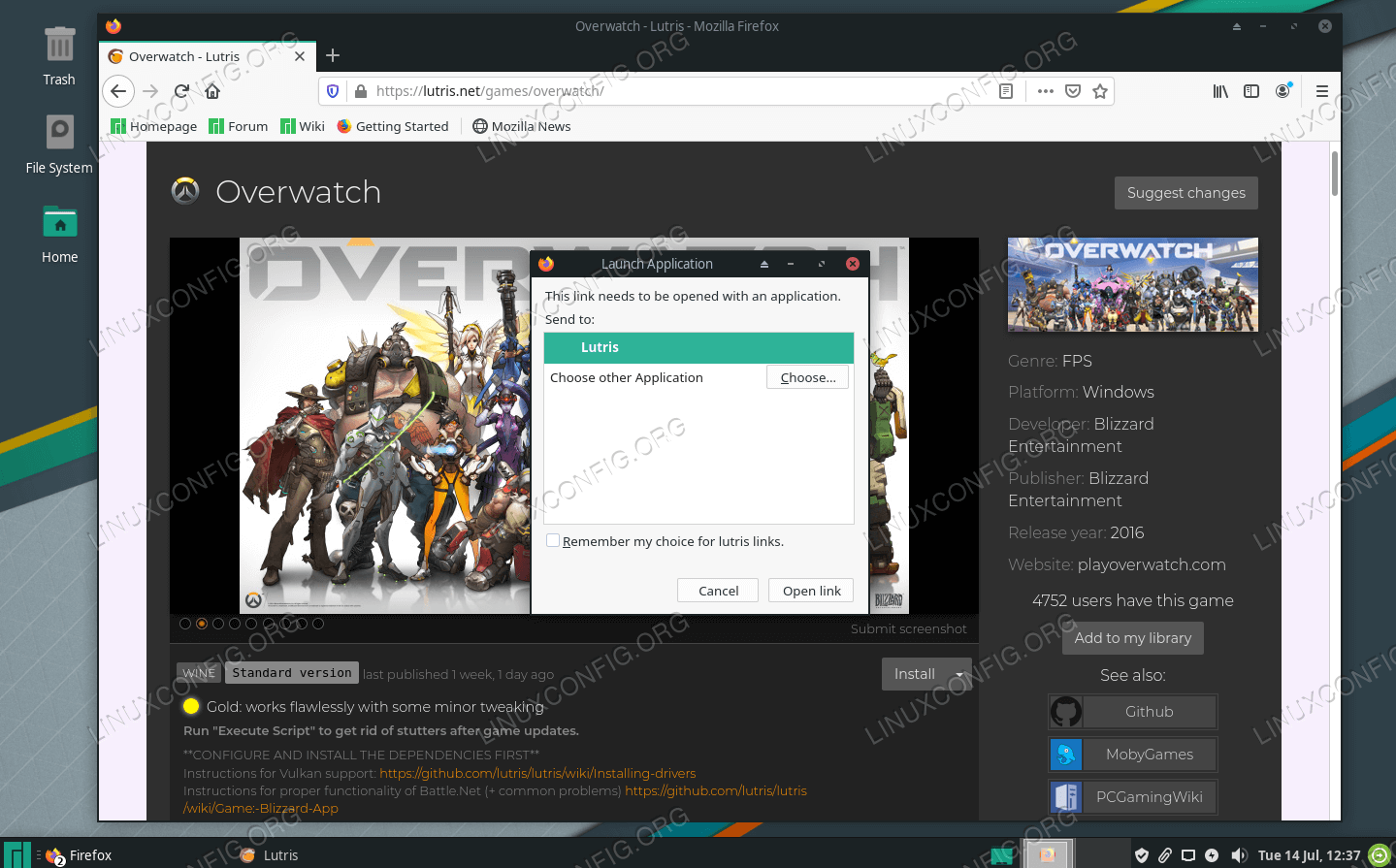 Open the install link with Lutris

Your selected game should then be added to your account’s library and start installing. You will undoubtedly need to click through a few installation prompts as Lutris goes about installing the required dependencies and downloading the game content. 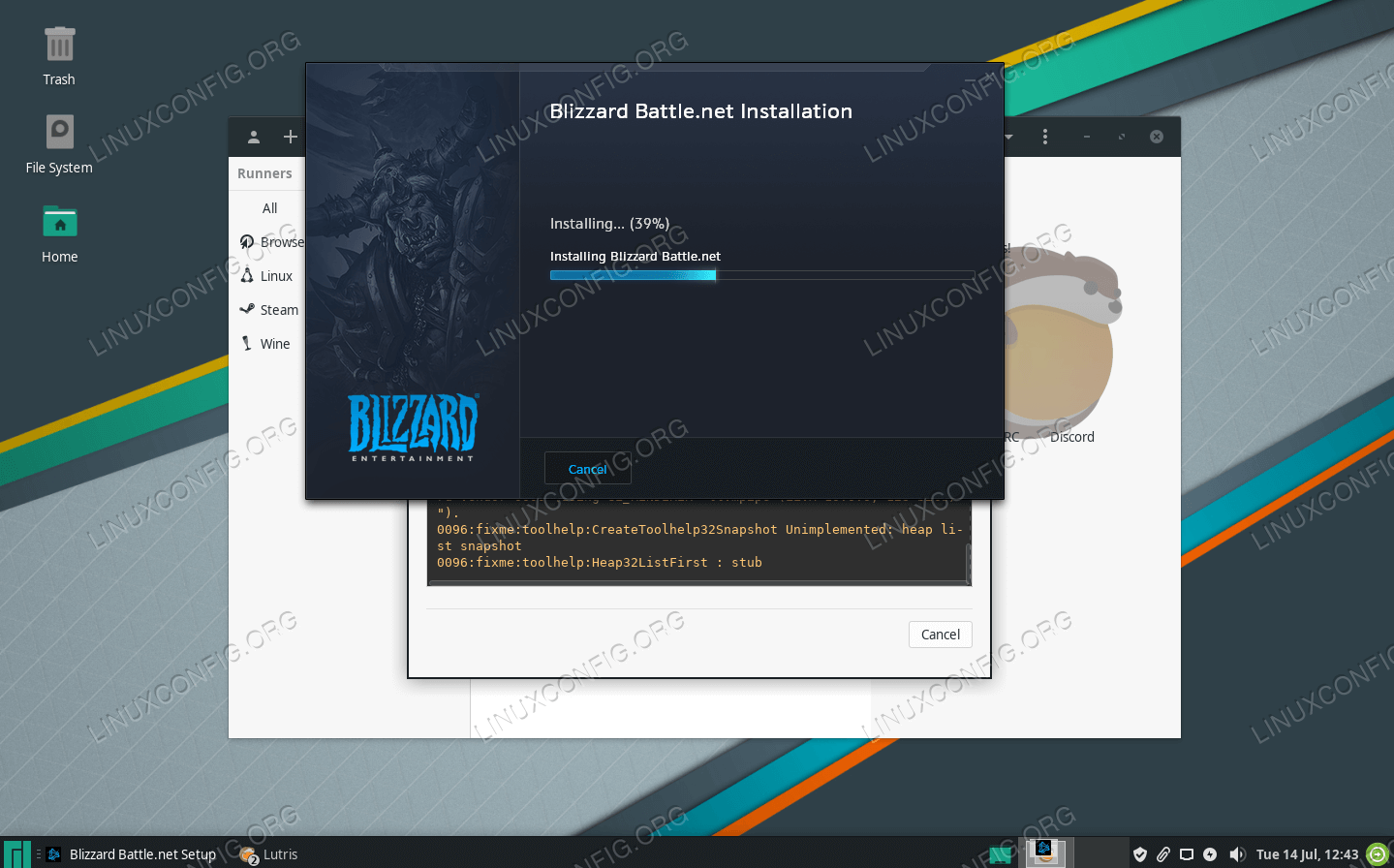 The game (Overwatch in our example) will be installed via Lutris

Eventually, Lutris will notify you that it has finished installing your game. Now you’ll see the game available for selection inside the Lutris app.

All of your installed games will appear in this menu

Lutris provides a great solution for gaming on Linux because it takes a lot of the guesswork out of the equation. Sure, a lot of these titles would run fine without Lutris, but you’d likely be poking around for hours trying configure all the necessary components to get them running as smoothly as Lutris does.

Lutris is a great way to manage your games on Manjaro because it runs off the limitless feedback from the Linux gaming community to get these titles working how they’re intended to.

Keep in mind that Lutris comes packed with quite a few emulators, or “runners” as they’re called inside Lutris. Access them by clicking the cog icon next to “Runners” on Lutris app’s interface. It’s also worth noting that Lutris integrates with Steam games and Battle.net games, and even ordinary Linux desktop games. You can connect Lutris to your other game libraries through the menus (click the plus sign in the upper left corner). For any other titles, just browse for them on the Lutris website to get them added to your app.