When we decide to install an operating system based on the Linux kernel, the first thing we do is to download its installation image, or ISO, from the official distribution website. Before proceeding with the actual installation, however, it is crucial to verify the integrity of the image, to be sure it is what it claims to be, and nobody has compromised it. In this tutorial we will see the basic steps we can follow to accomplish this task. 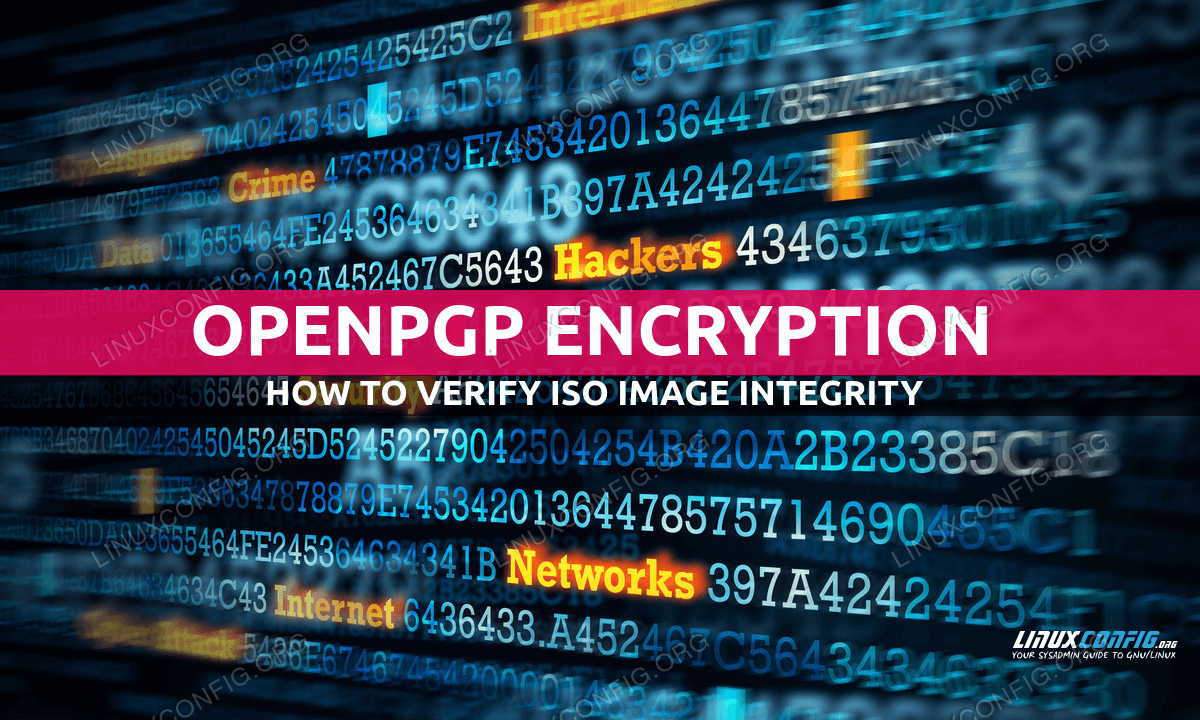 HOW TO VERIFY ISO IMAGE INTEGRITY

The steps involved in checking the integrity of a downloaded ISO are basically two:

Here we will see how to perform both steps.

Verifying the gpg signature of the checksum file

To be sure an ISO we downloaded was not altered, there is one simple thing to do: check that its checksum corresponds to the one indicated in the file which is usually available in the same page the ISO was downloaded from. There is only one problem: how can we be sure that this file itself has not been altered? We must check its gpg signature! By the way, what is a gpg signature and what is the difference between signing and encrypting with gpg?

Gpg encryption is based on the use of key pairs. Each user generates a private and a public key: the former, as its name suggests, is strictly personal, and must be kept as safe as possible; the latter, instead, can be distributed and freely accessed by the public. There are basically two things we can do with gpg: encrypting and signing.

Let’s say we have two persons: Alice and Bob. If they want to benefit from the use of gpg, the first thing they must do is to exchange their public keys.

If Alice wants to send a private message to Bob, and wants to be sure that only Bob is able to read the message, she must encrypt it with Bob’s public key. Once the message is encrypted only Bob’s private key will be able to decrypt it.

That is gpg encryption; the other thing we can do with gpg is to create a digital signature. Suppose Alice wants to distribute a public message this time: everyone should be able to read it, but a method is needed to verify that the message is authentic and was really written by Alice. In this case Alice should use its private key to generate a digital signature; To verify Alice’s signature, Bob, (or any other person) uses Alice’s public key.

When we download an ISO from an official site we should also download, to verify it we should also download the corresponding checksum file and its signature. Let’s make a real-world example. Suppose we want to download and verify the ISO of the latest version of Ubuntu (20.04). We navigate to the release page and scroll to the bottom of the page; there we will find the list of files that can be downloaded: 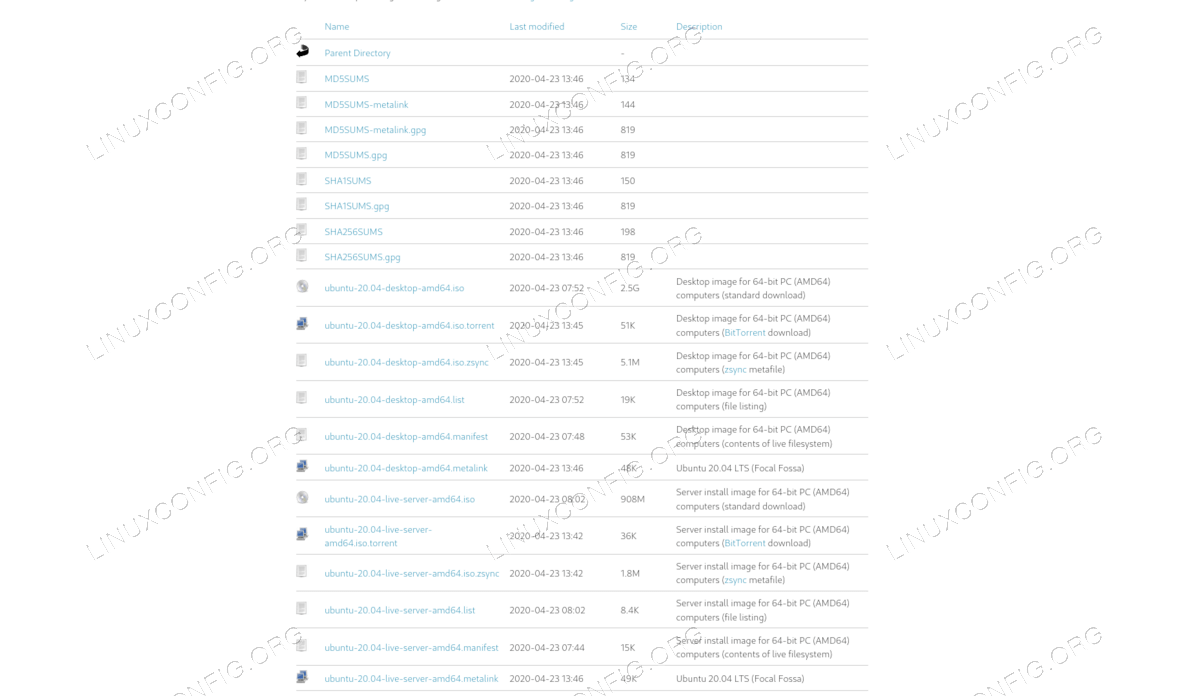 Supposing we want to verify and install the “Desktop” version of the distribution, we should grab the following files:

Once we downloaded all the files, the first thing we need to do is to verify the gpg signature of the checksum file. To do that, we must use the following command:

When more than one argument is provided to the gpg --verify command, the first one is assumed to be the file which contains the signature and the other ones to contain the signed data, which in this case is the checksum of the Ubuntu image. If the distribution we are currently working from is not Ubuntu, and it is the first time we check an Ubuntu image, the command should return the following result:

The message is clear: gpg cannot verify the signature because we don’t have the public key associated with the private key that was used to sign data. Where we can get the key? The easiest way is to download it from a keyserver: in this case we will use keyserver.ubuntu.com. To download the key and import it in our keyring we can run:

Let’s take a moment to explain the command above. With the –keyserver option, we specified the keyserver we want to use; the –recv-keys option, instead, takes a key-id as argument, and is needed to reference the key that should be imported from the keyserver. In this case the id of the key we want to search and import is D94AA3F0EFE21092. The command should produce this output:

We can verify the key is now in our keyring by launching the following command:

We should easily find the entry relative to the imported key:

Now that we imported the public key, we can re-attempt to verify the SHA256SUM signature:

This time, as expected, the command succeeded, and we were notified of a good signature:

Reading the above output, a question would almost certainly arise: what does the “There is no indication that the signature belongs to the owner” message mean? The message appears because even if we imported the key in our keyring, we have not declared it as trusted, and there is no actual proof that it belongs to the specified owner. To get rid of the message we must declare that we trust the key; how we can be sure it is actually to be trusted? There are two ways:

Furthermore, there are multiple levels of trust we can assign to a key; if you are interested in this subject (you definitely should be!), and want to know more about it, the GNU Privacy Handbook is a good source of information.

Now that we verified that the SHA256SUM signature is ok, we can actually proceed and verify that the checksum of the downloaded image, corresponds to the one actually stored in the file, which has the following content:

As you can see on each line of the file we have a checksum associated with an image. Assuming the SHA256SUM file is located in the same directory where the Ubuntu 20.04 image was downloaded, to verify the ISO integrity, all we have to do is to run the following command:

sha256sum is the program used to compute and also check SHA256 message digest. In this case we launched it using the -c option, which is the short for --check. When this option is used, it instructs the program to read the checksums stored in the file passed as argument (in this case SHA256SUM) and verify it for the associated entry. The output of the command above, in this case, is the following:

From the output we can see that the ubuntu-20.04-desktop-amd64.iso ISO has been verified, and its checksum corresponds to the one indicated in the file. We are also notified that was impossible to read and verify the checksum of the ubuntu-20.04-live-server-amd64.iso image: this makes sense, since we never downloaded it.

In this tutorial we learned how to verify a downloaded ISO: we learned how to check that its checksum corresponds to the one provided in the checksum file, and how to check the gpg signature of the latter is good. To check a gpg signature we need the public key corresponding to the private one that generated it: in the tutorial we also saw how to download a public key from a keyserver, by specifying its ID.