Learning how to use the partclone utility to backup a partition

If you ever used Clonezilla to create a backup of your operating system, you have already experienced the power of the partclone. Unlike other tools like dd, partclone knows how to interact with specific filesystems, therefore it can create much smaller backups, cloning only the used space in the partition. In this tutorial we will learn how to use partclone from command line.

A backup can happen at file level, or at a deeper block level. The former is the level at which partclone operates. We all know and love dd, but one of the characteristics that make this programs great in some situations, represents also a weakness in other ones: dd knows nothing about filesystems. The program just replicates each block of a disk or partition, creating a 1:1 perfect clone (a 160GiB disk, will produce a 160Gib backup). Partclone behavior is different, since it can smartly interact with the most common filesystem types, backing up only the used blocks of a partition, obtaining much smaller backups.

The fact that partclone operates at block level gives us the advantage of not having to worry about preserving specific file permissions like acls or selinux labels.

Partclone supports all the most used filesystems like: ext2, ext3, ext4, hfs+, reiserfs, xfs, jfs, ntfs, fat(12/16/32), exfat, etc. The filesystem to backup will determine the suffix to use with the program, following the syntax partclone.<fileystem_type> utility. For example, to backup an ext2 filesytem, we will use the parclone.ext2 command. Furthermore, if some specific filesystem is not supported by partclone, partclone.dd can be used.

Partclone should be availble in the most common distributions repositories. To install it in Ubuntu or Debian, we can use apt:

To install it on Fedora:

On CentOS and Rhel we should first enable the EPEL software source (Extra Package for Enterprise Linux). CentOS has the epel-release package available in the official repositories, therefore to enable this software source, we just have to run:

Enabling the EPEL repository on Rhel requires an extra step. First we have to download the epel-release package from the project page, then we should install the retrieved package:

After the repository is enabled, we just need to use yum to install the partclone package:

On Archlinux, we can install partclone via pacman:

Enough words, let’s see partclone in action. First and foremost, we must remember that to clone a partition, it must not be mounted. Therefore if you want to backup a system partition, you must access the drive from a live cd (this is what clonezilla does). If you use an lvm partitioned system, we are not subject to this restriction, since we can create a live snapshot of a logical volume and run partclone on it, preserving uptime.

I’m going to backup a snapshot made from the logical volume I use as /home partition. It is formatted with an ext4 filesystem and it’s called home_snap_lv. All we have to run is:

Let’s analize the command. First we run partclone with the extension related to the filesystem we are interested in, ext4. Then we provided the -c option. This let us specify that the action we want to do is to clone (partclone can also be used to restore a backup). The -s option let us specify the source we want to clone (in this case the logical volume snapshot home_snap_lv). Finally the -o option, short for --output, tells partclone where we want to store the backup image. Notice that the .pcl extension here is completely arbitrary: we just use it for convenience.

Once launched, partclone will display the progress of the operation:

However, it’s also possible to represent those information “graphically”, using ncurses (this is what clonezilla does). All we need to do, is to add the -N option. Running:

Will produce the following output: 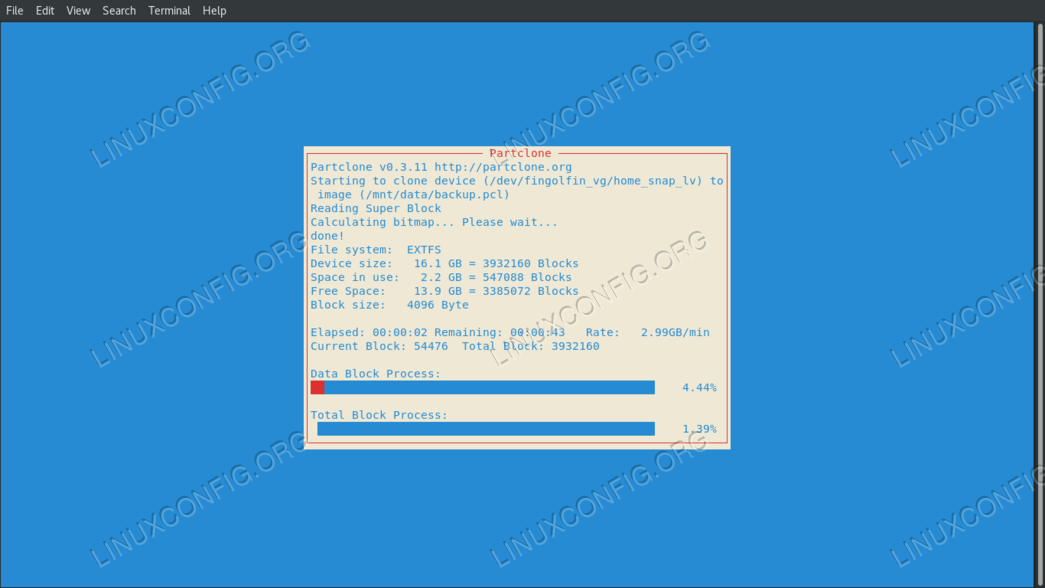 As said before, partclone only backups the used block on a filesystem, optimizing the space needed to store the backup. However, thanks to the power of shell redirections, we can combine partclone with gzip to produce a smaller backup image on the fly:

This time we didn’t use the -o option to specify the output file. Instead, we piped the standard output of the program to gzip standard input. We also specified the -c option, short for --stdout, which let us modify gzip behavior in order to compress or decompress to stdout. The compression level to be used is set with the -9 option, the maximum available. Default compression rate is -6. Alternatively --fast can be used to use the fastest compression, favoring speed against efficiency, or, vice versa, --best for the opposite behavior, obtaining the smallest file.

Finally we used the > operator, to redirect the output to our desired destination file. You can notice that I have added a .gz prefix to it: this is also completely optional, and done just for convention.

Partclone can also be used to restore a previously made backup on an existing partition. The only limitation is that the partition must be of the same size or bigger than the original one.

Restoring a backup is very easy. Say for example we want to restore the previously made backup (again the partition must be unmounted):

In case we used gzip to compress partlcone output, the command to restore the backup changes a little. We have to decompress the package and restore it on the fly, again using the power the shell:

The -c switch, is again used to decompress to stdout, decompression specified as the action by using the -d option, passing the name of the compressed file as the argument. The output is then piped to partclone stdin and restored to the original partition. The same result of the above command can be obtained by using the zcat program:

Partclone is the core program used by clonezilla and a very nice tool to obtain a “smart” backup of a filesystem, considering only the used blocks. Combining it with lvm partitioning, one can obtain a backup of a partition without having to reboot the system. Please refer to its manpage for further information about this really useful program.