In this guide, we’ll be showing you how to take screenshots in Ubuntu 20.04 Focal Fossa. There are a few different utilities we can use to accomplish this task, and this article will ensure that you’re familiar with them. 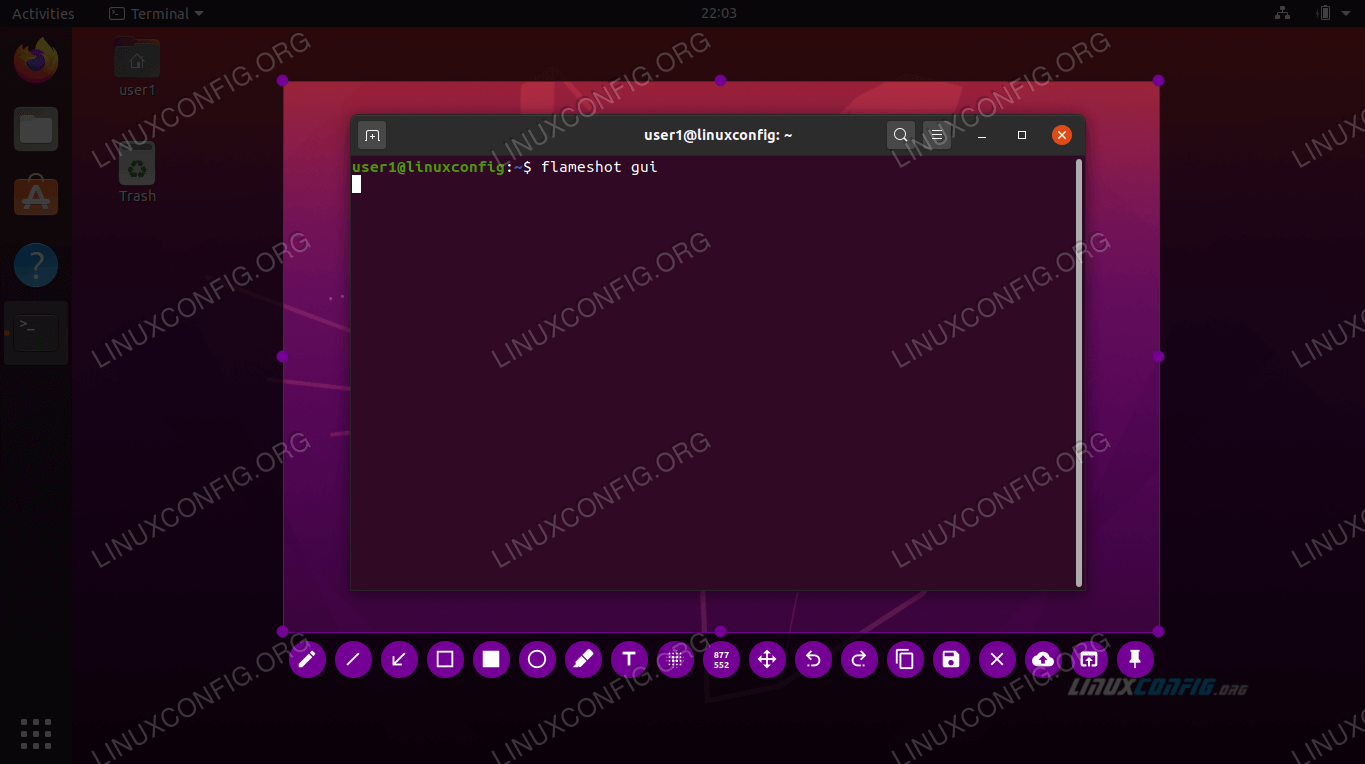 Taking a screenshot in Ubuntu 20.04

On Gnome desktop, the default screenshot application is simply called screenshot. The utility is running in the background by default and listening for PrtSc keystrokes. Pressing the PrtSc (print screen) button on your keyboard will tell the program to take a picture of your screen and save the image to the Pictures folder inside your home directory.

You’ll hear a camera shutter sound and your screen will flash. This is the screenshot program notifying you that it just captured a screenshot. Open up your Pictures folder to view it. 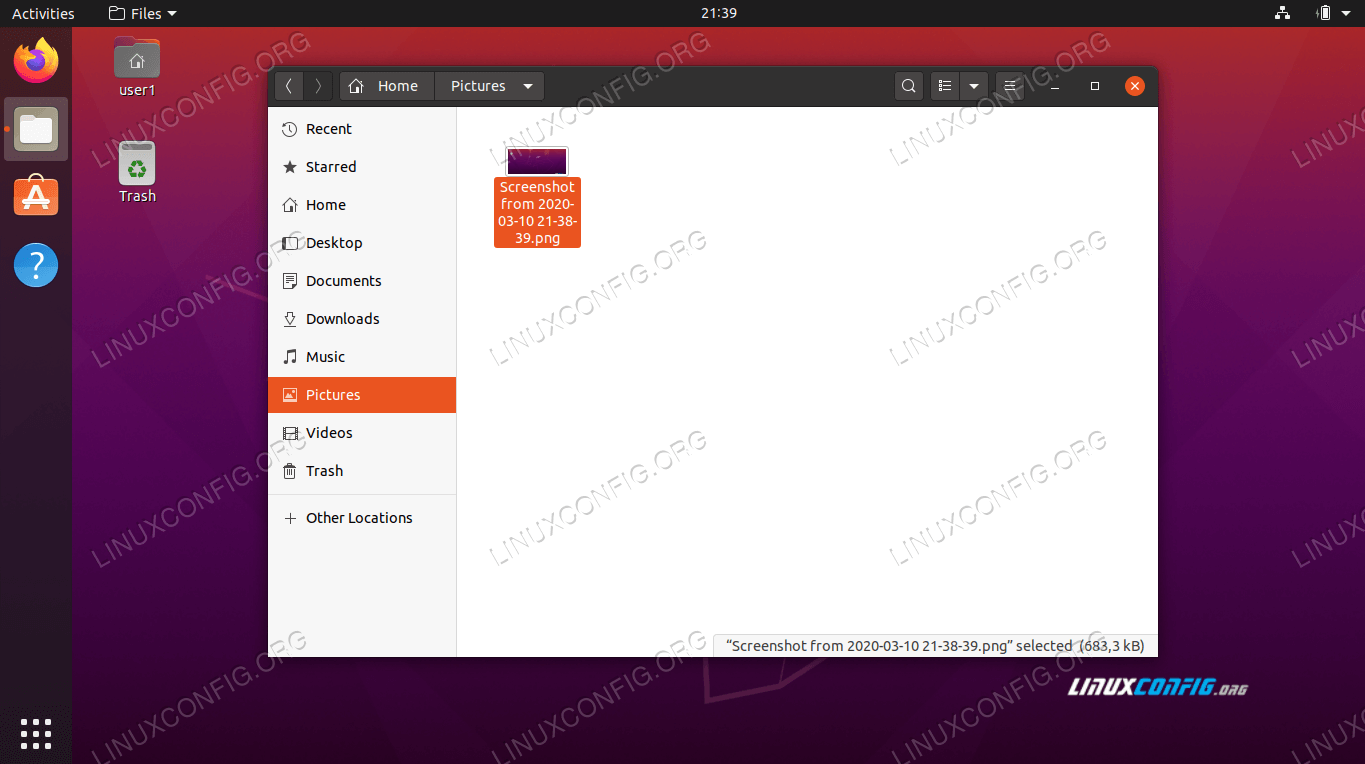 Screenshots are stored in the Pictures folder

Keep in mind that this will always take a screenshot of your entire desktop. If you’d rather take a picture of a particular window, you can highlight that window and then press Alt + PrtSc on your keyboard at the same time.

If you’d like to select a certain area of your screen to capture, and the Alt + PrtSc keyboard combo isn’t offering you enough fine tuned control, you can open the screenshot utility from inside Ubuntu’s Applications menu. 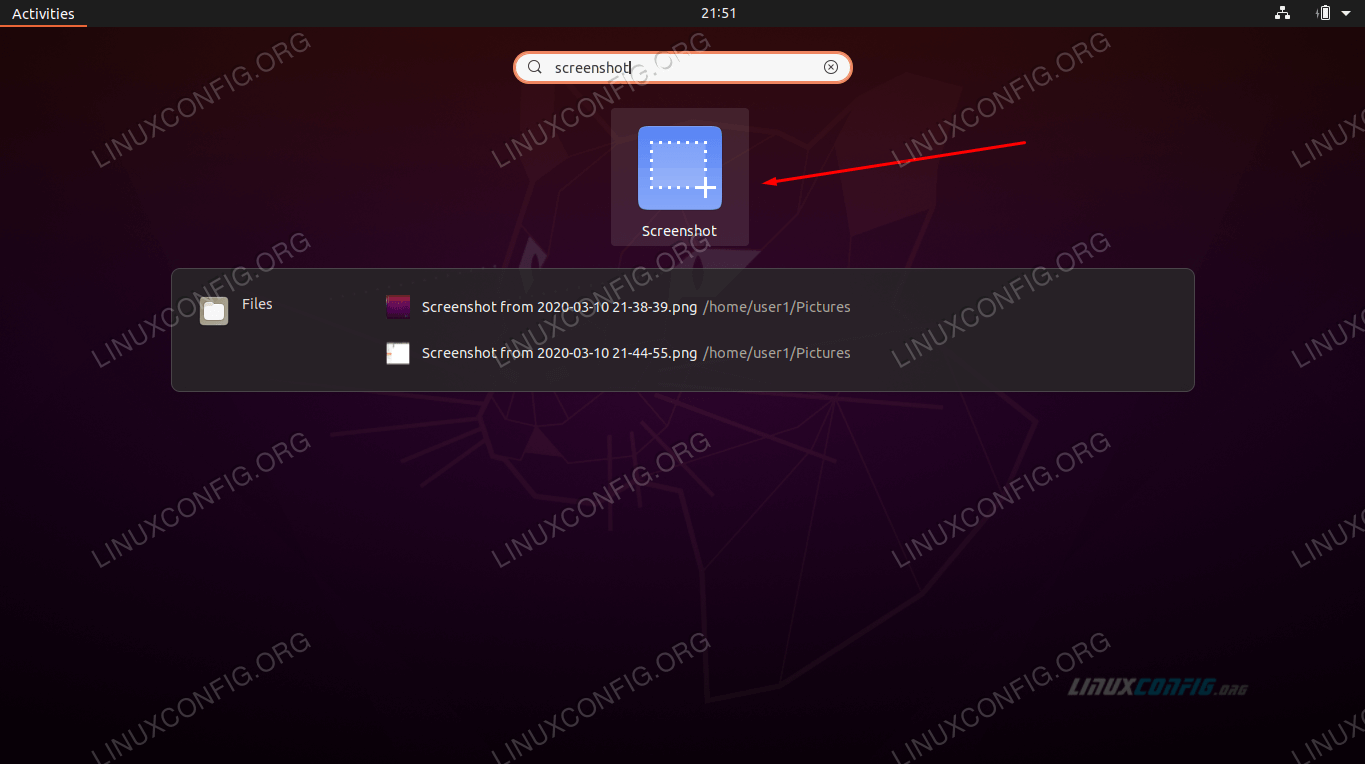 In the screenshot window, click on “Select area to grab” and then “Take Screenshot.” You’ll be able to select an area to capture by dragging your mouse before saving the image. 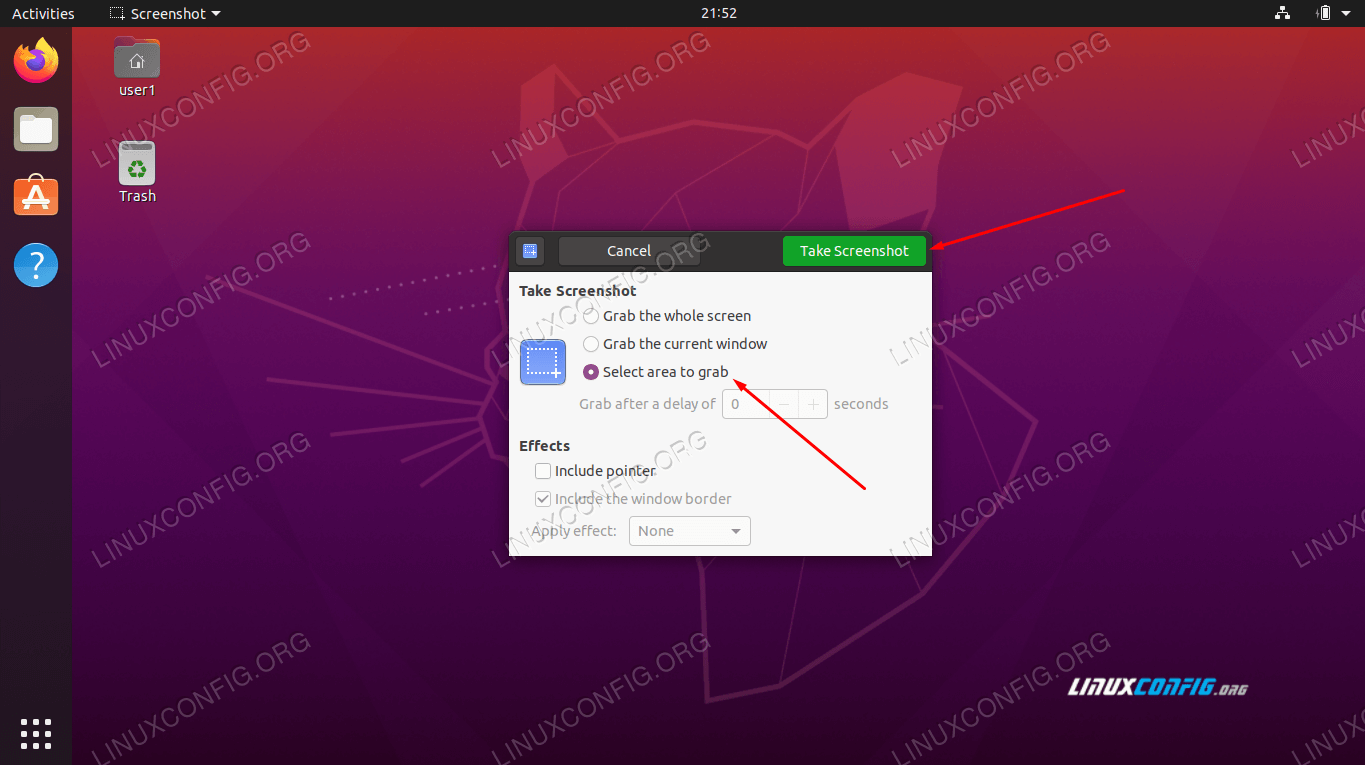 Select area to grab and then take screenshot

The default screenshot utility that we covered above is a bit sparse in the way of features. Flameshot is an alternative program that you can use, especially if you’re looking to annotate your screenshots by drawing arrows on them and have access to other convenient features.

Flameshot is not installed by default, so open up a terminal and type the following command to install it:

Once Flameshot is installed, you can access it in the Applications launcher. Alternatively, you can launch it from the terminal with this command: 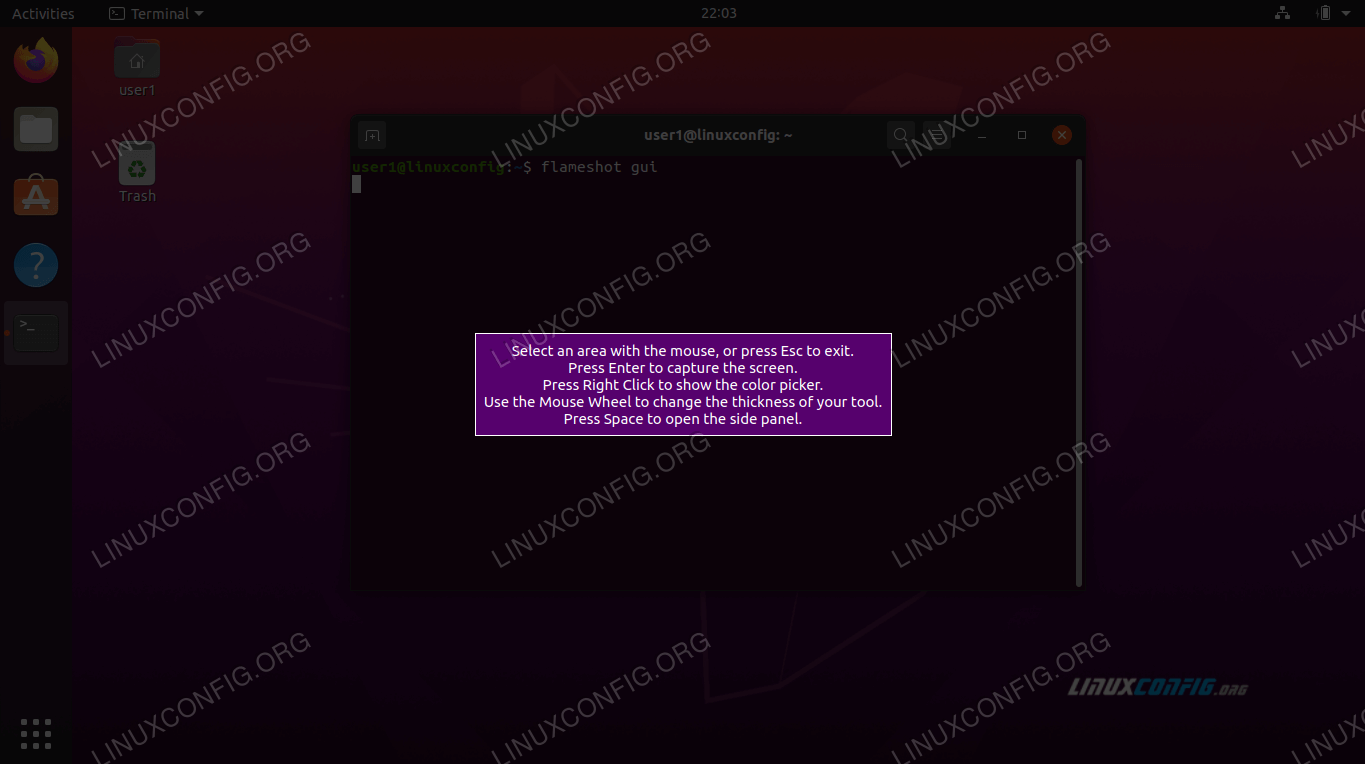 When Flameshot opens, just follow the on-screen instructions. You can drag your mouse around and resize the window very easily in order to capture exactly what you want on your screen. You’ll see lots of tools that you can use to annotate or upload your screenshot.

Taking a screenshot with flameshot

But wait, there’s more! You can configure Flameshot’s interface and other options inside the configuration menu: 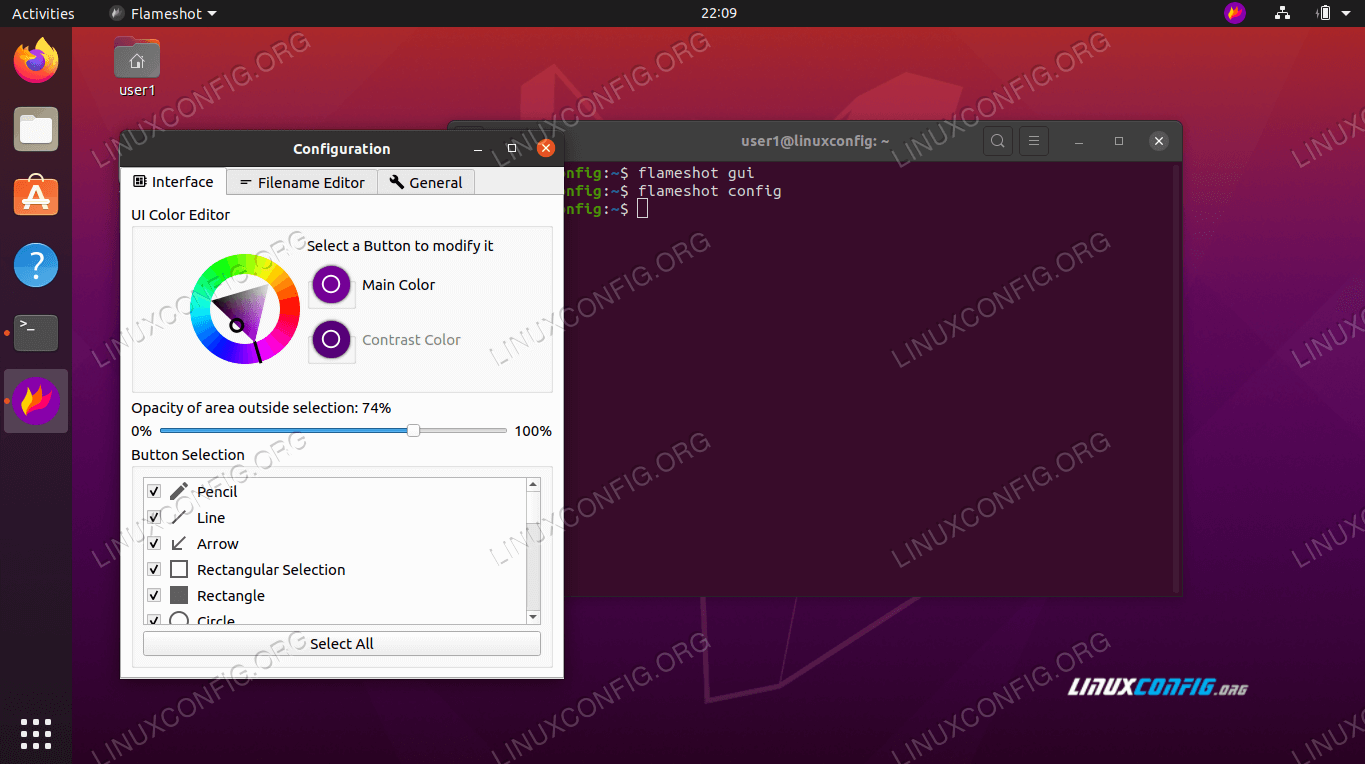 There are some command line options you can use with Flameshot as well. See the man page for a full list of what it can do.

Spectacle is another screenshot alternative. It’s the default screenshot utility for KDE Plasma desktop environment, but you’ll likely have to install it if you’re using GNOME. If you don’t already have it, open a terminal and type the following command:

Once it’s installed, you’ll find Spectacle inside the Applications window. 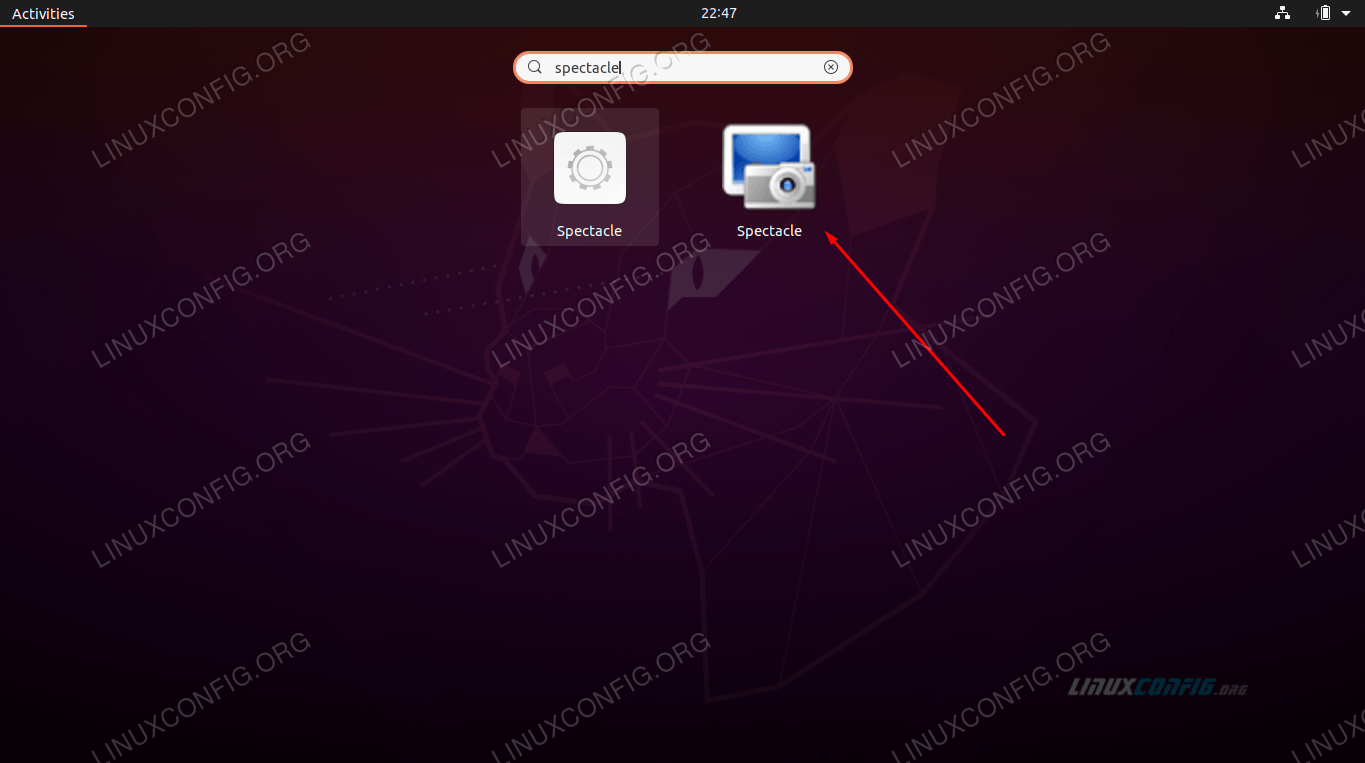 Spectacle is pretty minimal, but contains some really handy options – like the ability to capture the desktop only on certain monitors.

Kazam is another viable option for screenshots on Ubuntu 20.04. You can install it by opening a terminal and typing this command:

Pull it up in the Applications window when you’re ready to launch it. 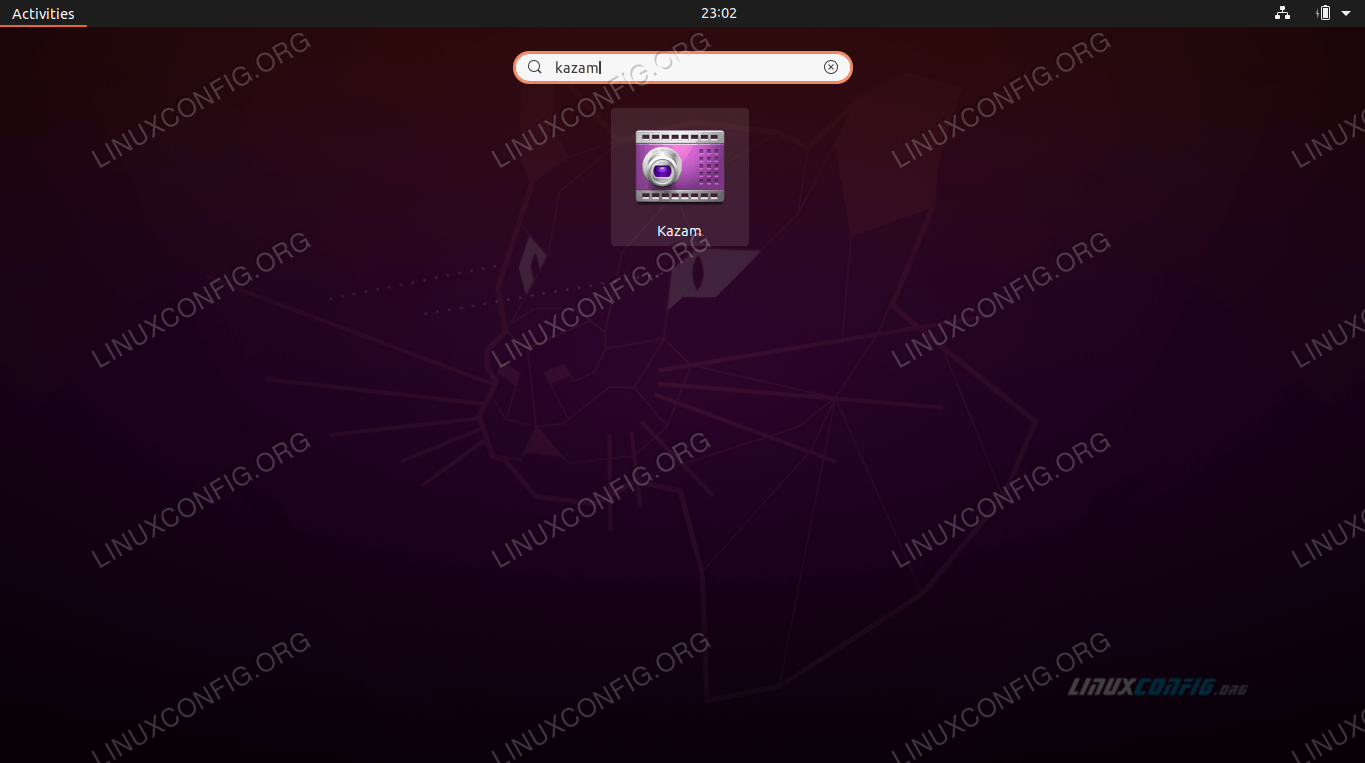 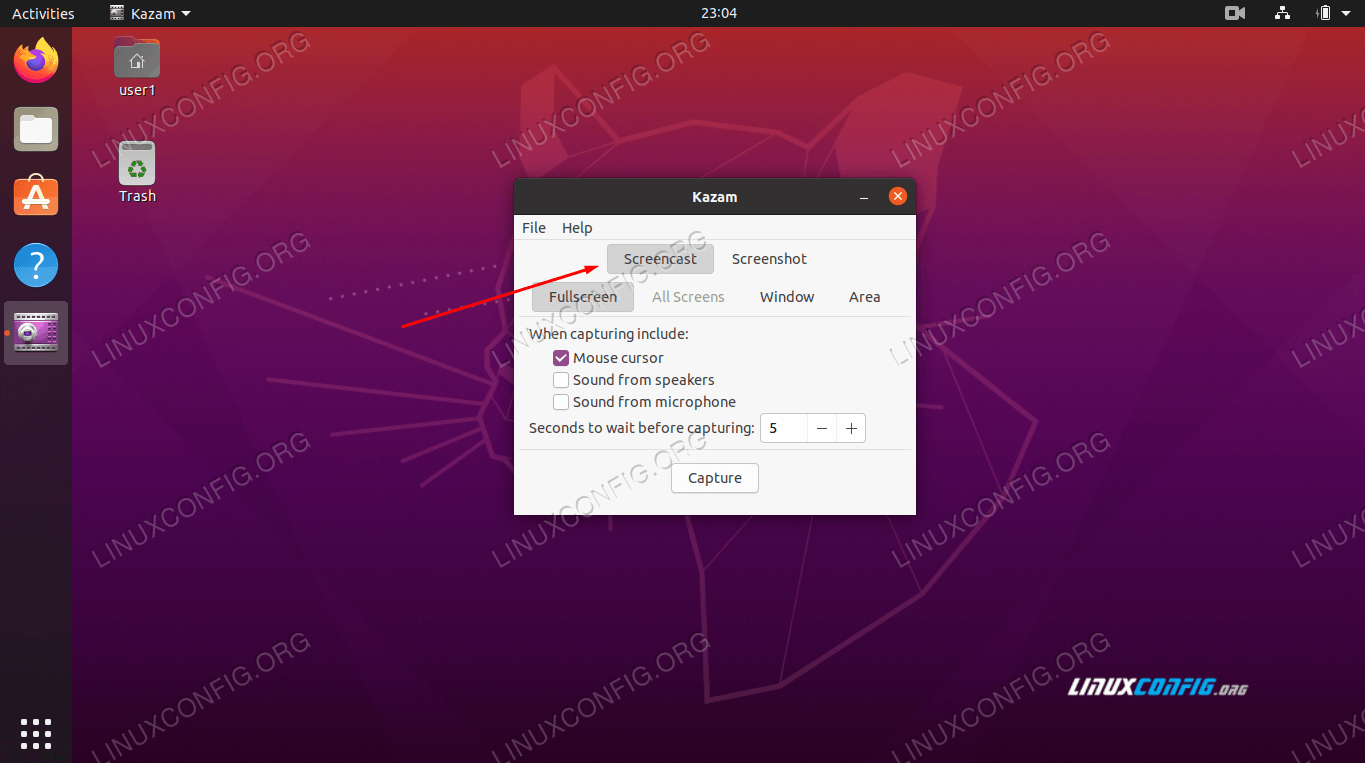 Select screencast to take a video

The import command is a great way to take screenshots directly from the command line. You’ll first need to install the imagemagick package in order to access the import command:

There are a lot of options you can pass to the command, but in its most basic form, you can just run it like so: 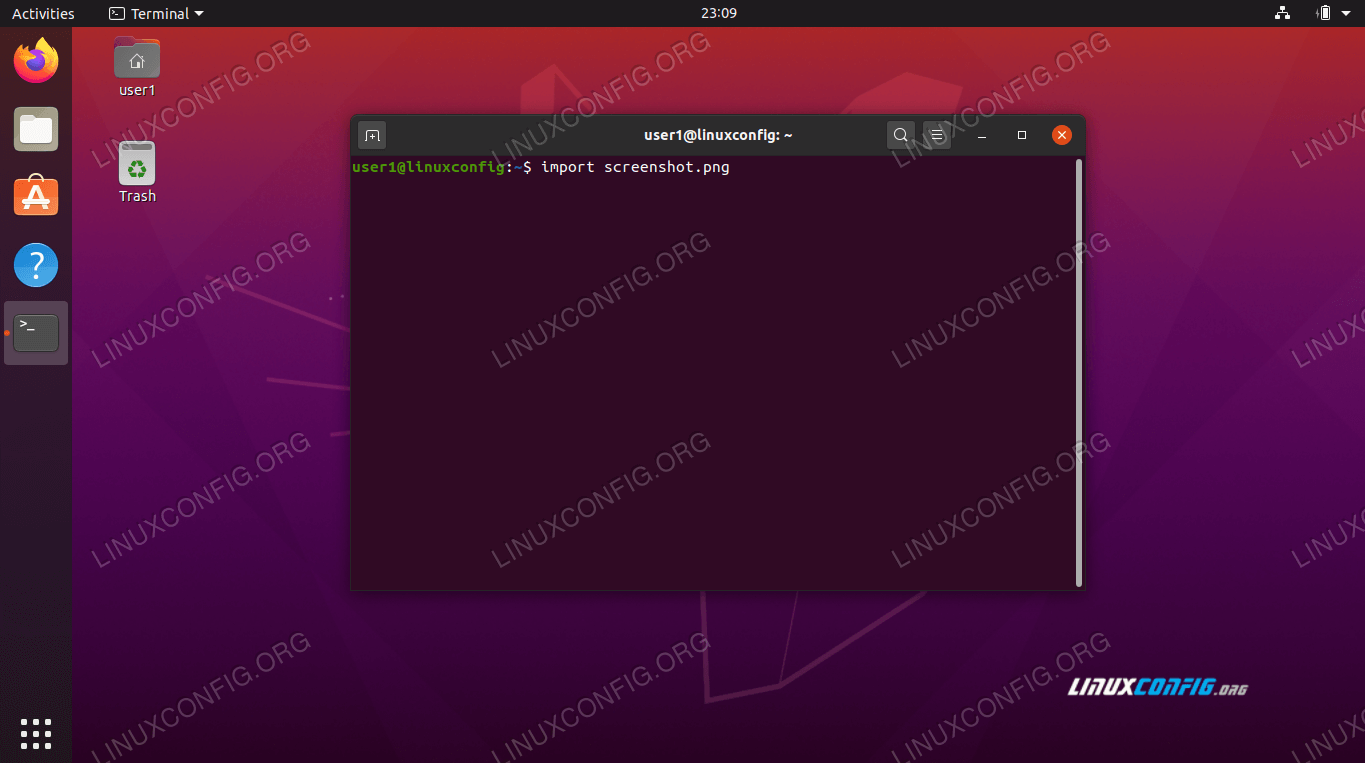 After typing the command, you’ll need to drag your mouse to specify the area that you’d like to capture. Obviously, you can replace screenshot.png with whatever you’d like to name your image. The screenshot will be saved to your home directory.

There are really a plethora of options you can pass to import, so it’s best to take a look at the man page to see all it can do: 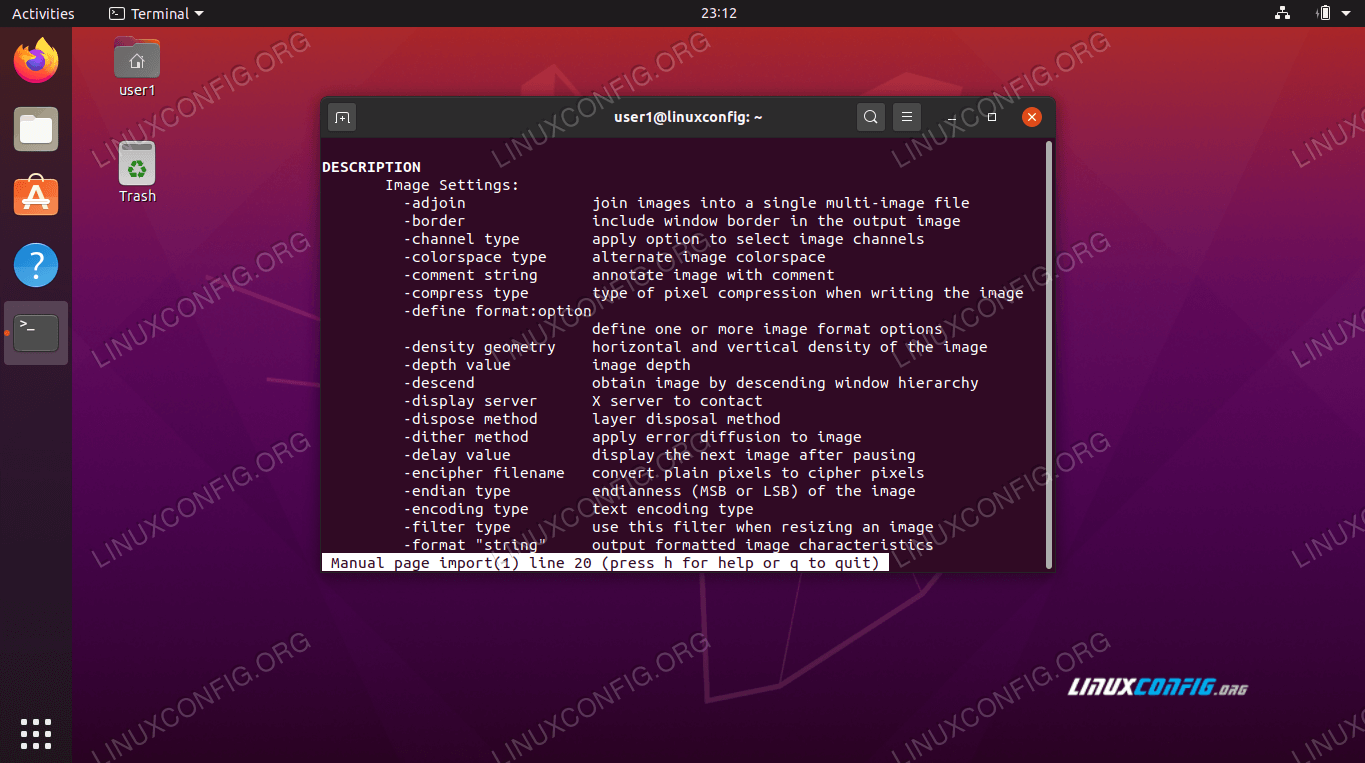 In this guide, we saw how to take screenshots in Ubuntu 20.04 Focal Fossa. We learned how to use Ubuntu’s default screenshot utility to capture images, as well as install extra software to give us some extra options and convenience.

Using the tools in this guide, you’ll be able to capture screenshots, screencasts, and annotate and upload your content in multiple ways on Ubuntu 20.04.