File servers often need to accommodate a variety of different client systems. Running Samba allows Windows systems to connect and access files, as well as other Linux systems and MacOS. An alternative solution would be to run an FTP/SFTP server, which can also support the connections from many systems.

In this guide, we’ll go over the instructions to setup a Samba server on AlmaLinux. This is a great way to prepare your file server after installing AlmaLinux or migrating from CentOS to AlmaLinux. We’ll also see how to connect to the file server from other AlmaLinux client computers. 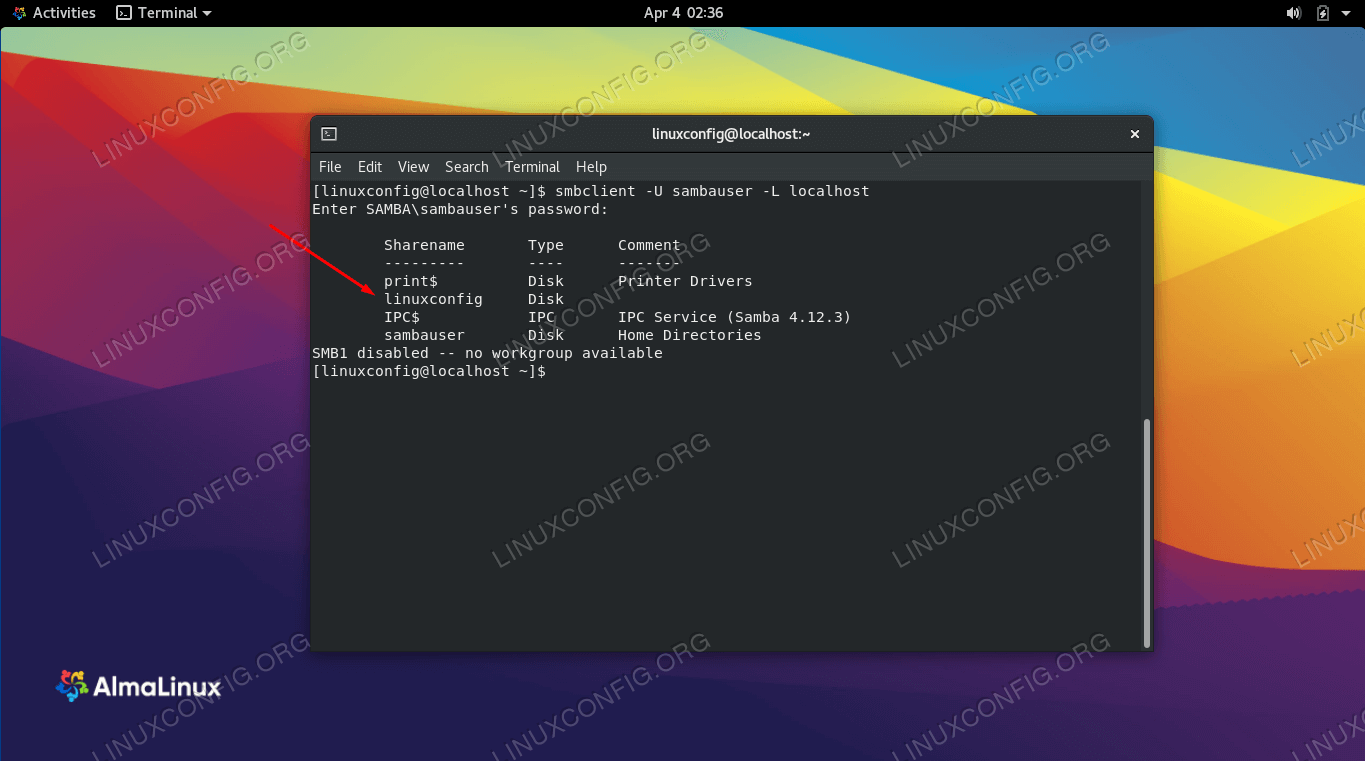 The first step is to install Samba on AlmaLinux, in case it’s not already on the system. Use the following command to install the necessary Samba packages via the dnf package manager.

Once the packages are installed, we have to start and enable the smb and the nmb daemons at boot. The first is the daemon which takes care of performing the actual transfers and the sharing operations, while the second performs the NetBIOS name resolutions, allowing the resources to appear when browsing the network on Windows. We can now enable and start both systemd services with just one command:

AlmaLinux comes with firewalld enabled by default, and it will block other connections from other computers that are trying to access our Samba service. We can allow the proper ports through firewalld by running the following commands. Be sure to add --zone option to your command if necessary for your configuration.

It’s possible to setup a Samba share that doesn’t require account credentials to connect to, but it’s not practical in most situations because of the obvious security concern. Instead, it’s better to create user accounts for the people that will be connecting to the Samba share.

The -M option passed to the command is the short form for --no-create-home, which is quite self-explanatory. And the -s option allows us to specify a shell, in this case an invalid one on purpose: /sbin/nologin. There’s no need to set a password for this user account, only a password for the Samba service.

Create a Samba password for the newly created user with the following command:

Now that we have Samba running and a new user created, let’s configure a directory that we wish to share through Samba.

For our example, we’ll make our shared directory at /mnt/shared.

Go all the way to the bottom of this file, and paste the following lines.

Note that in this example we have named our share linuxconfig by putting it inside of brackets. You’ll need to know this name when mounting the share on a remote server.

Save your changes to the file and exit it. Then, restart the Samba service for the new changes to take effect.

SELinux is enabled by default in AlmaLinux. We’ll need to assign the appropriate context to our shared directory and files by using the following command. This will allow Samba to function while still keeping SELinux in the recommened enforcing mode.

On the client system, we need to create an empty directory which we can use as a mount point for the remote Samba share.

Next, use the mount command to mount the remote Samba share to the folder we’ve just created. You can use either the hostname of the remote machine or the IP address.

Alternatively, you can access the Samba share from GNOME’s file manager by entering the following syntax. Replace the IP address as necessary. 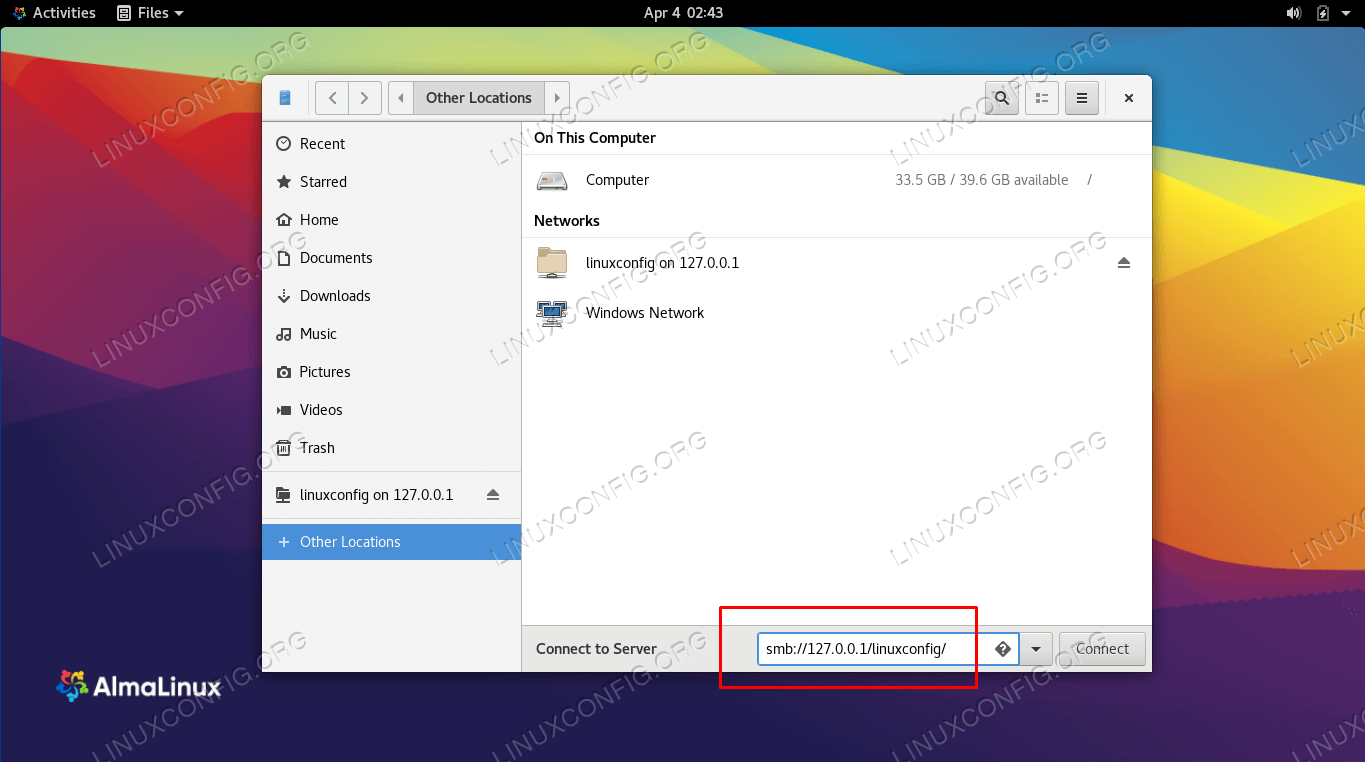 After logging in, the Samba share will be mounted on the left side of GNOME’s file manager. 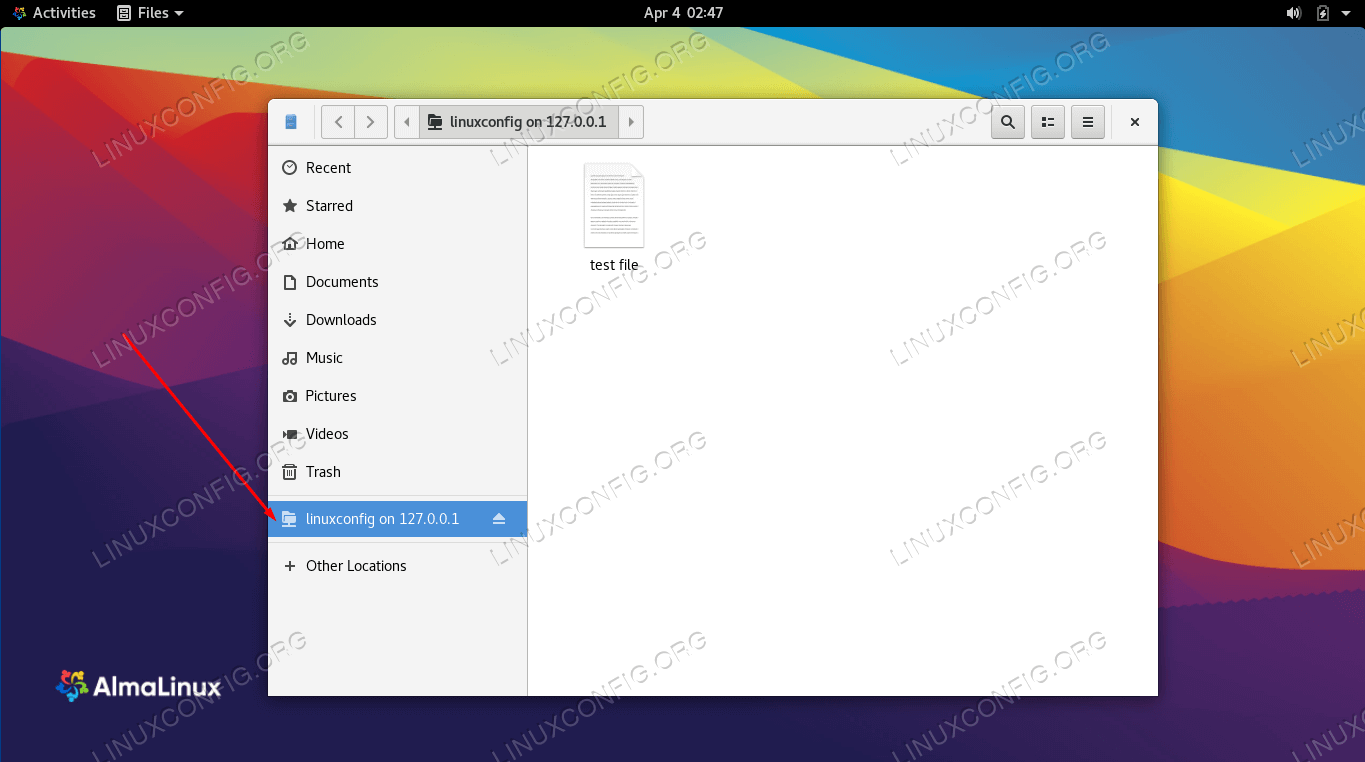 In this tutorial, we learned how to install Samba on AlmaLinux. We also saw how to create a Samba share, a Samba user, and configure the firewall and SELinux to permit Samba. Then, we went over the steps to connect to our Samba server from a client machine. Using this guide should allow you to create a file server that can host connections from various operating systems.