Renaming files on Linux systems is usually handled by the mv (move) command. The syntax is just mv old.txt new.txt. Simple enough, but what if we have multiple files that need to be renamed at once, even hundreds of them? The default mv utility can’t handle renaming more than one file unless we do a bit of scripting. There are also other utilities we can install to solve the problem, like rename and mmv.

In this guide, we’ll show you how to use the mv command as well as the rename and mmv tools to rename multiple files on your Linux distro. We’ll go over several examples so you can understand the syntax and how to use each method. 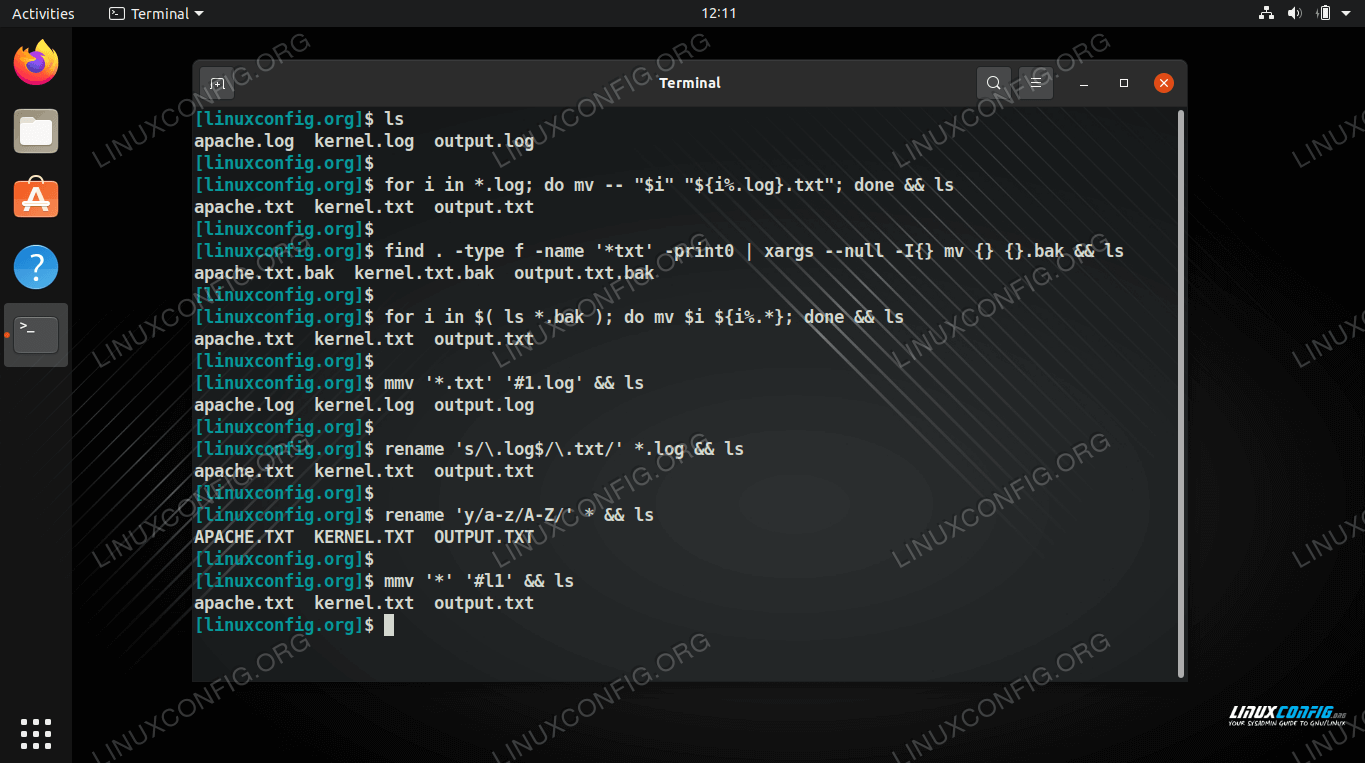 Renaming multiple files at once on Linux

Rename multiple files at once with mv command

Renaming multiple files with the mv command is easier if you know a little bit of Bash scripting. Take a look at some of the examples below to see some common uses with this method.

The advantage of this method is that we don’t need any extra Linux software – we just use the native mv utility, and sometimes coupled with ls, find, or xargs. However, as we’ve seen in these examples, it can be rather complex to do something simple like rename a few files. Check out some of the other methods below to see some more convenient options that require installation.

Your Linux distro may already have rename installed by default. Just in case it’s not already installed, you can use the appropriate command below to install it through your system’s package manager.

To install rename on Ubuntu, Debian, and Linux Mint:

To install rename on CentOS, Fedora, AlmaLinux, and Red Hat:

To install rename on Arch Linux and Manjaro:

The rename command accepts perl expression to do the actual renaming. If you’re already familiar with this syntax, then rename will be very easy to use. If not, don’t worry, we have some examples below that will help you get the hang of it.

Here we’ve compiled some of the most common scenarios that you would need to rename multiple files at once. These commands assume that the files you wish to rename are in your present working directory. You can always specify the path to other directories if you wish.

There are a few options you can use with rename. The -n option will show you what changes rename is going to make, without actually making the changes. This helps you avoid any undesirable changes. The -v (verbose) option will print the names of files that have been successfully renamed.

You can use the appropriate command below to install mmv through your system’s package manager.

To install mmv on Ubuntu, Debian, and Linux Mint:

To install mmv on CentOS, Fedora, AlmaLinux, and Red Hat:

To install mmv on Arch Linux and Manjaro:

The most attractive feature of mmv is its ability to easily rename a lot of files by accepting wildcards in the command. This allows you to easily append or remove certain patterns from file names, or even arrange text within the names. Check out some of the examples below to learn the syntax for the mmv tool, and see some of the most common commands that you may find yourself running with it. Keep in mind that you can use the -n option with mmv to preview changes.

In this guide, we learned several different methods to rename multiple files simultaneously on Linux. We also saw a multitude of command line examples that can cover a lot of different scenarios or be easily adapted to fit similar situations. Bulk renaming can be done through native bash utilities like mv, ls, xargs, and find, or we can install the mmv or rename utility to make our life a little easier. Every method has their strengths and weaknesses, so use whichever one you think will be most convenient for you.