Install and play League of Legends with Lutris.

This will work on most current distributions but focuses on Ubuntu.

League of Legends is a hugely popular MoBA game. It has a massive and highly active community around it, and it’s long been one of the top competitive games in the esports scene. League is also one of the most streamed and watched games on Twitch.

League has been around for long enough to build its massive following. Unfortunately, even with its extensive history and blockbuster success, League of Legends has never been ported to Linux. There is hope. You can still play League on your Linux computer with the help of Lutris and Wine.

Before you can get started with League, you’ll need to install Lutris. Don’t worry about installing Wine separately. Lutris will take care of that. You will need the latest graphics drivers for your GPU, though. Make sure you have them installed and up-to-date before you go any further.

If you’re on Ubuntu, we already have a guide for installing Lutris and getting it set up on your system. Follow the guide, and jump back over here, when you’re ready.

If you’re on another distro, you can absolutely still install Lutris, but the process won’t be covered here.

Open your browser and navigate to the Lutris League of Legends page. Once you’re there, sign in to your Lutris account, if you haven’t already done so. 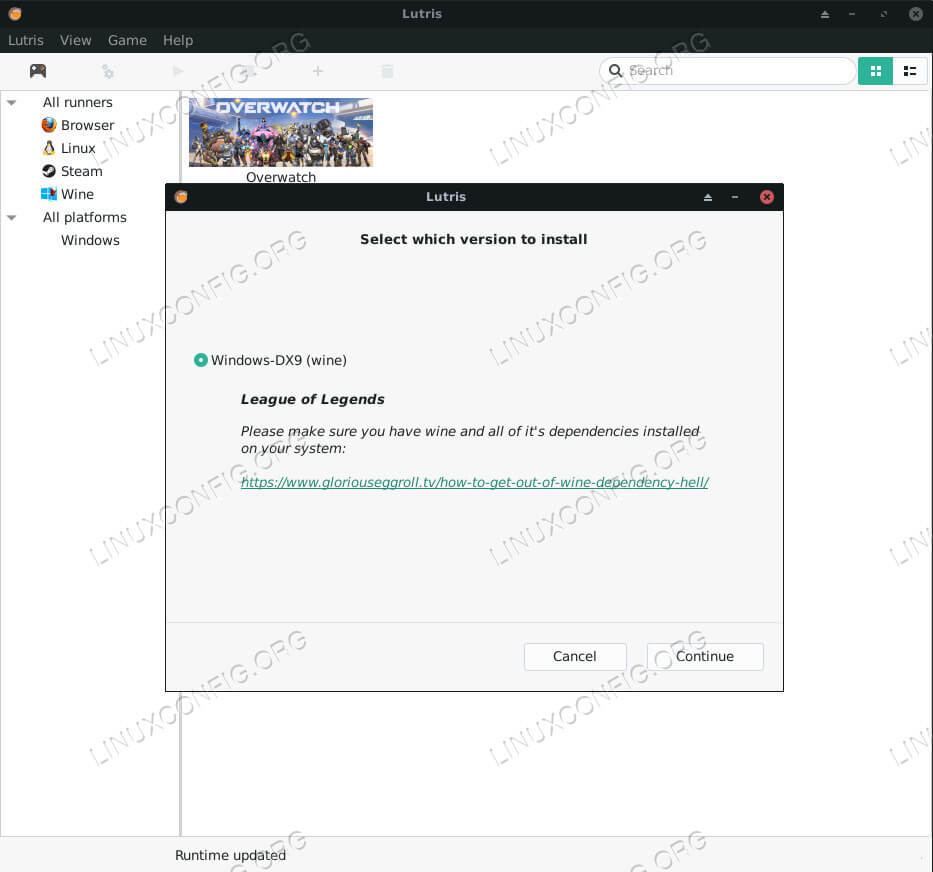 Click on the “Install” button below the slideshow of League screenshots. Lutris will open automatically, or your browser will ask you to open it. Either way, Lutris will ask you if you want to begin the install. Click “Continue.”

Next, it’ll ask you to confirm the install location for League. Pick whichever folder works best for you. 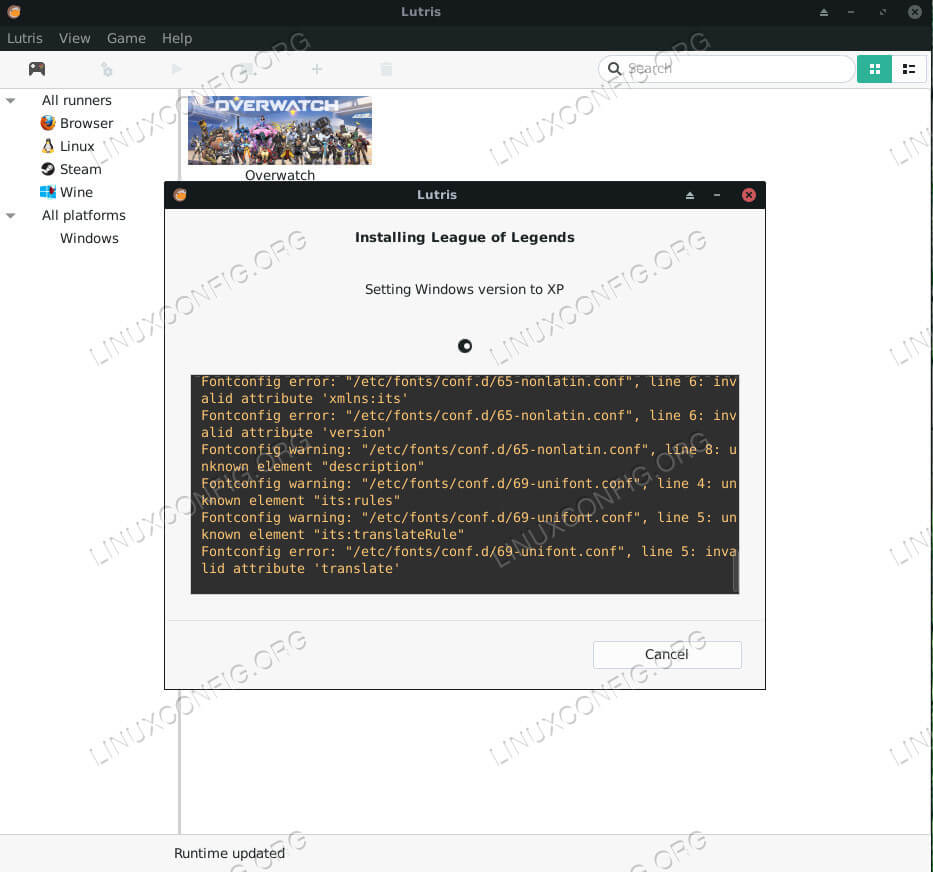 Lutris will begin laying the groundwork and setting up the Wine prefix for the best results. When it’s ready, the regular Windows League installer will pop open. Follow the installer like normal. There’s nothing especially strange there. The install path is relative to the Wine prefix that Lutris just set up, so don’t worry about that. 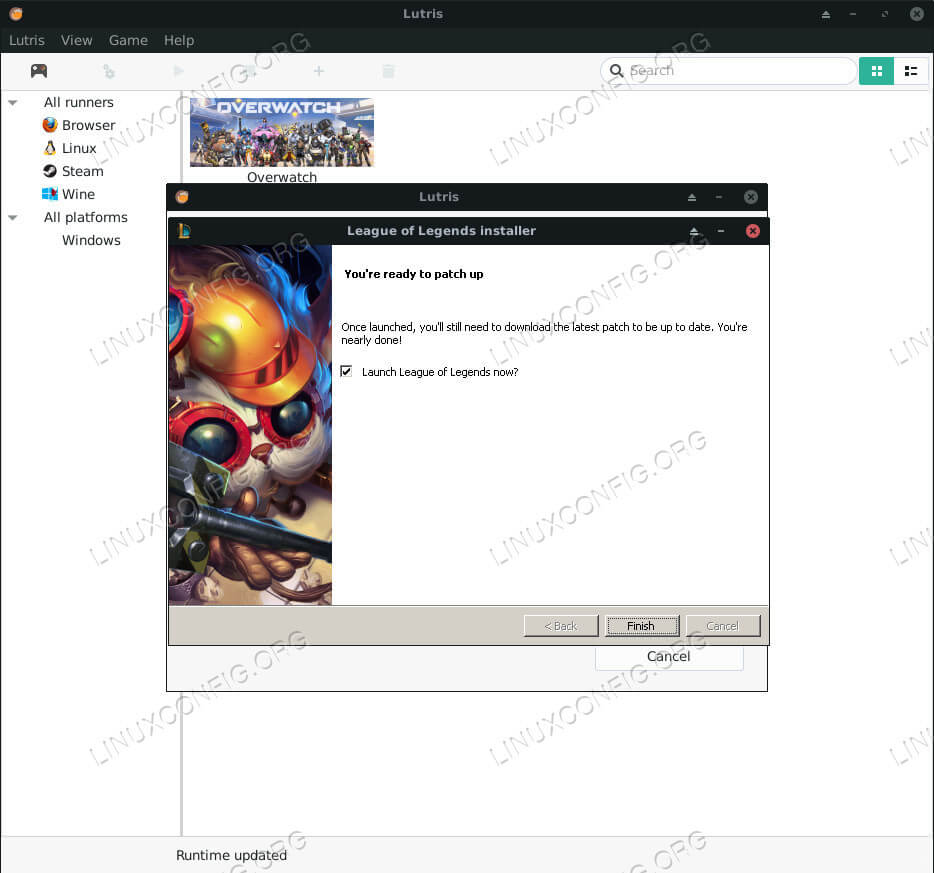 When the installer finishes, it’ll ask you if you want to run League now. Don’t run it just yet.

Lutris will continue installing and configuring additional Windows DLLs and extras that it needs to run League properly.

When Lutris is done, it’ll ask you if you want an application menu shortcut. It’s probably a good idea to have one. Instead of launching the game here, click “Close.” Lutris install scripts usually come with a slightly older version of Wine. It’s always a good idea to update it.

At the top of your Lutris window, click on the “Runners” icon. It’ll be different, depending on your system icons. It should look like gears or something similar, and it’s the second one from the left. 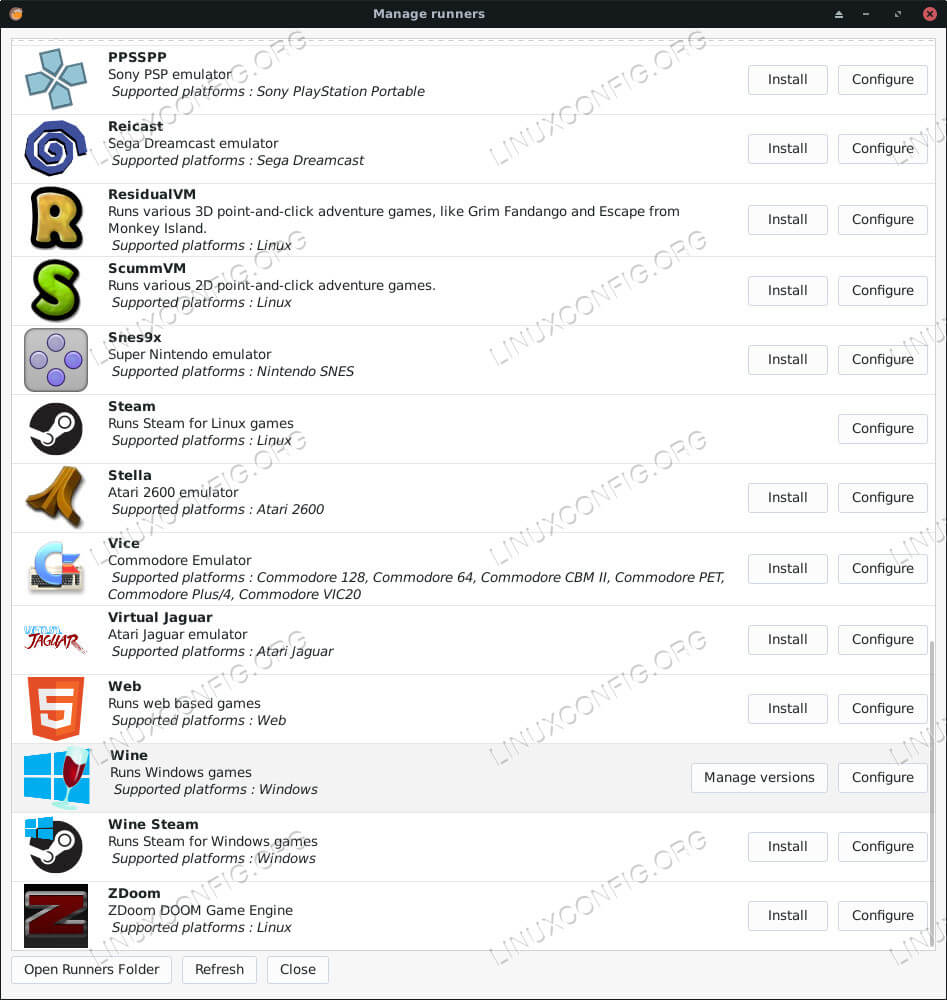 A new window will open up and list all of the Lutris runners in alphabetical order. Scroll down to Wine, and click the “Manage versions” button. 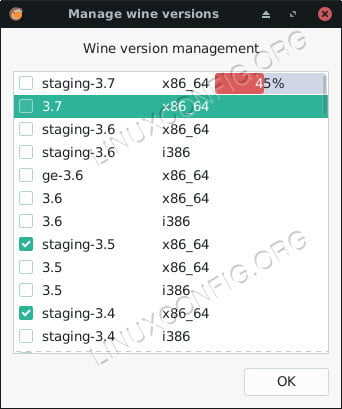 Another new window will open up with a series of checkboxes and corresponding Wine versions. Check the latest version of Wine Staging. Checking the box will begin the install. When it’s done, back out to the main Lutris screen.

You should see League of Legends listed in your Lutris library by now. Right click on it, and select “Configure.” A new configuration window will pop open. On the menu along the top, select the “Runner Options” tab. 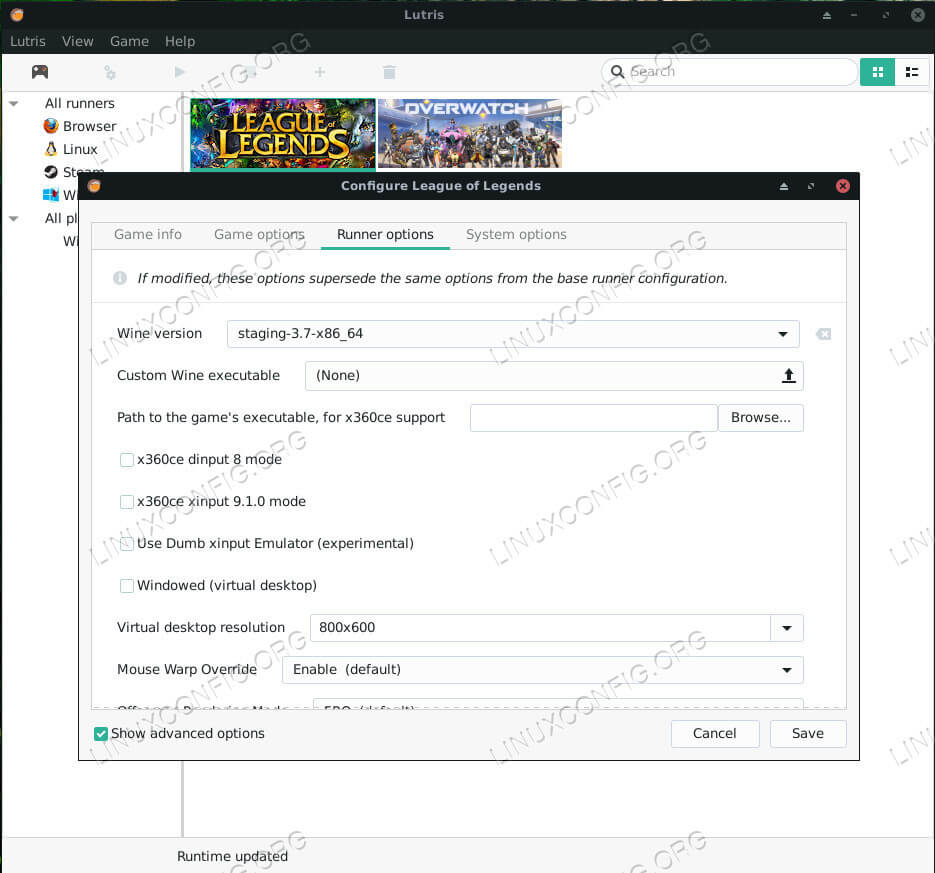 The top field on that tab allows you to select the Wine version. Open up the menu, and select the new version of Wine that you just installed. When you’re done, select “Save” at the bottom right of the Window.

To play League, click on the banner image on the Lutris home screen. League may need to patch itself before opening up. Wait, and let it do what it needs to. 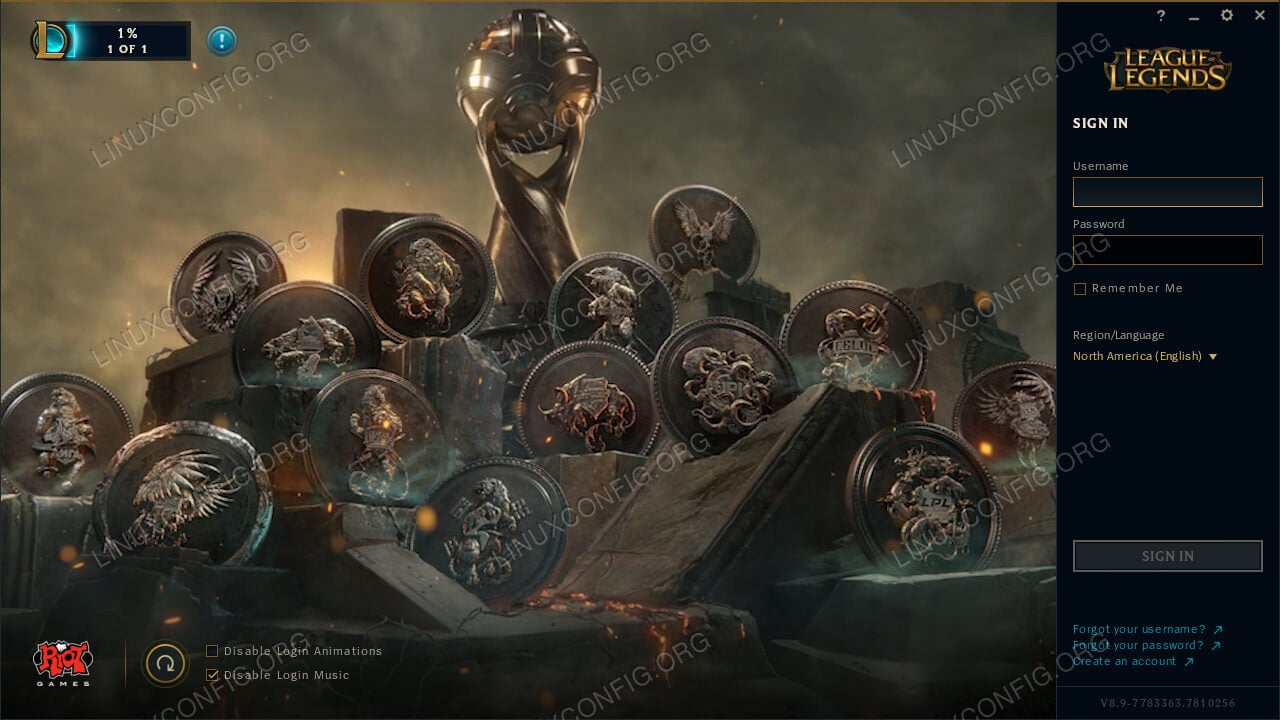 From now on, you can play League of Legends by opening Lutris and clicking on the banner image or with the application menu launcher that you created earlier.

You now have League of Legends installed and running successfully on your Linux PC! Keep an eye out for future updates from Lutris, Wine, and League itself. You can keep Wine updated using the same procedure as before.