HTTP is the protocol used by the World Wide Web, that’s why being able to interact with it programmatically is essential: scraping a web page, communicating with a service APIs, or even simply downloading a file, are all tasks based on this interaction. Python makes such operations very easy: some useful functions are already provided in the standard library, and for more complex tasks it’s possible (and even recommended) to use the external requests module. In this first article of the series we will focus on the built-in modules. We will use python3 and mostly work inside the python interactive shell: the needed libraries will be imported only once to avoid repetitions.

HTTP request with python – Pt. I: The standard library

Performing requests with the standard library

Let’s start with a very easy GET request. The GET HTTP verb is used to retrieve data from a resource. When performing such type of requests, it is possible to specify some parameters in the form variables: those variables, expressed as key-value pairs, form a query string which is “appended” to the URL of the resource. A GET request should always be idempotent (this means that the result of the request should be independent from the number of times it is performed) and should never be used to change a state. Performing GET requests with python is really easy. For the sake of this tutorial we will take advantage of the open NASA API call which let us retrieve the so called “picture of the day”:

The first thing we did was to import the urlopen function from the urllib.request library: this function returns an http.client.HTTPResponse object which has some very useful methods. We used the function inside a with statement because the HTTPResponse object supports the context-management protocol: resources are immediately closed after the “with” statement is executed, even if an exception is raised.

At this point we have the body of the response as a bytes object, referenced by the response_content variable. We may want to transform it into something else. To turn it into a string, for example, we use the decode method, providing the encoding type as argument, typically:

In the example above we used the utf-8 encoding. The API call we used in the example, however, returns a response in JSON format, therefore, we want to process it with the help of the json module:

The json.loads method deserializes a string, a bytes or a bytearray instance containing a JSON document into a python object. The result of calling the function, in this case, is a dictionary:

As an alternative we could also use the json_load function (notice the missing trailing “s”). The function accepts a file-like object as argument: this means that we can use it directly on the HTTPResponse object:

Another very useful method usable on the HTTPResponse object is getheaders. This method returns the headers of the response as an array of tuples. Each tuple contains an header parameter and its corresponding value:

You can notice, among the others, the Content-type parameter, which, as we said above, is application/json. If we want to retrieve only a specific parameter we can use the getheader method instead, passing the name of the parameter as argument:

Getting the status of the response

Getting the status code and reason phrase returned by the server after an HTTP request is also very easy: all we have to do is to access the status and reason properties of the HTTPResponse object:

Including variables in the GET request

The URL of the request we sent above contained only one variable: api_key, and its value was "DEMO_KEY". If we want to pass multiple variables, instead of attaching them to the URL manually, we can provide them and their associated values as key-value pairs of a python dictionary (or as a sequence of two-elements tuples); this dictionary will be passed to the urllib.parse.urlencode method, which will build and return the query string. The API call we used above, allow us to specify an optional “date” variable, to retrieve the picture associated with a specific day. Here is how we could proceed:

First we defined each variable and its corresponding value as key-value pairs of a dictionary, than we passed said dictionary as an argument to the urlencode function, which returned a formatted query string. Now, when sending the request, all we have to do is to attach it to the URL:

If we send the request using the URL above, we obtain a different response and a different image:

In case you didn’t notice, the returned image URL points to the recently unveiled first picture of a black hole: 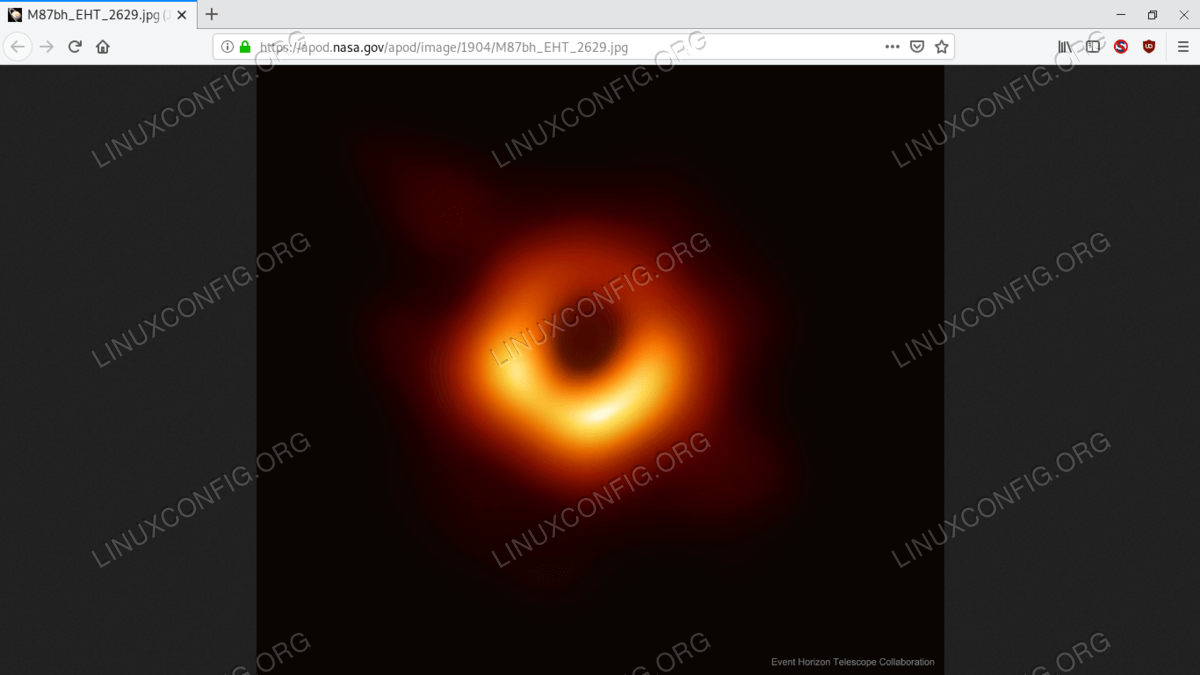 Sending a POST request, with variables ‘contained’ inside the request body, using the standard library, requires additional steps. First of all, as we did before, we construct the POST data in the form of a dictionary:

After we constructed our dictionary, we want to use the urlencode function as we did before, and additionally encode the resulting string in ascii:

Finally, we can send our request, passing the data as the second argument of the urlopen function. In this case we will use https://httpbin.org/post as destination URL (httpbin.org is a request & response service):

Sending JSON data in the request

What if we want to send a JSON representation of data with our request? First we define the structure of the data, than we convert it to JSON:

We also want to use a dictionary to define custom headers. In this case, for example, we want to specify that our request content is application/json:

Finally, instead of sending the request directly, we create a Request object and we pass, in order: the destination URL, the request data and the request headers as arguments of its constructor:

One important thing to notice is that we used the json.dumps function passing the dictionary containing the data we want to be included in the request as its argument: this function is used to serialize an object into a JSON formatted string, which we encoded using the encode method.

At this point we can send our Request, passing it as the first argument of the urlopen function:

This time we can see that the dictionary associated with the “form” key in the response body is empty, and the one associated with “json” key represents the data we sent as JSON. As you can observe, even the custom header parameter we sent has been received correctly.

When interacting with APIs we may need to use HTTP verbs other than just GET or POST. To accomplish this task we must use the last parameter of the Request class constructor and specify the verb we want to use. The default verb is GET if the data parameter is None, otherwise POST is used. Suppose we want to send a PUT request:

Another very common operation we may want to perform is to download some kind of file from the web. Using the standard library there are two ways to do it: using the urlopen function, reading the response in chunks (especially if the file to download is big) and writing them to a local file “manually”, or using the urlretrieve function, which, as stated in the official documentation, is considered part of an old interface, and might become deprecated in the future. Let’s see an example of both strategies.

Say we want to download the tarball containing the latest version of the Linux kernel source code. Using the first method we mentioned above, we write:

In the example above we first used both the urlopen function and the open one inside with statements and therefore using the context-management protocol to ensure that resources are cleaned immediately after the block of code where they are used is executed. Inside a while loop, at each iteration, the chunk variable references the bytes read from the response, (16384 in this case – 16 Kibibytes). If chunk is not empty, we write the content to the file object (“tarball”); if it is empty, it means that we consumed all the content of the response body, therefore we break the loop.

The alternative and even more concise method to download a file using the standard library is by the use of the urllib.request.urlretrieve function. The function takes four argument, but only the first two interest us now: the first is mandatory, and is the URL of the resource to download; the second is the name used to store the resource locally. If it is not given, the resource will be stored as a temporary file in /tmp. The code becomes:

Very simple, isn’t it? The function returns a tuple which contains the name used to store the file (this is useful when the resource is stored as temporary file, and the name is a random generated one), and the HTTPMessage object which holds the headers of the HTTP response.

In this first part of the series of articles dedicated to python and HTTP requests, we saw how to send various types of requests using only standard library functions, and how to work with responses. If you have doubt or want to explore things more in depth, please consult the official official urllib.request documentation. The next part of the series will focus on Python HTTP request library.