This is tested with Fedora 25 but may work with earlier or later versions of Fedora.

An working install of Fedora with root privileges.

MakeMKV is a powerful tool for working with DVDs and Blu-Ray. In fact, it is probably the most reliable way to work with and play Blu-Ray on Linux.

MakeMKV is partially open source and partially proprietary. It isn’t distributed in Fedora’s repositories. The source and binary blobs are available from the developer’s website. MakeMKV is in a state of perpetual beta testing for Linux, so it’s free of charge but also not officially supported.

Before you can build MakeMKV, you’re going to need to install some development tools and libraries on Fedora.

Start off by enabling the RPM Fusion repository. It’s needed for FFMPEG, which MakeMKV relies on.

Now, install all of the dependencies.

The MakeMKV developers ship it in two tarballs. One contains the open source components, and the other contains the binary ones. You can get them from this https://goo.gl/z4uGZ4 forum post, or you can pull them directly with wget, provided the version listed here is still the latest.

It’s a good idea to make a build directory to download the tarballs into and compile them. Start by doing that, and pull the tarballs.

When you’re done downloading the tarballs, you can extract them both.

You need to build MakeMKV’s components separately. Begin with the open source part, and switch to the binary part. Ultimately, Fedora will see them as one application, anyway.

cd into the open source directory that you extracted. In the directory, you can configure, compile, and install the source.

You also have to set up and install the binary portion. cd into the binary directory and run make before installing it.

MakeMKV is a graphical application built with Qt. You can search for it in GNOME, and launch it like you would any program that you installed regularly from Fedora’s repositories. 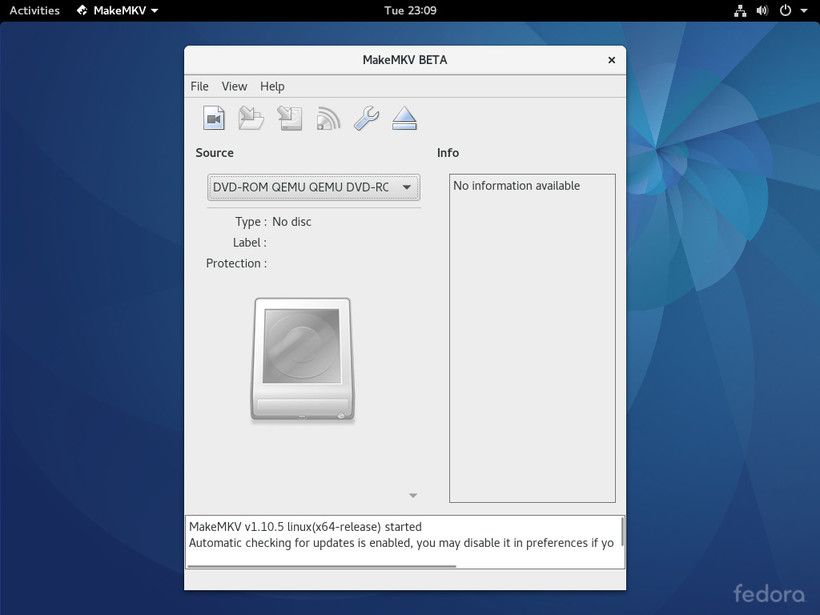 MakeMKV may not be entirely open source, but it is a great option for dealing with DRM’d video from DVDs and Blu-Ray on Linux.

MakeMKV enables you to play your videos, and of course, make .mkv file backups when needed.