Kubernetes is leading software in container orchestration. Kubernetes works by managing clusters, which is simply a set of hosts meant for running containerized applications. In order to have a Kubernetes cluster, you need a minimum of two nodes – a master node and a worker node. Of course, you can expand the cluster by adding as many worker nodes as you need.

In this guide, we’re going to deploy a Kubernetes cluster consisting of two nodes, both of which are running Ubuntu 20.04 Focal Fossa. Having two nodes in our cluster is the most basic configuration possible, but you’ll be able to scale that configuration and add more nodes if you wish. 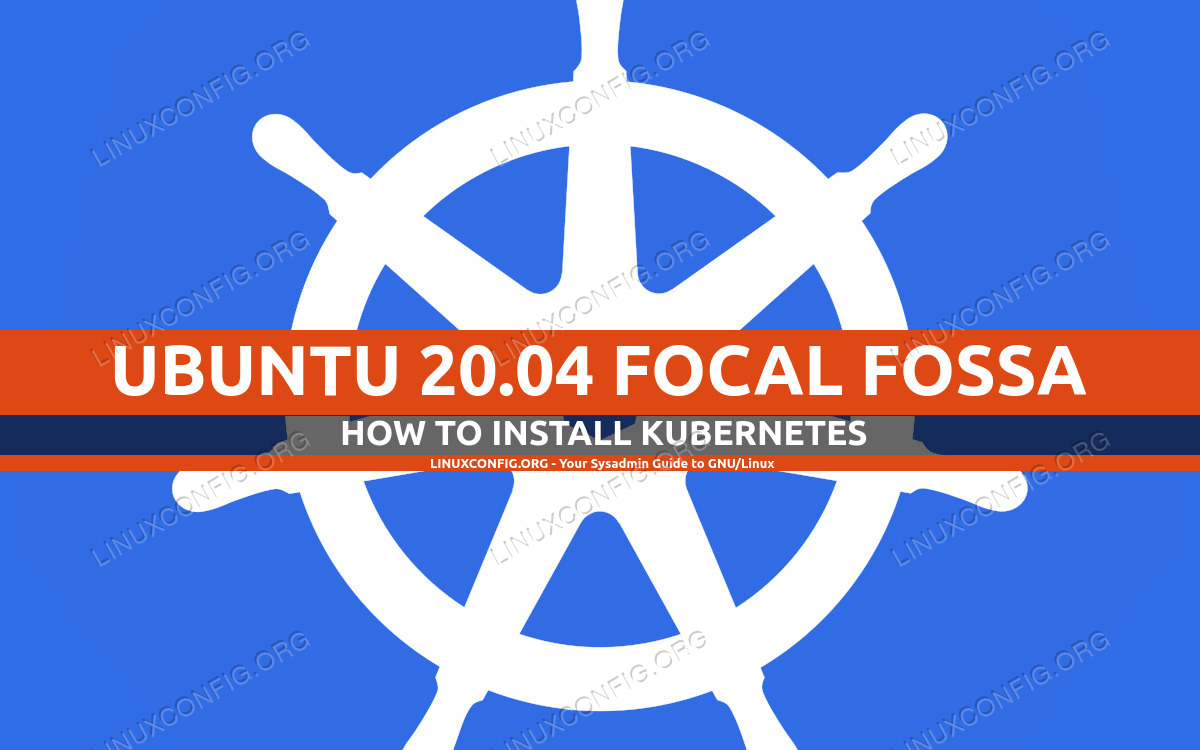 The master node will deploy a Kubernetes cluster and the worker node simply joins it. Since Kubernetes clusters are designed to run containerized software, after we get our cluster up and running we are going to deploy a Nginx server container as a proof of concept.

Both of the nodes will need to have Docker installed on them, as Kubernetes relies on it. Open a terminal and type the following commands on both the master and the worker node to install Docker:

Once Docker has finished installing, use the following commmands to start the service and to make sure it starts automatically after each reboot:

Now we are ready to install Kubernetes. Just like all the other commands up to this point, make sure that you are doing this on both nodes. On your Kubernetes master and worker, first install the apt-transport-https package, which will allow us to use http and https in Ubuntu’s repositories. Now is also a good time to install curl since we will need it in a moment:

Next, add the Kubernetes signing key to both systems:

Next, we’ll add the Kubernetes package repository. Note that at the time of this writing, Ubuntu 16.04 Xenial Xerus is the latest Kubernetes repository available. This should eventually be superseded by Ubuntu 20.04 Focal Fossa, and the following command can then be updated from xenial to focal.

Now we can install Kubernetes:

Kubernetes will refuse to function if your system is using swap memory. Before proceeding further, make sure that the master and worker node have swap memory disabled with this command:

That command will disable swap memory until your systems reboot, so to make this change persists, use nano or your favorite text editor to open this file:

Inside this file, comment out the /swapfile line by preceeding it with a # symbol, as seen below. Then, close this file and save the changes. 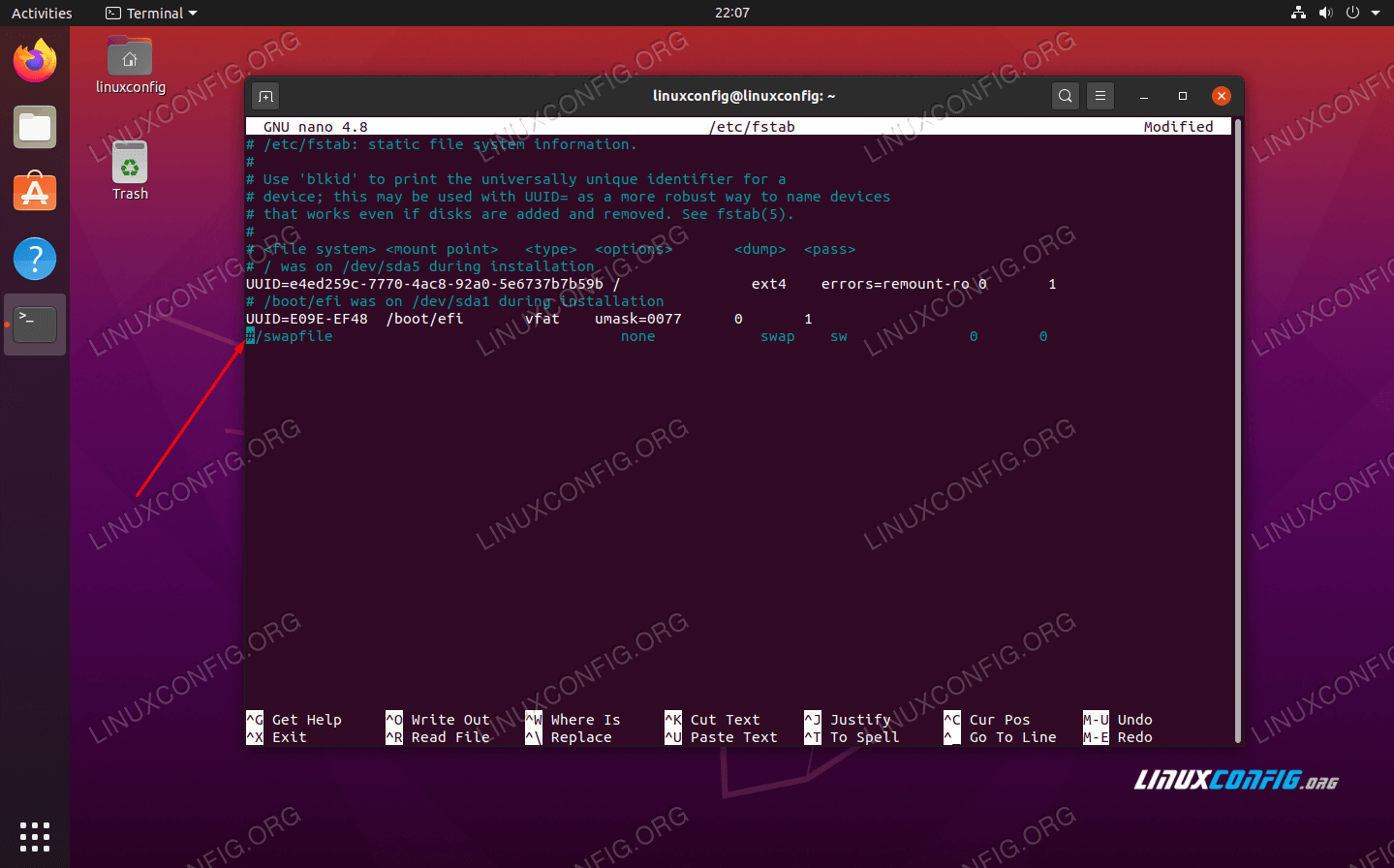 Next, ensure that all of your nodes have a unique hostname. In our scenario, we’re using the hostnames kubernetes-master and kubernetes-worker to easily differentiate our hosts and identify their roles. Use the following command if you need to change your hostnames:

And on the worker node:

You won’t notice the hostname changes in the terminal until you open a new one. Lastly, make sure that all of your nodes have an accurate time and date, otherwise you will run into trouble with invalid TLS certificates.

Now we’re ready to initialize the Kubernetes master node. To do so, enter the following command on your master node: 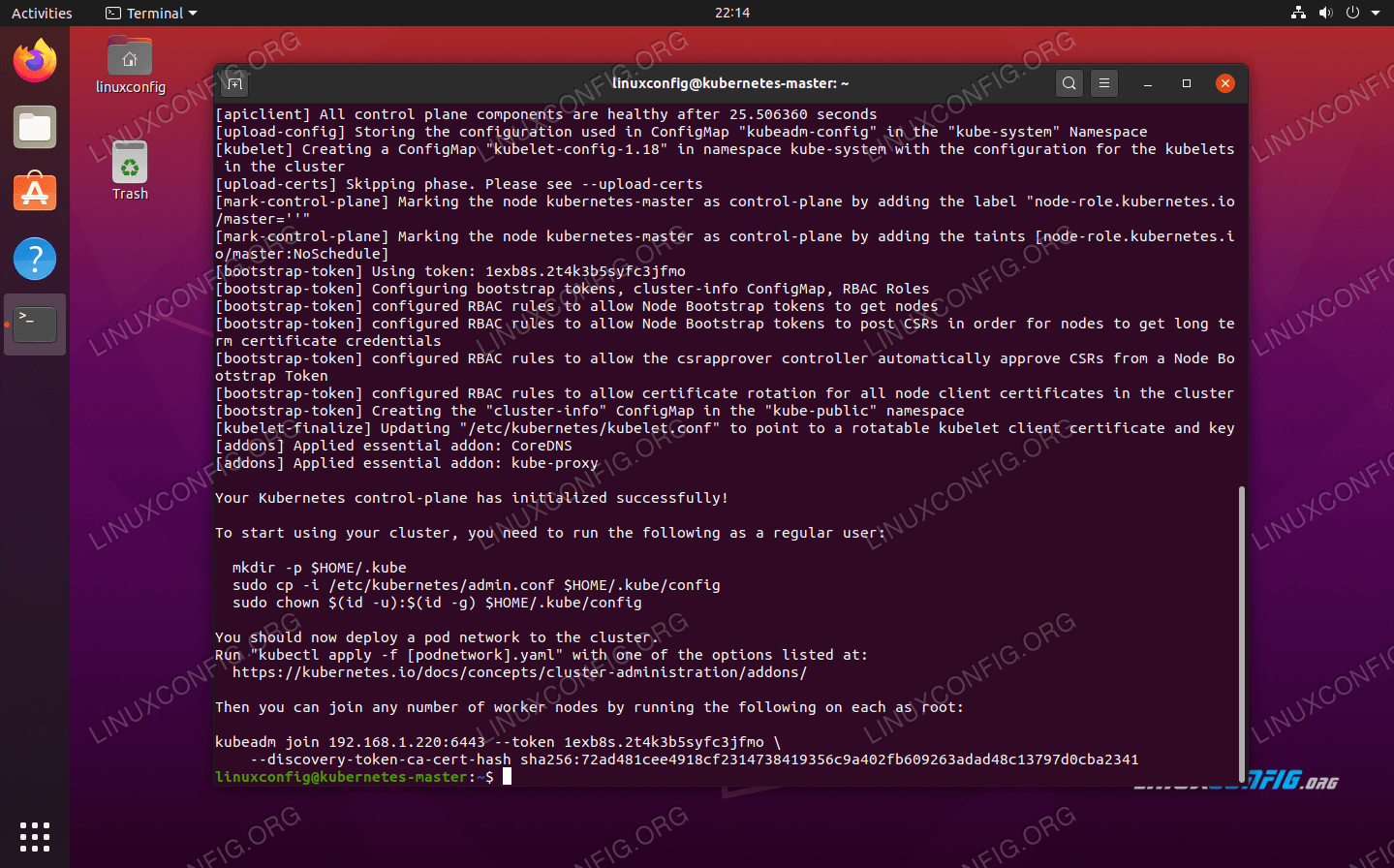 The Kubernetes master node has now been initialized. The output gives us a kubeadm join command that we will need to use later to join our worker node(s) to the master node. So, take note of this command for later.

The output from above also advises us to run several commands as a regular user to start using the Kubernetes cluster. Run those three commands on the master node:

Next step is to deploy a pod network. The pod network is used for communication between hosts and is necessary for the Kubernetes cluster to function properly. For this we will use the Flannel pod network. Issue the following two commands on the master node:

Depending on your environment, it may take just a few seconds or a minute to bring the entire flannel network up. You can use the kubectl command to confirm that everything is up and ready: 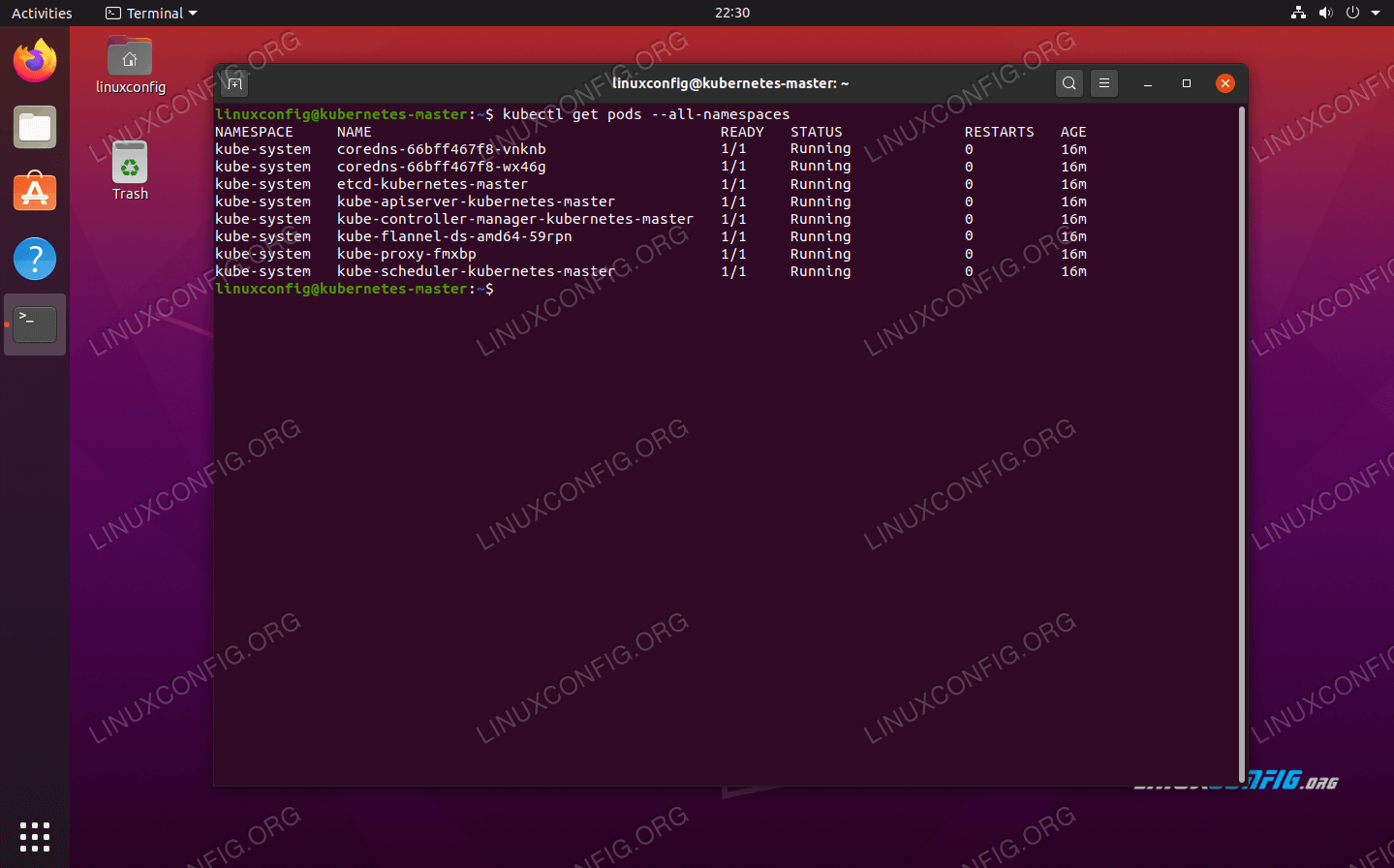 When all of the STATUS column shows ‘Running,’ it’s an indication that everything is finished deploying and good to go.

Now our cluster is ready to have the worker nodes join. Use the kubeadm join command retrieved earlier from the Kubernetes master node initialization output to join your Kubernetes cluster: 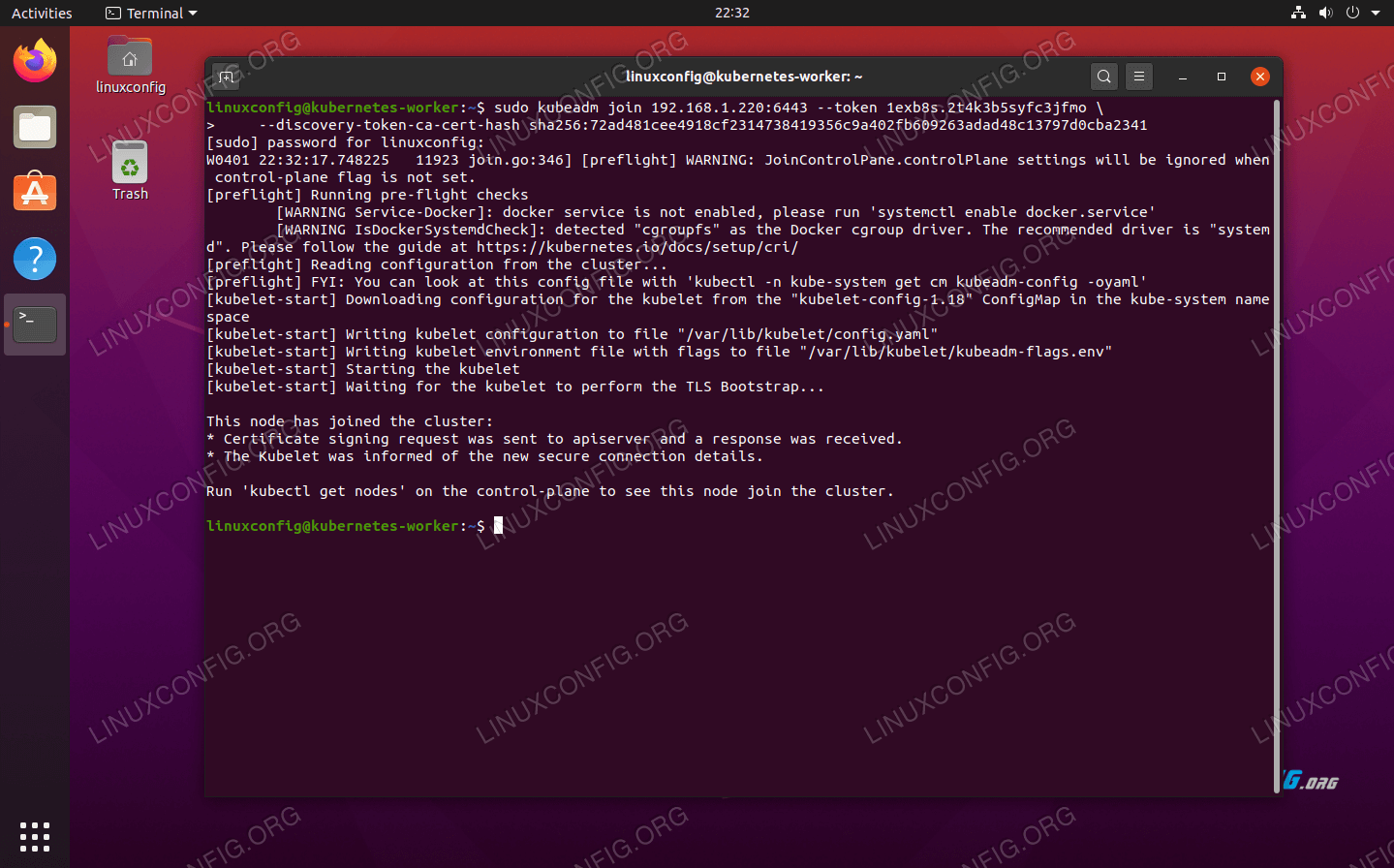 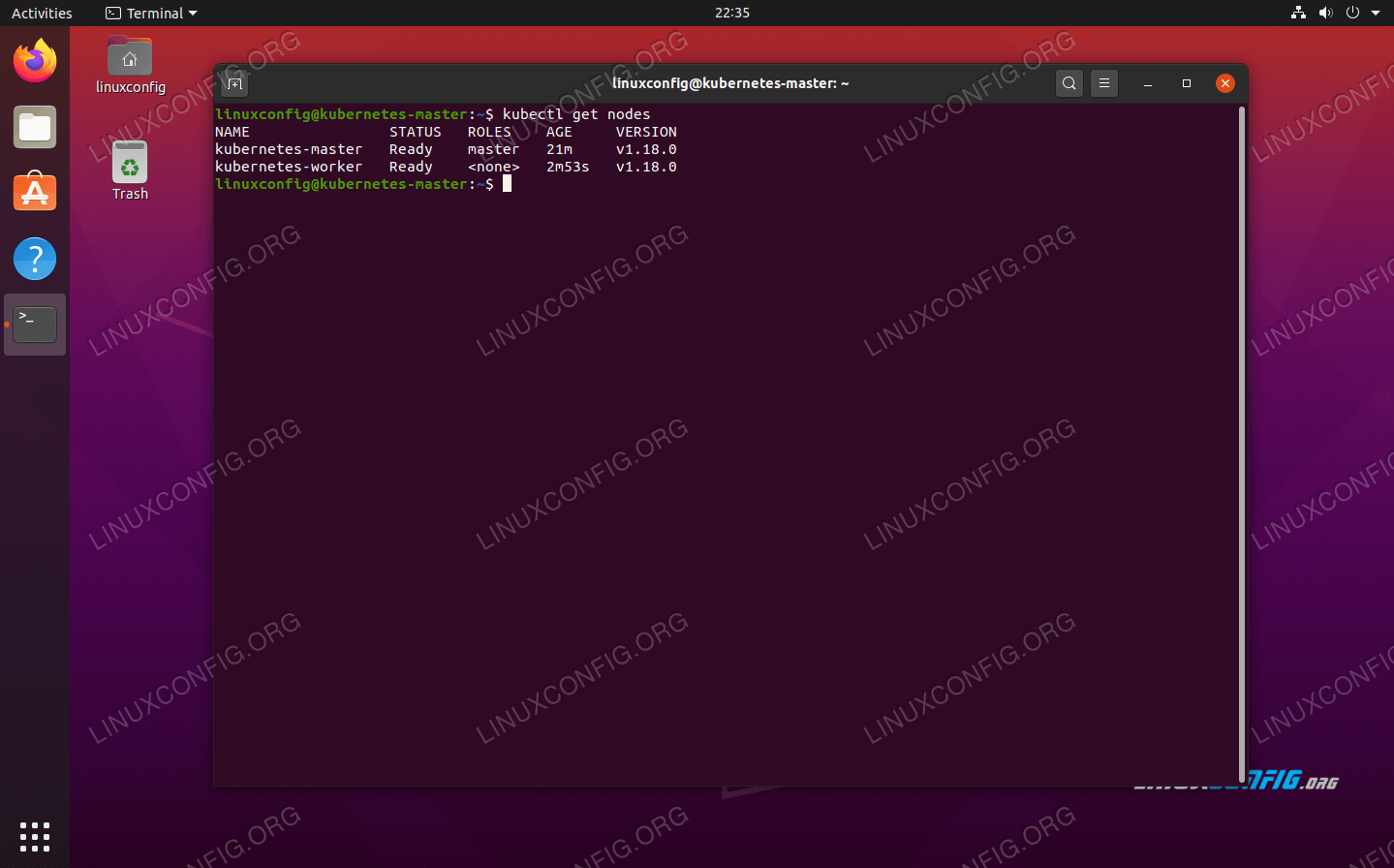 Displays what nodes are currently in the Kubernetes cluster

Deploying a service on Kubernetes cluster

Now we are ready to deploy a service into the Kubernetes cluster. In our example, we will deploy a Nginx server into our new cluster as a proof of concept. Run the following two commands on your master node:

You should now see a new nginx docker container deployed on your worker node: 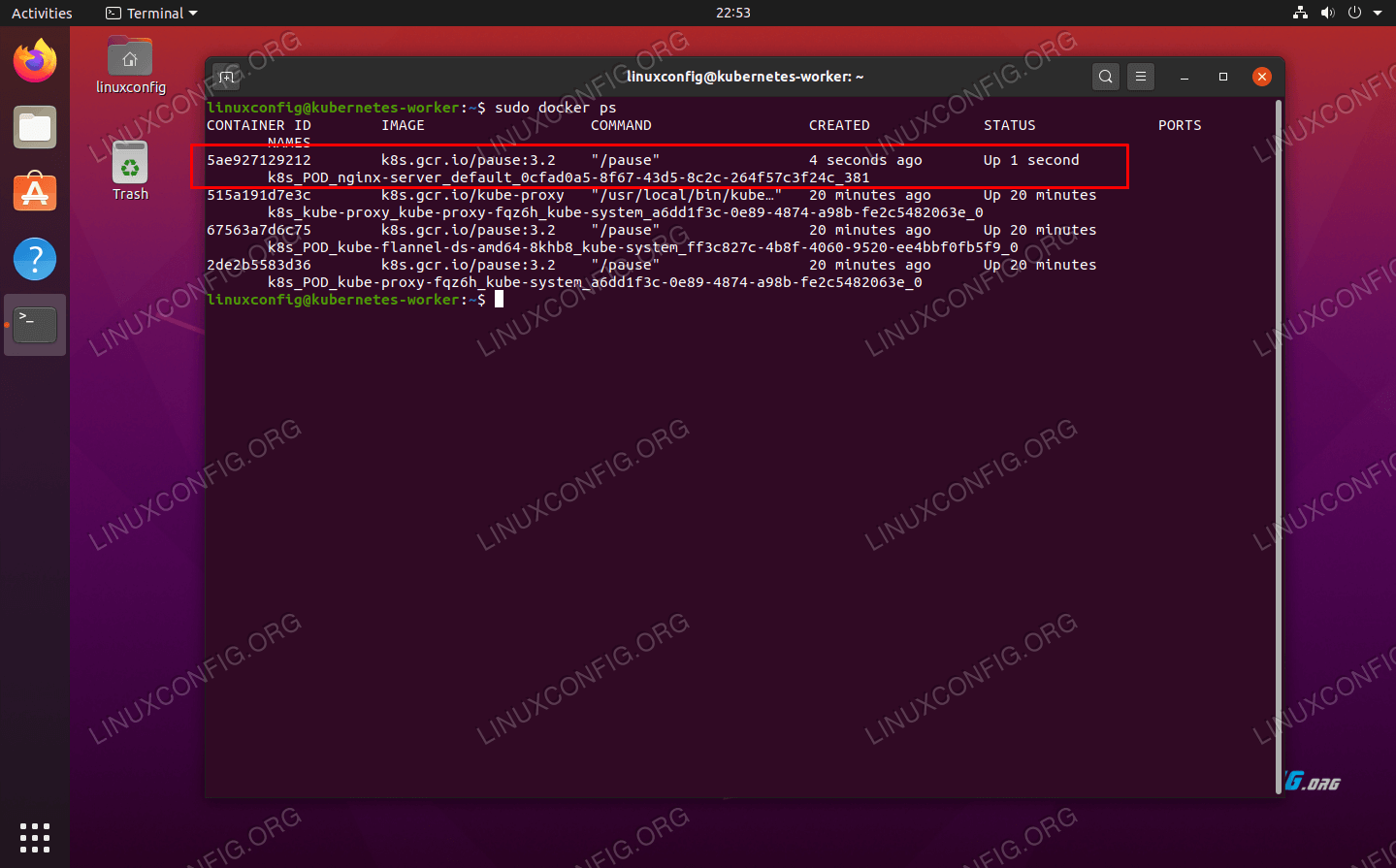 You can see a running list of all available services running in your cluster with the following command, issued from the Kubernetes maser node: 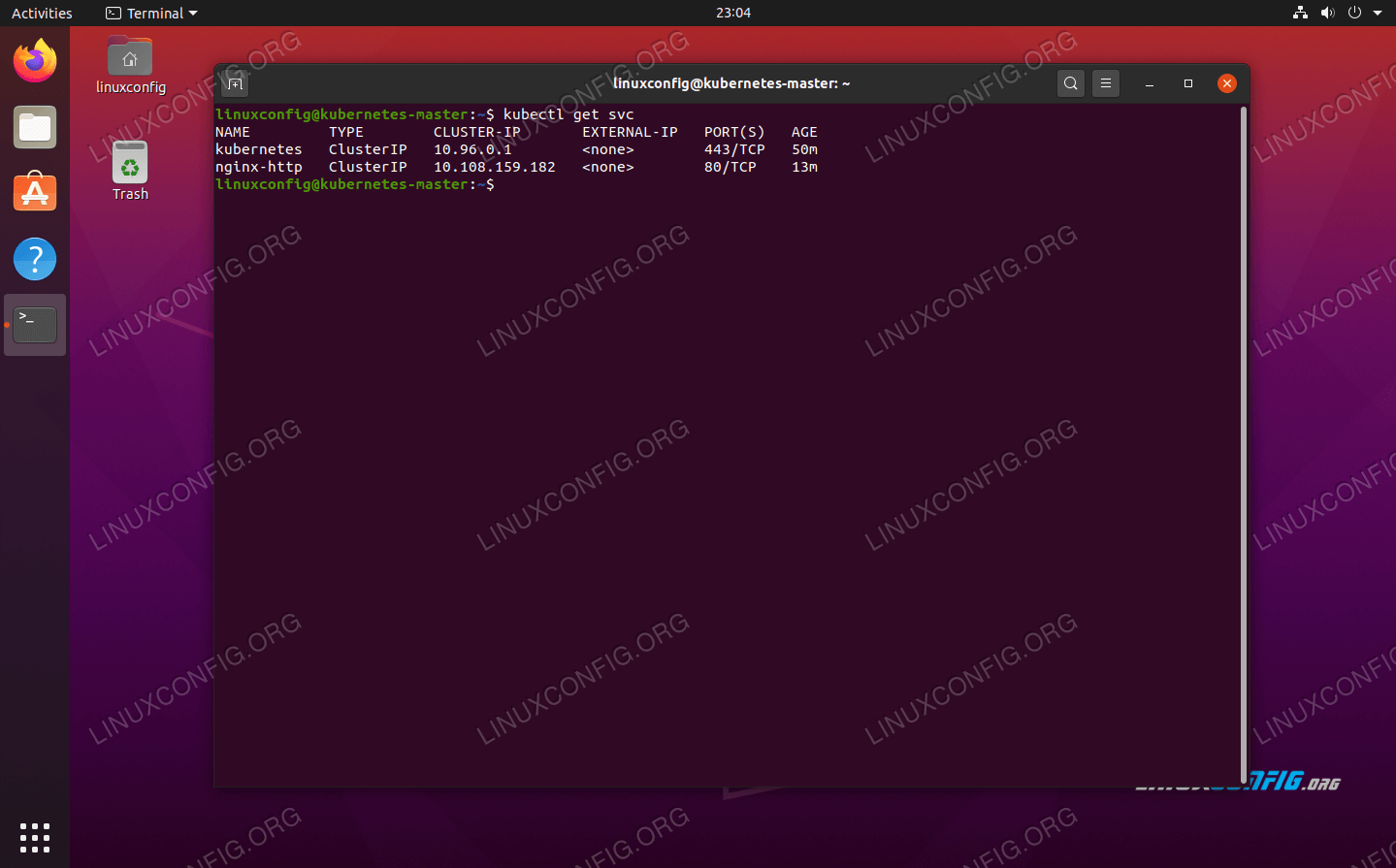 Displays what containerized services are running on the Kubernetes cluster

In this article, we learned how to setup Kubernetes to deploy containerized applications on Ubuntu 20.04 Focal Fossa. We setup a basic cluster consisting of two hosts, a master and a worker, though this can be scaled to many more worker nodes if necessary.

We saw how to configure Docker and other pre-requisites, as well as deploy an Nginx server in our new cluster as a proof of concept. Of course, this same configuration can be used to deploy any number of containerized applications.