A properly configured firewall is one of the most important aspects of the overall system security. By default Ubuntu comes with a firewall configuration tool called UFW (Uncomplicated Firewall).

UFW is a user-friendly front-end for managing iptables firewall rules and its main goal is to make managing iptables easier or as the name says uncomplicated. Ubuntu’s firewall is designed as an easy way to perform basic firewall tasks without learning iptables. It doesn’t offer all the power of the standard iptables commands, but it’s less complex. 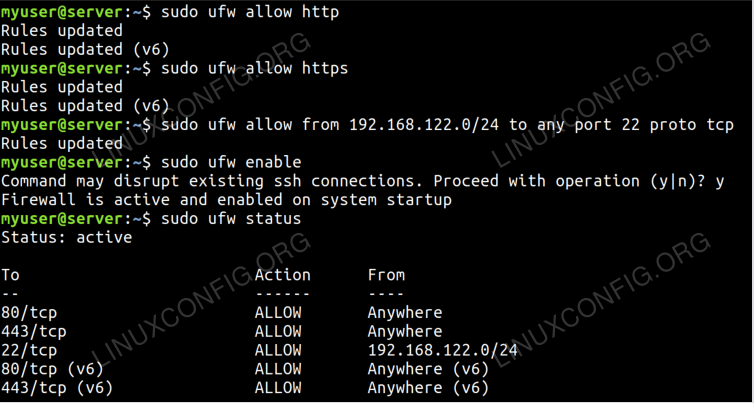 The Linux kernel includes the Netfilter subsystem, which is used to manipulate or decide the fate of network traffic headed into or through your server. All modern Linux firewall solutions use this system for packet filtering.

The kernel’s packet filtering system would be of little use to administrators without a userspace interface to manage it. This is the purpose of iptables: When a packet reaches your server, it will be handed off to the Netfilter subsystem for acceptance, manipulation, or rejection based on the rules supplied to it from userspace via iptables. Thus, iptables is all you need to manage your firewall, if you’re familiar with it, but many frontends are available to simplify the task.

UFW, or Uncomplicated Firewall, is a front-end to iptables. Its main goal is to make managing your firewall drop-dead simple and to provide an easy-to-use interface. It’s well-supported and popular in the Linux community—even installed by default in a lot of distributions. As such, it’s a great way to get started securing your sever.

Uncomplicated Firewall should be installed by default in Ubuntu 18.04, but if it is not installed on your system, you can install the package by using the command:

Once the installation is completed you can check the status of UFW with the following command:

If your server is configured for IPv6, ensure that UFW is configured to support IPv6 so that will configure both your IPv4 and IPv6 firewall rules. To do this, open the UFW configuration with this command:

Then make sure IPV6 is set to yes, like so:

Save and quit. Then restart your firewall with the following commands:

Now UFW will configure the firewall for both IPv4 and IPv6, when appropriate.

The default polices are defined in the /etc/default/ufw file and can be changed using the sudo ufw default <policy> <chain> command.

Firewall policies are the foundation for building more detailed and user-defined rules. In most cases the initial UFW Default Policies are a good starting point.

When installing a package with the apt command it will add an application profile to /etc/ufw/applications.d directory. The profile describes the service and contains UFW settings.
You can list all application profiles available on your server using the command:

Depending on the packages installed on your system the output will look similar to the following:

To find more information about a specific profile and included rules, use the following command:

As you can see from the output above the OpenSSH profile opens port 22 over TCP.

If we turned on the firewall , it would by default deny all incoming connections. Hence you need to allow/enable the connections depending your needs. The connection can be open by defining the port, service name or application profile.

The command for allowing connection to a subnet of IP addresses:

To allow access on a specific port and only to specific network interface you need to use following command:

To deny all connections from a subnet and with a port:

Firewall logs are essential for recognizing attacks, troubleshooting your firewall rules, and noticing unusual activity on your network. You must include logging rules in your firewall for them to be generated, though, and logging rules must come before any applicable terminating rule.

The log will also in /var/log/messages, /var/log/syslog, and /var/log/kern.log

Tere are two different ways to delete UFW rules, by rule number and by specifying the actual rule.
Deleting UFW rules by rule number is easier especially if you are new to UFW. To delete a rule by a rule number first you need to find the number of the rule you want to delete, you can do that with the following command:

To delete rule number 2, the rule that allows connections to any port from the IP address 192.168.1.104, use the following command:

The second method is to delete a rule by specifying the actual rule.

If for any reason you want to stop UFW and deactivate all rules you can use:

Resetting UFW will disable UFW, and delete all active rules. This is helpful if you want to revert all of your changes and start fresh. To reset UFW use the following command:

UFW is Developed to ease iptables firewall configuration and provides a user-friendly way to create an IPv4 or IPv6 host-based firewall. There are many other firewall utilities and some that may be easier, but UFW is a good learning tool, if only because it exposes some of the underlying netfilter structure and because it is present in so many systems.