Docker Swarm is a container orchestration and clustering tool to manage Docker hosts, and is a part of Docker Engine. It’s a native clustering tool provided by Docker which provides high-availability and high-performance for your application.

The primary objective of Docker Swarm is to group multiple Docker hosts into a single logical virtual server—this ensures availability and high performance for your application by distributing it over a number of Docker hosts instead of just one.

The cluster management and orchestration features embedded in the Docker Engine are built using swarmkit.

A swarm consists of multiple Docker hosts which run in swarm mode and act as managers (which manage membership and delegation) and workers (which run swarm services). A given Docker host can be a manager, a worker, or perform both roles. When you create a service, you define its optimal state like number of replicas, network and storage resources available to it, ports the service exposes to the outside world etc. If a worker node becomes unavailable, Docker schedules that node’s tasks on other nodes. A task is a running container which is part of a swarm service and managed by a swarm manager.

One of the key advantages of swarm services over standalone containers is that you can modify a service’s configuration, including the networks and volumes it is connected to, without the need to manually restart the service. Docker will update the configuration, stop the service tasks with the out of date configuration, and create new ones matching the desired configuration.

Before installing the necessary Docker packages for the swarm cluster, we will configure the hosts file on all the Ubuntu nodes.

Edit the /etc/hosts file across all three nodes via gedit or vim and do the following changes:

After modifying with the above details in the hosts file, check the connectivity with ping between all the nodes.

To create the swarm cluster, we need to install docker on all server nodes. We will install docker-ce i.e. Docker Community Edition on all three Ubuntu machines.

Before you install Docker CE for the first time on a new host machine, you need to set up the Docker repository. Afterward, you can install and update Docker from the repository. Perform all the below steps across all three Ubuntu Nodes.

Install packages to allow apt to use a repository over HTTPS:

Use the following command to set up the stable repository:

After the installation is complete, start the docker service and enable it to launch every time at system boot.

To configure docker to run as a normal user or non-root user, run the following command:

Now, login as designated user and run the docker hello-world to verify.

Upon successful run it will give the below output Initialize the Docker Swarm mode by running the following docker command on the ‘dockermanager’ node.

‘join token’ has been generated by the ‘dockermanager’ which will be required to join the worker nodes to the cluster manager.

Now, to join the worker nodes to the swarm, we will run the docker swarm join command on all worker nodes which we received in the swarm initialization step:

To see the node status, so that we can determine if the nodes are active/available etc, from the manager node, list all the nodes in the swarm:

If at any time, you lost your join token, it can be retrieved by running the following command on the manager node for the manager token:

The same way to retrieve the worker token run the following command on the manager node:

In this step, we will create and deploy our first service to the swarm cluster. The new service nginx web server will run on default http port 80, and then expose it to the port 8081 on the host machine. We will create this nginx service with 2 replicas, which means that there will be 2 containers of nginx running in our swarm. If any of these containers fail, they will be spawned again to have the desired number that we set on the replica option.

After successful deployment of the service you can see the below output :

Lists the tasks running as part of specified services on Swarm Cluster.

If we need to check whether nginx service is working fine, either we can use the curl command or check in the browser on host machine for the nginx web server welcome page. 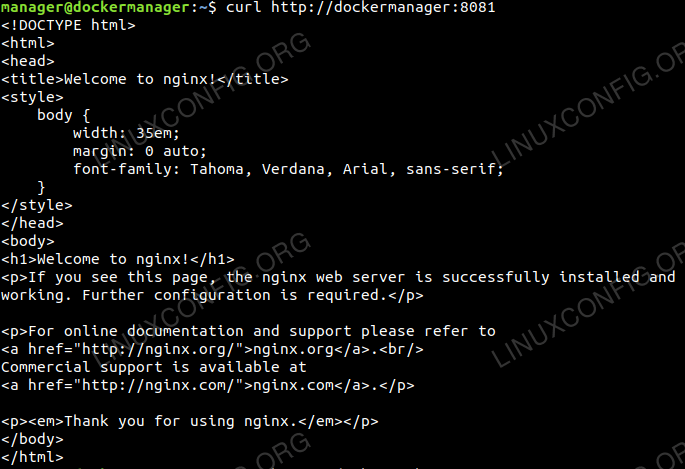 Now , if we need to scale the nginx service we will make 3 replicas and to do that run the following command on manager node:

Service Scaling for the desired number of replicas.

We can use docker service inspect command to check the extended details of a deployed service on swarm. By default, this renders all results in a JSON array.

Docker has become an extremely popular way to configure, save, and share server environments using containers. Because of this, installing an application or even a large stack can often be as simple as running docker pull or docker run. Separating application functions into different containers also offers advantages in security and dependency management.