Does your Firefox web browser have a large cache of temporary files? Do you have an embarrassing web browsing history? Has it been a while since you last cleared your Firefox cache? If you answered yes to any of the above questions, you’ve come to the right guide. 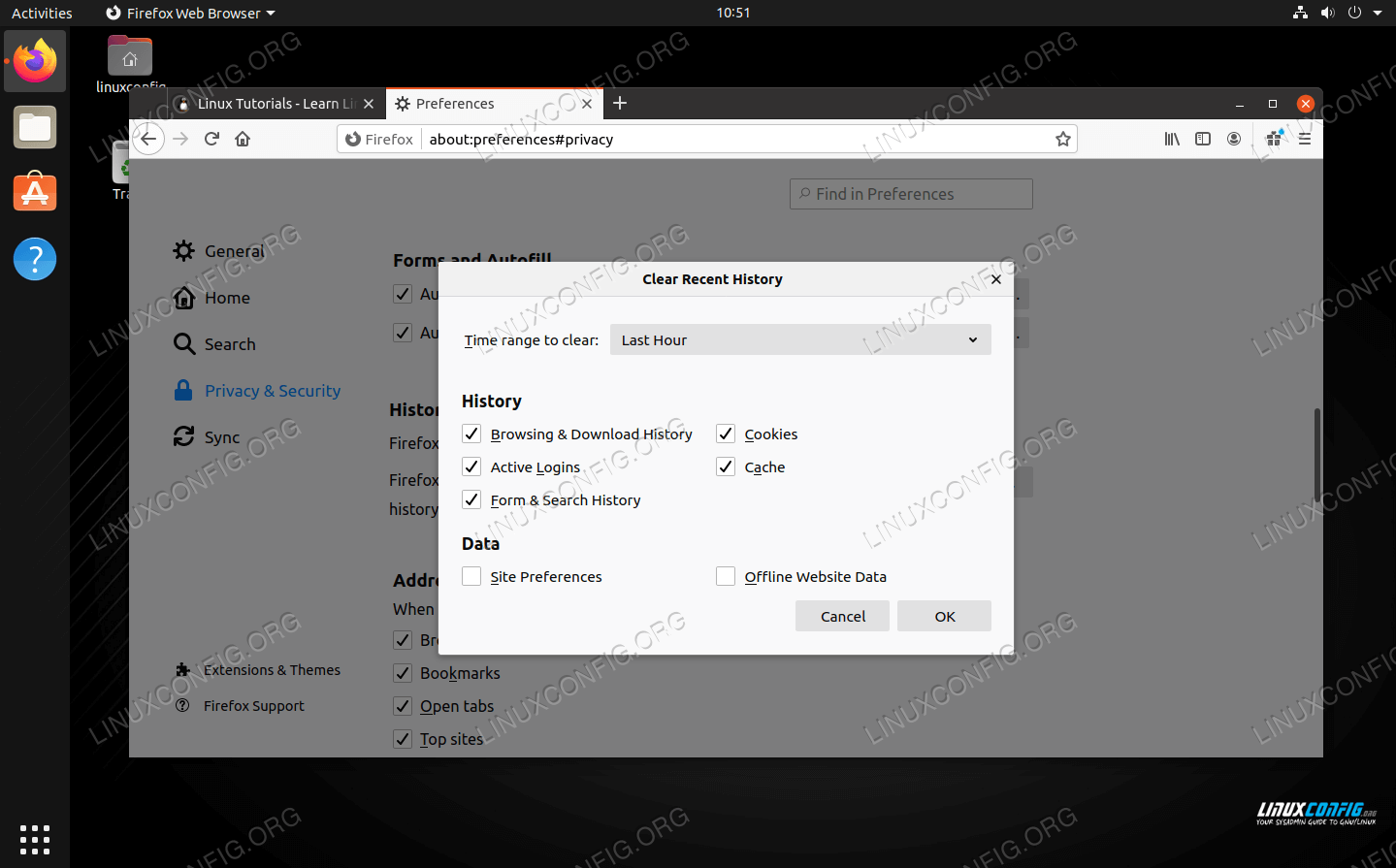 Clearing the cache in Firefox on Linux

To clear the cache in Firefox, which can optionally include browsing history, cookies, active logins, and form history, open Firefox on your system and follow along with the steps below.

That’s all there is to it. Notice also that you can configure Firefox to clear the cache, cookies, and/or web browsing history automatically each time the browser is closed. You can now exit Firefox or resume your browsing activities after you’ve finished clearing the cache and other data if you chose to.

When clearing the cache via Firefox’s GUI menus, all it’s really doing is deleting files from your computer. These same files can be deleted without Firefox, too, such as via the command line. There are actually quite a few things you can do with Firefox from the Linux command line.

Firefox stores the cache (temporary files such as images) in one directory, and your browsing history (websites visited, form history, etc.) inside another directory as .sqlite files.

Depending on your Firefox installation, these directories will be in a predictable place across most Linux systems. If Firefox was installed by default on your system or installed via your system’s package manager, you can use the following commands to clear Firefox’s cache.

On Ubuntu, Debian, Arch Linux, Manjaro, and any derivatives of those distributions, these commands will work:

On CentOS, Fedora, and Red Hat, these commands will work:

As you can see, the directory names differ just a little between some popular distros, so we have to change the command accordingly. There is a chance that your system uses a different structure altogether, in which case you’d have to improvise and change the directories as needed. The same can be said if you installed Firefox manually into a different location.

If clearing the cache for a user other than the one to which you’re currently logged in, be sure to specify the home directory as an absolute path, such as /home/linuxconfig/.cache/ ... instead of ~/.cache/ ....

Restart Firefox in order for all these changes to take effect. To configure your system to clear these files automatically, you could schedule a cron job.

It’s good practice to clear Firefox’s cache every once in a while, just to declutter the hard drive and get rid of old session cookies, etc. In this guide, we saw two different methods for clearing the cache in Mozilla Firefox on Linux. The GUI method is the traditional way, but we also learned how deleting the appropriate files via command line can accomplish the same task. Depending on your situation, one method might work better for you than another. Both methods can be used to automatically clear the cache at regular intervals for you.