How to check disk space with df and du on Linux

Df and du are two very useful utilities which are normally installed by default in all Linux distributions. We can use the first one to obtain an overview of the used and available space on mounted filesystems; the second, instead, is very useful to obtain a detailed report about the space used by files and directories. In this article we take a look at their usage, and we see what are the most common used options which can be used to modify their behavior. 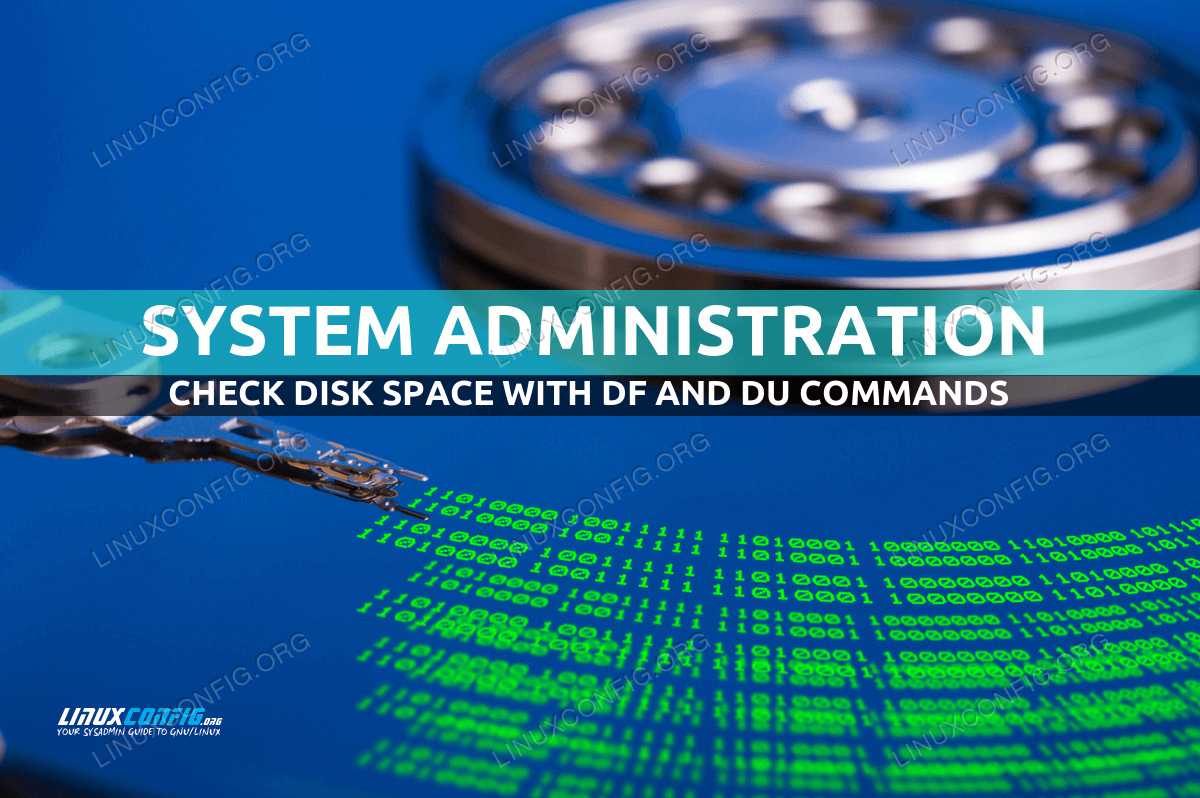 How to check disk space with df and du on Linux

The df utility is used to display, among the other things, filesystems available and used disk space. If the program is called without any argument, all mounted filesystem are included in the report:

Df accepts one or more file paths as arguments. When those arguments are provided only the information about the filesystem on which the files reside will be reported. For example, if we specify /home/egdoc/.bashrc as file argument, we will get a report about the filesystem mounted on /home, which, in this case, is on a separate LVM logical volume:

If we pass a mountpoint as argument to the command, information about the mounted filesystem are reported instead.

As you can see in the output of the previous examples, filesystem sizes and used space are reported in 1K-blocks, so they are not very human friendly. To get those information in a format more understandable by us humans, we can invoke df with the -h option, which is the short for --human-readable. When the option is provided, the sizes are reported in power of 1024, with a convenient suffix:

Including or excluding filesystems

To exclude or include certain filesystem types from the output of the command, we can basically use two options: -t (--type) and -x (--exclude-type). The option names are pretty self explanatory: we can use the former to specify the filesystem type which should be included in the output. For example, to get information only about ext4 filesystems, we would run:

The latter option, -x, let us specify the filesystem type which should be excluded from the output of df, instead. To display all filesystems except the ext4 ones, we would run:

The du utility is used to report directories and file space usage. When invoked with no arguments, the utility (recursively) displays the list of all the directories existing in the current position, together with their space usage (the output below is truncated for convenience):

Just like in the case of df, we can make the du command produce a more human-readable output by using the -h option, short for --human-readable. When the option is used, for example, the output above becomes:

In case we want to visualize only the summary of the used disk space in a certain directory, we can use the -s option, which is the short for --summarize. If we invoke the command with this option, in the same working directory as before, we obtain the following result:

Including files and their size in the output of du

By default, as we can observe, only directories are reported in the output of the du command. To include also standard files in the output, we can use the -a option (short for -all). If we re-launch the command with this option we obtain the following:

As you can see, the .Xauthority and .bashrc files (and the respective space usage), were included in the (truncated) output.

We have basically two ways to specify the files and directories which should be excluded from the output of the du command: the first one is by invoking the program with the --exclude option. This option takes a pattern as argument; all the files and directory names matching that pattern will be excluded. Just as an example, suppose we want to exclude all hidden files from the output of du. We know hidden files are named starting with a dot, therefore we could run:

The second way we can use to specify pattern that should be used for file and directory exclusions, is to use the -X option (--exclude-from). This option takes the name of a file as argument: is in that file that we specify the patterns to be matched. Let’s create it. We will call it exclusions.txt:

With our file in place we can run:

As you can see we obtained the same result as above, except for the fact that the size of the exclusions file (exclusions.txt) is now included in the count of the space used by the current directory (the last line of the output: 24K vs 28K).

Obtaining a “grand total” of the used space

The du utility accepts multiple files and directories as its arguments. For example we can use it to obtain a summary of the space used by the /boot and /etc directories:

In the example above we ran du with sudo in order to grant it access to some restricted directories. As you can see the summary of the space usage is reported for each directory we specified. What if we want to obtain a “grand total”, so to have the sum of the space used by the two directories? To achieve that we can use the -c option (short for --total). Our command becomes:

In this article we learned to use df and du, two utilities installed by default in all Linux distributions. They are very useful to check the available and used space in mounted filesystems, and to obtain detailed information about the size of file and directories. We covered the most common use cases; for more detailed information, as always, check the manuals!