Dd is a very powerful and useful utility available on Unix and Unix-like operating systems. As stated in its manual, its purpose is to convert and copy files. On Unix and Unix-like operating systems like Linux, almost everything is treated as a file, even block devices: this makes dd useful, among the other things, to clone disks or wipe data. The dd utility is available out of the box even in the most minimal installation of all distributions. In this tutorial we will see how to use it and how we can modify its behavior by using some of the most commonly used options to make your Linux system administration job easier. 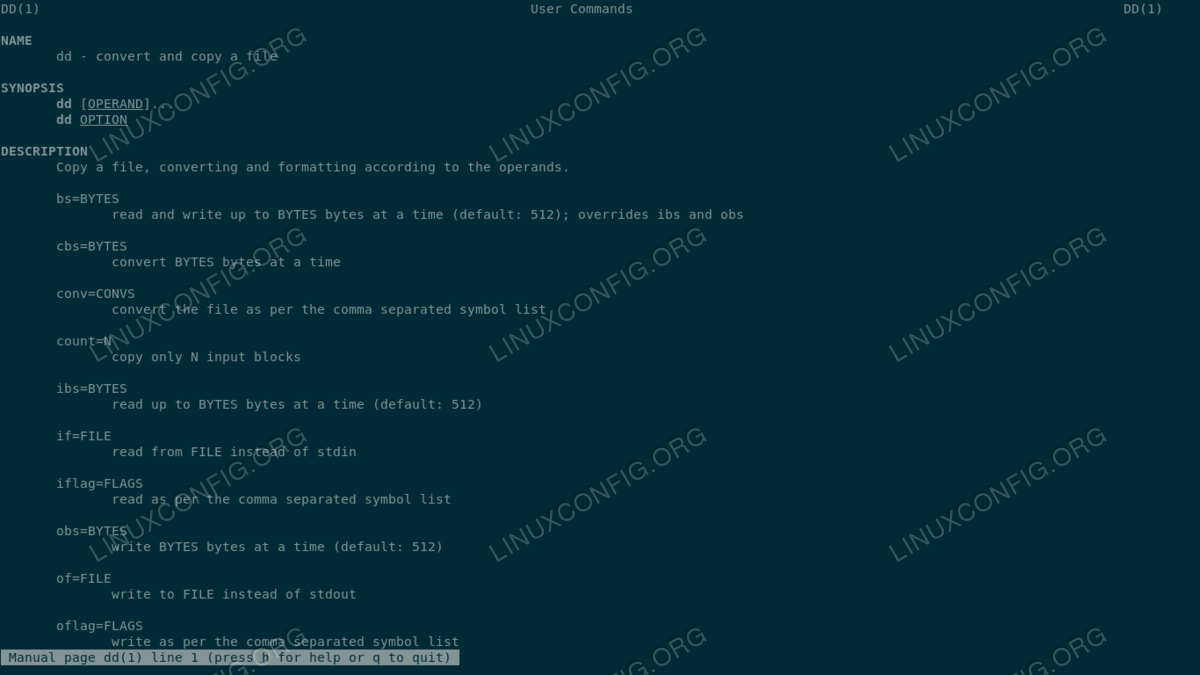 The basic syntax of dd is very simple. By default the program reads from standard input and writes to standard output. We can, however, specify alternative input and output files by using respectively the if and of command line options. Here dd differs from the vast majority of shell commands, since doesn’t use the standard --option or -o  syntax for options.

Let’s see an example of dd usage. One of the most typical use cases for the utility is the backup of the master boot record: the first sector on a legacy MBR partitioned system. The length of this sector is usually 512 bytes: it contains the stage 1 of the grub bootloader and the disk partition table. Suppose we want to backup the MBR of /dev/sda disk, all we have to do is to invoke dd with the following syntax:

Let’s analyze the command above. First of all we prefixed the actual dd invocation with sudo command, in order to run the command with administrative privileges. This is needed to access the /dev/sda block device. We then invoked dd specifying the input source with the if option and the output file with of. We also used the bs and count options to specify respectively the amount of data that should be read at a time, or block size, and the total amount of blocks to read. In this case we could have omitted the bs option, since 512 bytes is the default size used by dd. If we run the command above, we will see that it produces the following output:

The output above shows us the amount of records read and written, the amount of data copied, the amount of time in which the task was completed and the transfer speed. We now should have a clone of the MBR sector, stored in the mbr.img file. Obviously the file suffix has no real meaning on Linux, so the use of the “.img” one is completely arbitrary: you may want to use “.dd” to let the filename reflect the command that was used to create the file.

Skipping blocks when reading and writing

There are cases in we may want to skip a certain amount of block sizes when reading from or writing to a file. In such cases we have to use the skip and seek options, respectively: they are used to skip the specified blocks of data, at the start of input and at the start of output.

An example of such a situation is when we want to backup/restore the hidden data between the MBR and the first partition on the disk, which usually starts at sector 2048, for alignment reasons.  The 2047 sectors of this area usually contain, on a legacy MBR partition setup, the stage 1.5 of the grub bootloader. How can we instruct dd to clone just this area, without including the MBR? All we need to do is to use the skip option:

In this case we instructed dd to copy 2047 blocks of 512 bytes from the /dev/sda disk starting from the second one. In the opposite situation, when we want to restore the cloned data and write it back in the same disk zone, we want to use the seek option, which skips the specified number of blocks at beginning of the output:

In this case we instructed dd to copy data from the hidden-data-after-mbr and to write it on the /dev/sda block device starting from the second block.

Compressing the data read by dd

As we already said before, one of the most common operations performed with dd is disk cloning. The dd command produces a perfect clone of a disk, since it copies block devices byte by byte, so cloning a 160 GB disk, produces a backup of  the exact same size. When cloning a disk to a file, we can however pipe the data read by dd though compression utilities like gzip, to optimize the result and reduce the final file size. Say for example we want to create a clone of the entire /dev/sda block device, we could write:

In the example above we instructed dd to read from the /dev/sda device, and we also changed the block size to 1M, which can give us better performance in such situation. We then piped the data, further processing it with the gzip program that we invoked with the -c (short for --to-stdout) and -9 option which instructs the program to use the maximum available compression. Finally, we redirected the output to the “sda.dd.gz” file. By the way, if you want to learn more about redirections you can read our article on the subject.

Another dd use case, is the wiping of a device. There are many situations in which we may need to perform such operation: we may want to sell a disk, and be sure its previous content is completely erased for obvious privacy reasons, or we may want to wipe data before setting up encryption. In the first case it would be enough to overwrite the disk with zeros:

The above command instructs dd to read from the /dev/zero device which provides null characters and write them to the devices until it is completely filled.

Before setting up an encryption layer on our system we may want to fill the disk with random data instead, to render the its sectors which will contain data indistinguishable from the empty ones and avoid metadata leaks. In this case we want to read data from the /dev/random or /dev/urandom devices:

Both the commands will require a significant amount of time to finish, depending on the size and type of the block device in question and the source of random data used, /dev/random being slower (it blocks until it doesn’t gather enough environmental noise), but returning higher quality random data than /dev/urandom.

The conv options of dd is used to apply data conversions. The options must be provided with a comma separated list of symbols as arguments. Here some of the most used ones:

A typical case in which we may want to run dd together with the conv=sync,noerror option, is when cloning a disk which contains damaged sectors. In such a case the noerror option will make dd continue running even if it a sector cannot be read successfully, and the sync option will make so that the amount of data failed to be read its replaced by NULs, so that the length of the data is preserved even if the actual data is lost (since it’s not possible to read it).

In this tutorial we learned to use the very powerful dd command. We saw some of the typical cases the program is used in, such as disk cloning, and we learn to know its syntax and the more important options we can use to modify its behavior. Since dd is a very powerful utility, it must be used with extreme attention: just by switching the input and output target, one can, in some situations, completely destroy data on a disk.