Branching allows git to track multiple lines of development. This essentially allows you to have multiple versions of your project in development at the same time. For example, many projects will choose to have a stable master branch while new features or bug fixes are implemented in a development or testing branch. Once the project organizers are satisfied that the changes made in the development branch have reached the required level of maturity, they may choose to merge those changes into the master branch.

For many larger projects this cycle will often be repeated indefinitely. The benefit of implementing this strategy is that it helps to reduce the introduction of mistakes into the primary version of the codebase and therefore reduces the occurrence of bugs and other potential adverse behavior in the software. Simultaneously, it allows developers to test new ideas without restrictions. Therefore, they may continue to creatively contribute to the project in an efficient manner.

Let’s examine a quick example of how to work with branches, continuing with the initial git project we created in the previous Git tutorial for beginners. First, make projectname your current working directory. Now let’s create a branch specifically to work on the documentation for out project. Issue the following command to make this new branch.

Now, lets take a look at all of our branches.

Simply issuing the git branch command as above displays a list of all the branches in our git repo. You will notice that the first branch is called master by default. In our case, we see the master branch and our newly created docs branch. Note that the current branch we are working in is marked by * and it is still the master branch. To begin working in the docs branch we need to checkout the branch.

Now that we have checked out the docs branch, any changes we make will affect that branch alone and the master branch will remain untouched and in the exact state that it was in prior to checking out the docs branch.
Lets create a readme.txt file for our project.

Now that we have a descriptive readme file for documentation, let’s stage it and commit it just like we learned how to do in the previous Git tutorial for beginners article.

Now that we have committed the change in our docs branch, we can switch back to the master branch by checking it out.

You will notice that the master branch does not have the readme.txt file because at the moment it only exists in the docs branch. This demonstrates how the two branches represent two distinct states of development.

List the directory contents and observe that the master branch now contains the readme.txt file.

then we see that the log history of the two branches has been merged together as well. 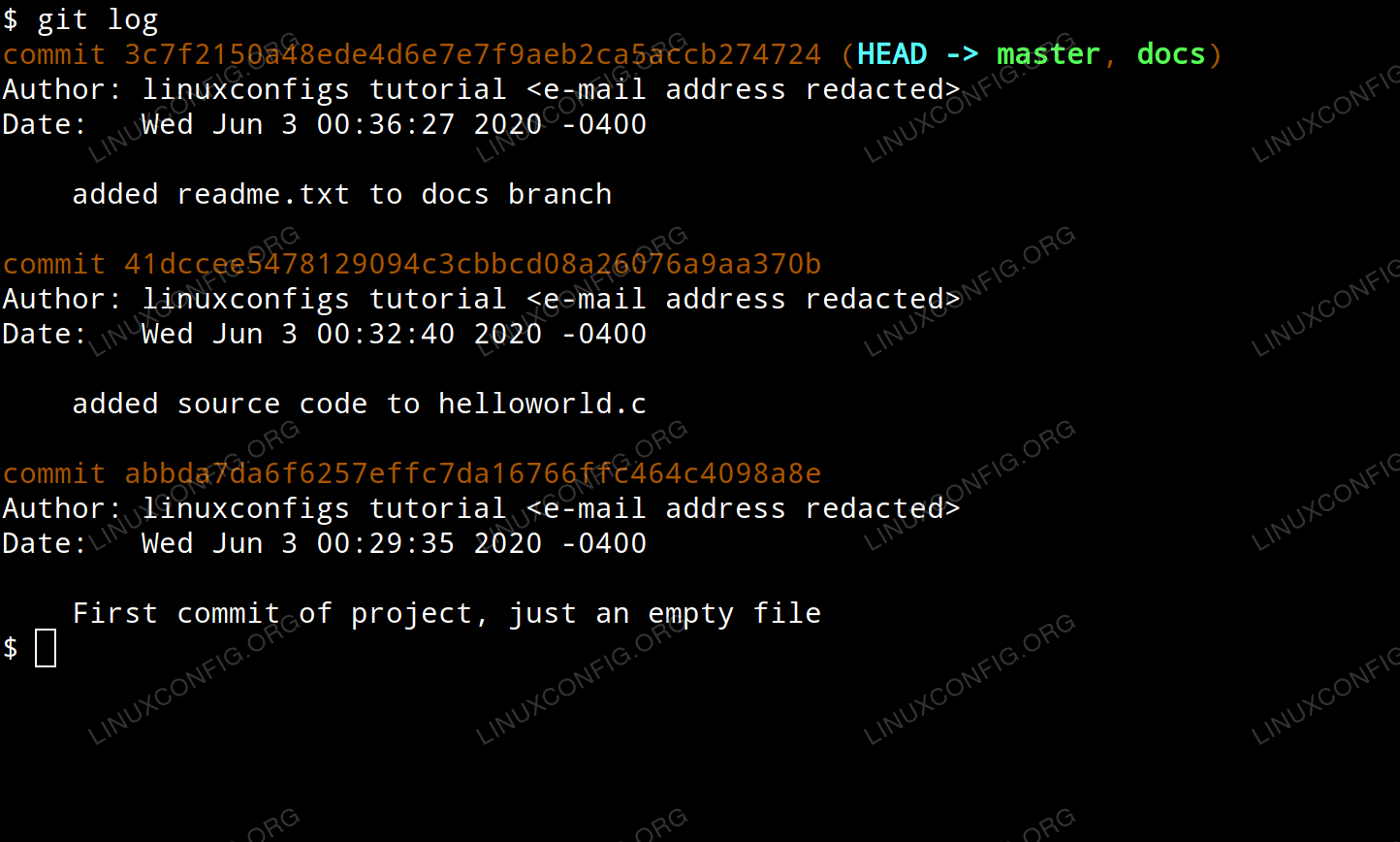 Now that we have completed our documentation and merged the docs branch with the master branch we can safely delete the docs branch if we want. To do so simply add the -d flag to the git branch command.

Now we only have one branch in our project again and it reflects all of the changes that we have made throughout it; including the addition of a readme file.

We might want to be able to easily see and refer to a specific commit without having to use its commit id. To accomplish this we can use the git tag command to give a commit a memorable name. In our case, let’s name our fist commit init, our second commit source and our last commit readme so that if we ever need to in the future we can easily refer to the commits where we initialized the project, added source code, and added a readme file respectively.

You may notice that for the last command we did not have to specify a commit id. This is because that commit is our current HEAD and the current HEAD is named by default if a commit id is not provided. We could have provided the commit id if we wanted, but it would have been unnecessary.

If we use the tag command without any arguments it will give us a list of all the tags we are using.

If we want to see all of the tags along with the other commit information we can issue the familiar log command: 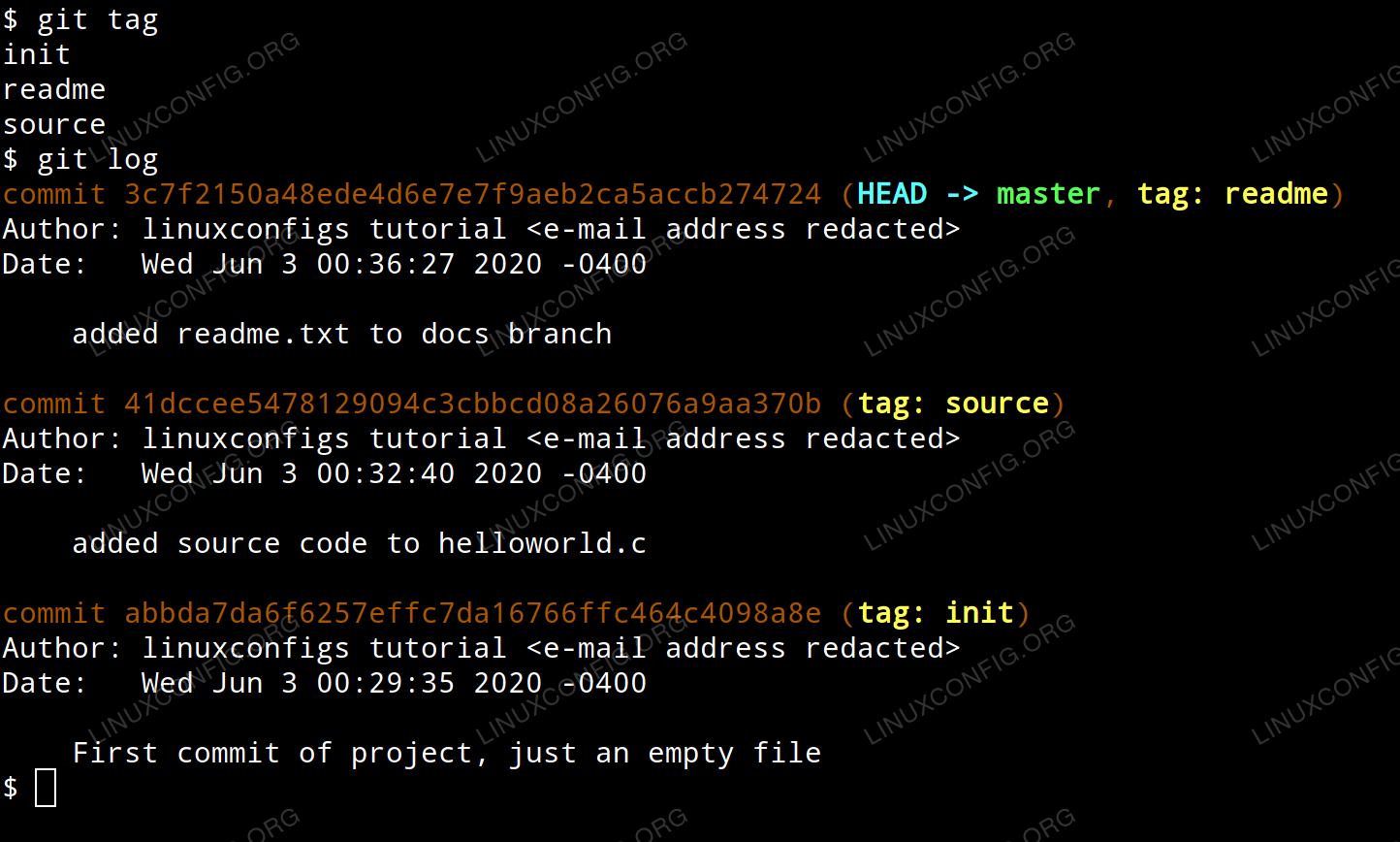 From now on when we want to reference these commits we can use their tags in place of their commit ids. Just like we can checkout a branch, we can also checkout a specific commit. If we decided we wanted to checkout our first commit, we could now check it out using its tag.

You can also create a new branch and switch to it with the checkout command as follows.

Use whichever you prefer, but it is important to note that according to git’s man pages the switch command is experimental and its functionality may change in the future.

We are using a very simple example in order to focus on git itself rather than the code we are managing. As a result, the tags we used reflect a simple naming scheme based on the introduction of features. However, larger projects will typically use tags as a means to keep track of versioning by tagging commits that correspond with specific release point numbers.

For example, version1.0,
version2.0 etc. It is also important to note that when you are pushing your changes to a remote server, new branches and tags are not pushed by default and must be specifically pushed using the following commands.

To see all other branches on the remote repo issue the following command using the -a flag which shows all local and remote branches.

Once you checkout a remote branch it will be downloaded to your local repo and you can continue to work on it locally until you want to push the changes you made to the branch back to the server.

After working through the above examples I encourage you to continue playing around with branches and tags until working with them begins to feel intuitive to you. If you don’t have access to a remote repository where you can practice things like pushing branches, pushing tags and checking out remote branches then I encourage you to create a free GitHub account and select the option to create a private repo there.

In fact, I would recommend doing so even if you do have access to other remote repos. If you make a mistake on your own private GitHub account while you are learning then there is no major harm done. I would recommend that you start to use git collaboratively once you start feeling super comfortable with it.

After following this article and the Git tutorial for beginners guide you should now feel comfortable installing git, configuring git, working with branches, the concept of versioning, tagging and using git to work with both local and remote repositories. You now have the working knowledge to take the power and efficiency of git further as a distributed revision control system. Whatever you may be working on, I hope that this information changes the way that you think about your workflow for the better.