Fedora 24 brings with it a number of technical improvements, software upgrades, and under the hood. It’s clear that the Fedora developers have been working closely with upstream sources to tightly integrate advances in everything from the kernel to GNOME, Systemd, NetworkManager, and GCC6 which have all been forged into a powerful core. However, that’s about where it ends.

When it comes to a being a full fledged desktop distribution, Fedora 24 falls a bit short, and that’s mostly due to the Fedora project’s limited repositories. 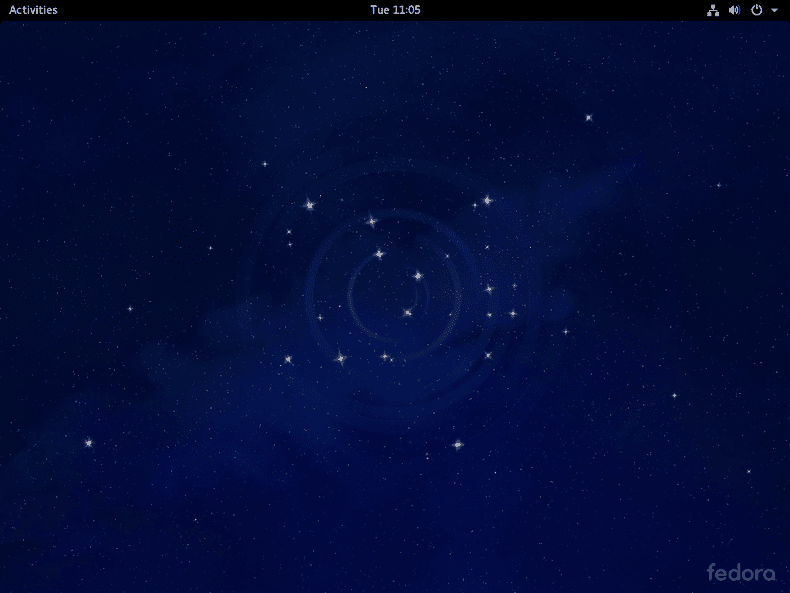 The Anaconda installer is an absolute breeze, and should be applauded for its ease of use. The Fedora/RedHat developers behind Anaconda have managed to create an installer that is both graphically pleasing and intuitive and retains as much flexibility and functionality as possible. The drive formatting menus are especially impressive and allow for some excellent drive customization without ever having to touch the command line. Another great feature of the Anaconda installer is the software selection menu. There are a wide range of installation types as well as an even wider range of package collections that can make setting up a new system a smooth, pain free, process. With the ability to pick specific package groups in the install, Fedora effectively eliminates the need to install a load of packages once the install has completed. It’s a minor time saver, but it’s very nice to have. 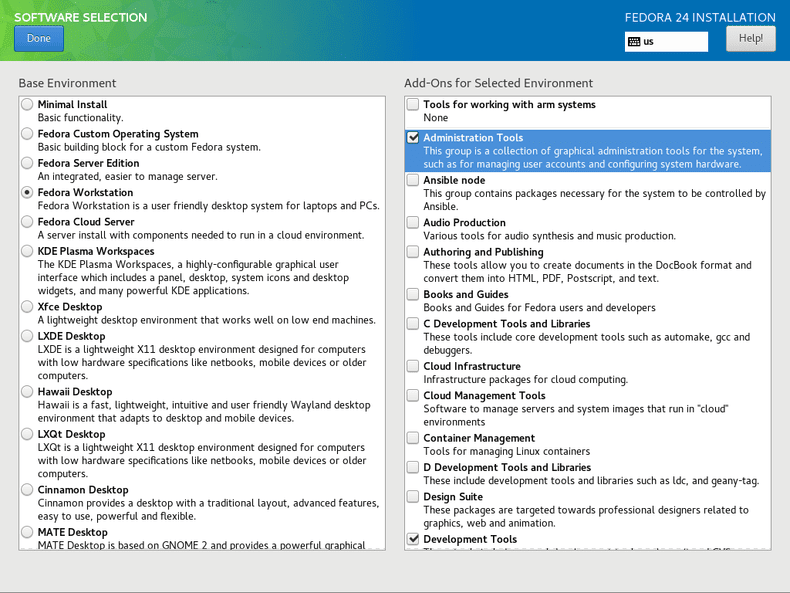 In Fedora 24 Workstation, GNOME 3.20 takes center stage, as well it should. Over the past several releases, GNOME 3 has gotten progressively more polished. With release 3.20, it feels more like a truly modern desktop environment worthy of any competition.

All of GNOME’s animation is smooth, fluid, and feels natural. Seeing how clunky and unnatural feeling the early iterations of GNOME 3 felt, this is a welcome maturation and seems to be what the developers had originally intended. The overall impression given by GNOME 3.20 is clean and cohesive, and GTK3 applications fit seamlessly with their surroundings.

GNOME 3.20 also features some nice quality of life improvements like shortcut overlay windows, media controls in the top bar of the shell, better searching through Nautilus, and the ability to run system upgrades from the software center. On the topic of the software center, despite its improvements, it may still be the weakest part of the GNOME experience. It’s slow and relatively unresponsive, with some loading times well into the tens of seconds. There isn’t much the average user hates more than seeing a spinning wheel where what they’re looking for should be. In testing Fedora 24, there was one major GNOME crash that killed the shell and even locked up the CLI after the shell dropped. It’s hard to say if it was GNOME or Systemd’s fault, but it should be noted that there may still be some instabilities present.

That said, the overall GNOME experience is a positive one, and it is beautifully integrated into Fedora, as always.

GNOME 3.20 is not the only technical improvement to make its way to Fedora 24. First and foremost, Fedora 24 is running kernel 4.5 by default. GCC and glibc also got a version boost with GCC jumping to version 6 and glibc moving to 2.23. Systemd also received some changes, most notably a split from the main Systemd package with a focus on containers. 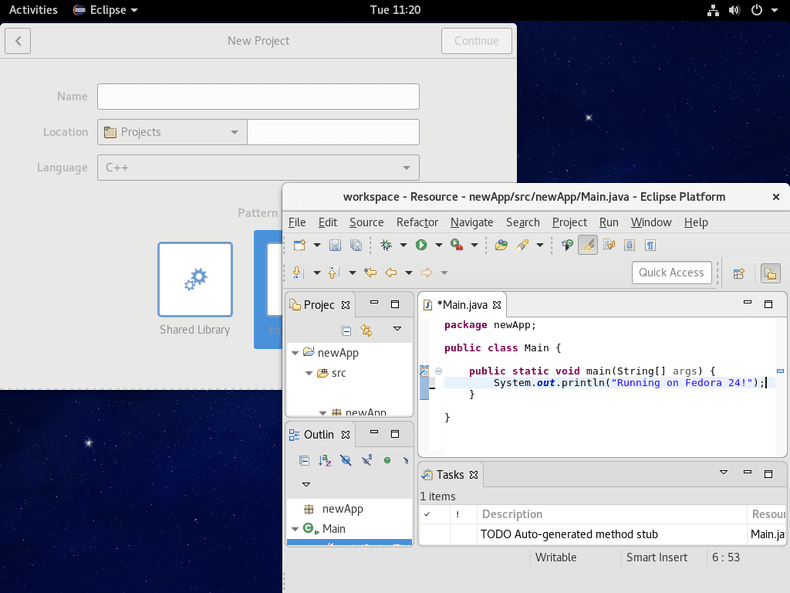 Several key programming languages also get version upgrades in Fedora 24. Fedora offers Go 1.6, Ruby 2.3, Python 3.5, and Node.js(No, it’s not a language) 5.10 by default. This alls seems to fit with Fedora’s ongoing push to make itself a solid developer platform. By offering the latest in demand tools, Fedora 24 not only keeps itself on the bleeding edge, it presents a wonderful toolbox for any developers looking to target Linux or the Web.

Now things take a bit of an odd turn for Fedora. Everything so far looks like the foundation for a wonderful Linux distribution except for one glaring problem. Fedora’s repositories are small. Fedora has made a decision to only ship free software and only offer free software in its repositories. That, in itself, is a bit limiting, but distributions like Debian get by just fine that way. Fedora, on the other hand, just doesn’t seem to have as many package choices. This goes a step further with a few really strange omissions. VLC, for example, is not packaged by the Fedora project. Kodi is another fairly ubiquitous Linux application suspiciously absent from Fedora’s repositories. It’s not just multimedia applications that aren’t making an appearance in Fedora 24. Chromium is also nowhere to be found. The one thing that is present in abundance in Fedora 24 is development tools. Aside from the previously mentioned libraries and languages, IDEs like CodeBlocks, Eclipse, and GNOME Builder are all present in their latest incarnations.

Fedora’s package deficit would be alright if there were excellent third party repositories to support users who wanted more than what’s available in the official repos. Unfortunately, as of this article, that’s not the case. RPMFusion, the usual go-to source for third party Feodora packages is virtually empty when it comes to Fedora 24. This means that any proprietary programs like Steam are also not packaged for Fedora 24 as of yet. There are also no packaged proprietary graphics drivers available for Fedora 24. These are usually found inf RPMFusion as well, but again, are absent. It is possible to install them from the manufacturers’ websites, but it is rather cumbersome and obviously not managed through the distribution’s package manager.

So, where does Fedora 24 stand? Maybe it should go back to being called Fedora Core. The most central workings of the distribution are great. They are tightly integrated, smooth, and function very well overall. As a developer workstation, it’s excellent. There is a ton of utility built in, and has many of the server, virtualization, and cloud tools to test and deploy. As a general purpose desktop is where Fedora 24 falls short. If only there were larger repositories and access to much of the software that desktop users take for granted, this distribution would be a real standout. The clunky nature of GNOME Software doesn’t help either, turning an excellent ease-of-use feature into a frustrating one. It all amounts to a situation that will turn away that average user really quickly.

If you’re a developer or a system administrator looking to get your hands on the latest Linux has to offer, check out Fedora 24. You won’t be disappointed. If you’re a desktop user looking for a reliable daily driver, Fedora 24 is probably not for you.