This error message is fairly common on any Ubuntu or any other Debian based Linux system.

The meaning of the Could not get lock message is rather simple. At the time you attempt to install new software or update your operating system, there is another software installation or software upgrade underway which runs in the background and was launched on another remote or local terminal by other user with administrative privileges. 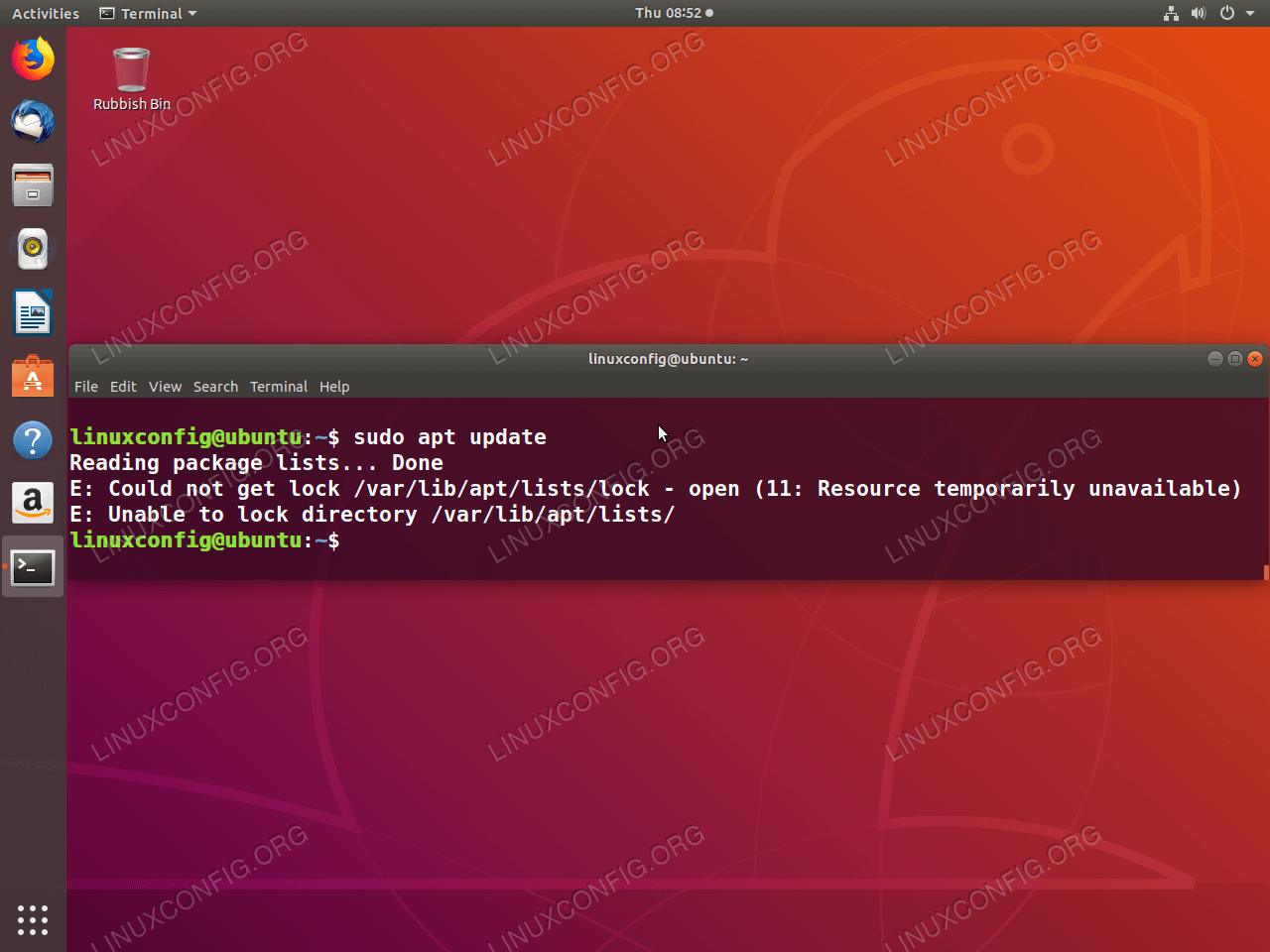 Example of E: Could not get lock /var/lib/apt/lists/lock – open (11: Resource temporarily unavailable) error message on Ubuntu 18.04

Another rather destructive cause for other related below error messages:

is that the software installation or upgrade process using either apt or dpkg command was interrupted.

The way how package management tool on Ubuntu/Debian or any other Linux operating system works is that every time package installation or update is initiated, the package management tool, in this case apt or dpkg, creates a lock file /var/lib/apt/lists/lock or var/lib/dpkg/lock to prevent concurrent execution of another software installation or update process.

On Ubuntu Linux systems the prevalent number of cases when the E: Could not get lock /var/lib/apt/lists/lock error message appears on Ubuntu Linux systems occurs because the package repository index update is executed automatically by the Ubuntu system itself in the background. This simply creates a lock file and prevents user to use the apt or dpkg tools at the same time.

SOLUTION
The simplest and the only recommended solution is to wait and let the background package management tool update finish its work and release the lock file.

Having the Ubuntu system trigger background update and preventing the user from using the apt or dpkg command can be very frustrating situation.

Once you have the file opened, switch off the Update-Package-Lists directive from 1 to 0 as shown below on Line 1:

How to find process and user holding a lock

The following steps can be used to identify the user and the process holding a lock preventing user to successfully execute the apt or dpkg command: 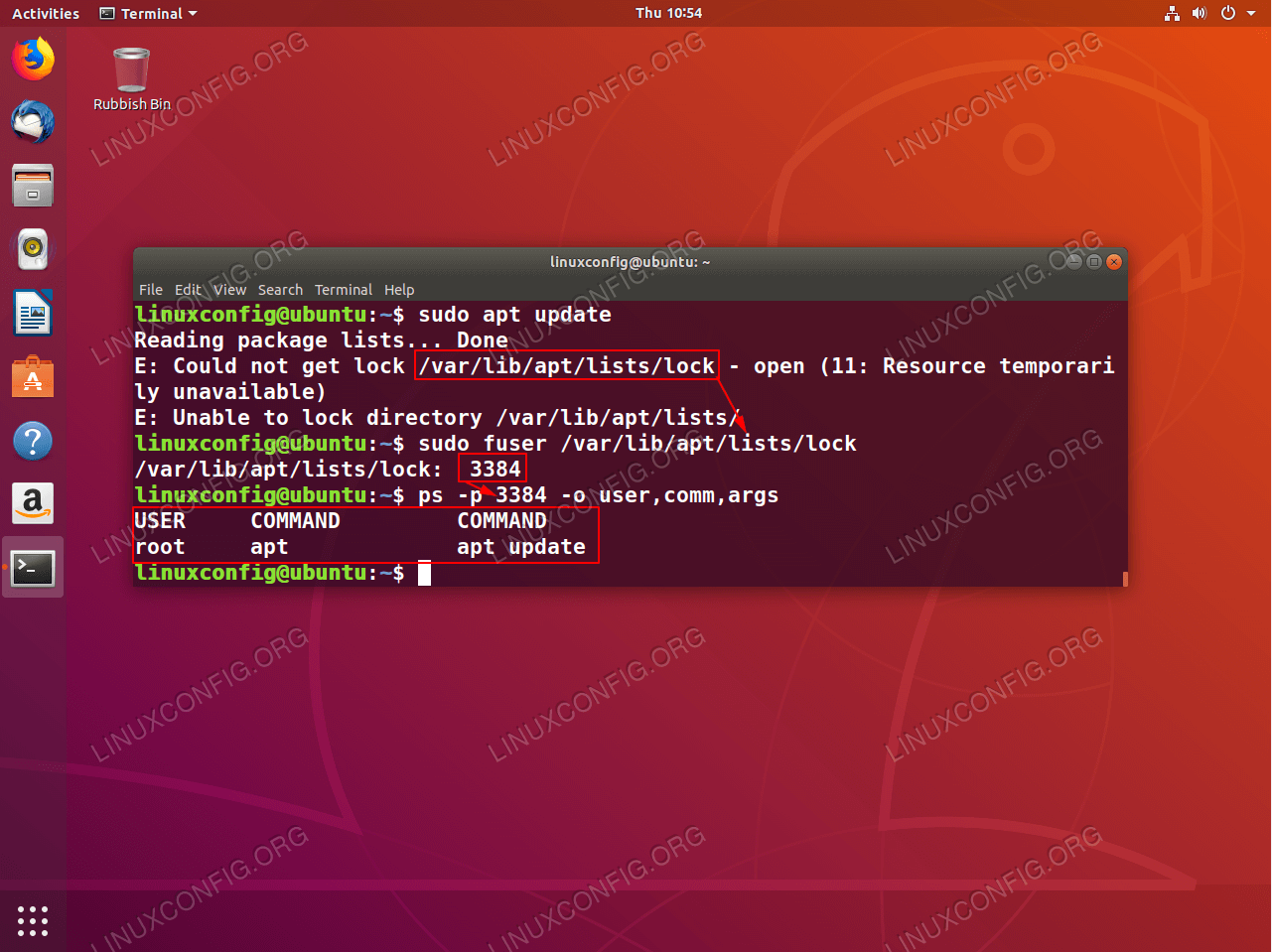 Finding the user and process responsible for holding a lock on /var/lib/apt/lists/lock file on Ubuntu Linux system.

How to unlock the “/var/lib/apt/lists/lock” lock

In the scenario that you are able to identify the user and the process holding a file lock as per the previous section, investigate further and see if you can let the process finish gracefully.

WARNING
Do not forcefully remove lock file if there is a chance to let process finish gracefully. This my harm your system and in same cases even without the option for the recovery.

In the event that the package management tool got stuck, hence, unable to finish and remove the lock file you may attempt to kill the process. For example this can be accomplished by:

or by using the kill command and previously retrieved PID eg. 3384:

In case that you killed the process manually or are unable to find the process and user holding the lock, the chances are that the previously executed software installation or software upgrade exited prematurely without giving the package management tool the chance to remove the lock.

In this scenario remove the lock file manually:

How to recover from prematurely terminated APT or DPKG installation process

When the installation process is interrupted prematurely your system may be temporarily broken preventing you to perform any additional software installations resulting in an error similar to the one below:

Try the following commands to recover the broken DPKG system:

For an interrupted system upgrade execute: