BSD Games is a Linux port of classic text based games that were/are distributed with BSD systems. The BSD-games package may include up to 40 different executable games. Which ones are included vary slightly based on the distribution.

On Red Hat Enterprise Linux and Red Hat based systems the bsdgames package does not appear to be available in the official repositories or in the Extra Packages for Enterprise Linux (EPEL) Repository. This is the case for all sections of this article where a Red Hat based installation method is not provided. If you know of a good way to get these packages on Red Hat systems, please comment below.

Here are a few highlights of games included with BSD-games

Adventure, also known as Colossal Cave Adventure, is invoked by typing the adventure command into the terminal. It was originally developed in the 1970’s. In this game you control an adventurer’s actions by issuing commands as he seeks out the rumored treasure within the colossal cave. 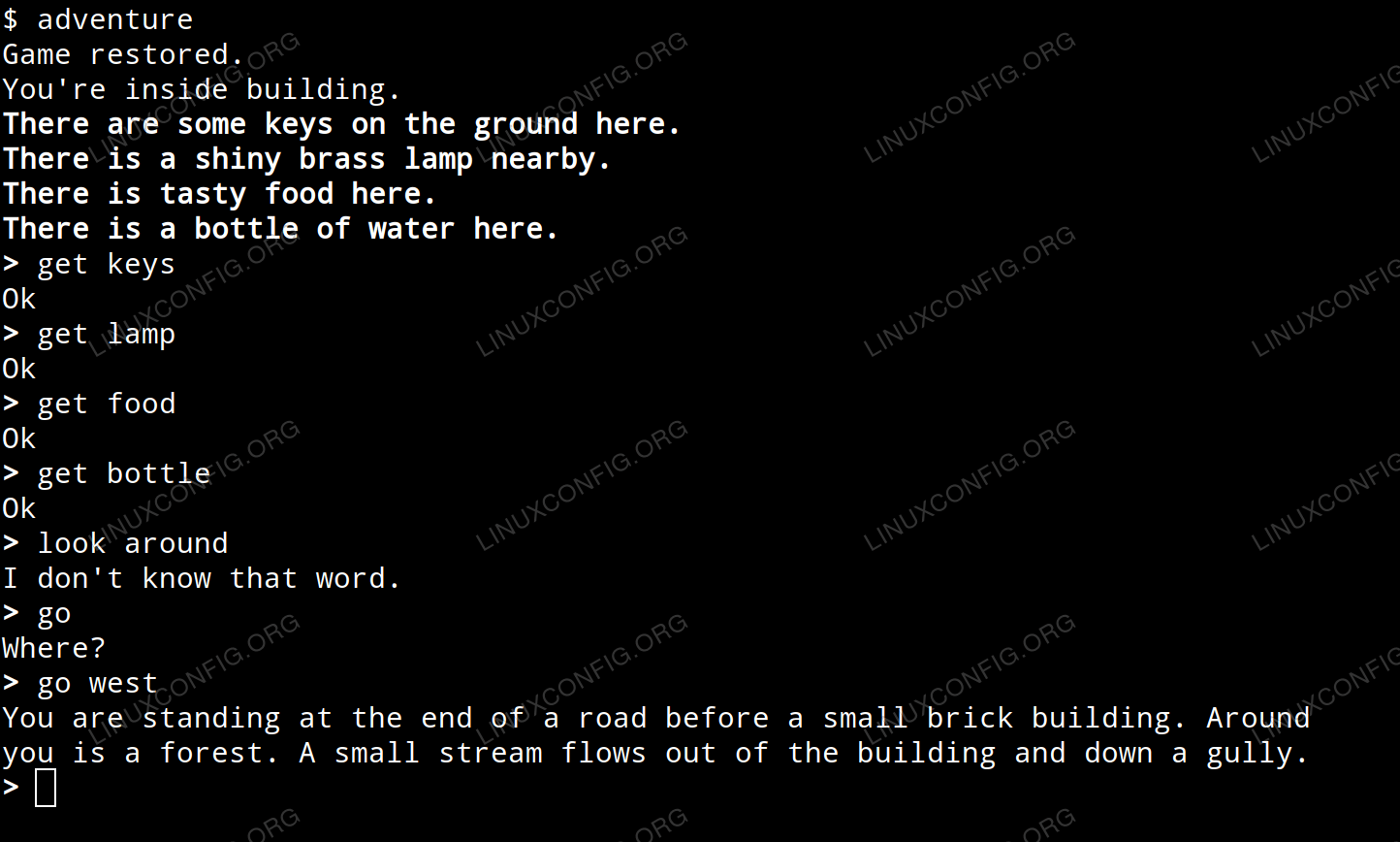 Many of us may remember playing hangman on the blackboard in school during our youth. This is simply a digital text based version of the same game. It is invoked by typing hangman at the terminal. 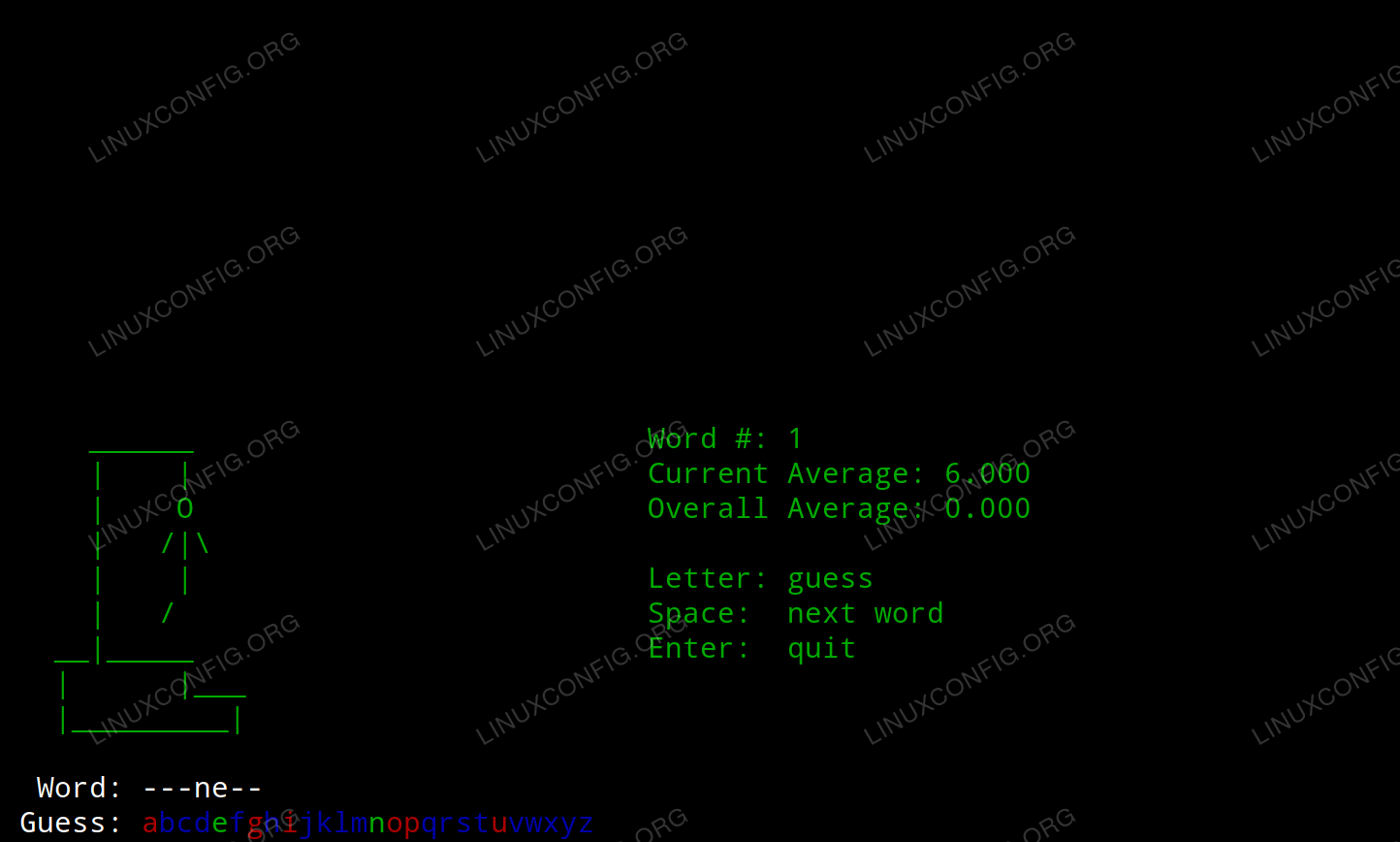 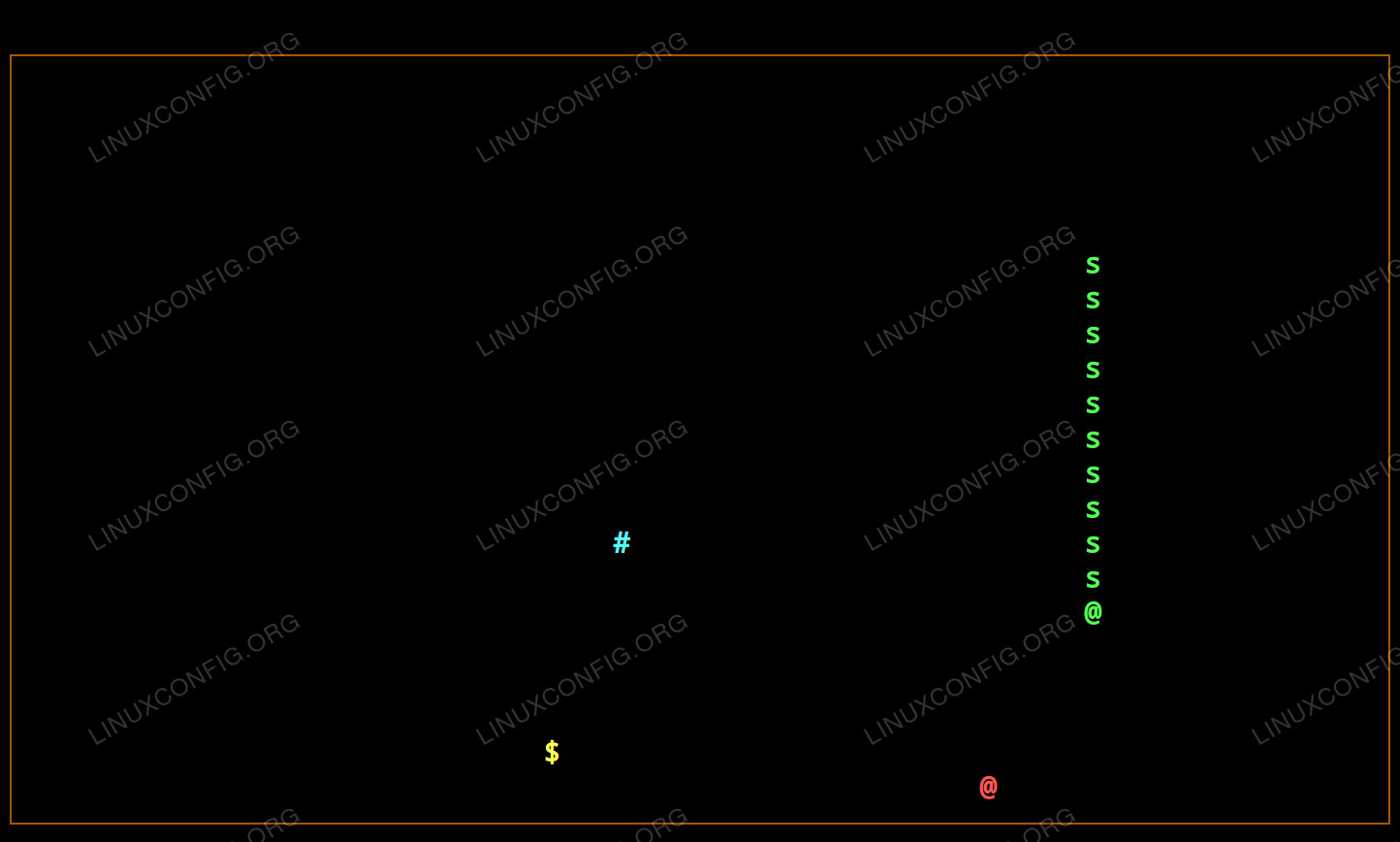 This game, originally created in the 1980’s, started the genre of “roguelike” games. You control a player represented by the @ character, as you crawl through a dungeon collecting treasure and fighting foes. The maps are procedurally generated, which ensures a unique play through each time. The main objective is to obtain the Amulet of Yendor which is located in the dungeon’s lowest level. Although this game is also one of the classic BSD games, it is typically not included in the bsdgames package due to a licensing difference and it must be installed separately. 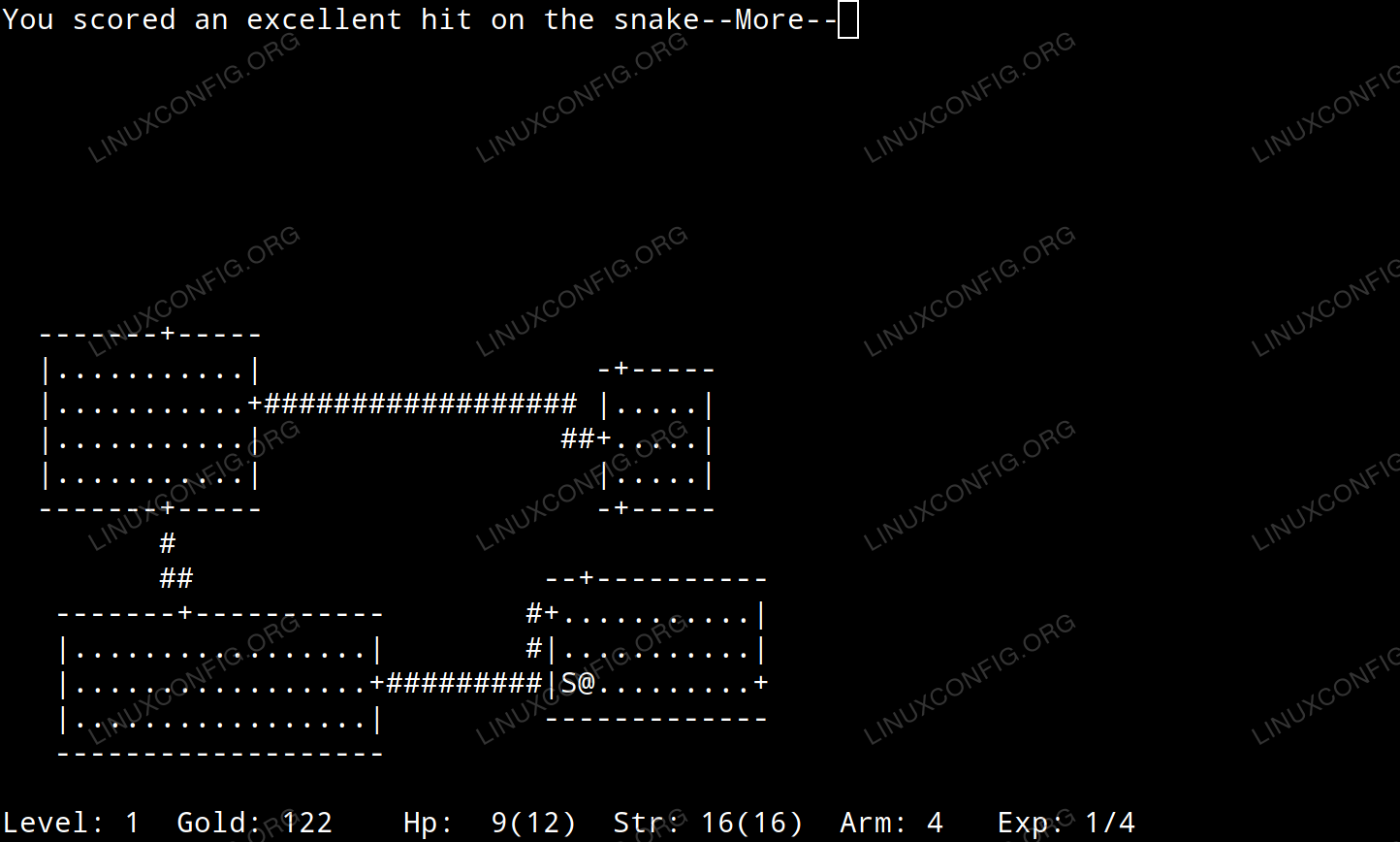 The venerable emacs text editor comes bundled with some games that you can readily launch from within it. Notable ones include tetris, doctor and dunnet.

On Debian/Ubuntu based distros:

On Red Hat based distros:

On Arch based distros:

This is the classic tetris game that we all know and love. Tetris is launched by typing emacs -nw at the terminal and then entering M-x tetris into emacs. This is done by holding the Meta key (typically alt by default) and x then typing tetris and pressing enter. The -nw flag ensures that you are getting the terminal version of emacs rather than the GUI. 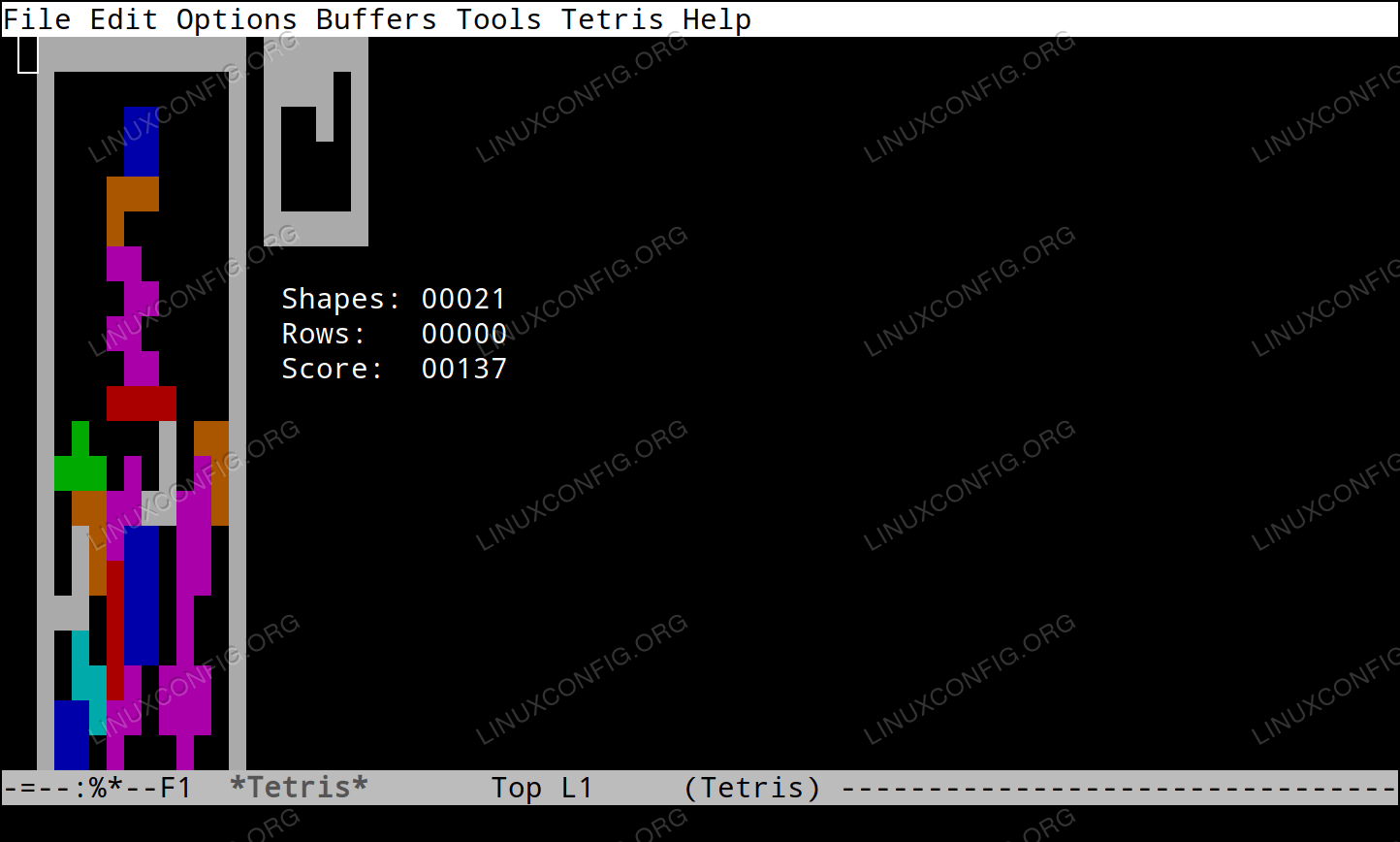 This game lets you talk to a Rogerian psychotherapist who will help you with your problems. It is based on ELIZA, the AI program created at MIT in the 1960s. Doctor is launched by typing emacs -nw at the terminal and then entering M-x doctor into emacs. This is done by holding the Meta key (typically alt by default) and x then typing doctor and pressing enter. 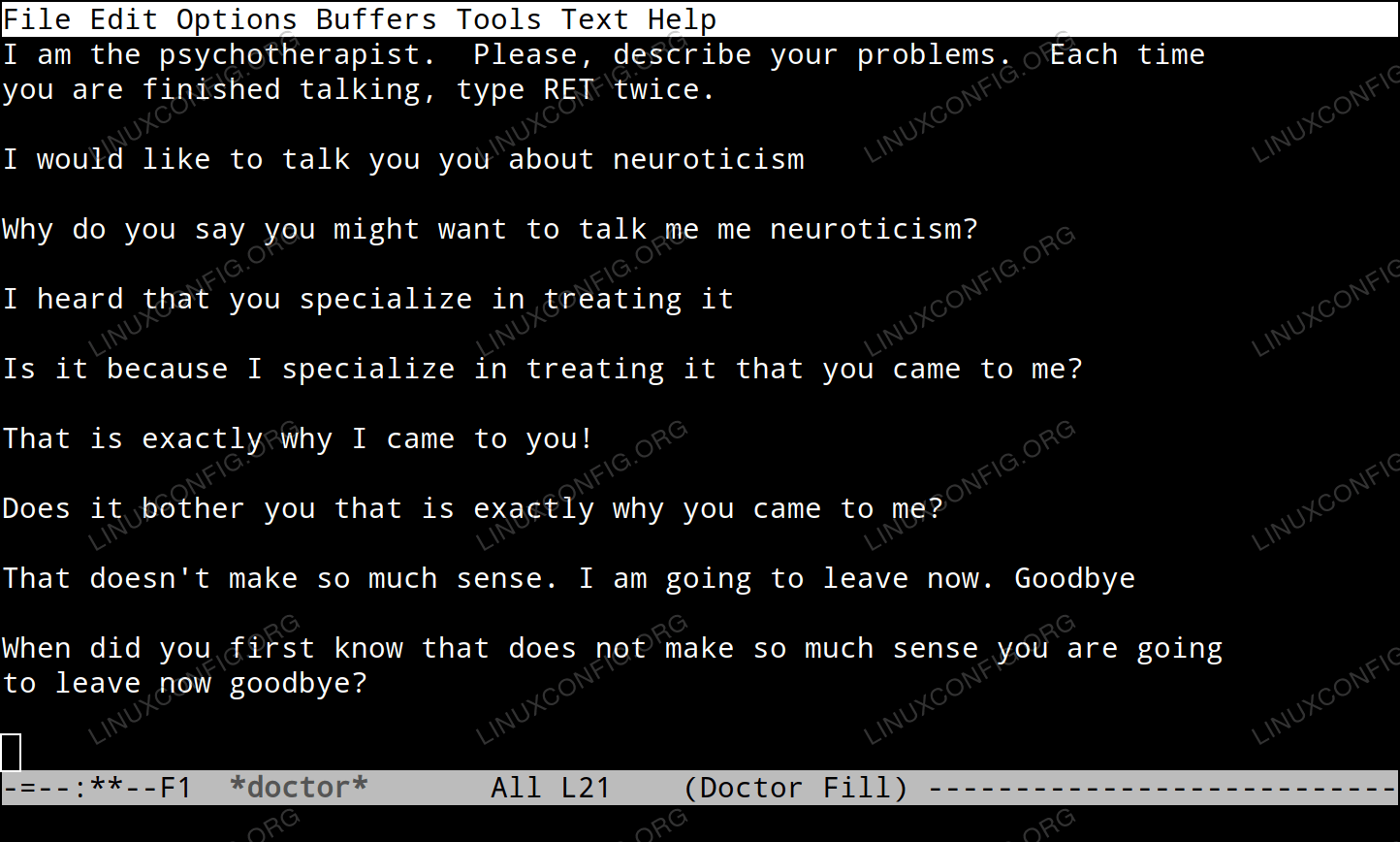 This is another text adventure game where you play by typing commands and the objective is to collect treasure. This may sound a lot like the Adventure game mentioned at the beginning of the article, but this game has a twist. What is that twist you ask? I’m not going to ruin it for you. You need to play it to find out. Dunnet is launched by typing emacs -nw at the terminal and then entering M-x dunnet into emacs. This is done by holding the Meta key (typically alt by default) and x then typing dunnet and pressing enter. 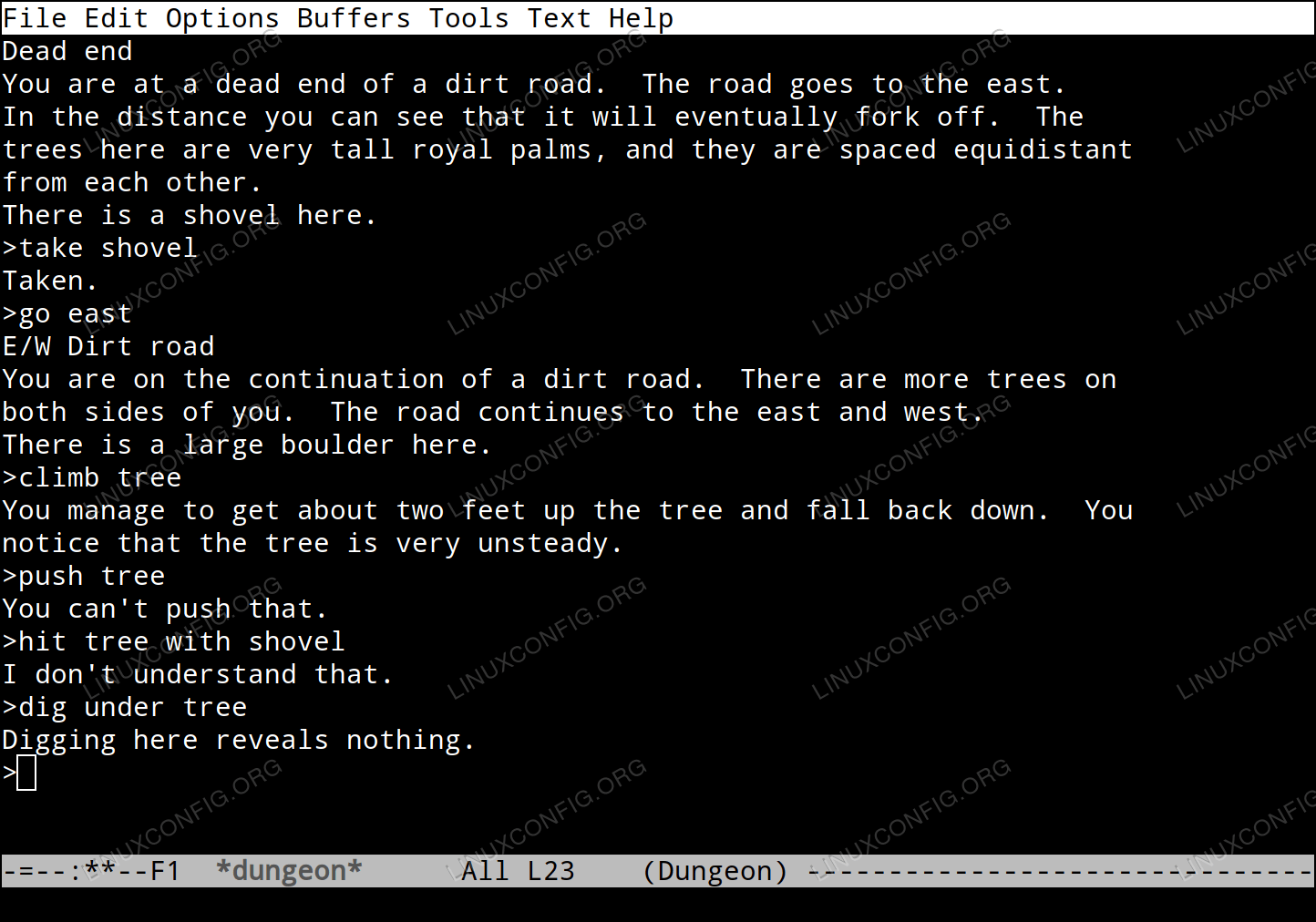 This is an ncurses based clone of the famous 1978 Space Invaders arcade game. You get to control your laser cannon with the arrow keys and you shoot using the space bar. The gameplay experience is pretty true to the original. 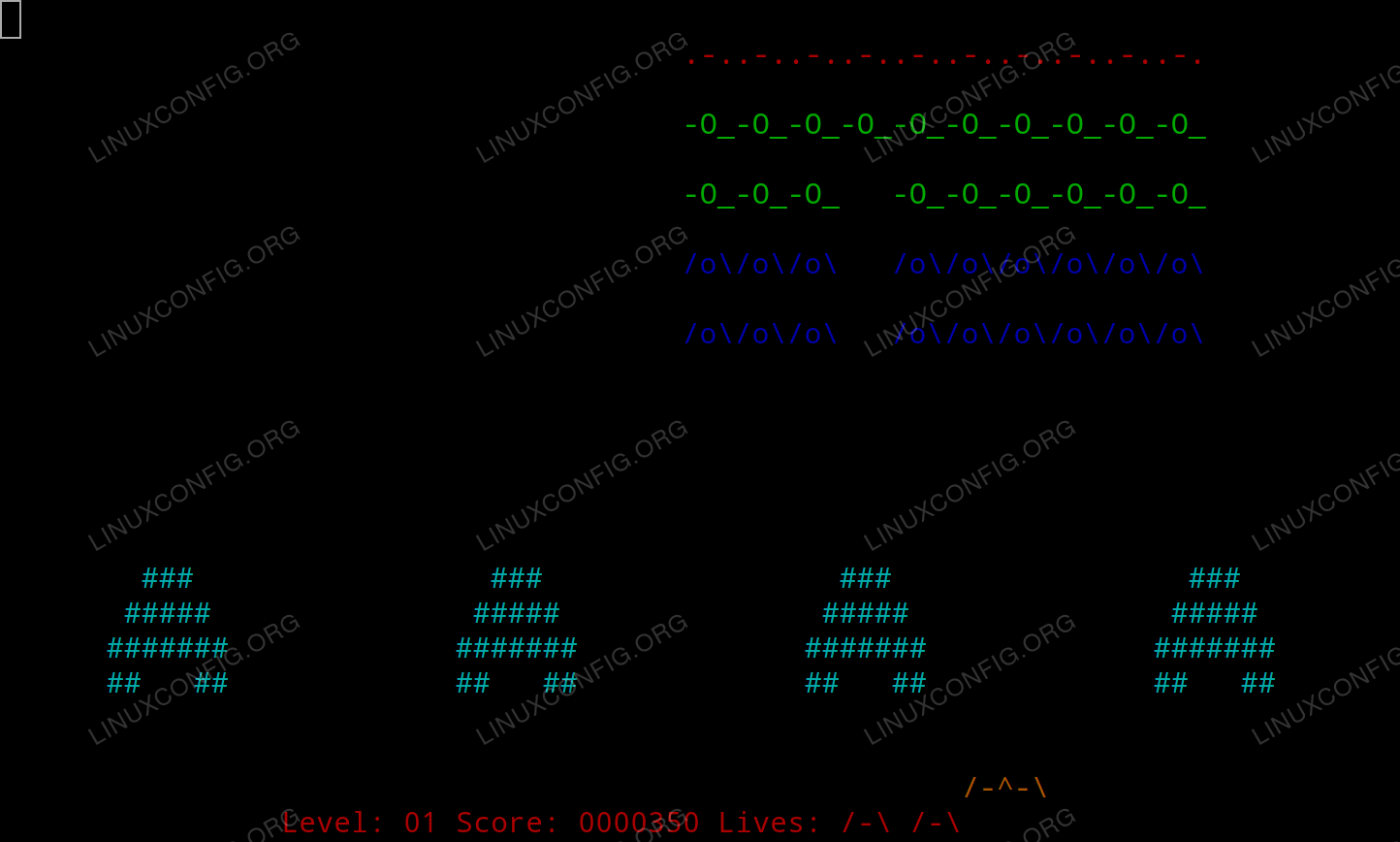 No, this game is not a network hacking simulator. It’s a roguelike game and as such the gameplay is a lot like Rogue. However, Nethack expands greatly on the genre by introducing multiple class options along with a wider array of game mechanics and objects. 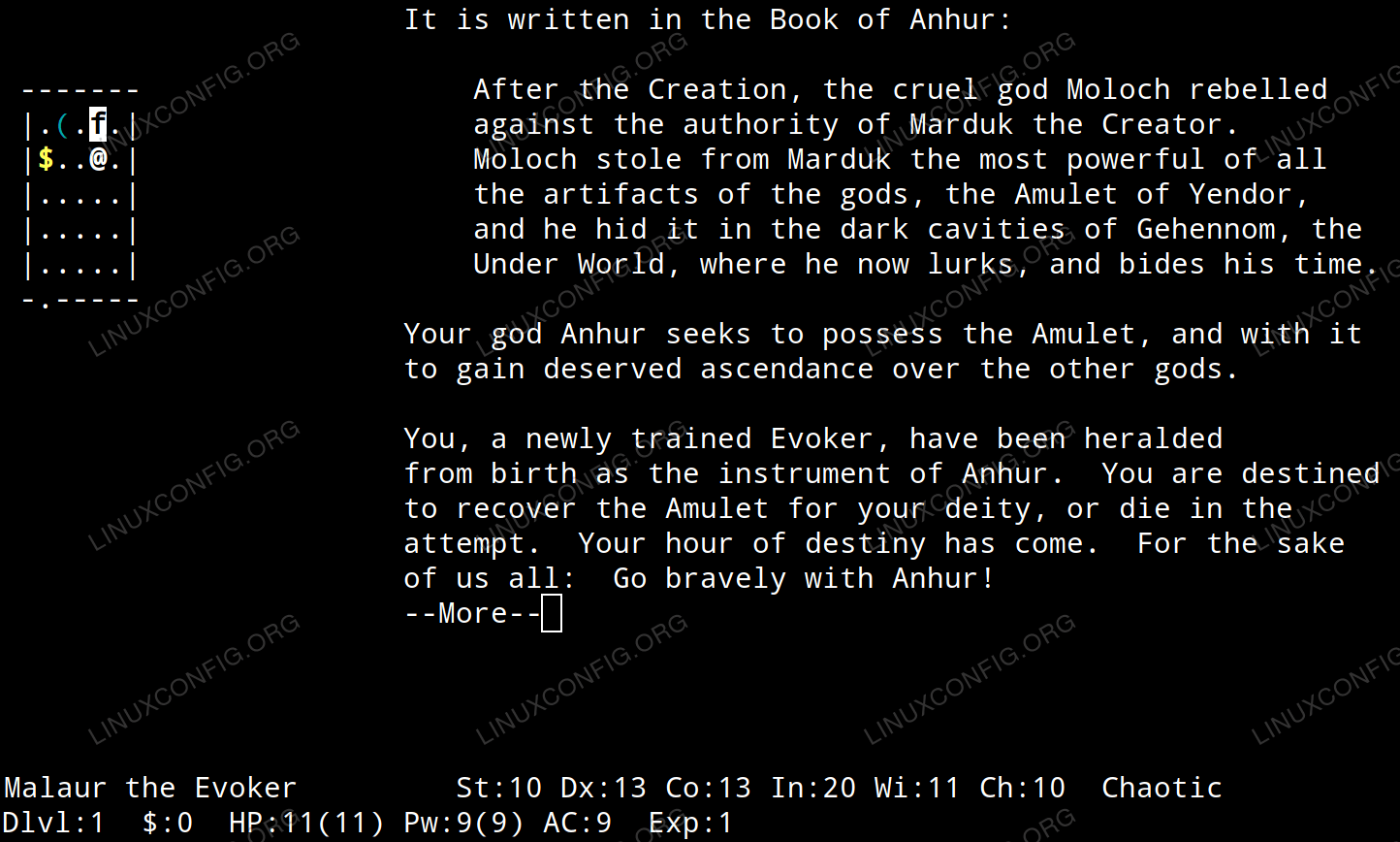 No list of games would be complete without the arcade classic Pacman. This is a console version of Pacman and it’s gameplay is pretty intuitive to anyone who has ever played the original. Pacman is represented by a C, ghosts are represented by &, pellets by . and power pellets by *. The objective is simple; eat the pellets, avoid the ghosts and eat the power pellets to become invincible for a short period of time.

Have you ever wanted to unwrap a terminal command like a fortune cookie and reveal profound truths about life? Now you can with the fortune command. It does exactly what you would expect. Technically this is another BSD game, but it stands apart and is distributed independently. 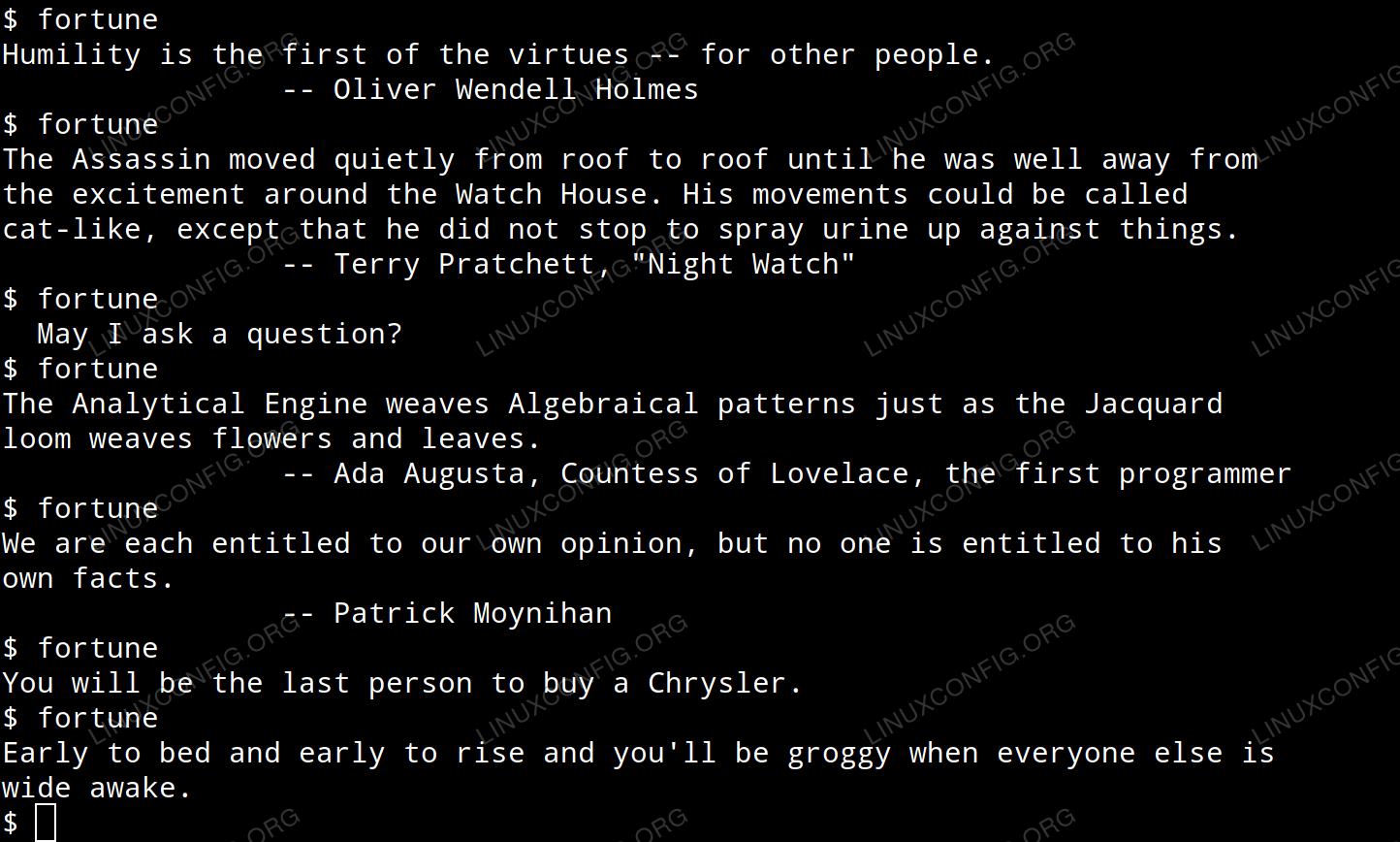 In this article we discussed various terminal based games and how to install them on GNU/Linux. Hopefully, you had the chance to try some of them out and you see how they can be a welcome diversion from the sensory overload of modern mass media. When deciding which distribution is best for playing terminal based games it seems hard to ignore the greater availability of them in the official Debian and Ubuntu repositories.

When it comes to console based games, this article just scratches the tip of the iceberg. In fact, Debian maintains a list of console based games available through their official repos. If this article has sparked an interest then I recommend checking there to get ideas for your next game to play. Also, we would love to hear about your favorite terminal based games in the comments below!