If you have decided to enable a SSL ( Secure Sockets Layer ) protocol on your web server it may be because you would like to extend its functionality to achieve an integrity and confidentiality for a data transferred on unsecured networks. However, this protocol with the combination of PKI ( Public Key Infrastructure ) principles can also along the side of integrity and confidentiality provide authentication between both sides involved in the client-server communication.

This section briefly describes a procedure to create all required certificates using an openssl application. The whole process of issuing openssl certificates is simple. However, in case when a larger amount of issued certificates is required below described procedure would be inadequate, and therefore, I recommend for that case use OpenSSL‘s CA modul. Reader is expected to have a basic knowledge of PKI, and for that reason all steps will be described just briefly. Please follow this link if you wish to refresh your knowledge about Public key infrastructure.

All certificates will be issued by using OpenSSL application and openssl.cnf configuration file. Please save this file into a directory from which you would run all openssl commands. Please note that this configuration file is optional, and we use it just to make the whole process easier.

As a first step you need to generate self-signed certificate CA. Once prompted for value of “Common Name” insert string “Test CA”:

If you have not encountered any complications running the above command you would find in your current directory a file “ca.key” with private key of certificate authority (CA) and ca.cer with its self-signed certificate.

In the next step you need to generate private SSL key for the server:

To generate Certificate Signing Request in PKCS#10 format you would use a following linux command as a common name you can specify its hostname – for example “localhost”.

New file server.key contains server’s private key and file server.cer is a certificate itself. Certificate Signing Request file server.req is not needed any more so it can be removed.

As for the server also for client you need to generate Certificate Signing Request and as a Common Name, I have used string: “Jaroslav Imrich”.

With your self-signed Certificate Authority, issue a client certificate with serial number 101:

File “client.p12” contains a private key and the client’s certificate, therefore files “client.key”, “client.cer” and “client.req” are no longer needed, so these files can be deleted.

Once the server’s private key and certificate are ready, you can begin with SSL configuration of Apache web server. In many cases, this process is comprised of 2 steps – enabling mod_ssl and creating virtual host for port 443/TCP.
Enabling mod_ssl is very easy, all you need to do is to open httpd.conf file and remove comment mark from line:

Just because the server will serve the HTTPS requests on port 443 in is important to enable port 433/TCP in the apaches’s configuration file by adding a line:

Definition of a virtual host can be also defined in “httpd.conf” file and should look as the one below:

Any changes to https.conf file such as the changes above require a web server restart. If you encounter some problems during the restart it is likely that this is due to configuration errors in your https.conf file. The actual error should appear in deamon’s error log.

Testing of a functionality of our new configuration can be done by using a web browser. The first attempt to for connection most certainly displays an error message, that the attempt to verify server’s certificate failed because, the issuer of the certificate is unknown. 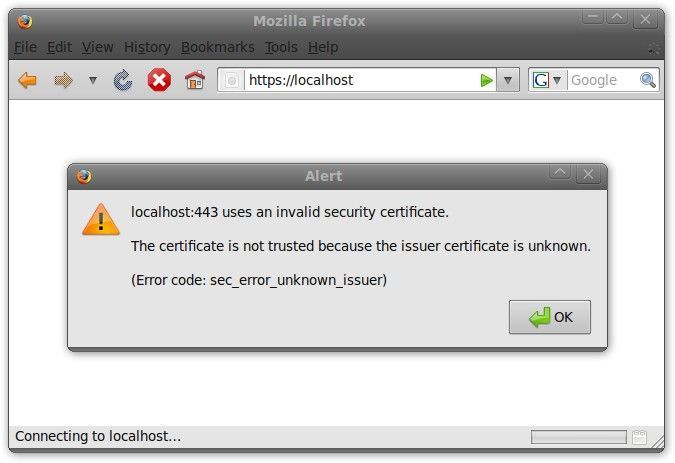 Importing CA’s certificate into the web browser’s using its Certificate manager will solve this problem. To add a certificate into a Mozilla Firefox browser navigate to “Preferences > Advanced > Encryption > View certificates > Authorities” and during the import tick the box which says: “This certificate can identify web sites”.

Next attempt to connect the web server should be successful. 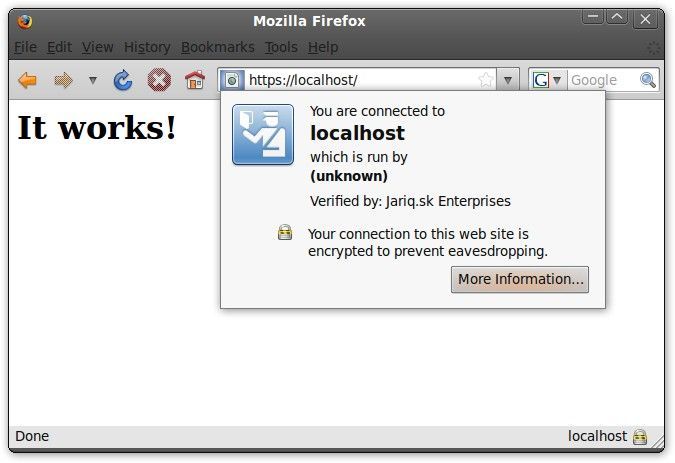 If you have decided that you will require certificate authentication from every client, all you need to do is to add following lines into a virtual host configuration file:

If you try to connect to the SSL server without a client certificate an error message will pop up: 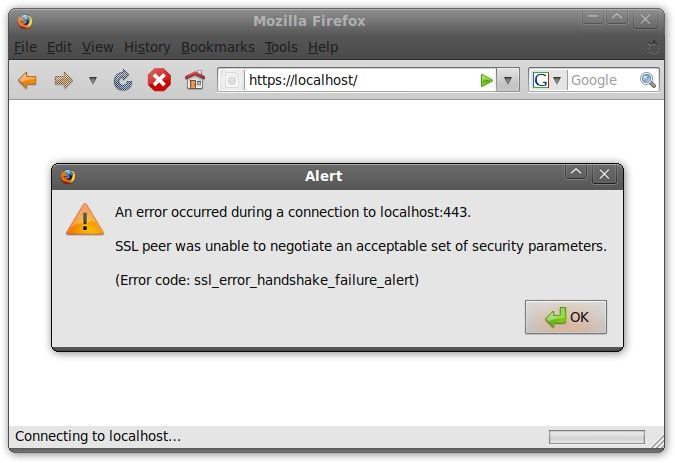 All what needs to be done is to import previously created a client certificate in PKCS#12 form into to firefox’s certificate manager under “Your Certificates” section. This task can be done by navigating to menu then “Preferences > Advanced > Encryption > View certificates > Your certificates”. During the import, you will be asked to enter a password which had been set during the creation of the certificate. Depending on the browser version you use, you may also need to set main password for software token, which is used by the browser to safely store certificates. If you make another attempt to connect to the SSL server, browser will automatically pop-up an appropriate certificate for SSL server authentication. 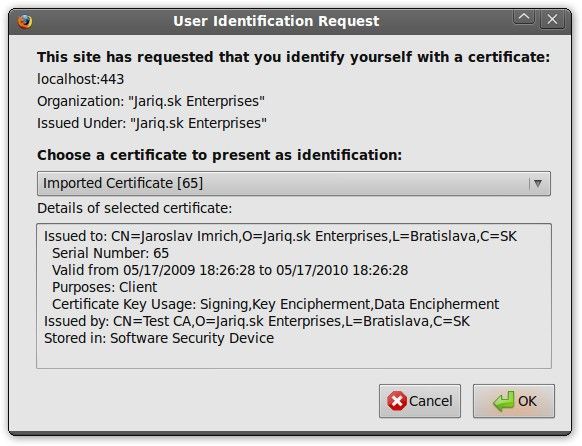 After the selection of a valid certificate, the connection to the SSL server will be granted.

Another advantages of SSL authentication

This operation will take a lot of server’s run-time, and therefore, it is recommended to use this functionality on for files with certain extension or for files within certain directory as it is shown in the following example:

List of the available variables can be found in a module mod_ssl documentation. Accessing variables provided my mod_ssl is language specific. However, for the sake of completeness, here is a sample of CGI script written in perl which will display a “Common Name” of the client:

Here is an output of the script after its execution by the SSL web server: Mod_ssl also supports a use of above mentioned variables directly from the server’s configuration. This way you can restrict an access to some resources for employees of a certain company:

These variables can be also used in conjunction with configuration directive “CustomLog” to enable logging a client’s access details . More information can be found in the official mod_ssl documentation.

If you have not heard about Two-way SSL authentication yet, it is likely that after reading this article you asked yourself why is this type of SSL authentication not used often in the production environment. The answer is simple – cryptic operations used during SSL connections are difficult to process in regard to the web server resources. It is possible to boost web server performance by so called SSL accelerators ( cards containing a processor optimized for cryptic operations). However, in many cases SSL accelerators are more expensive than the server itself and therefore, Two-way SSL authentication is not attractive to use in the web server environment.

openning a port 443 is not required, if a configuration file /etc/apache2/ports.conf has defined an IfModule mod_ssl.c directive:

Enabling ssl module can be done by: