Disk and space management is an essential knowledge of a sysadmin. It is his or her everyday job to handle disk issues. As part of the RHCSA exam preparation, we will learn how to add new space of various types to the system, using the tools provided by RHEL8. We already covered many of these tasks, and in this tutorial we will focus on adding new space without harming the data contained in the system. 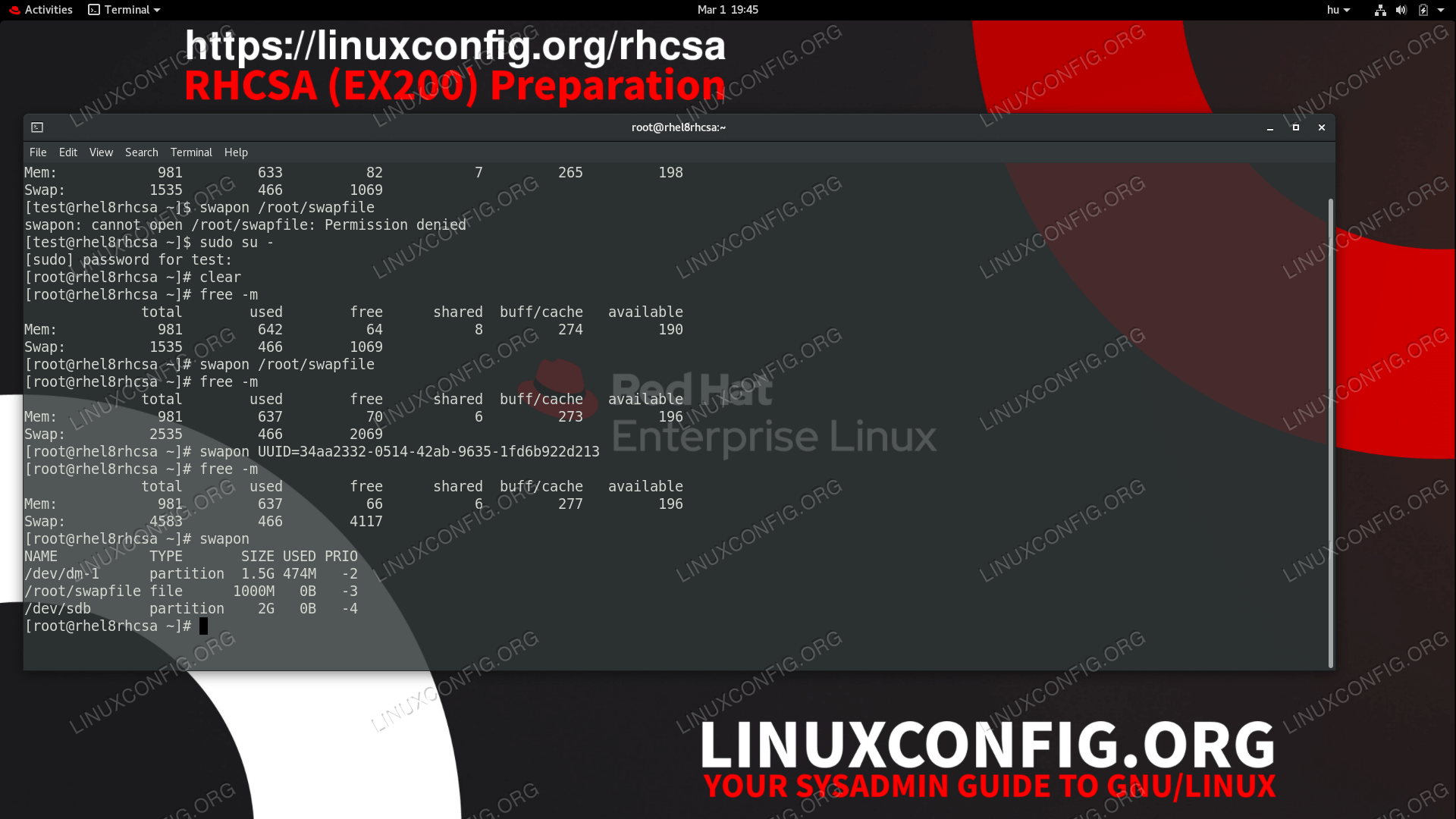 Adding swap space to the system.

How to add new partitions to RHEL8

We already covered the technical steps to create a partition in the partitioning tutorial for RHCSA, so here all that needs to be made clear is to think twice before partitioning. fdisk may ask if you are sure about a modification, but after that it will rewrite the partition table, which may result the data already on disk becomes inaccessible. Always create a backup if the data is needed.

How to add new logical volumes to RHEL8

Creating a new logical volume is covered in the logical volume tutorial for RHCSA. Logical volumes give system storage the flexibility that single disks alone can’t provide. What need to be outlined here is that we need to build our LVM setup from the bottom, and if we need to extend it, we always need to check if we have enough space in the underlying physical volumes.

How to add swap to RHEL8

Swap is a special disk space which is used by the operating system to write memory pages to. Memory contents that are not used for some time can be written to this swap partition, and thus the memory can be used by other programs. If the system is running low on free memory, swap will help solve the problem. But if the system need to use more memory it actually has, intense read/write occurs on the swap partition (which is called “swapping”), which will slow down the overall system, to the point where it becomes less and less responsive.

This is something that should be avoided, even a desktop is hard to use while swapping, and imagine a production server that runs an OLTP database, which suddenly starts swapping. While this intense swapping is a dreaded situation, using the swap space is a good thing in general – it helps run operations faster. If we are about to add more swap space to the system, we have two options: we can create a new swap partition, or we can create a file in the filesystem that will serve as swap space. We will cover both cases.

To create a swap partition, we need an empty partition on one of our disks, without a filesystem. In our test setup we have a 2 GB empty disk seen by the system as /dev/sdb:

Creating a swap partition is only one command away, called mkswap.

As with all disk operations, check twice before proceeding. Reformatting a partition to swap destroys any content it held before. The mkswap utility is providing us the new partition’s UUID, which will be needed for mounting.

Next we’ll create a swapfile in the filesystem, which we’ll also use as swap. Because our test environment uses xfs filesystem, we’ll need to prepare the file using dd.

We copied the default 512 bytes from /dev/zero two million times to the file called “swapfile”, effectively filling the file with zeros to the size of around 1 GB. This file in turn can be used to create swap:

Our initial swap space on the test environment is 1.5 GB:

Which is provided by the device /dev/dm-1:

To make our new swap spaces usable to the system with the swapon command. Running it without arguments provide data of the swap already available:

Adding our swapfile as argument enables the file as swap. In this example the file is in the /root directory, where the command is issued from, so no path need to be specified.

We can turn on the /dev/sdb swap partition by UUID:

And again our swap space is increased:

And the swapon command also shows our new devices:

And with this we have successfully added new swap space to our system. These changes aren’t permanent at this stage, after reboot they will not be recognized as swap. To make use of these swap spaces after reboot, we’ll need to add two entries into the /etc/fstab file that points to these devices, so the system can recognize and mount them at startup.